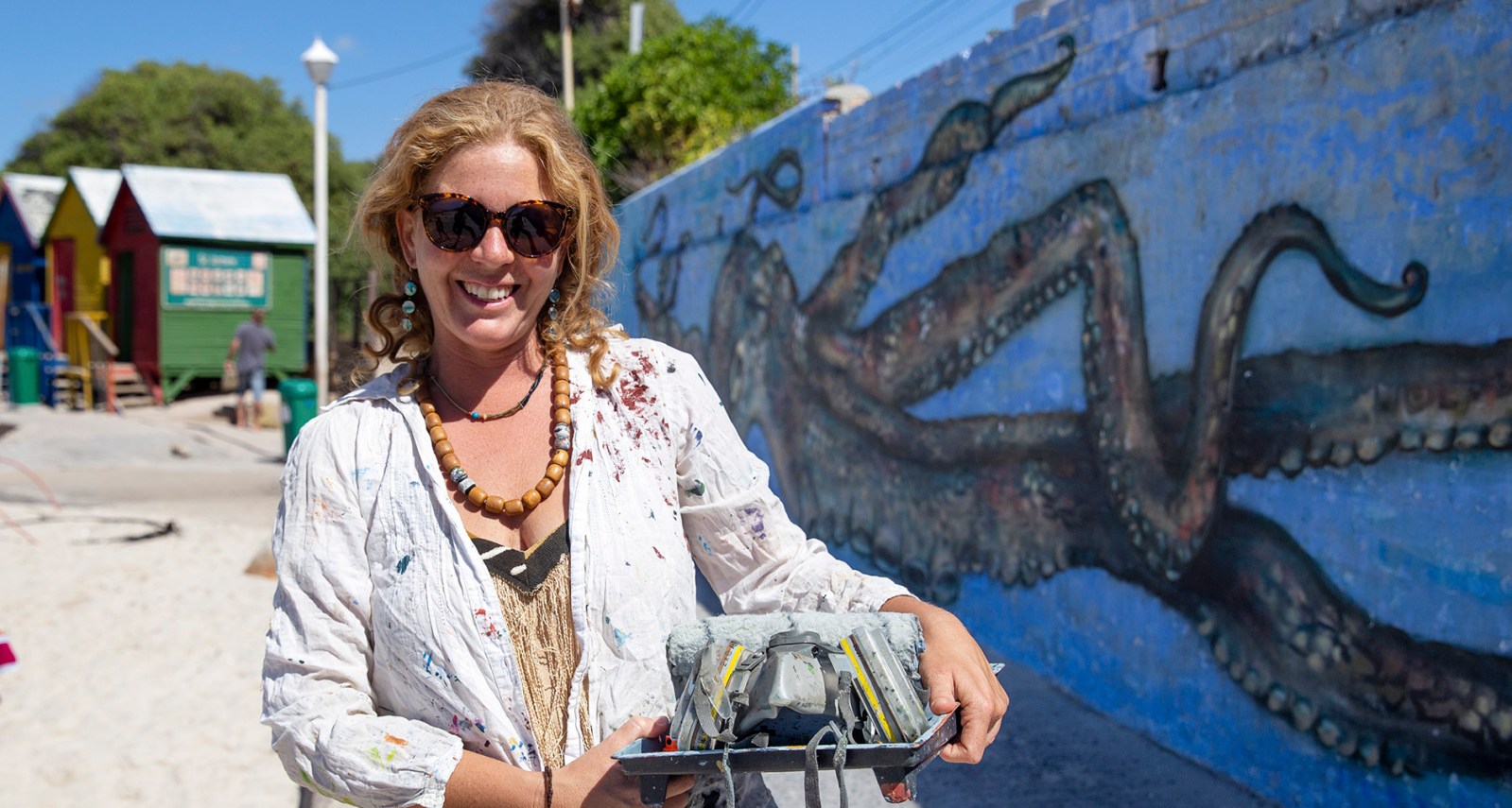 Muizenberg-based artist Claire Homewood has, for the past two years, been painting a large mural by the St James Tidal Pool in the south peninsula. She believes art in public space is an important source of learning.

Called “Meet the Locals” and featuring a series of portraits of sea creatures, Claire Homewood’s (CareCreative) St James mural is playful and colourful, yet conveys a serious message about the importance of our natural environment. During its creation, it has also become a site of conflicting realities.

On one occasion, an actual octopus came out of the water and, after being chased and caught by a human, managed to make its way along the beach, past the wall that displayed its image, and back to the safety of the sea — with a little help from Claire’s crew.

More recently, during the infamously fraught lockdown beach closures, Claire and her team had a run-in with law enforcement. Claire’s process when creating such a mural includes close community engagement and participation, storytelling, and a considered effort to connect with indigenous Khoisan knowledge. To that end, her team invited a traditional chief to bless the mural. As Chief Bi’a Kingsley laid out his things on the beach and started burning imphepho to connect with the ancestors, law enforcement arrived. They wanted people off the “banned” beach.

Claire eventually managed to show her permit on her phone, which the officers had been reluctant to touch due to Covid. In the meantime, a large crowd had gathered and the chief, seizing the opportunity, spoke about the rights to the land in this part of the country that have been taken away from indigenous people. When he was done, he packed up and moved off the beach. According to Claire, they all left on a friendly note with enforcement officials after all.

Not all situations have ended so well for Claire, however. Over time, she has learnt that in addition to the City’s permitting process, smooth painting relies on establishing relationships with local authorities. She underscores that it is a process of learning together, and that it is vital to work with different departments and organisations to have a bigger impact in the long term.

Claire reflects on the current regulatory environment — which, she says, stifles creativity and promotes covering graffiti with grey paint. Yet corporate advertising remains. “Where is our freedom of expression? Where is the right to put our mark in public space?” she asks.

Nevertheless, Claire is also forward-looking about the potential public art holds in our city. Indeed, she recently worked with a group of high school students from Fish Hoek on a project to illustrate the impact of rising sea levels. Her hope is that it will become a platform that sparks conversation around the climate crisis.

She reflects on the radical turn of public attention towards health and safety during the pandemic. While she believes this is understandable, in her view, it let other important issues fall by the wayside.

She would like to see an environment that fosters the creation of public spaces that are vibrant, colourful and hold information about the environment, history and indigenous knowledge. These spaces would enable important conversations, she says. The Fish Hoek mural, for instance, was launched in late April in collaboration with local authorities, the students and some civil society organisations. Claire explains, “The painting is meant to serve as a backdrop or a platform for people to speak about environmental issues, put forward solutions and to show it is important that we focus on this now.”

Lockdown has curtailed what Claire considers vital: human connection. She believes that for this same reason, public space has become ever more important to protect and to rethink – not just as “gentrified, charcoal grey” but as the result of a conversation with people who bring in different perspectives. “It will be amazing to create more public spaces in the city where there are practice walls, spaces, places where conversations can happen. Outdoor art galleries, curated by locals …” she muses.

For Claire, public space is not just an interesting topic to discuss or argue about. In addition to her work relying almost exclusively on the ability to create art there, Claire has a lifestyle that engages fully with this idea. She is involved in her six-year-old daughter’s school where the principle is to learn by doing and by experiencing the outdoors.

In a city with the cultural diversity Cape Town has, “outdoor galleries” could be the perfect recipe to create genuine dialogue, allowing us to co-create our future. It is also true that for this to bring authentic connection, the city would have to overcome its spatial segregation – not a short-term process. In the meantime, we could start by allowing expression and for the walls in our public spaces to tell different stories by residents, not just commercial advertisers. DM/MC