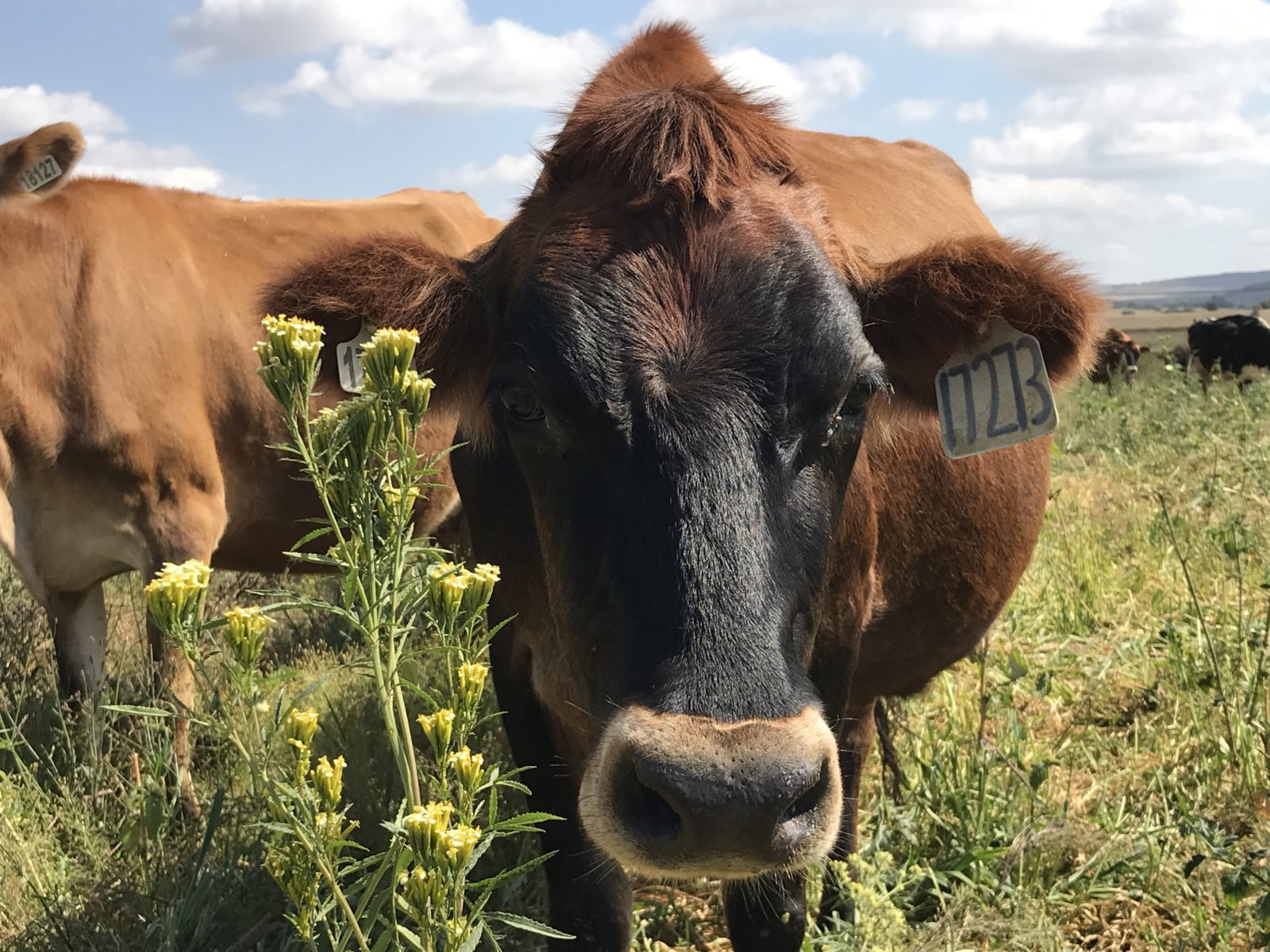 It’s accepted that Brittany produces the world’s greatest butter. In South Africa we have Mooberry. And it’s produced in urban Jozi.

The test is a slice of slightly charred, cooling toast, sourdough if you have it, the best homemade bitter marmalade slathered on, over a generous spreading of butter. The taste of the butter stands out intensely.

If it is very good butter it will seem rich and ever so slightly sour, be utterly delicious. You’ll help yourself to another slice just the same as the last and your memories or imagination will drift over soft, herby meadows of long-lashed, gentle cows, time slowed to the almost standstill of the sun.

If the butter passes that test, it’s probably 100% made with really pure cream and with no preservatives, no additives, from cows that have no growth hormones, stimulants or other chemical stuff like routine antibiotics pumped into them, that graze natural GMO-free pastures that also receive no chemicals. It’s very rare butter. It could well be that of Mooberry, the prime choice of many Jozi and other South African chefs.

A friend and I have often made our own butter, reckoning we were getting better stuff than commercial butter. It did taste better. I used to do mine, shaking just the cream in a Consol jar until the liquid separated from the actual butter, cooling the resultant butter and slicing it excitedly onto hot toast. Since I started with Mooberry butter, I no longer do that. It simply isn’t comparable. A few days ago, I asked the friend what cream she’d used for making her butter. She’d been using a certain supermarket-bought cream, as had I. Of course. It was the cream that hadn’t been the very best, from the start.

Chefs like Mooberry butter because it tastes superior, possibly because of all that purity and the naturally nutritious life of the producers, the cows. The taste of butter doesn’t change with cooking and taste does make one of the most compelling cases for wholly organic and responsible production and farming.

But what if I told you this most desirable goodness of dairy products comes from an urban Jozi dairy? It does seem strange but it’s true. Mooberry has expanded and relocated since its beginning days but they were always urban.

The dairy product of which Mooberry is most proud is not even its delectable butter. But the outstanding butter is principally why I’m here. I’ve never tasted anything like it throughout my own butter appreciation days.

I know it’s accepted that Brittany produces the world’s greatest butter and I intend going there for that, other foods and scenic wandering reasons. Breton cows like Pie Noire and the orange milk producing Froment du Léon are said to be the reason for the distinctive taste of Breton butter.

In South Africa we have Mooberry, where I’m watching glossy, gorgeous piles of butter being pressed in a wet wooden mould, into 250g slabs of a different shape to most of the stuff we know from supermarkets. The shape is simply because of most butter dishes being able to accommodate the width, without cutting any off, Mandy Simon tells me. Should you want 500g, it’s easily made by putting one of these on top of another.

I’ve been trying to see Mandy for years. Before the butter, her story began with the milk. It really started with one cow. She was watching Carte Blanche and quailed to see what constitutes “acceptable levels’’ of impurities in commercially sold milk. It was matter like blood, pus and faeces. Right then and there in North Riding, she decided they needed a cow of their own to produce milk for the then Simon children, of a far more acceptable standard.

The first cow was something of a dud, charging them and behaving strangely, though her milk was good enough, better than commercial milk. The neighbours were already keen to buy milk from Mandy.

Mandy bought another cow, also grass fed and pasture raised even then, who is still with the Mooberry herd. She’s easy to spot, a little dark for a Jersey and is the only one with horns. Mooberry cows are not put down when they start to produce less milk with age. Then two more cows were bought and Mandy was worried in those days that she had too many. The children learned to do the milking. Today the dairy herd consists of 80 cows. The children have grown up.

Today that herd of chiefly Jerseys, with 20% Frieslands, grazes at the pastures side of the business in Hekpoort, where there’s a whole lot more room for separate pastures of oats, mielies and lucerne among the veld herbs, 20 minutes from Kya Sands, where the spotless dairy bottles their milk, produces the butter, all the cheeses, kefir, ghee.

Apart from the butter I’m a great fan of Mooberry’s halloumi, an award winner. There’s no squeak with it but it cooks to creamily firm perfection. The product of which Mandy and so Mooberry is most proud is the very thick yoghurt, not allowed to be called Greek.

I watch the cows moving and cropping easily. It’s an entrancing sound. The sun shines on us and, as Mandy says when volunteers want to work at the farm, that, between milkings, there’s a whole day of nothing to do. It’s just this and the smell of the pasture, the herbs and also the unmistakable aroma of khakibos because there’s no spray used here to keep it down.

I also mention to Mandy that there are butter wrappers I’ve only just started reading but that they have no doubt been like that for a long time, saying that very South African seeming brands, with springbok and protea iconography on the labels are selling “Product of Northern Ireland” imported butter. I’ve been a bit worried about that. I’m sure the butter is okay and must cost very little in Northern Ireland to be landed here at a price competitive with other supermarket butters. But why would we not use our own dairy products? Importing basics from such a long way away is not indicative of carbon cares.

Mandy says South Africa has a shortage of cream. I didn’t know that. She doesn’t sell hers as cream because it all gets used in her butter and other products. I think what worries me is that this foreign butter is also packaged in Northern Ireland in these very South African seeming wrappers and it seems rather obfuscatory by design.

On the other hand, Mooberry’s butter wrapper is straightforward. The salted butter one has, as the only ingredients, cream and salt. I compare this with the usual ingredients list on another salted butter which has three columns under Ingredients, not giving any ingredients as we know them but as Glyceric Carbohydrate and four different kinds of fat under Total Fat, inter alia.

Admiring real Jozi cows in real sunshine on real pasture, I feel a yearning for another slice of that slightly charred sourdough with bitter marmalade and real Mooberry butter. I know what I see here before me is what I’ll get. DM/TGIFood