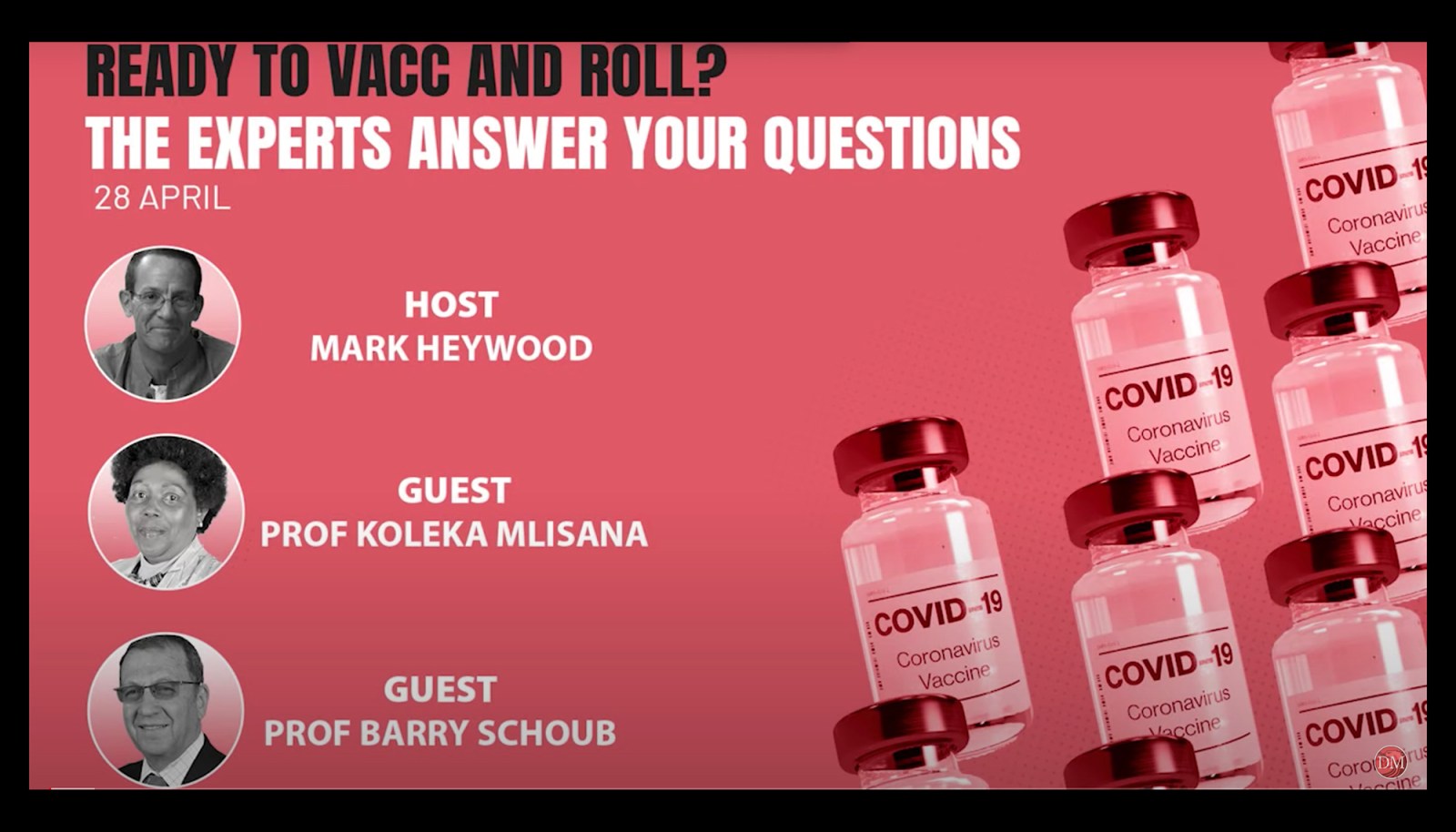 With only a few breakthrough infections noted, researchers are seeing ‘tremendous benefits’ of the Johnson & Johnson vaccine administered to health workers as part of an implementation trial, Professor Barry Schoub said during a webinar on Covid-19 vaccines on Wednesday night.

Researchers are seeing “tremendous benefits” in the group of healthcare workers who have received the Covid-19 vaccine, Professor Barry Schoub said during a Daily Maverick webinar on Wednesday night.

Schoub, a Wits University Professor Emeritus of Virology; and Professor Koleka Mlisana, an executive manager at the National Health Laboratory Service; discussed the roll-out of the Covid-19 vaccine to the general population that is scheduled to start on 17 May. Both serve as advisers to the Minister of Health, Dr Zweli Mkhize.

Maverick Citizen editor Mark Heywood described them as “two of the people in the hot seats”.

On Wednesday Mkhize told the Health Portfolio Committee in Parliament that about 500,000 (out of five million) people over 60 in South African had registered for the vaccine.

Two different Covid-19 vaccines will be used in South Africa. The Pfizer vaccine uses messenger RNA to teach the body to make a spike protein like that of the coronavirus and this then triggers an immune response.

Mlisana said both vaccines are safe and effective.

“People are concerned about the Pfizer and Moderna vaccines because it is new technology – and it is. It will take time for us to see its impact, but the safety data shows there are no safety concerns per se.”

She said most people experience side effects like pain at the injection site, slight muscle aches and joint pain.

“But these are common to most vaccines,” Mlisana said. “They are not significant effects that would cause an alarm.”

She said a few patients had severe allergic reactions to the Pfizer and Johnson & Johnson vaccines and stressed that this is why people should declare allergic problems to the vaccinator.

Mlisana said the Pfizer vaccine was one of the first to be rolled out and was tested before variants of the virus, that generally made it more contagious, emerged.

She said data showed the Pfizer vaccine had a 95% efficacy and Johnson & Johnson’s vaccine a 65% efficacy. “Anything above 60% is great,” she said.

Mlisana said she has been vaccinated. Schoub said he had not yet been vaccinated, but he was keen and would “take whichever one can first go into my arm”.

Schoub said there had been a “tremendous benefit” in the roughly 300,000 healthcare workers that have been vaccinated so far. He said only 20 breakthrough infections had been noted.

“These are people who got infected despite being vaccinated. Immunity only really develops 14 days after the vaccination so it could be that they got infected in those two weeks, but overall we have seen a marked reduction in illness [of health workers],” Schoub said.

He said common side effects are caused by the body’s immune response.

Schoub added that allergic reactions to the vaccine were very rare, at around two to six cases per million doses, while rare blood clotting disorders were at around one in a million doses.

“The third group of side effects that people are worrying about are non-existent. It is this fear that the vaccine will be changing a person’s DNA 10 or 20 years down the line.

“I have discussed it with colleagues overseas and they all agree that the side effects occur within a month of vaccination. We never had a vaccine with a long-term side effect that occurred years or months later,” he said.

Mlisana said several bodies had been set up to monitor the roll-out of the vaccines in South Africa and keep tabs on side effects and possible serious reactions.

Schoub agreed with Heywood that there should be an easily accessible way to report adverse events.

Responding to the decision that the Sisonke implementation study using the Johnson & Johnson vaccine will from now on exclude pregnant and breastfeeding women, Mlisana said it was a way to address the very rare complications that had been found in the US. The use of the Johnson & Johnson vaccine was temporarily halted there and in South Africa after six cases were found where women developed blood clots in the brain while having low platelet counts.

Schoub said laboratory tests, however, showed no risk to pregnant women or their babies.

“In countries with mass vaccination roll-outs many pregnant women got the shot,” Schoub said. “You give flu vaccines to pregnant women. It is just precautionary until we get enough data. I am absolutely sure that it will be recommended for pregnancy,” he said, adding that Covid-19 posed a small but serious risk to pregnant women.

Mlisana said the decision was taken to first vaccinate those above the age of 60 because data showed the majority of people with comorbidities (like high blood pressure and Type 2 diabetes) are 60 and above.

“Age became the most significant variable,” she said.

She added that within a short space of time the roll-out will be extended to those above 40. “That will cover almost 80% of those with comorbidities.”

Mlisana said because it was unknown how long immunity lasted for people who had Covid-19, it was advisable that they too should be vaccinated.

“We don’t know if you will need a vaccine every year. We need time. It might be similar to the flu. We must see first,” she said.

Referring to India, which has been hit by a huge resurgence of the virus despite the roll-out of vaccines, Schoub said it was important to remember that vaccines had two purposes.

“One aim is personal protection and the other is community protection. Personal protection is never 100%. Individuals must still carry on with non-pharmaceutical interventions [wearing masks, social distancing and sanitising hands].

“These epidemics still carry on if 10%-20% of people have been vaccinated. It is only when you come to herd immunity that you stop the circulation of the virus. India probably has less than 10% of its population immunised. You still have that vast gap.

“Even those immunised still need community protection. We see it in European countries. Those with 10-20% vaccination coverage still need severe lockdown. Even the United Kingdom, despite an advanced vaccine programme, still needs restrictions,” Schoub said.

Mlisana said non-pharmaceutical interventions would have to continue for a long time.

“Irrespective of whether you had the infection or the vaccine, you must still make sure that you put your mask on – and do it correctly. A mask is useless if it is worn below the nose. We need to practise social distancing. We must avoid big crowds. We are not there [at herd immunity] yet,” she said.

Schoub said a combination of the right behaviour and the vaccines can “change the personality of the coronavirus”.

“We want it to become trivial. Once we get over this mountain this coronavirus will become one of the causes of the common cold.”

Mlisana said it was important for the Department of Health to tell communities what the plan is. “There are actually huge hopes of 250,000 vaccinations a day.”

Addressing concerns that only 500,000 out of five million people over 60 have registered so far, Schoub said that there were many elderly people who were not computer literate or able to read and write.

“They can go to the vaccination sites where they will be helped,” he added. DM/MC