How drones may become instrumental in SA’s health services 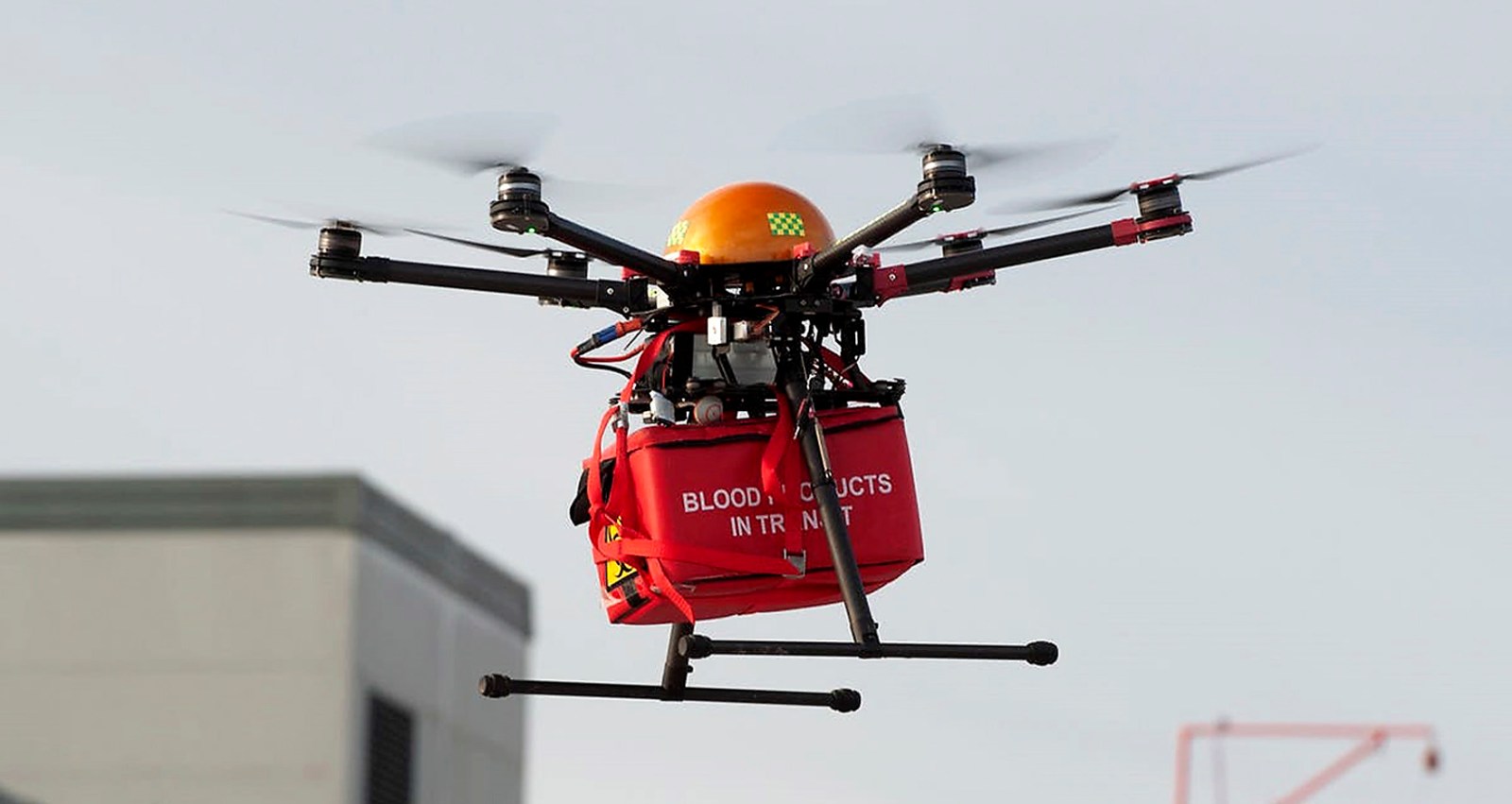 Drones are being used to quickly get donated blood to people in need. (Photo: bbc.com/Wikipedia)

Unmanned Aerial Vehicles have been used for decades for medical supply deliveries and distributing and food aid to disaster-hit areas. Siyabonga Kamnqa looks at where and how drone technology is used in South Africa’s healthcare services.

Unmanned Aerial Vehicles (UAVs), commonly known as drones, have been used for more than two decades to deliver medical supplies and food aid to disaster-hit areas – and new uses for these devices are constantly being found.

In countries such as Rwanda and Ghana, logistics companies like Zipline have developed and currently operate drones that deliver much-needed medical supplies to rural hospitals. Such distribution solutions may also have a role to play in rural parts of South Africa where roads are often poor. But drones can potentially function as much more than just unmanned, flying delivery vehicles.

The South African Medical Research Council (SAMRC) is currently evaluating the use of drone technology in the fight against malaria, says Professor Rajendra Maharaj, Director of the SAMRC’s Office of Malaria Research.

“One of the main objectives is to include larval (the aquatic phase of the mosquito life cycle) control in addition to the use of indoor residual spraying,” he says. “To control the larvae, we need to find the mosquito breeding sites which are small bodies of water, including temporary pools of water such as in roadside ditches and puddles of water around and under vegetation.

“Traditionally this has been done by control staff walking through areas where malaria cases have been identified to identify and geo-locate (using a GPS) them for treatment with insecticides. However, this was not an effective method since people usually walk along roads and pathways whereas the breeding site may be a small puddle under a bush of an indentation in the ground that has filled with water and would not be noticed by an individual not straying from the usual paths,” says Maharaj.

He says that drone technology is now being used to provide an aerial view of the area around a house where a malaria case has been diagnosed.

“Drones can hover over an area and take photographs of breeding sites, geo-locate the breeding sites and potentially apply the insecticide to the water body with mosquitoes breeding in it. This helps to decrease the mosquito populations and therefore limits malaria transmission,” says Maharaj.

He says a second project is underway to use drones to inspect traditional houses for deficiencies in the roofs that could either serve as an entry point for mosquitoes or in the case of flat roofs, identify mosquito breeding sites that contribute to the available pool of mosquito vectors. Changes in identified deficiencies can also impact malaria transmission.

Maharaj says they are running trials in the Ndumo area in the northeast of KwaZulu-Natal “since this area is targeting malaria elimination by 2023”. If the project is successful, the SAMRC plans to introduce drones into the malaria control programmes of KwaZulu-Natal, Limpopo, and Mpumalanga.

Elsewhere, drones are being used to quickly get donated blood to people in need.

In May 2019 the South African National Blood Service (SANBS) launched a new drone-based blood delivery system to help deliver blood to people in remote areas of KwaZulu-Natal and the Eastern Cape. SANBS spokesperson, Khensani Mahlangu says they are planning to roll out the use of drones for blood delivery to the rest of the country.

Mahlangu says the system dubbed ‘Project BloodWing’, is progressing well, and they have made great progress with the testing and piloting. “At the moment, our application is currently with the CAA (Civil Aviation Authority) for review and thereafter, we should receive approval to start flying. SANBS requires an approved license from the CAA to operate drones for its BloodWing Programme,” says Mahlangu.

The CAA is an entity of the Department of Transport that regulates air transport.

Drones to the rescue

The Western Cape Government recently became the first province in South Africa to be allowed to fly drones legally as part of its emergency medical services. After obtaining a Remote Pilot Aircraft Systems Operators Certificate (ROC) last year from the CAA, Western Cape EMS can now fly over public spaces, roads, people, and national key points (with permission from the landowner or its representatives).

“Time is critical in any emergency medical situation and utilising drones when responding to such incidents will minimise the risk of fatalities or the chances of injuries becoming worse,” says Deanna Bessick, EMS spokesperson in the Western Cape.

Western Cape Provincial Health spokesperson Mark van der Heever says that drones are playing a vital role in the province during emergencies such as search and rescue incidents. He says they will continue using drones during incidents such as major emergencies, drownings, mountain rescues, and driving accidents.

“The drones also assist the department with inspections and major events such as shack and mountain fires where there are lots of patients that require assistance,” he says.

Asked about the benefits the province has seen so far, van der Heever says there have been incidents where the in-house Drone Project (DP) team helped with searches during rescue incidents, particularly mountain and sea rescues.

But equally important, he says, drones help locate patients and the DP team then direct the rescue volunteers and EMS officials to the exact location of the patients. “The direction and guidance received by the drone team enable the rescue team to reach the patients timeously,” he says.

In Limpopo, drones have been used to spread Covid-19-related health information. Instead of sending health officials out to get messages to the people, the provincial authorities used drones with loudhailers attached to them.

Limpopo Health Department spokesperson Neil Shikwambana says the drone system had “[born] some positive fruits” in Covid-19 messaging but said the project was only in the Greater Tzaneen Municipality for now. He did not provide details of the “positive fruits” or how the impact of the drone programme was measured.

Greater Tzaneen Municipality spokesperson, Neville Ndlala says that the awareness messages are recorded by the Greater Tzaneen mayor Maripe Mangena in languages that locals can understand. He says the drones play a vital role in spreading Covid-19 messaging – social distancing, staying at home, and regular washing of hands to the residents.

Ndlala says that the drones were also used to monitor hot spots which are identified by the police and the Tzaneen Coronavirus Emergency team. The drones record video of people at places such as malls. The Coronavirus emergency team then assesses the footage for adherence to Covid-19 regulations.

According to Ndlala they used a private contractor, Ntiyiso Aviation Services, for the project and the municipality spent R62,000 for the flying of the three drones for five days. DM/MC