Things that we should find in the ashes: Love Thy Libra...

Things that we should find in the ashes: Love Thy Library 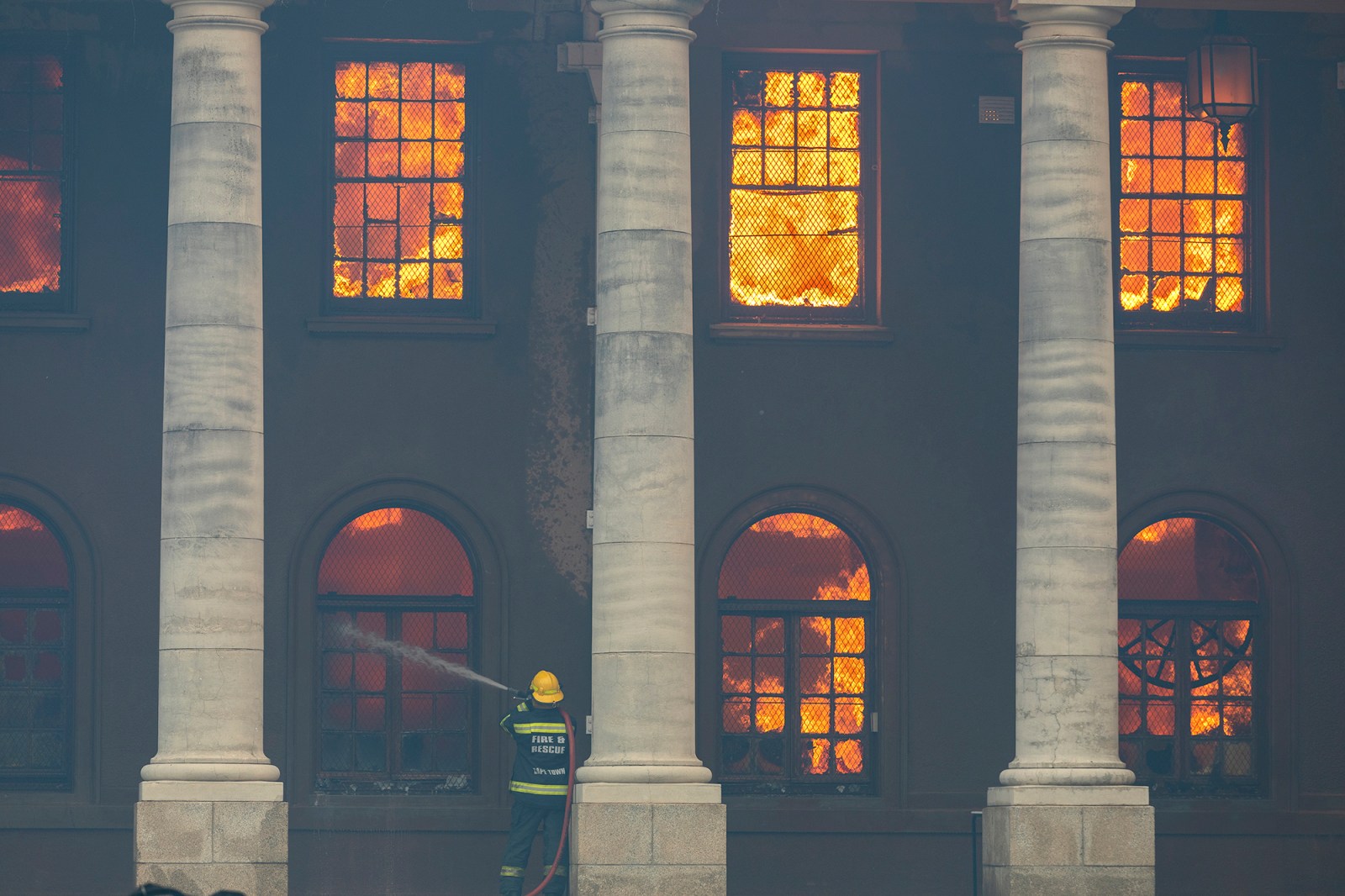 A firefighter battles the blaze that destroyed the nearly 200-year-old Jagger Library on the University of Cape Town campus on 18 April. A fire on the slopes of Table Mountain National Park raged out of control in strong winds and caused extensive damage to UCT and many buildings around the nearly 200-year-old university, founded in 1829. All students were evacuated from campus and several firefighters were injured. (Photo: EPA-EFE / Nic Bothma)

Libraries, by their nature, are sanctuaries. They are designed to feel like safe spaces should feel; orderly, calm, a refuge from the noise and madness of the world, where you’re invited to slow down, to be quiet and to feed your mind.

Of all the destruction the Cape Town fire wreaked this past week, the loss of the Jagger Reading Room at the University of Cape Town (UCT) felt so much more painful because it symbolised something deeper than just words, books, films and documents. Within that pile of rocks was the historical DNA of South Africans; the scars of the past accounted for. Often cynical and heartless, social media lit up with broken heart emojis, prayers for the fire crews and first-hand accounts of what it meant to so many lives.

We don’t yet know the true extent of what was lost but it includes: about 70,000 items of the African Studies published print collection, the African Studies film collection (3,500 DVDs), government documents from SA and the African continent, archives awaiting digitisation, the special collections archive office… The list goes on. Many documents have digital lives, but as e-book sales show, it’s just not the same.

Today we walk around with more information in our pockets, accessible at a touch of a button, than any library can hold – and yet it wasn’t the loss of knowledge that pained us; it was the loss of our memories.

When was the last time you were in a library? Everybody has a library story. As images of the burning building and videos of the hollowed-out hall were circulated, those fortunate enough to have known the place shared their recollections and tried to express how much that library meant to them.

I can’t really remember the last time I was in the Jagger but I do remember the last time I was in a library. It was the library of the National University of Singapore and I was trying to find information about my grandfather. He had been a member of the Malay Regiment during World War II. My three-day dig finally led me to a profoundly boring thesis by a former grad student on the battalion that my grandfather fought in. Right there in the footnote of, maybe, the 64th page were the words:

“From the personal diary of Lt. Alistair MacKenzie.” That was him.

But what diary? I rushed over to the information desk and pointed to the page, asking “Do you have this?”

It was in their special collections. The librarian handed me 10 pages of minute words handwritten by my grandfather in the days he was interred as a prisoner of war in Changi jail. It recounted how he had met my grandmother and why he married her in the chapel of Changi hospital the night before Singapore fell. The following day, they both became prisoners of war.

We never knew that he had written a diary and it was one of the greatest and most profound moments of my mother’s life, when the words that she didn’t know existed, written by the hand of her father who had died long ago, came to life in her hands.

Although my particular library story is an example of one person’s quest to understand their ancestry, with the Jagger Reading Room we’ve lost the stories of our collective ancestors.

Libraries are the custodians of our history and heritage; somewhere among that ashen rubble are accounts of who we are and how we came to be here. UCT Chancellor Dr Precious Moloi-Motsepe wrote after the fire: “When history is destroyed what we erect in its place will represent the beginning of a new era.” And UCT has acknowledged that it is in a unique (and unenviable) position of an unwalked path on this continent – how does it take this tragedy and create what she referred to as the “trailblazing standard” for a reinvention?

More than that, even if they are not razed by fire, how should libraries throughout South Africa reinvent themselves when the public is driven apart again by the communal attention deficit disorder fuelled by individualism and driven by devices, streaming services, podcasts and social media?

Libraries, by their nature, are sanctuaries. They are designed to feel like safe spaces should feel; orderly, calm, a refuge from the noise and madness of the world, where you’re invited to slow down, to be quiet and to feed your mind. Every single word on every single page in every single book is free to the public.

In a country like ours, riddled with social inequality, the role of such a central place is profound. Libraries can no longer merely be institutions that hold on to the past but now need to learn to be places that live and breathe in the future. In many ways, the problem before South African libraries is the same experienced by countless corporations, institutions and even media houses: how do we get people to care, not when it’s gone, but right now?

The answer for me is that libraries should adopt the membership framework. Libraries need to move from the transactional – get your library card, borrow a book, return it late, pay your fee – to the membership model, in which they are the central hub of community, a cornerstone of democracy, thought leadership, social change and connection. It needs to be more than a digital corner or a toddler storytime on Wednesday mornings.

In a country as unequal as ours and with the knowledge and skills gap widening every year, there’s an opportunity for thought leaders to avail themselves of these spaces to share some of their expertise. They can become vibrant think-tanks, social hubs for book launches, mentorship and skills programmes, reading groups and, in an age of remote working, perhaps even that quiet sanctuary to get some work done, safely hidden from yet another Zoom meeting.

It’s not something that UCT or any library in South Africa can do alone. It is the responsibility of all of us as the communities these libraries serve to get involved and to become active participants.

What’s the point of showing how much we care when it’s too late? DM168