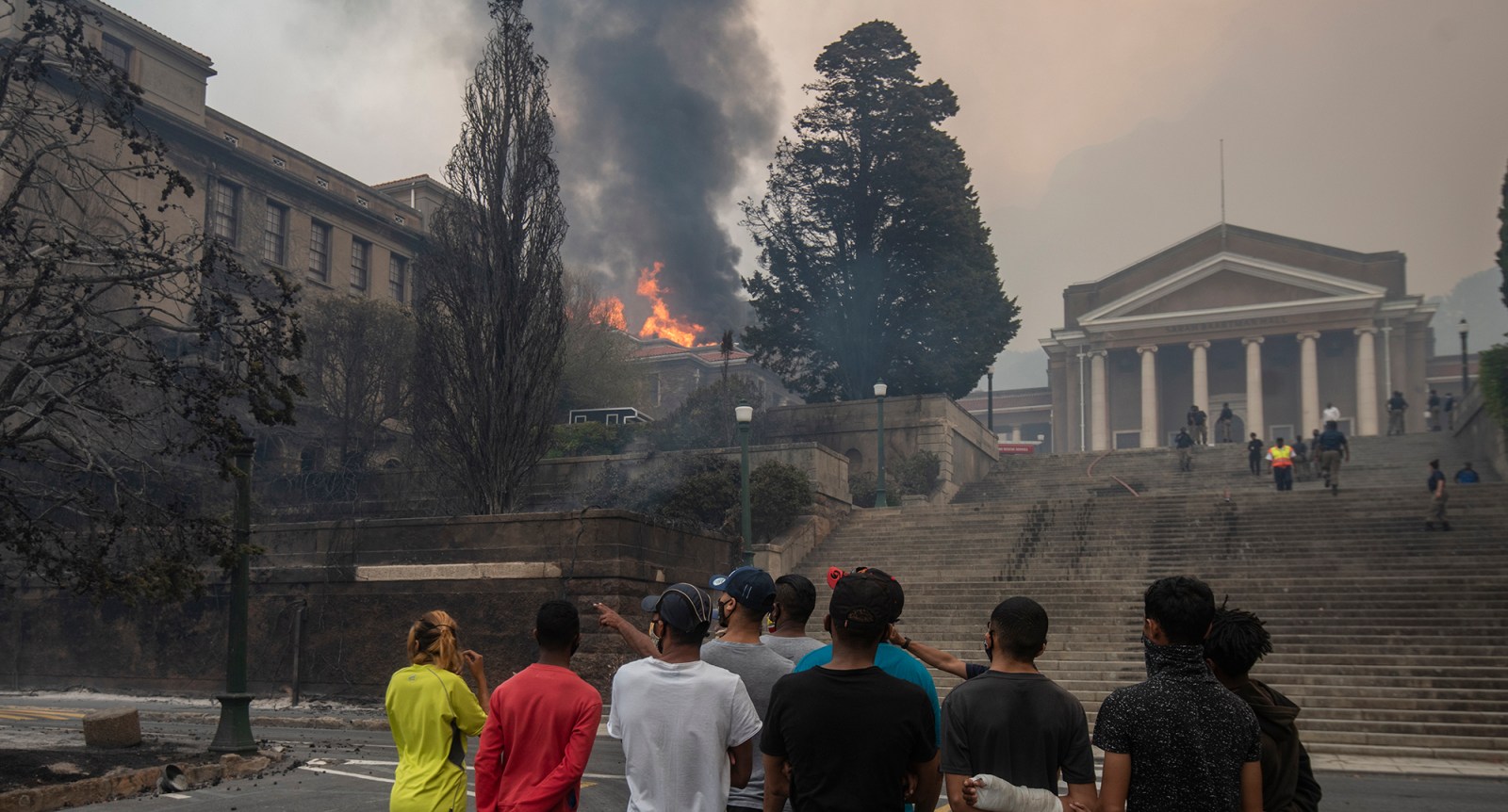 Students watch as a building at the University of Cape Town burns on 18 April 2021.

As the fire which erupted near Rhodes Memorial ravaged parts of UCT’s upper campus, including the Jagger Library, students were evacuated to hotels around Cape Town. UCT suspended the academic programme for Monday and possibly Tuesday.

“A lot of things have happened in my life, but this was the scariest because we’re basically watching things burn down. I know people who’ve lost all their belongings, [and] a part of the [Jagger] Library is gone,” said Xoliswa Tsolo, a final-year UCT student, who lives a stone’s throw away from Cadboll House, the UCT administrative building which was also burnt.

Tsolo was speaking to Daily Maverick outside the UCT Graduate Business School conference centre at the Waterfront. Students who still hadn’t secured accommodation went to the campus and were then assisted with temporary accommodation at hotels.

The fire, which started near Rhodes Memorial at 8.45am on Sunday, spread to UCT’s upper campus, and “completely gutted” the Reading Room at the Jagger Library, said Ujala Satgoor, the executive director of UCT Libraries. By Monday morning, the fire had spread to Vredehoek.

On Sunday morning, Tsolo saw the fire on the mountain. “I didn’t think it was a big deal because they happen so often and it often gets contained, but we didn’t think we’d be evacuated, it’s never been spoken of, it’s never happened,” Tsolo said.

At about 2pm, the warden of the residence sent students messages telling them to evacuate.

“Then it got worse; the smoke was coming closer to the area, it was also getting to that point where it was difficult to breathe. Then we were told to pack our essentials and evacuate,” Tsolo said.

Students were then instructed to go to the Mowbray bus stations, where UCT shuttles transported students to UCT’s Hiddingh Campus in the city, and from there, students went to hotels that UCT had arranged for them.

Tsolo, who is staying at the Premier Hotel in Sea Point, said she was exhausted because she only managed to get a room at 2am.

“We’d all go to a certain hotel, then they’d say they can only take a certain amount of people, then you have to go back on the bus and move to another hotel.”

Sinelizwi Somdaka, a final-year occupational therapy student, said she and other students she’d spoken to were anxious about whether their academic programmes would be suspended for longer.

This comes after the disruption to the academic programmes caused by Covid-19 last year. The prohibition of gatherings and adherence to Covid-19 protocols meant that many higher education institutions had to adjust to online learning.

Despite the many challenges students faced last year, they also had to contend with many of them being financially excluded as millions of people lost their jobs during lockdown. In response to the financial exclusions, the 2021 academic year saw students at higher education institutions protesting.

A number of institutions, including UCT, allowed students with historic debt to register. Now those at UCT are worried about how the fire will affect their studies.

“We’re devastated at the loss of our Special Collections [at the Jagger Library]; it’s things we can’t replace. The resources we had here weren’t just for us at UCT… but they were for the continent [as well]. It’s a huge loss, but we will recover,” said Phakeng.

Phakeng said that they were not yet able to quantify the cost.

Hugh Amoore, the former UCT registrar, said the fire at the Jagger Library would make anyone who loves UCT “feel a sense of loss and anguish”.

“It’s utterly awful, partly because we don’t know yet which contents have been lost. [The fire also] has a huge impact on future scholarship; it’s devastating,” said Amoore.

The Jagger Library is named after John William Jagger, an England-born tycoon and politician, who was a major benefactor of UCT Libraries in the early twentieth century.

According to the UCT website, the “Special Collections boasts some 1,300 discrete archival collections, consisting of original research material relating to the political, social, cultural and economic history of Southern Africa, with a strong focus on the Western Cape. Collections deal with a wide range of subjects, including art, music, education, literature and language, botany, politics and architecture, and include records in all media.”

But not everything was destroyed in the Jagger Library, because “the fire detection system in the library triggered the fire shutters, thereby preventing the spread of the fire to other parts of the library.

“Some of our valuable collections have been lost; however, a full assessment can only be done once the building has been declared safe and we can enter the building,” said Sagtoor. DM

To assist the firefighters, energy bars, energy drinks and light snacks can be dropped off at the Roeland Street Fire Station in central Cape Town.

To help the UCT students who were evacuated, the public can donate essential items and food on the Old Mutual West Campus, 91 Jan Smuts Road, Pinelands. Items must be sealed, in accordance with Covid-19 protocols. Anyone who would like to support the #UCTFire emergency relief fund is urged to please send financial donations to:

Please include your donor name if you so wish, as well as the reference for your donation, e.g. Name Surname, #UCTFire.