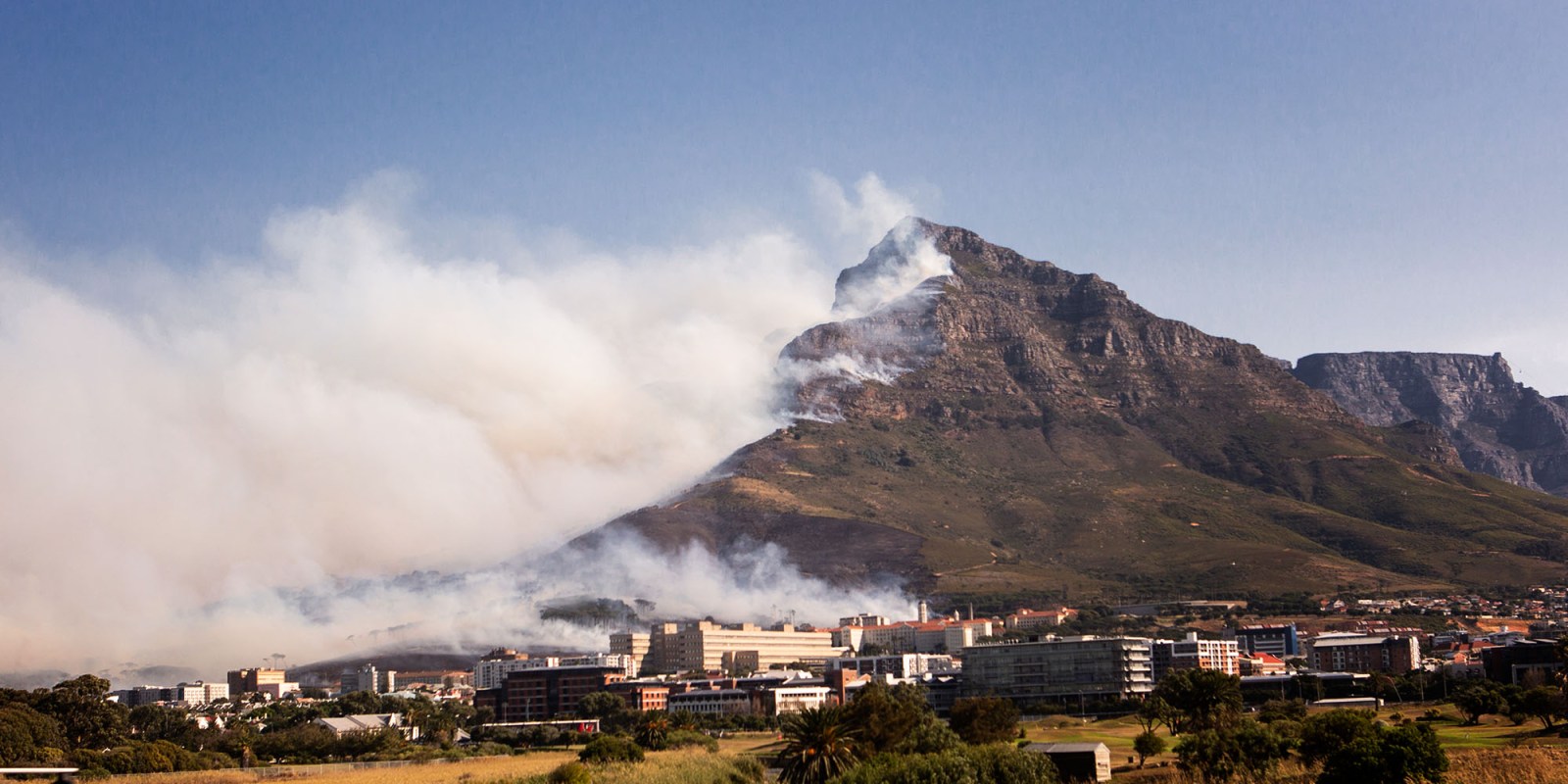 Capetonians grieve the loss of priceless heritage treasures as fire rips across Table Mountain and the University of Cape Town campus.

Efforts to contain the out-of-control wildfire that erupted on Table Mountain on Sunday morning at around 8.45 continued throughout the night.

The unforgiving inferno – suspected by Table Mountain National Park to have been ignited by an unattended vagrant fire – burnt down a restaurant at Rhodes Memorial and damaged multiple buildings at the University of Cape Town (UCT) campus, including the 200-year-old Jagger Library.

Efforts continue to contain a vegetation fire in the mountain above UCT.

The City of Cape Town is engaging in active firefighting efforts along with TMNP and the Volunteer Wildfire Service.

At this stage, UCT has initiated an evacuation of student residences. #CTNews pic.twitter.com/3qtF6CqcXS

NCC Wildfires, the firefighting services contracted to South African National Parks (SANParks), reported that the wildfire had started above Philip Kgosana Drive in the game camp area between UCT and the busy Hospital Bend junction near Groote Schuur Hospital.

Tearing up the mountain’s slopes towards Rhodes Memorial, it destroyed the iconic memorial restaurant, and then headed towards UCT’s upper campus where boarding students were evacuated to emergency accommodation.

Huge plumes of smoke blanketed parts of the southern suburbs and drifted into the Cape Town City Bowl.

From about 11.30am, an orange haze smothered parts of Rondebosch, Mowbray and Newlands, car headlights cutting through the gloom. Ash rained down from the sky, only to be whipped back into the air by strong gusts of wind.

Cars, heaving with bird cages, small pieces of furniture and suitcases, idled in congested traffic as residents fled their homes. Students, holding belongings, clustered on pavements in Rondebosch and Mowbray.

Property including private homes, Rhodes Memorial restaurant and historical structures such as the Mostert’s Hill windmill have been damaged. #CTNews pic.twitter.com/O2VLTKP9x5

“Four helicopters continue to water-bomb the fire lines and teams from the City of Cape Town, Working on Fire and SANParks” were working “non-stop to bring the fire under control”, he said.

Between 150 and 200 firefighters were on the fire line. Later, an additional firefighter was injured and taken to hospital.

“Full damage reports remained a work in progress”, while active firefighting efforts were being prioritised.

“The public is urged to avoid the area and allow the authorities to do their work. The city has not called on any residents to evacuate,” Bredell said. “The public will be alerted immediately should the situation change and any evacuation be needed.”

The human element aside, natural fynbos blazes should ideally ignite, on average, every 15 years or so as a result of dry, hot, windy conditions interacting with mature, indigenous vegetation.

However, Table Mountain National Park noted that an “initial investigation” into the Rhodes Memorial fire had been done, and this “surmised that the origin of the fire is from a vacated vagrant fire”.

Several factors contributed to the fire’s rapid spread towards Rhodes Memorial, the park noted: blistering temperatures of up to 36°C conspired with an extreme fire-danger index that tipped into the red zone.

“The fire created its own wind that further increased the rate of spread,” the park said. “The excessive amount of smoke and related updrafts made it impossible for the aerial support to slow the rate of spread.”

The park conceded that “one of the major contributors to the rapid rate of spread was the very old pine trees and their debris”.

Alien vegetation is both a fire and an ecological risk. UCT flora expert Tony Verboom, an associate professor, told Daily Maverick in December that human-caused fires exaggerated this weedy effect “by upsetting the natural competitive hierarchies and generating gaps that provide invasive weeds with an entry point”.

Thick bushes, watercourses and public drinking points on the mountain’s lower slopes tend to be a haven for illegal campers, driven into such spaces by poverty, homelessness and hunger. Shallow, overhanging caves, set a considerable distance from the urban edge, tend to attract church groups carrying out fire ceremonies.

Fanned by a raging southeaster, Deer Park’s “Halloween fire” on 31 October was also traced to illegal campfires. To contain the inferno, which singed 50 hectares on the mountain’s frontal slopes, it would take 16 fire trucks heaving with up to 6,000 litres of water per tank, plus crews from across the firefighting spectrum: city, park and volunteer corps.

As for the previous summer season over 2019/20, there were 108 fires in the park, according to fire-investigation data seen by Daily Maverick.

The majority of these blazes – nearly 60% – were associated with fires kindled for cooking, heating and socialising. In a few cases, arson looked to be the cause. Additionally, the red wedge of the pie chart attributed 32% to “malicious” origins; some 9% were sparked by “negligence”. Much of it started over summer weekends on the front of Table Mountain as well as adjacent Lion’s Head and Signal Hill; crews contained close on 90% of fires within 90 minutes.

“A lot of vagrants come in during the night, or late in the afternoon,” explained Philip Prins, fire manager for Table Mountain National Park. “They move from the city into the park and, early the following morning, they move from the park back towards the city, and so it continues.”

Meanwhile, all academic activities at UCT were suspended for Monday and Tuesday.

“We will assess the situation and provide further updates before midday on Tuesday,” UCT Vice-Chancellor Mamokgethi Phakeng said on Sunday evening. “The safety of students and staff is paramount. For safety reasons, campus will be locked down and no one, other than emergency services, will be allowed access. We are all anxious about the extent of the damage to the Rondebosch campus. We will provide updates as soon as we are able to do so.”

Efforts continue to contain a vegetation fire in the mountain above UCT.

The City of Cape Town is engaging in active firefighting efforts along with TMNP and the Volunteer Wildfire Service.

At this stage, UCT has initiated an evacuation of student residences. #CTNews pic.twitter.com/3qtF6CqcXS

As the damage is assessed in coming days, the emotional impact for many will linger.

Kylie Hatton, UCT communication and marketing director, told Daily Maverick: “It is devastating watching buildings that are my friends going up in flames.” DM/OBP

Energy bars, energy drinks and light snacks for firefighters can be dropped off at Roeland Street Fire Station in central Cape Town.

The public can donate essential items and food to students at Old Mutual West Campus, 91 Jan Smuts Road, Pinelands, Cape Town. Items must be sealed, in accordance with Covid-19 protocols. Financial donations can be made to (donor names can be included as references):