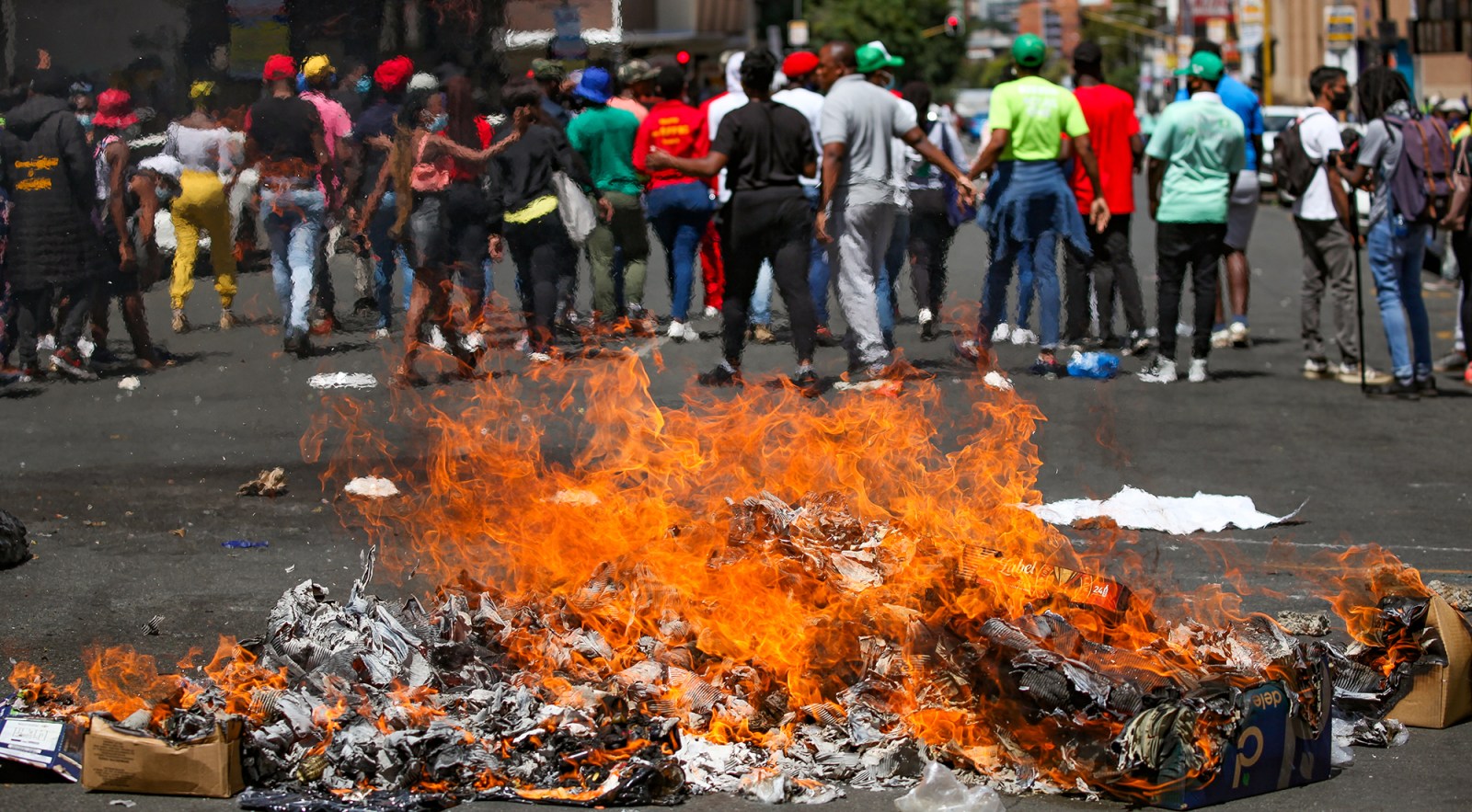 Every year, students who deserve to study at university but can’t afford it are excluded. Youth movements protest, universities and the state make stop-gap concessions and the cycle repeats while the system largely remains unchanged. We look at some of the key questions in tertiary funding.

Historical debt refers to the outstanding tuition fees that students owe to universities.

A sectoral analysis from 2019 found students owed universities almost R10-billion, calculated after the Department of Higher Education and Training had paid almost R1-billion to settle debts incurred by more than 50,000 students funded by the National Student Financial Aid Scheme (NSFAS).

Students have called for this debt to be waived or put on ice.

Multiple institution leaders have said that historical debt has increased substantially in recent years and is likely to continue increasing while the economic effects of Covid-19 continue to take their toll.

Wits students reportedly owed the institution R405-million in 2016 — that ballooned to R1.06-billion in 2020, with the university’s provision for bad debt increasing from R154-million to R558-million.

“It is likely that the Covid-19 pandemic has left families in financial difficulties and this, in turn, may have affected the number of students who are facing this difficulty.

“But this is a phenomenon that has been experienced at the historically disadvantaged institutions for 20 years or more. There is no question that we need a new student funding policy process that addresses this issue sustainably,” said Universities South Africa CEO Prof Ahmed Bawa.

Fee-paying students from the so-called “missing middle” are the worst off and reportedly account for much of the debt. They don’t qualify for NSFAS, but don’t make enough to comfortably pay their fees. Some NSFAS-funded students who haven’t completed their studies in the designated period are also lumped with debts.

Universities often block indebted students from reregistering to continue their studies, regardless of their performance. Students and their elected leaders often then turn to protest, demanding institutions scrap the debt, allow students to register regardless, or for the government to intervene and fund the debt.

The tertiary funding model is broken and students have long been excluded due to their inability to pay their debts.

Bawa outlined three challenges: the subsidies-per-student that the state pays universities have been declining for more than a decade; there’s no national funding programme for students who don’t qualify for NSFAS, capped at a household income of R350,000, and there have been repeated cuts to research funding.

The result is that cash-strapped universities implement fee increases each year and chase students who haven’t paid, or put obstacles in place to pressure students to pay their debts.

“Ignore the problem and many of our public universities will simply collapse. It is as simple and straightforward as that,” wrote former UFS vice-chancellor Jonathan Jansen on the debt issue.

“To even gain 10% of outstanding fees means adding millions to the coffers. Letters of demand are issued, debt collectors are employed and access to academic results or certificates are denied — until you pay up.

“University administrators know there is no realistic way of recouping most of the outstanding funds, but it is the marginal gains that keep the practice of collection and exclusion going from one financial year to the next,” he continued.

In a briefing this week, UFS’ Vice-Chancellor Prof Francis Peterson said the university could not allow rising debt levels to continue, and while institutions are looking to the state to intervene, that’s unlikely, meaning the debt collection department will continue to play a prominent role.

Bawa said, “In the context that there is unlikely to be any injection of support from government, each university will have to work with individual students to understand how best to address their financial exclusion.”

UFS is allowing indebted NSFAS-funded students to register, while asking other students with debt of up to R20,000 to pay at least R2,050. Or, if you’re a final-year student at UFS without NSFAS funding and have up to R25,000 of debt, you can register, provisionally.

The situation varies university by university, but they’re all complicated and expensive, if not now, then down the line.

Such temporary measures will allow more students to reregister this year, but the same situation will play itself out again, unless the state intervenes.

Higher Education Minister Blade Nzimande said this week the state couldn’t afford to clear fee-paying students’ debt. His deputy, Buti Manamela, said the debt crisis was unsustainable and the state would work on a plan over the next three months.

There is a large number of university organisations and civil society initiatives raising millions to help indebted students continue studying, but they don’t solve the key issue of deserving students repeatedly falling through the gaps and being denied a chance to finish their studies due to a lack of finances.

Didn’t Zuma’s free education announcement solve all of this?

On the eve of the ANC’s 2017 elective conference, former president Jacob Zuma announced the state would provide free higher education to the poor and working class.

Students from households with an income of up to R350,000 would now qualify for NSFAS, up from around R120,000, and funding would be in the form of bursaries rather than loans. The state would also pay the historical debt for some students previously funded by NSFAS.

In his 2018 Budget speech, then finance minister Malusi Gigaba allocated an extra R57-billion to higher education to cover the new policy, due to be implemented incrementally at a significant cost to the state.

Unsurprisingly, NSFAS received a record number of applications for funding in 2021 — about 800,000.

In his February Budget speech, Finance Minister Tito Mboweni significantly cut the NSFAS budget, after NSFAS had already announced that it wouldn’t fund certain qualifications for new students or most secondary or postgraduate qualifications.

Facing budgetary constraints, NSFAS had not told many first-year students whether their funding applications had been approved to study in 2021. The academic year was beginning and many first-time tertiary students didn’t know if they could attend classes or not.

In its letter to Nzimande last week, the SA Union of Students, composed of SRC leaders across the country, demanded: “Allocation of NSFAS funding for first-time entering students (FTENs) or new students. All first-years must be unblocked for registration whilst government is still resolving the funding matters.”

Weeks after Mboweni’s Budget speech, the state has now committed to reinstating its NSFAS cuts, meaning first-year students will be funded. This will cost the state R6-billion in 2021 — and it has to find R18-billion over three years.

While many first-years finally know they’ll be funded, in the long term the promise of “free education” remains under threat as the government balances its constrained finances with the reality that many more students qualify for funding then there are funds for or university seats available.

In the short term, students can push for universities to allow all indebted students to register while they and vice-chancellors pressure the state to cover some of their historical debt, which, unfortunately, will have to be reprioritised from other departments that have also received cuts.

In the long term, the Cabinet has committed to a comprehensive review of the student funding model, but we’ve been here before.

The Heher Commission considered wide-ranging submissions on the proposal for free higher education and found it wasn’t feasible. It recommended all qualifying students be funded through loans, backed by SA’s banks, which had to be repaid on an income-contingent basis.

Zuma dismissed those recommendations, which were also criticised by many in the #FeesMustFall movement, when he expanded the NSFAS system with little consideration for how it would be funded or how it failed to solve the intractable problem of the “missing middle”.

“It is antithetical to the purpose and role of universities in a society like ours for students who qualify academically to be at a university to be excluded from studying for financial reasons,” said Bawa.

“If we believe as a nation that universities and a science system are important, then there has to be a decent level of funding for them; for national government to see this as an investment in the talent of our young people and in the future of our democracy and economy.”

There doesn’t appear to be such a funding system in the works. Meanwhile, the funding, debt and protest crises will likely continue. DM