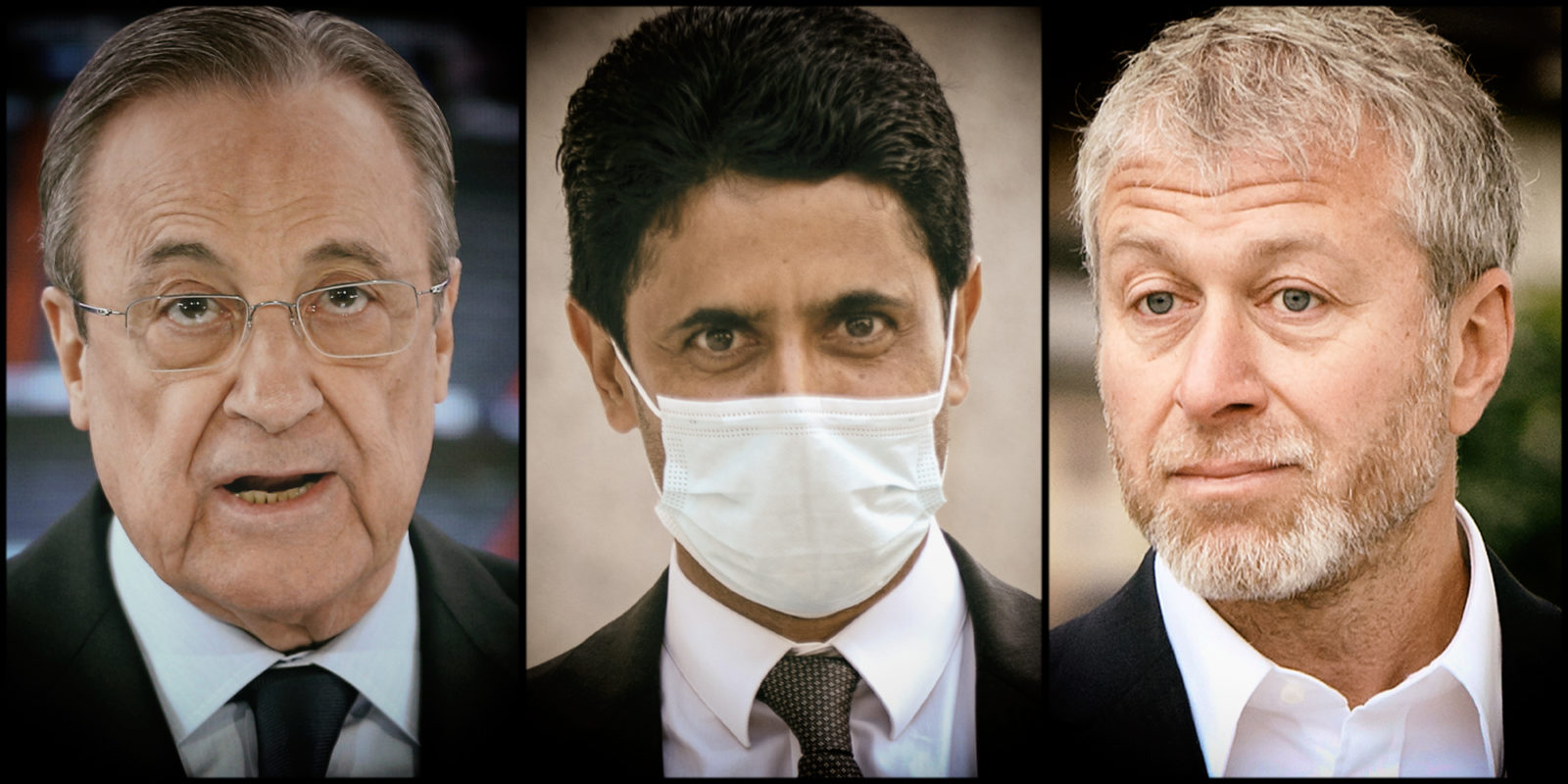 European soccer has become a playing field for the world’s oligarchs, especially those who became fabulously wealthy through oil. Mind-boggling sums of money exchange hands as owners bid for the best talent — neoliberal capitalism taken to a new extreme.

The quarterfinals of the Champion’s League, Europe’s highest level of club soccer, produced the following result: Manchester City, Chelsea, Paris St Germain, and Real Madrid are again in the semi-finals of the competition. In other words, precisely the clubs that have spent the most money buying other clubs’ players with funds from dubious sources.

The Champions League has produced another stunning victory for the excesses of neoliberalism and resulting oligopoly in the economics of soccer. The four clubs have consistently given a finger to any notion of the Union of European Football Associations’ (UEFA) financial fair play rules and have been richly rewarded for their defiance.

Let’s have a closer look at this fearsome quartet. Chelsea owner Roman Abramovich is suing a British reporter, Catherine Belton, for suggesting in her book, Putin’s People, that his wealth is due to his close association with Russian President Vladimir Putin. Who would have thought that?

He bought the club at a cut-rate price of £140-million in 2003 and has poured billions of Russian oil roubles into the team in to make it internationally competitive. Last year alone — and let’s keep in mind that this is in the middle of an economic meltdown for most soccer clubs’ financial situation as a result of Covid-19 — the club spent a reputed €95-million (R1.629-billion) acquiring Kai Havertz and another €53-million on Timo Werner.

Not content with the acquisition of the German national team’s front row, the club appears to be engaged in negotiations with Erling Haaland’s adviser to purchase the Borussia Dortmund striker. That purchase may well cost close to €200-million as Haaland is still under contract until 2023. But, of course, money is not an issue for Chelsea, and Timo Werner’s career there may be shorter than expected because the addition of Haaland will surely evaporate Werner’s playing time. Easy come, easy go?

However, Chelsea will have stiff competition for Haaland and, not surprisingly, it will come from Manchester City, Manchester United, Real Madrid, PSG and Barcelona.

Nasser Al-Khelaifi, the owner of Paris St Germain, works for the emir of Qatar, Sheikh Tamim bin Hamad Al Thani. The emir, in turn, is the head of Qatar’s Sovereign Wealth Fund and, given Qatar’s interest in promoting soccer, especially its 2022 hosting of the Fifa World Cup, authorised an almost unparalleled spending spree to buy a team for the club.

In 2017, PSG bought Neymar from Barcelona for the staggering amount of €222-million and Kylian Mbappe from Monaco for an equally astounding €145-million plus €35-million in bonuses. These purchases are only the tip of the iceberg — Angel di Maria cost €63-million; Mauro Icardi €50-million; Thilo Kehrer €37-million; Marquinhos €31-million. In fact, PSG spent €250-million on benchwarmers to ensure substitute players of almost equal quality to those on the field.

For those of us growing up steeped in the history of a local football club, these developments are depressing and tiresome. We could feel the pain of Manchester United and Arsenal fans a few years back who opposed the buying of their beloved clubs by US moneybags who knew nothing of the soul of the clubs, but saw their commercial potential.

The story at Manchester City sounds frighteningly similar. Sheikh Mansour bin Zayed Al Nahyan, a leading member of the royal family of Abu Dhabi, has turned on the oil spigot for the Sky Blues. Since buying the bankrupt club in 2008, the team is now valued at more than €1.4-billion by Transfermarkt (a soccer magazine that keeps track of players’ values on the transfer market). It is the most expensive soccer team on the planet at double the value of its crosstown rival, Manchester United.

And, with Pep Guardiola at the helm, it also hired arguably the best coach in the world. Under such conditions, the winning of the Champions’ League trophy becomes the clear and only goal.

Of course, these three teams are “Johnny-come-latelies” in the business of buying out other team’s players. The club that has practised this for decades is Real Madrid, beginning in the early 1950s when the club brought in a bunch of Latin American players and augmented the team with several of Europe’s finest. Only when the Spanish league restricted the importation of foreign players in 1963 was Real’s run in Europe’s premier club competitions abruptly halted.

But, with the neoliberal tide of the 1980s and 90s, Real found its way back to its former glory through the funds provided by its president, Florentino Pérez. Pérez used his considerable wealth as well as his business connections to embark on the Galacticos project, which brought players like Ronaldo and many other superstars to play for what was arguably the most prestigious and successful club in Spain next to Barcelona.

The only club capable of matching Real’s spending spree was Barcelona. And it is rumoured that Barcelona is indebted by a billion euro and close to bankruptcy thanks in large part to the exorbitant payroll of Messi and friends.

All four of these clubs are leveraging funds from sources that have little to do with soccer. Three of these clubs are extensions of oil empires; the fourth is an extension of a construction empire. The UEFA has attempted to control this situation by bringing in the so-called “financial fair play” rules. Simply put, these rules are designed to keep clubs from spending more on players than the club actually makes, because the smaller clubs, under tremendous economic pressure to compete with the bigger clubs, were driven into bankruptcy as a result of both their inflated payrolls and the need to buy players to ensure some level of competitiveness.

In fact, PSG, Manchester City and Chelsea were precisely in that situation when their respective owners bought them — broke and down and out. Now, they are strutting about the stage as if they actually deserved their position. And all four clubs were under investigation by UEFA for transgression of the fair play rules — in Manchester City’s case this went as far as a possible two-year ban in terms of Champions League participation. The ban was reversed at the last minute and cynics might speculate as to how that was done.

For those of us growing up steeped in the history of a local football club, these developments are depressing and tiresome. We could feel the pain of Manchester United and Arsenal fans a few years back who opposed the buying of their beloved clubs by US moneybags who knew nothing of the soul of the clubs, but saw their commercial potential.

Many soccer clubs that focus on training young players, bringing them through the ranks of their youth programme, find themselves being poached as soon as the 17-year-old gets some attention. The current Borussia Dortmund team is an example — there are several very young, exceptionally talented players in the squad that just lost to Manchester City. It does not take a genius to figure out that these players are now targets for the big clubs, from Moukoko to Reyna to Knauff. Just like the young guns at Ajax Amsterdam became commodities some two years ago.

The English players at Dortmund like Sancho and Bellingham are already on the list of the top clubs and now several of the others will follow suit. Among the German sides, only Bayern can hold on to its best players, but only just. Schalke, Leverkusen, Porto, Benfica and many of these smaller clubs are regularly poached and it is becoming a strategy for these clubs to discover talent cheaply and then sell it expensively. However, this promotes not only the loss of talented players for the local team and league, it promotes a loss of local affiliation and attachment.

Can one even expect a young player to show loyalty to a club and play for the club for most if not his entire career? Probably not and that, in my old-fashioned view, is a real shame. What it encourages is the kind of flat globalisation of attachment to the current team of the month. Soccer is about more than money — when it is, it has lost its soul as it celebrates only victories, the sale of ever-changing T-shirts and nothing much else.

As Bill Shankley, Liverpool’s iconic manager, once put it: “Some people believe football is a matter of life and death. I am very disappointed with that attitude. I can assure you it is much, much more important than that.” DM