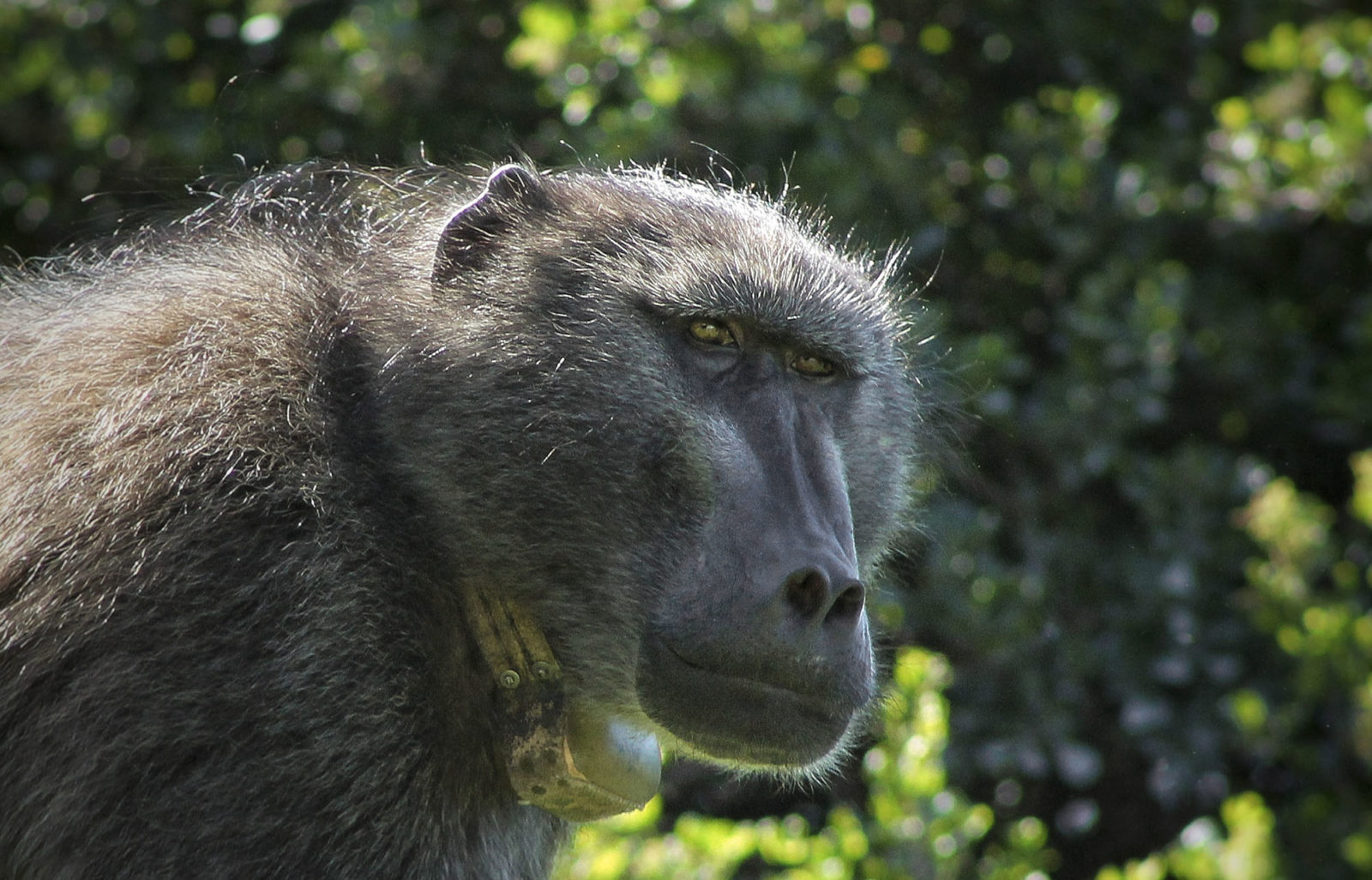 He was a serious and complex baboon. Didn't like to make eye contact, ....this was probably the image that best reflected my take on him. He had a formidable presence, but I got to understand just how restrained and tolerant he was, especially given the fact that the troop was often "herded" by the authorities in the most unpleasant way. (Photo: Anya Adendorff)

It’s residents against the City and neighbour against neighbour as the ‘real reasons’ are sought after a baboon was euthanised by authorities in the Cape’s Southern Peninsula.

Philemon, an adult male baboon in the Cape Peninsula, was killed by authorities for allegedly instigating “raiding behaviour”. Nine days later, the authorities had still not provided proof of the 40 occasions Philemon is said to have entered the urban area.

When DM168 tried to establish why the decision was made to euthanise the baboon known as Philemon, nobody was able to offer the actual evidence on which they said they had based the decision.

Philemon was put to death on 8 April in the mountains between Murdock Valley and Smitswinkel Bay. He was a well-known member, and former alpha male, of the Smitswinkel Bay troop. He had been accused by the City of Cape Town of leading the raiding of homes.

The stakeholders involved in the management of baboon troops in the Cape Peninsula are the City of Cape Town, CapeNature, SANParks, Table Mountain National Park, consultants NCC Environmental Services, the local ward councillor as well as community representatives in a structure called the Councillor’s Appointed Representatives of Baboon Suburbs (Carbs).

Residents of Murdock Valley and Smitswinkel Bay suspect that the decision was based on a spreadsheet compiled by a group of residents who, they say, are anti-baboon and in favour of their killing.

The spreadsheet contained information gleaned from, among other sources, a private community WhatsApp group, as well as residents who informed Murdock Valley South resident Mike Gibson.

The WhatsApp group is mostly used by residents to alert one another to the presence of the troop. Very few of these residents say they are against the baboons. They say they were not made aware that their information was allegedly being used to add to the evidence against Philemon. They say that Philemon was often not the “perpetrator”.

Residents have claimed Gibson has been leading the campaign to have Philemon removed, and sent incident reports to local DA councillor Simon Liell-Cock.

According to sources, NCC Environmental Services were not privy to the reasons for euthanising Philemon, but were simply instructed to carry out the order.

Chantal Luyt said she has been the Councillor’s Appointed Representative of Baboon Suburbs for Smitswinkel Bay “for years”. She petitioned against Philemon’s possible euthanasia last year when he was accused of raiding. She first read of Philemon’s death in news reports.

Gibson, who had petitioned Liell-Cock for Philemon to be dealt with, confirmed in an email to select neighbours that he had personally been informed by the City.

Luyt said she had experienced a good relationship, with clear communication, between baboon monitors NCC Environmental Services and the community. She feared that this had now vanished. “This is like a bomb has been dropped,” she said.

It is unfair to blame a single baboon for what an entire troop does, argued Luyt. She said she observed them almost daily and had witnessed that entire troops were involved in the raiding that Philemon was accused of.

“They [were] trying to pin it on him in order to take him out,” she said. She was adamant that the raiding would continue after his death.

Some residents had started “baboon-proofing” bins, she said, to try to dissuade baboons from coming into the area. Beyond bins, baboons also seek out vegetable patches, fruit trees and open houses.

“If the community could all just work together and buckle down for a month or two and be extremely sensitive about how their houses are run, then this would stop,” Luyt said.

A few weeks ago, the troop came down and “hit a jackpot” because it was bin day. Since then, they haven’t left the area.

She commended the baboon monitors for their efforts to get them out of the area in difficult terrain.

But this was an “easy way out” for the authorities, she believed. She was concerned that the “ultimate goal at this point is to keep the population down”.

“I’m completely shocked and I honestly thought that we’d managed to get over this mountain, especially with the whole Kataza ordeal. I thought it might have opened their eyes a little bit, but clearly not. The transparency is clearly not there. The proof is in what happened today.”

Kataza was a member of the nearby Slangkop group who, after a failed and highly public relocation attempt by the City, was sent to a primate rehabilitation centre in Limpopo in January.

Many residents approached by DM168 declined to go on record. Most said they were horrified by the killing of Philemon and although they wanted the baboon monitors to stop the troop from entering the suburb, they did not support moves to have any baboons killed.

On 8 April the City of Cape Town informed residents in a media release that Philemon had been euthanised that day.

The city said the baboon had entered the urban area more than 40 times between October 2020 and February 2021. He had allegedly entered homes 10 times in February. Philemon had formed a “splinter group” from the Smitswinkel Bay troop and had apparently encouraged other baboons to enter the urban area with him. This, the City alleged, put the entire group in danger.

It told DM168 that NCC Environmental Services had launched a programme in October 2020 to educate residents as well as business and restaurant owners about baboon-proofing waste bins, vegetable gardens and kitchens.

“These actions did not succeed in deterring the persistent and continuous raiding behaviour, unfortunately,” it said. The “baboon rangers” could not deter Philemon from entering the urban area.

“In the interest of the safety of the Smitswinkel Bay troop, and the safety of local residents, it was recommended to Cape­Nature and SANParks that the raiding baboon be euthanised,” the statement said.

The City told DM168: “Selective euthanasia is used as a very last resort only.”

Yet CapeNature told DM168 that “the mandate of baboon management in this case resides with the City of Cape Town” and referred this reporter to the City’s environmental management team.

Nonetheless, it confirmed that it had supported the City’s recommendation for the “removal” of Philemon.

It said the removal “was actioned in compliance with a permit issued earlier to City of Cape Town’s service provider [NCC Environmental Services] by the entity”.

It said it was satisfied that the removal complied with “standard protocols and approved guidelines”. It did not elaborate on what these standards were.

The City’s baboon monitoring project in the Cape Peninsula has been outsourced since at least 2009. The company’s mandate is to lessen conflict between human residents and baboon troops. NCC Environmental Services held the contract to manage this programme between 2009 and 2012, and again from 2020 until the present.

As concerned residents, we keep an incident register of events that occur in our suburb. This register has been shared with the authorities to make them aware of the significant problems being experienced by householders on a daily basis.

NCC said they could not respond to questions from the media and referred DM168 to the City.

Simon Liell-Cock is the DA councillor for Ward 61, which includes Smitswinkel Bay and Murdock Valley, part of Simon’s Town.

He said he agreed with the City’s position that Philemon had been euthanised because of “his raiding behaviour and the danger this presents to the entire troop”.

Liell-Cock explained that the City relied on “hard evidence” presented by NCC Environmental Services for decisions relating to baboon troops. He said euthanasia was “a last resort” taken only when there was “exhaustive evidence” and when all other efforts had proved ineffective. He did not share the evidence.

He said the decision to euthanise rests with CapeNature and SANParks. This decision was based on information provided by NCC Environmental Services and the City of Cape Town. Neither he nor the residents are consulted on individual cases.

Gibson presented himself as the representative of Murdock Valley in an email to residents. In an email sent hours after Philemon had been killed, he commended the decision to “act decisively” and euthanise Philemon. He said that he was “pretty sure” residents’ “efforts” motivated the City to “act decisively”.

Gibson confirmed that he is a “concerned residents’ representative” and does not advise the City or NCC Environmental Services “in any capacity or manner with respect to its baboon management programme in Murdock Valley”.

He confirmed that he had approached both entities to voice concerns about the “inadequate measures” taken to “keep the baboons out of the residential areas”.

“As concerned residents, we keep an incident register of events that occur in our suburb. This register has been shared with the authorities to make them aware of the significant problems being experienced by householders on a daily basis,” he said.

The register, which has been seen by DM168, confirms that Gibson is the main complainant. Most other residents have either given up on vegetable gardening or have baboon-proofed their gardens.

Liell-Cock confirmed that Gibson has been invited to become a representative, because “he was actively communicating with me, so I invited him to a meeting”.

When asked if he knew that the Murdock Valley community was not aware that Gibson presented himself as a community representative, he responded: “The internal community politics have no influence on my decisions – I listen to all residents but always rely on advice from the conservation professionals, who in turn rely on scientific, evidence-based research and decades of experience in the field.”

He denied Gibson had played any role in Philemon’s euthanasia and that “all decisions are based on objective criteria and evidence and not on emotionally based lobbying, whether this comes from baboon rights activists or angry residents”. DM168