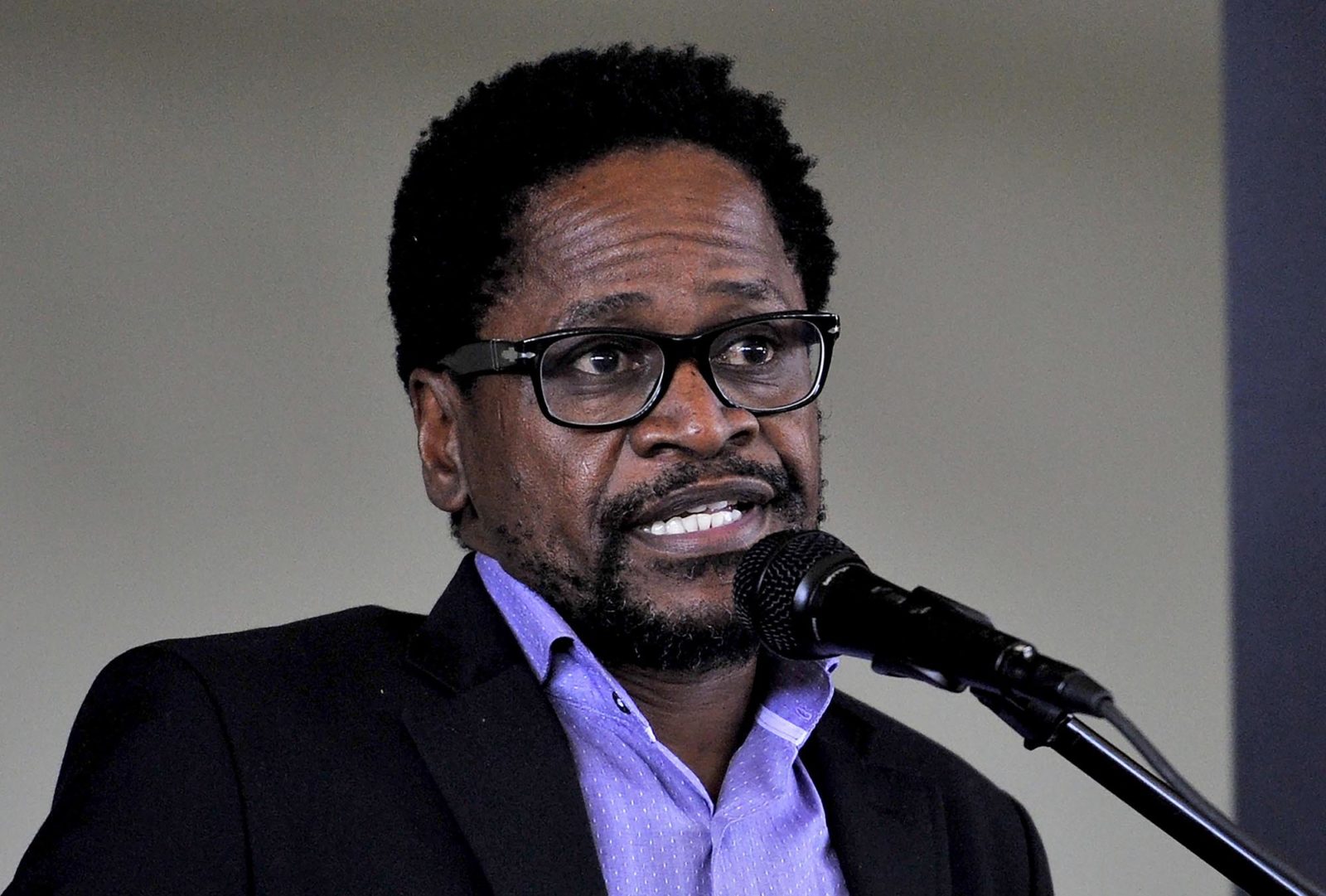 Prasa spokesperson Sipho Sithole addresses mourners during a mass funeral some of the people that were killed in the Kroonstad a train crash in early January on February 03, 2018 in Virginia, South Africa. At least 21 people died when the Shosholoza Meyl train collided with a truck that ignored a traffic sign last month. (Photo by Gallo Images / City Press / Tebogo Letsie)

Sipho Sithole was awarded more than R1m from the Presidential Employment Stimulus Programme.

When the National Arts Council’s (NAC’s) new 18-member council was inducted in January 2021, four members were linked to organisations that were awarded funding from the R300-million for arts and culture, from the Presidential Employment Stimulus Programme (PESP), that the arts council had been tasked with disbursing.

Afrocentric Talent Agency’s sole director, Sipho Sithole, who is also on the NAC council, was awarded more than R1-million from the stimulus package.

Three other council members – Kim Matthews, Bulelwa Margaret Malange and Madré Loubser – are also part of organisations that were approved for PESP.

The fact that they were awarded grants and are members of the council has raised the ire of creatives who have been at loggerheads with the NAC over the disbursal of the PESP package.

But the NAC, in various online meetings with creatives, has said that the applications were adjudicated and approved by an independent expert panel between November and December, therefore the incumbent council would have had no influence on the process.

Council members were nominated by the public to the Department of Sports, Arts and Culture. Nominated candidates needed to have expertise and experience in the arts industry. People who possess other skills which are not directly related to the arts but could be beneficial to the council, such as finance, information technology, human resources and legal could also be nominated.

There were two streams of funding that applicants could apply for by mid-November 2020. Stream 1 was for organisations and individuals to apply for a wage subsidy to retain employees they already had on their payroll or on contract. According to the NAC, stream 2 was “aimed at soliciting proposals from the sector that demonstrate opportunities to create work in order to get income flowing and to get the sector moving”.

Among the criteria needed to qualify for funding, applicants needed to demonstrate that their projects would retain jobs or create new jobs in the sector. Organisations and individuals needed to have a track record and the technical abilities needed for the project.

Sithole’s Afrocentric Talent Agency was awarded R1,089,500 for a project listed as Giya m’Afrika Giya on the NAC website under Stream 2. Details about this project could not be found on the company’s Facebook page, where Sithole regularly posts about his work and personal life.

DM168 asked Sithole for details about his project, whether he had been paid yet and whether he had disclosed to the council that he was a beneficiary of the PESP. Sithole’s response was: “Write on my project and leave me out of it.”

According to this short description of the company, Afrocentric Talent Agency is a “company that will create platforms for Pan-African dialogues on the most discomforting topics on post-coloniality, whilst representing the best creatives in performing arts, public speaking and film.”

The company was registered in 2018 in Parkhurst, Johannesburg.

Sithole, who has an extensive history in the music industry, co-founded a music record label, Native Rhythms. In 2003, he was the deputy managing director of Gallo Music Group, where he signed Thandiswa Mazwai, Skwatta Kamp and Pro Kid.

He isn’t a stranger to controversy. In 2019, Sithole, who was the chief strategy officer at the Passenger Rail Agency of SA (Prasa), was found guilty on five charges, the agency said. Bane Ndlovu, Prasa’s acting general manager for corporate affairs, said that they couldn’t disclose the nature of the charges because “it is a matter which was between the affected parties”.

“Sithole was given a 12-month suspended sanction and was allowed to serve the remainder of his contract. The decision followed the outcomes and ongoing investigations that dogged Prasa of improper, irregular, corrupt, fruitless and wasteful expenditure by various employees of Prasa at all levels of the organisation,” said Ndlovu.

In a 2020 Facebook post, Sithole said that he started working at Prasa in 2014. The following year, former public protector Thuli Madonsela published her report on the railway, he said. In the report, Madonsela flagged a contract that was issued six years before Sithole was at Prasa. “I cancelled further payments of this contract after the Public Protector had issued her report and when I became aware of its history. Unfortunately, I had to face a disciplinary action, got suspended, tried like some naughty employee and became a public face when Prasa was said to be rooting out corrupt executives.”

In the same year, several members of the South African Music Rights Organisation (Samro) citing the Prasa charges against Sithole, called for him to step down as a board member at Samro. One Samro member told City Press that they couldn’t trust someone who was “abusing public trust”.

When asked for details about the projects for which their organisations were awarded funds, Malange and Loubser referred questions to Mashiane. Matthews had not responded at the time of writing. Speaking to Mashiane over the phone, he insisted that all the information was available on the website, despite it only listing the project names and not what each project is about.

On 9 April, during the NAC’s weekly Zoom meetings to update the sector on the PESP, Sithole said he had received death threats. The death threats came after Brian Ntombela, a writer who is part of the sit-in at the NAC’s offices, walked into a meeting between the artists and the portfolio committee on sports, arts and culture on 31 March, and accused him of stealing the artists’ money, said Sithole.

At the same meeting, artists asked whether Sithole had received the first tranche of the funding.

Celenehle Dlamini, the NAC’s acting chairperson, said that Sithole had not received any payment from the NAC yet. He said he would wait for most of the beneficiaries to get their first payment before his organisation got paid, said Dlamini.

Speaking to DM168 about council members benefiting from PESP, musician Eugene Mthethwa said that he did not think there was anything wrong regarding members who had been approved for PESP prior to starting their term. “But they can’t be both the player and the referee,” said Mthethwa.

Members affiliated to organisations that had been approved for funding should have been made to choose between their projects and being on the council, said Mthethwa.

Pieter Toerien, who was the chairperson of the theatre panel at the NAC in 1997, when it was formed, said: “I was part of the people [who] wrote the rule book [at the NAC] and the first rule was that staff members can’t apply for funding from the NAC.”

Toerien said it was “absolutely appalling” that the NAC did not see anything wrong with its council members benefiting from the stimulus package.

Toerien said council members who were approved for PESP funding needed to step down. “I don’t understand how they don’t see the conflict of interest,” said Toerien.

Tensions have been high between the creatives and the NAC since a group of creatives staged a sit-in at the NAC offices in Johannesburg a month ago, demanding answers about the PESP.

This was shortly after the NAC reneged on 613 contracts because it realised there would not be enough money for the 1,374 approved beneficiaries.

Shortly after this announcement, the NAC suspended its CEO, Rosemary Mangope, and CFO, Clifton Changfoot, “pending an investigation in relation to the management of the Presidential Employment Stimulus Programme (PESP)…” reads the NAC’s statement.