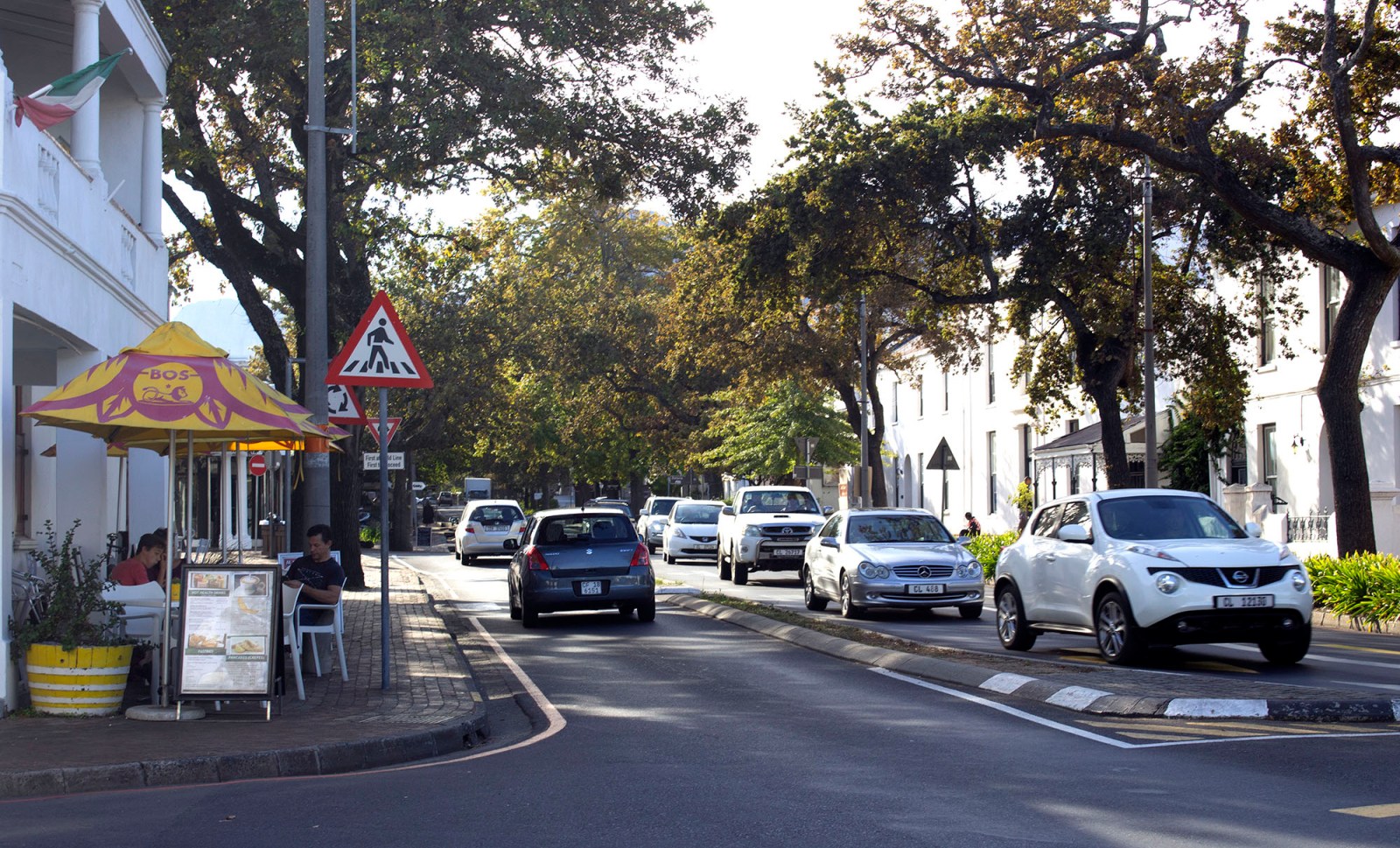 Destinations globally and locally are grappling with the challenge of reigniting their tourism economies, but the tourist town of Stellenbosch is seeing some return to activity. (Photo: Rebecca Pitt)

Tourism is showing signs of an uptick in Stellenbosch, a town that took a huge blow during the Covid-19 lockdown, when the country recorded an 87.3% drop in tourists in January 2021 compared with the same month in 2020.

It was a relief for Norbert Rehder, a Cape Town-based freelance tour guide for 32 years, to take a group of tourists around Stellenbosch, in the Cape Winelands. It was his first tour in a year.

Rehder is one of thousands of tour guides across the country who have been shut out of work since March 2020.

A group of tourists moving about the streets of Stellenbosch is reminiscent of when the tourist town buzzed with international visitors in guesthouses and galleries and on wine farms.

Rehder landed this particular tour – a group from Taiwan and Germany – thanks to his ability to converse in German. Not all tour guides have been as lucky.

Most of the 9,000 guides in Cape Town have had to borrow money from family and some have moved out of their homes because of the financial hit the industry took from lockdown, Rehder told Daily Maverick.

“It has been a total disaster,” he said, adding that the UIF relief tour guides have received has been sporadic and insufficient.

“Things are not picking up yet, but we are hoping that by September [the current situation will] come right,” said Rehder, who now has a handyman and gardening side-business, just to stay afloat.

Destinations globally are struggling to reignite their tourism economies and South Africa has not been spared a near collapse in international tourist arrivals.

According to Department of Tourism spokesperson Blessing Manale,  countrywide, South Africa experienced an 87% drop in tourist numbers in January 2021 compared with the same month last year.

“Hotel occupancies have declined significantly, leading to some small and large hoteliers being forced to close down. Airlines have significantly curtailed operations and many tourism attractions are either closed or operating below capacity.”

This came as key source markets had instituted travel restrictions to the country as the South African brand remained under pressure from the association with the 501Y.V2 variant of the virus.

Historically the tourism sector has shown resilience through global financial meltdowns and pandemics, but the scale and depth of the Covid-19 health and economic disruption suggest that the road to recovery in the sector will be long and highly uncertain, Manale added.

A return to activity, albeit slowly

In Stellenbosch, there are signs that tourist activity is picking up.

While its economy does not depend entirely on tourism, the local services sector – especially accommodation, restaurants, travel agencies, tour bus operators – along with retailers, laundries and wholesalers, has been struggling significantly in the absence of the regular stream of domestic and international tourists, said Mia Slabber, an economist from the Bureau for Economic Research attached to Stellenbosch University.

Much like the university, tourism is inseparable from Stellenbosch, she said.

“Although tourism is in no way what it was pre-Covid, we are enjoying an upward swing in occupancy,” said Elmarie Rabe, the marketing manager for Visit Stellenbosch and general manager of Stellenbosch Wine Routes.

But the town is still facing a 40% to 60% decline in business activity compared with activity before the pandemic.

Rehder’s group had just come from a few days upcountry, including at the Kruger National Park.

The Cape Town leg always begins with a city tour, followed by a trip to Cape Point and a day in the Winelands, he said.

But “never ever” in Rehder’s career had he seen Cape Point so empty.

Parking bays were empty. Shops were closed. The usual congestion had vanished.

“It is very sad to see things like this. A sore sight.”

Stellenbosch’s guesthouses and galleries, who depend on a foreign clientele, have adapted into cafés to generate more income to boost business.

Be that as it may, according to Ronnie Donaldson, who owns the Art Room and Delft Huis on Dorp Street, which has also added a café to its offering, business remains “dead and generally very slow” at tourist spots in town.

Some of the established galleries, such as the Dyman Gallery, had closed down since last March.

But aside from the positive impact on local businesses owing to the return of university students and staff, there was a silver lining: a notable shift towards domestic tourism, with locals coming to town for weekends away.

The town used to be a “graveyard” on Sundays, but was busier than ever now, Donaldson said.

Rabe confirmed an increasing demand for weekend accommodation, while weekdays, which are usually filled by international tourists, are generally quieter.

However, said Slabber, while much “has been done to stimulate domestic and local activity, it is very unlikely to be enough to offset the loss of international and other domestic tourism receipts”.

“Much depends on the success – or not – of the South African vaccine roll-out, as this is likely to be taken into consideration when inbound tourism from traditional source markets, like the US and Europe, resumes later this year and into 2022 and 2023.” DM