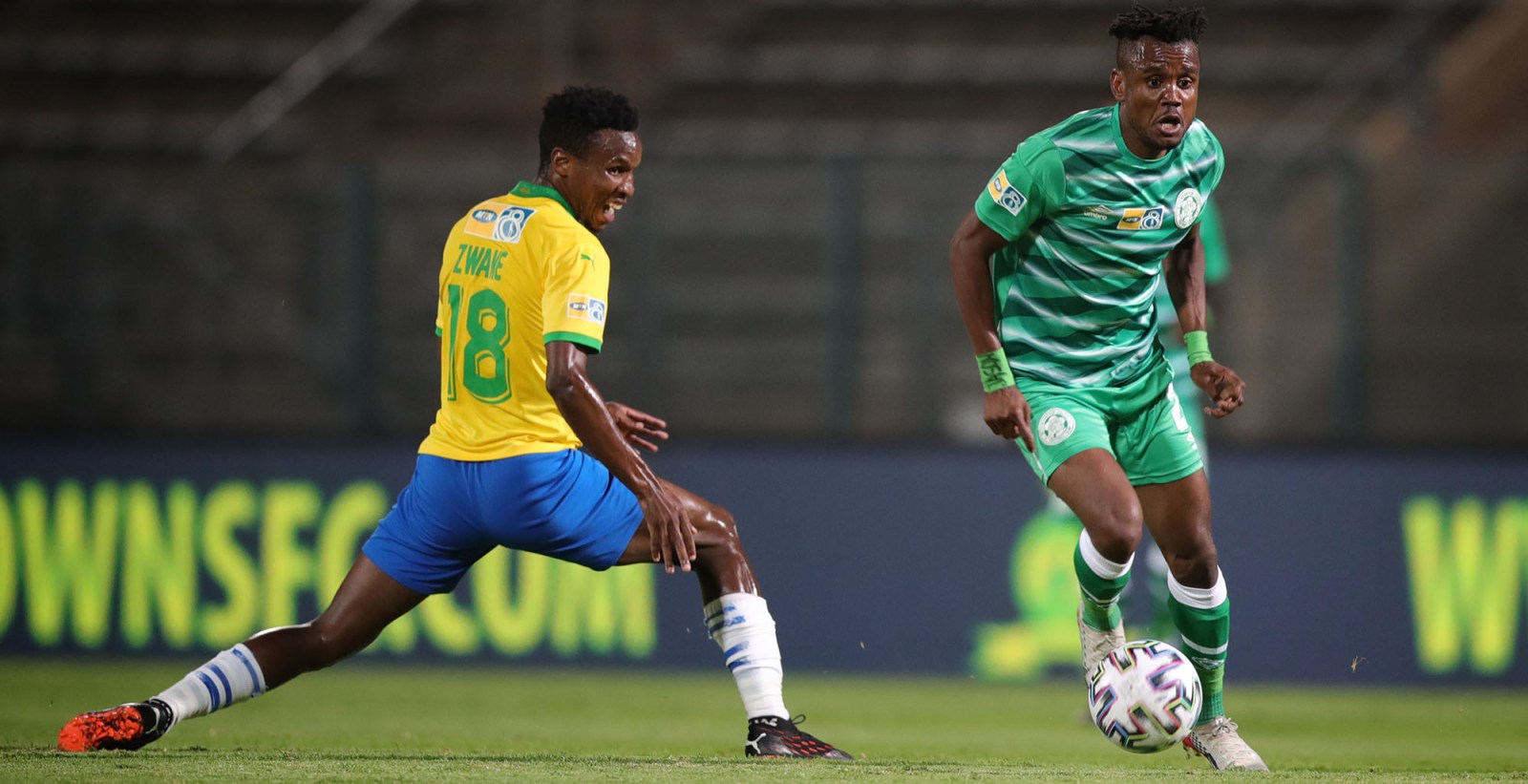 Themba Zwane of Mamelodi Sundowns – in action here against Harris Tchilimbou of Bloemfontein Celtic during an MTN8 quarterfinal clash in 2020 – supplied one of the goals against Chippa United on Monday. (Photo by Samuel Shivambu/ Backpagepix/ Gallo Images)

It seems the sky’s the limit for Mamelodi Sundowns after they set the record for the longest unbeaten run by a top-flight South African side at the start of the league season.

The side have become a runaway train as they channel their inner Raphael “Chukwu Train” Chukwu – the legendary striker who terrorised defenders and bulldozed everything in his path for Masandawana a couple of decades ago.

By beating Chippa United 2-1 on Monday afternoon, Sundowns set the record for the longest unbeaten run by a DStv Premiership team.

Thanks to goals from Themba Zwane and goal machine Peter Shalulile, the Chloorkop side surpassed Kaizer Chiefs’ mark of 19 games unbeaten. Amakhosi achieved the feat in the 2014/15 season, under the tutelage of Stuart Baxter.

After matching Chiefs’ record in a previous encounter against Tshakhuma Tsha Madzivhandila (TTM), whom they pummelled 3-1, Masandawana were untroubled by the Chilli Boys as they coasted to the new record.

The former African champions have reached the milestone through 13 wins and seven draws.

Sundowns co-coach Manqoba Mngqithi told the media they were not fixated on records, but were merely focused on winning games.

“We are always focusing on making sure we win every match. We even feel bad when we get a draw. Whether it’s a friendly match, be it a practice match, we always want to win… As for the records, that is for the statisticians and the media.”

This season Masandawana have only lost twice in all competitions – in the MTN8 where they were vanquished by Bloemfontein Celtic, then most recently in what was effectively a dead rubber match against CR Belouizdad of Algeria in the CAF Champions League.

In the league there are no such blotches for the team seeking to become the first South African side to win the Premiership four times on the trot.

They are currently tied with SuperSport United on three in a row, although Masandawana have two hat-tricks to their name, having also won the league three consecutive times between 1998 and 2000.

As things stand, that will be another record that the Tshwane giants tick off. They are six points clear at the summit of the log table, despite having played two games fewer than closest rivals, AmaZulu.

Besides breaking the record, Mngqithi saw the victory against Chippa in a more practical way: as another crucial stride towards the title.

“It’s very important because now you’re starting to count how many games you must win in order to secure the top spot,” said the coach.

“We are happy that we have achieved our targets thus far. We are getting closer and closer to where we want to be. Nobody would’ve anticipated that at this stage of the season we’d be where we are in terms of the number of points and the position.”

Indeed, the dugout synergy and harmony of “the three wise men”, as Mngqithi and co-coaches Rulani Mokwena and Steve Komphela have come to be known, have been transferred to the pitch.

Despite having to rotate the squad due to an extremely compressed schedule, Masandawana have remained fluid and clockwork-like. Their depth of quality is there for all to see.

The next task is a delayed Nedbank Cup quarterfinal tie against Orlando Pirates on Thursday, 15 April. That’s a mere two-day turnaround from the Chippa fixture.

However, according to defender Lyle Lakay, Sundowns’ experience of juggling different competitions, including the rigours of the Champions League, is helping them stay focused amid the onslaught of fixture after fixture.

“We have been travelling and playing a lot. There are a couple of big games coming till the end of the season and we take every game like a cup final,” Lakay told the club’s website.

“We have an objective that we want to achieve at the end of the season and this is not the first time we are in this type of situation; we have experience from many seasons and that has prepared us for such moments.” DM