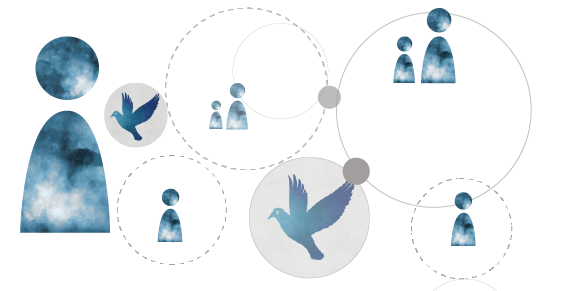 Rector Terry Lester has borne witness to death and loss for many years, both in his time as a priest and in his personal capacity. He has learned that loss cannot be compartmentalised. Instead, he views it as a journey filled with hills and valleys.

Christ Church Constantia is over 120 years old. Made of rough stone, it sits wisely on the corner of Constantia Main Road and Parish Road, like an old oracle in her favourite chair, bearing witness to the intersection’s bustling passing parade.

Squirrels scatter up the grove of pine trees sheltering the church as rector Terry Lester double-times to his office to meet me after enjoying his morning toast.

A priest for over 30 years, Terry Lester has spent a lot of time in grief’s trenches fathoming the harsh injustices of the world which stretch down his lineage.

Lester’s paternal grandmother, Christine, was born in Genadendal in 1896 of Khoi slave origin. When Christine’s first husband died – she married when she was just 17 years old in the Moravian Hill community in District 6 – she became one of the few single women to own property, which she bid on with success in Constantia Valley, well known for its vineyards and flower gardens. There, Christine met and married a tenant farmer called Sebastian Lester and had three sons and two daughters.

Albin (later Lester’s father) met Joyce and they settled in Strawberry Lane with Albin’s mother, Christine, until the apartheid evictions in 1965. The Lester’s Constantia family home was pulled out from under them and they were forced to relocate to Grassy Park, where Lester remembers the water table being so high his family often found themselves wading through the house in ankle-deep water.

It was the first time Lester would grapple with a sense of loss as his little brother, born two weeks before they were moved out of Constantia, contracted meningitis which resulted in him being brain-damaged.

“My own experience of grief relates to losing my father and my brother in the same year, four months apart, about seven years ago. My father, a former teacher, was 74 years old. He died from bladder cancer.”

“My children were five, seven and nine when my wife Colleen was diagnosed with cancer. She was 32. There was no history of cancer in her family. It just seemed a complete and total random ‘pop-up’. Fortunately for us, it did not just decimate her in a short space of time.

“It was caught early and treatment started soon after. Two years after her diagnosis she had to have a full hysterectomy and then it appeared in her neck, then her hip and pelvic area, which was what eventually killed her.”

Lester deliberately chooses to use the phrase “journeying with cancer” as opposed to the widely used “battle” or “fight” because he feels it is important to change the connotations behind the processes of loss.

“When people talk to me about ‘fighting a disease’, I try to steer them away from it being a pugilistic contest, because I think it softens the language around it and you embrace it as part of a discovery of your humanity, which I don’t think you would otherwise have discovered had you not experienced it or walked with it.”

“Three-and-a-half years ago I lost my wife to breast cancer. I prefer the word ‘journey’ to the word ‘battle’ because I think a battle can be exhausting. You think you have won the fight when the doctors give an all-clear, only to be devastated three months later at a check-up when new spots are detected. So I think it is more a ‘journeying with’ instead of a battle against.”

Since lockdown befell the country last year, Lester and the team at Christ Church have been working to keep the community together and prevent Covid-19 from spinning congregants apart with fear, loss and devastation.

“One of the things I have found myself doing a lot of, is burying people between the age of 40 and 55,” says Lester. “For a lot of people, this is supposed to be the prime of their lives.”

Lester recalls counselling a woman who lost her mother, her husband and her husband’s two uncles within months of each other.

“While we were planning the memorial, her daughter, who came to make the arrangements, informed me that her husband had landed in hospital with Covid. Two weeks after her mother died, her husband passed.

“So we’re talking about a person who is 49 years old not just dealing with one death, but two. So in some instances, people are having to process multiple deaths coming at you faster than you can process the first death.

“Again, you can only have a few people present at these funerals so you don’t get to actually attend or acknowledge or help process these harsh facts,” says Lester.

Lester bought a tripod and microphone and for some months would conduct services from behind the lectern on his own, his jokes echoing through empty pews, and uploading them to the churches website as podcasts.

Although we have been able to adapt and move a lot of life online, connecting via Whatsapp video call, Zoom or Facetime, Lester points out that we are missing fundamental steps that help to facilitate and process our grief.

“It is not just the amount of loss and the pace at which people are having to deal with loss, but also the trauma tethered to not being able to carry out the usual, very tactile rituals.

“It is a hugely traumatic thing when there are certain rites of passage that you do for a loved one that can’t be carried out any more, like squeezing into a hospital ward with your loved ones, touching a mother’s hand or kissing her forehead as she slips away.”

Lester adds that after death, you are usually able to ready your loved one for the parlour, arrange their affairs and sit with family over photos and recount fond memories sealed in possessions.

“These are quite important tactile moments of ‘releasing’, and so when these simple rites of passage that have evolved over decades are not engaged in, it is immensely traumatic.

“These are things that I think are going to come back to haunt us when we return to ‘normal’, whatever that is going to be,” adds Lester.

On the subject of guidance in times of immense loss and uncertainty, Lester says “we really need to discover each other. There is too little spontaneous mixing of groups of people so how can we move forward? We need to find places to meet…”

Lester says the problem with our society is rooted in disconnection and division, to the extent that society sees their communities as an enemy or fair game to victimise, and through the loss of connectedness we’ve lost compassion and the ability to care.

Talking to each other might be one way to remedy disconnection and aid in coping with a sense of loss and grieving.

“We keep thinking other people’s lives are problem-free, but actually when you do talk to a person you often realise that there is so much commonality, and a sense of comfort can come from that,” says Lester.

Lester explains that his personal experiences remind him every day that dealing with loss and coping with grief is not so cut-and-dried as moving from one grieving phase to the next.

“There are those that would like to package grief into neat, little compartments like pigeonholes: anger, bargaining, acceptance. The idea is once you have been to one pigeonhole, you move on to the next one. I don’t think things are as neat and tidy as that. Some days you could be laughing and the next you just cannot control the tears,” he says.

He adds that the hardest part about journeying with loss is that one is constantly reminded of those losses – the trick to work through this is to remember the joy before the loss.

“Colleen won’t get to see and enjoy our new grandchildren or celebrate the PhD that my daughter Claire received during a very emotional week… In a way each time a significant event happens, you are reminded of what the person is not a part of it, but at the same time, you are also reminded that my children are here because of her. So it is not just a focus on the losses,” says Lester.

“Loss is a journey and the journey isn’t always a straight, flat road. In my own life I continue to journey with loss,” adds Lester.

However traumatic the past year has been, and how much loss it has left in its devastating wake, Lester says there is an important lesson to be learned – the pandemic can strike anyone, anywhere, whether you’re living in a palace or in a shack.

“There has been a ‘levelling of the playing field’ and, if anything, this fact should refocus our shared humanity and what we can do for each other and with each other, and how we can enable each other.” DM/ML