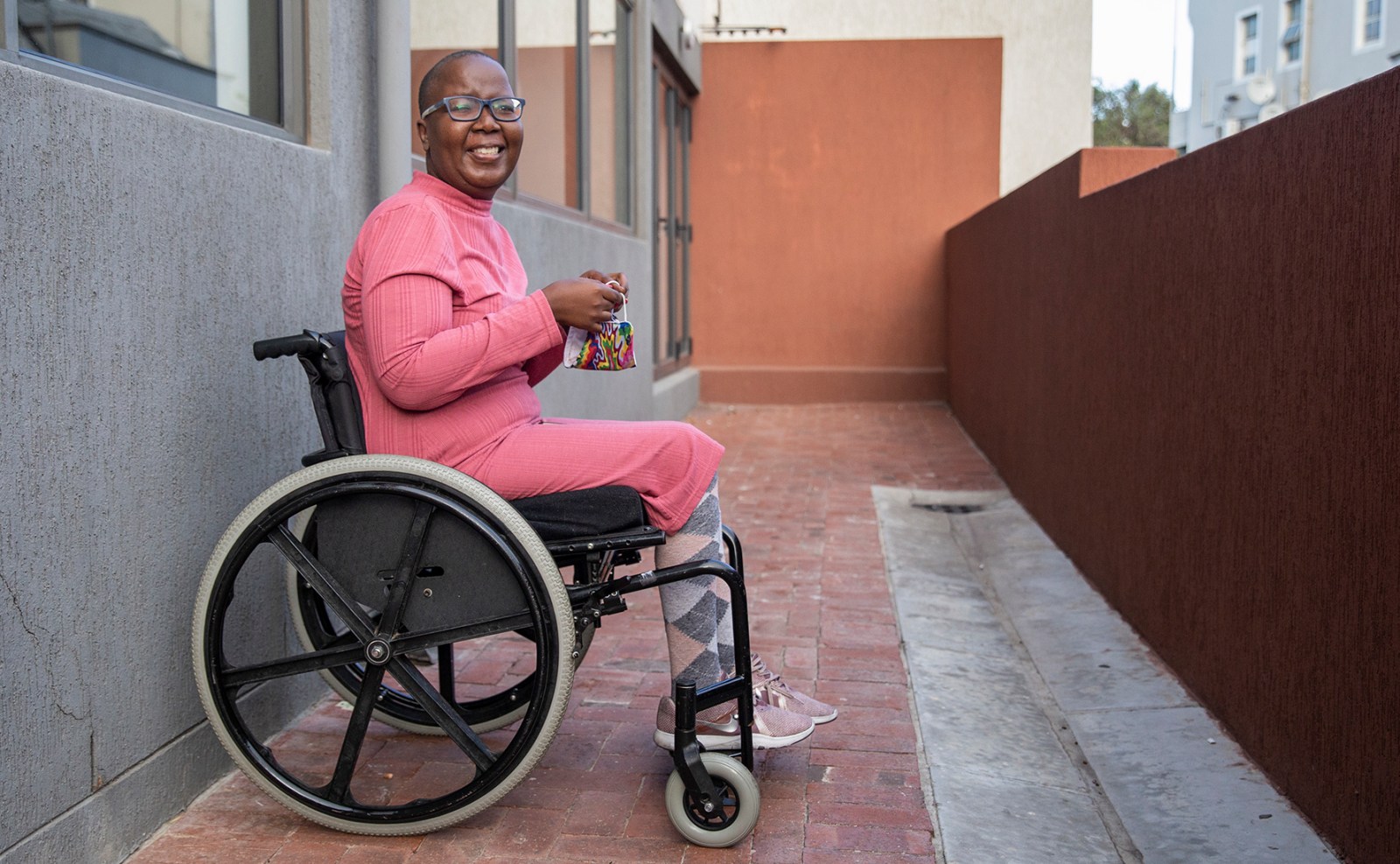 It’s a sunny day and wheelchair user Makgosi Letimile sits behind the wall that separates her building from Trill Road, Observatory. This is the only place she has easy access to in her neighbourhood. (Photo: Ashraf Hendricks)

Ensuring public spaces are accessible to all is the first step to making a city truly inclusive. But, as I’ve come to realise in my 11 years in Cape Town, not everyone is consulted — or even considered — when it comes to the planning of a city. In the first of a series that will appear every Friday, we meet Makgosi Letimile, a wheelchair user from Observatory who is afraid to leave her home.

“Every activity in my daily life is an act of protest.” This is how Makgosi Letimile describes her experience as a disabled woman living in Cape Town. From the moment she opens her flat door and heads down the corridor of the nine-storey building where she lives, to the moment she reaches her destination, 36-year-old Makgosi is fighting a battle largely ignored by most fully abled people in our city.

Makgosi lives in the Cape Town suburb of Observatory. She has been navigating the city in a wheelchair ever since suffering TB complications in 2016. She speaks openly about her story and how she has become a disabilities consultant and advocate for access to both physical spaces and knowledge about health for disabled people. She describes herself as “a mom, a writer, a disability awareness activist and someone who likes talking about sex toys and disabilities”.

Since January, Makgosi has been part of a group of six Capetonians who have engaged in conversation and reflection with me about their experiences in public spaces since the pandemic began. Covid-19 has certainly exacerbated some of the challenges.

And even though the pandemic has shed light on an array of social inequalities, when it comes to disabilities, it has made an already invisible segment of the population in Cape Town even more so.

When the seven of us met in a virtual chat, Makgosi asked: “When was the last time you saw a person with disabilities and it wasn’t ‘grant day’ at a government building?” People with disabilities are forced to navigate an unfriendly and dangerous environment at the best of times. With Covid-19, pre-existing health conditions heighten anxiety about being exposed to the outside world.

Makgosi is warm and welcoming when we meet her to take photos on a sunny Tuesday morning. She takes us up to her flat from where she can see the ocean. She explains this view is one of the reasons she has stayed here, even though it’s not the most affordable and the building doesn’t have automatic doors, which means she depends on someone to open them for her when she leaves or returns. Not to mention the elevator, which stops working during load shedding.

We ask Makgosi about the spaces in her neighbourhood she might enjoy on a regular basis so that we can photograph her there. Her response is that she isn’t able to get to any public space on her own as the pavements are too uneven. The only option, which is simply too risky, is to go along the road.

She reflects on the many barriers she encounters when attempting to access public or, for that matter, any space. From relying on a functioning lift and the help of others to open doors, to having to hire an Uber to go anywhere — be that work, a park or a shop — she is effectively paying an ongoing toll to live her life in this city.

Some afternoons, when Makgosi is looking for a little sun, she sits in front of her building to “watch the world go by”. She parks her wheelchair behind a low wall that separates the street from the sidewalk, where she says she feels safe. If she feels a little braver, she moves her wheelchair to the piece of pavement that borders the street so that she has a wider view.

Trill Road in Observatory is a typical working-class Cape Town street — its surfaces are uneven and cars park along both sides despite its narrowness. Many park on the sidewalk, making it virtually impossible for a person on a wheelchair to get through. The road is noisy and motorists often go beyond the speed limit for a residential area. It’s little wonder that Makgosi is reluctant to use the road to go anywhere — she is afraid for her life.

Since public transport is not a viable option for someone in a wheelchair — she has spent months on a waiting list to access MyCiTi’s “dial-a-ride” service for disabled people — she has to use Uber, which quickly becomes very expensive. Sometimes her partner, who does not live with her, takes her out in his car. This has made her realise that learning to drive, and owning a vehicle, is the only way to really access the city.

When asked what she would ask of city policymakers, Makgosi says: “Give us transport.” In a city where public transport is unreliable even for able-bodied residents, this is a profound cry for access by someone who is already excluded from most activities and services provided by local government.

Makgosi takes solace in knowing that the world is accessible online, something that has become commonplace during the pandemic. It’s how she has stayed in touch with people, shopped for food and earned a living. During load shedding, however, her network is down, leaving her isolated and back to square one. Nevertheless, the pandemic has encouraged her to continue to look for internet-based work. “It is a safe space because I don’t have to go outside,” she says.

Makgosi has a powerful empathy for people in distress and during the pandemic she has reflected on the vulnerability of those without a home. She mentions seeing a woman in a wheelchair begging, then imagining herself there. Her living situation is already precarious because of costs, limited choices and work instability, and she believes that homelessness could easily become a reality for a disabled person. Indeed, this is the lived reality for much of Cape Town’s homeless population.

Makgosi is clearly tired of being the person who constantly points to how inaccessible places are, but she said she has no choice. Her reality is a permanent reminder of what an inaccessible city feels like and she has plenty of anecdotes to illustrate that.

She tells the story of waiting at a supermarket parking lot for an Uber, only for a government vehicle to pull into the disabled bay. There was no emergency that might warrant such behaviour — simply two people, perhaps during their lunch hour, without any regard for who might need that space.

Makgosi also reflects on the protests against beach closures during lockdown. Capetonians were enraged that they were not able to access the beach whenever they pleased. But Makgosi was not able to access any Cape Town beach, except Muizenberg, even before lockdown. She says: “Covid made me realise that humanity understands accessibility — it is just that they choose not to do anything about it.”

The irony is that many people are now discovering what it’s like to live with disabilities, says Makgosi. The realisation that a global pandemic has limited people’s movements profoundly, and that those with “long Covid” are having to contend with some physical disabilities, has made a lot of people think more seriously about the implications for society at large.

Makgosi says it might be a trigger to think about the many things we need to change in Cape Town to make this a truly inclusive city.

Public space holds so much potential to make our city better for everyone, but Makgosi has helped me realise this is a futile effort when a portion of that “public” has no access to that space.

And so I join her in calling on decision-makers in our city to open up the streets and make transport accessible to all. As Makgosi says, inclusivity is not just a word — it should be in all the actions people take.

“Not worrying about my safety or the condition of my chair would mean I am accepted in this city because people have designed things with people like me in mind.” DM/MC