Behind schedule: South Africa is not meeting its childh...

Behind schedule: South Africa is not meeting its childhood immunisation catch-up targets 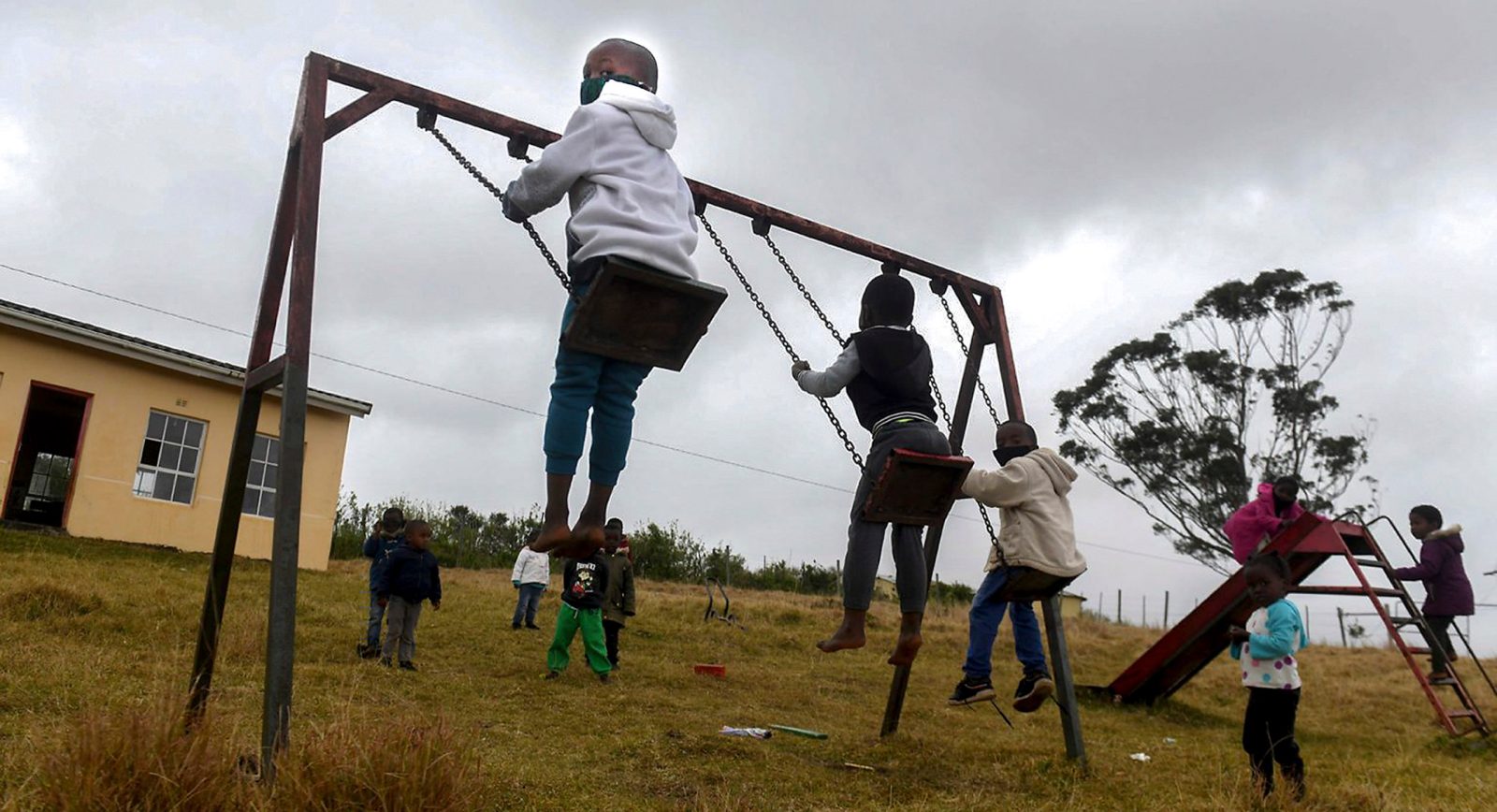 Important child immunisaton targets are being missed in the catch-up drive after the hard Covid-19 lockdown in 2020. (Photo: Black Star / Spotlight)

Following a decline in childhood immunisations during the Covid-19 hard lockdown in 2020, a nationwide catch-up drive was launched in November. The government is not sharing all the data on how the drive is going, but the data that we have been able to access show that some important targets are being missed.

The drive, aimed at children below the age of five, began with 12 districts identified by the department of health as being in urgent need of catching up. The plan was for these 12 districts to catch up by the end of January, after which the rest of the country would follow.

However, it appears that the drive did not meet its targets in the priority districts by the end of January, and not all 12 districts started on time.

Spotlight has only seen data on progress in the priority districts up to January. Despite several requests, we have not been able to access more recent data or data for the rest of the country.

Two districts did not participate

Out of the 12 districts, two, the City of Cape Town and Capricorn in Limpopo, did not participate in the start of the catch-up drive, according to Ntombi Mazibuko, consultant at Unicef.

According to Elizabeth Maseti, the deputy director of the Expanded Programme on Immunisation (EPI), there is currently no national stock-out of vaccines, and the shortage in Limpopo has been resolved. She said Capricorn has since been able to start its catch-up drive.

Western Cape health department spokesperson, Byron La Hoe, confirms that the City of Cape Town was one of the 12 priority districts, but had chosen to conduct its own, independent catch-up drive.

“The Western Cape government has its own information management system (Sinjani) that feeds into the district health information system at national level,” explains La Hoe.

Mazibuko says the 12 districts identified were in the seven metropolitan cities, (Ekurhuleni was excluded), as well as several districts in the provinces without metros. “We were looking at the data; the number of children that each district has missed. These are the provinces that had many children that were unvaccinated or under-vaccinated,” she says.

The metros and districts are:

What the data show

The health department provided Spotlight with vaccination coverage data for only the first three doses of the Hexavalent vaccine, and the measles first and second dose, in the 12 priority districts for November, December and January.

According to an immunisation schedule on the national health department’s website, the Hexavalent vaccine is a combination vaccine against Diphtheria, Tetanus and Acellular pertussis, as well as inactivated Polio vaccine, Haemophilus Influenza type B and Hepatitis B.

In the data shared with Spotlight, the target coverage for the Hexavalent vaccine is 80% at one year of age, and for the measles vaccine, 90%. According to Mazibuko, the World Health Organisation and South Africa’s actual target for the measles second dose is 95% to 99%, but this is not a target South Africa has met – which is why districts and metros were given the interim target of 90%.

The priority districts were largely unable to meet these targets consistently across the three-month period.

Only two districts, Johannesburg and Ehlanzeni, met the Hexavalent vaccine coverage target of 80% in all three months. Four districts, Buffalo City, Nelson Mandela Bay, Capricorn and Bojanala, did not meet this target in any of the three months.

Maseti says that performance declined in December due to the Covid-19 second wave. “Districts are currently intensifying the catch-up of missed doses,” she says, adding that Ekurhuleni and four districts in the Free State and three in Northwest also started catch-up programmes in November. 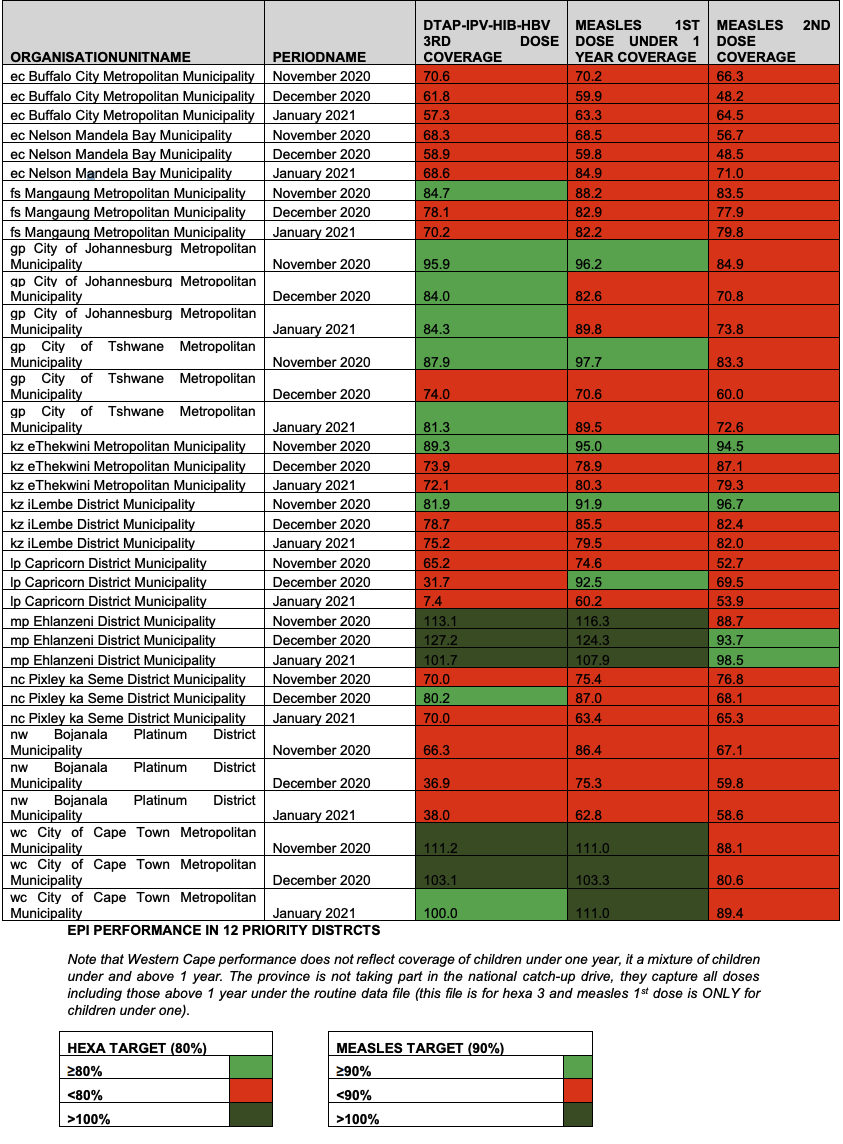 The data shows a trend where coverage for the three vaccines sometimes fluctuates dramatically in specific districts over the three-month period. Hexavalent coverage in Capricorn in Limpopo, for example, dropped dramatically from 65.2% in November, to 31.7% in December and 7.4% in January.

Mazibuko explains the reason for such fluctuations is that not all the children who were meant to receive the Hexavalent third dose, measles one or measles two vaccine each month, actually received them, which brings the coverage down. For example, she says, a child could receive their first vaccine dose at six weeks, but then miss their second dose.

While the missed second dose may be caught up at a later stage, coverage will go down for the month the dose was missed. In the case of the Hexavalent vaccine, the immunisation schedule outlines that the first dose is given at six weeks, the second dose at ten weeks, and the third dose at 14 weeks.

If a child is meant to receive their third dose in December but misses that dose, it will bring the coverage of the Hexavalent vaccine down for that month.

She provides the example of Buffalo City in the Eastern Cape. In November, the district showed 70.6% coverage for the Hexavalent vaccine, but in December the coverage went down to 61.8%. This means that not all the children who were supposed to receive their third dose were vaccinated in December.

She adds that vaccination rates tend to decline in December because people are on holiday and might not visit their clinics at that time, but the rates usually pick up in January.

Data for children under one might not be accurate

She adds that this is a current gap in the system, which was noted in the catch-up drive. As a result, a new file was created to capture the data of children below the age of five.

In the data provided by the health department, two districts – the City of Cape Town and Ehlanzeni – showed more than 100% coverage. The implication of this, according to Mazibuko, is that we might not be getting an accurate picture of what is happening in those districts with the immunisation of children below the age of one.

No outbreak of childhood diseases

So far, the National Institute for Communicable Diseases (NICD) has not reported any outbreaks of childhood diseases on its website, although three cases of measles were reported last year in the Eastern Cape and KwaZulu-Natal.

“These cases do not yet comprise a cluster or outbreak (defined as three cases within one health district within one month) but warrant heightened attention,” the NICD alert stated.

“We are cognisant of the fact that the Covid-19 positive numbers have complicated everything… and so we will compete with this pandemic when it comes to immunisation until probably everything normalises,” Mazibuko says.

She says that the closing of Early Childhood Development (ECD) centres in 2020 due to the pandemic has made it difficult to reach children and caregivers to encourage them to take children to get immunised.

“Without children in the ECD centres, the likelihood of reaching a target is also very minimal,” she says.

Maseti also told Spotlight that the National Immunisation Coverage Survey, which was supposed to be released at the end of last year, is “awaiting approval to be disseminated to provinces”. DM/MC

This article is published by Spotlight – health journalism in the public interest.