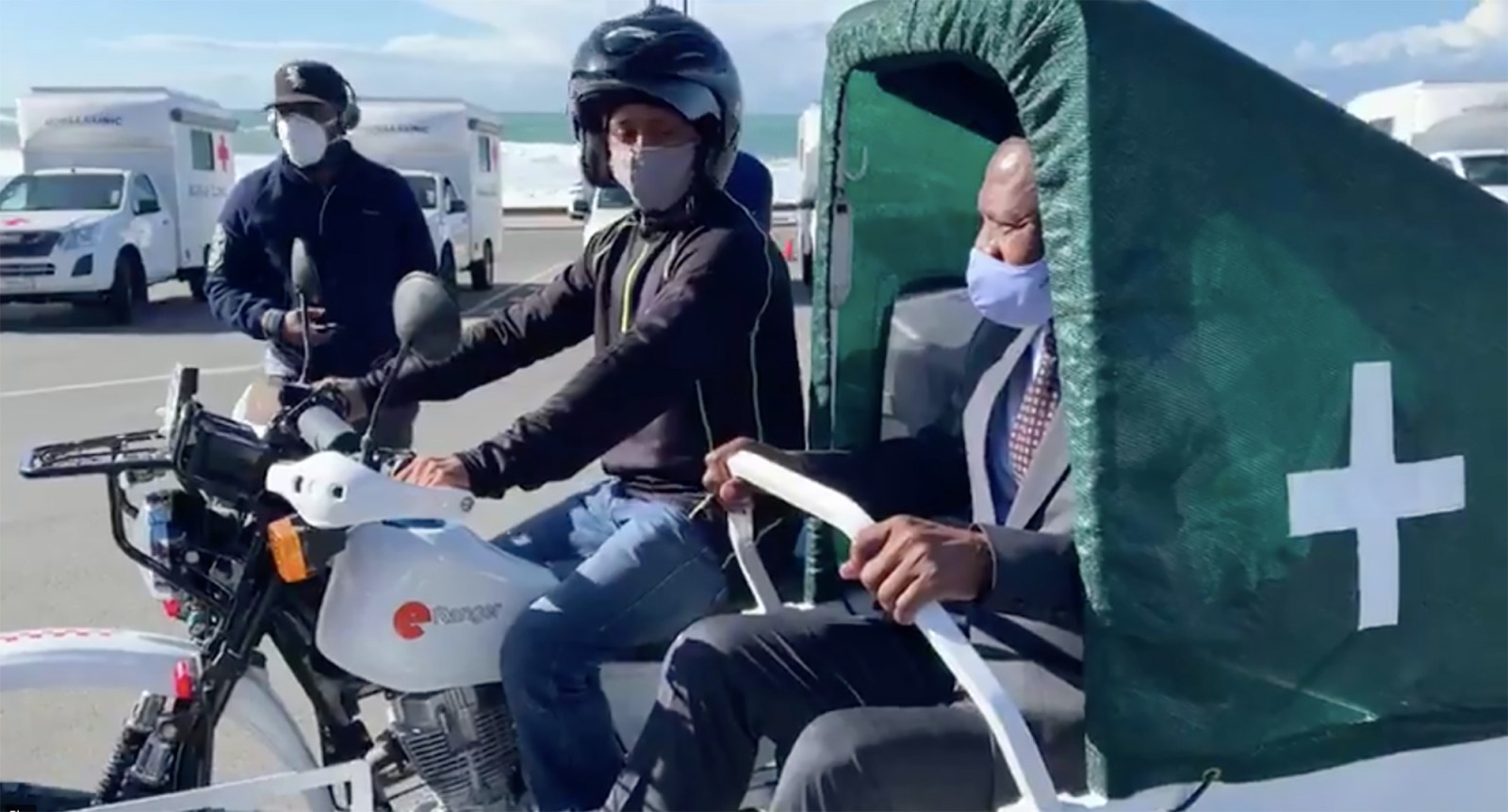 Health Minister Zweli Mkhize at the launch of the motorcycle ‘ambulance’ project in the Eastern Cape. (Screenshot: Twitter / @ZweliMkhize)

The Eastern Cape department of health wanted to issue a contract for 100 motorcycle clinics without going to tender. When that was denied, it flouted procurement regulations under the guise of the Covid-19 pandemic, the Public Protector has found. The only upside is that the service provider was never paid in what’s become known as ‘Scootergate’.

Public Protector Busisiwe Mkhwebane has found that the Eastern Cape Department of Health’s (ECDoH) R10-million contract with manufacturing company Fabkomp for ambulance motorbikes fitted with a sidecar “clinic” was improper and amounted to maladministration after violating procurement laws.

Acting Public Protector Kholeka Gcaleka revealed her office’s findings on the “Scootergate” contract in Cape Town on Wednesday while releasing 21 reports, 10 of which were finalised investigations.

Mkhwebane took leave from mid-January until the end of March. Her 91-year-old mother died over the weekend.

“We found that the procurement process followed by the Eastern Cape Department of Health, when it awarded the contract to supply motorbikes with a sidecar ambulance and clinic, was improper and in contravention of applicable legal prescripts,” said Gcaleka.

The report shows how the department failed to follow proper procedure in each step of awarding the contract.

In March 2020, it applied to the provincial treasury to deviate from procurement regulations to enter into a sole-source contract to purchase the 100 motorbikes. Sole-source contracts are usually entered into when only a single supplier can provide a product. Treasury rejected the application, saying the department hadn’t submitted specifications for the motorbikes it wanted and hadn’t tested the market to see whether Fabkomp’s partner, E-Ranger, had competitors.

The department claimed it wanted the bikes to support local clinics in providing care, and to back the Qonce-based (King William’s Town)  businesses.

With its first attempt blocked, the provincial health department advertised a tender for the motorbikes in April 2020.

“On 03 April 2020, the ECDoH then changed its approach and followed a competitive bidding process. However, the period of the publication of the advertisement of the tender was still shortened from 21 to nine calendar days (with only five working days).

“No reasons were recorded by the then head of the ECDoH, Dr Mbengashe, for the shortening of the advertisement period,” reads the Public Protector’s report.

Department head, Dr Thobile Mbengashe, maintained that the shortened bidding period was due to emergency procurement regulations as a result of Covid-19. But his department issued its advertisement before the national Treasury’s advisory on emergency Covid-19 procurement guidelines. The Public Protector found there was no lawful reason to shorten the mandatory bidding period.

The Public Protector’s report said: “The concept of using motorcycles/scooters was introduced in the ECDoH before the country experienced Covid-19. The motorcycles/scooters could not therefore be treated as an emergency procurement under the guise of the Covid-19 pandemic.”

Two companies submitted bids for the motorcycle contract – Fabkomp, whose bid was R10.1-million, and Zencare, which came in at just under R13-million.

While it didn’t appear to make a difference to the contract, the Eastern Cape Department of Health bid adjudication committee awarded Fabkomp 20 points for BBBEE, while it actually scored 18, moving it from Level 2 to Level 1 in BBBEE compliance.

The provincial department agreed to pay Fabkomp R94,587 for each of the 100 bikes, reaching a total of R9.45-million, with another R690,000 for maintenance over three years.

But the bikes failed to meet emergency services standards. In June 2020, Health Minister Zweli Mkhize and former health MEC Sindiswa Gomba, who has since been criminally charged on unrelated issues, launched the “scooter ambulances”.

The bikes were fitted with a bed in the sidecar, a first-aid kit and oxygen, but that’s not what the province had agreed to pay for. It seems they simply bought bikes with a sidecar.

“The ECDoH was allegedly advised not to use the scooter ambulances as they do not meet the specific requirements, as provided for in the EMS regulations relating to minimum patient compartment space and equipment,” said the Public Protector’s report.

After attending the launch of the vehicles, Mkhize later said that they did not qualify to transport patients as an ambulance.

The Public Protector said disciplinary hearings should be held for all implicated department officials within 90 days. She made no adverse findings against Premier Oscar Mabuyane, who said he played no role in the procurement.

Fabkomp hasn’t been paid for the mobile motorcycle clinics and all orders have been put on hold. The SIU and Hawks are investigating the matter, said Gcaleka.

On other controversial issues, Gcaleka said she found no wrongdoing in the Free State’s procurement of personal protective equipment during the Covid-19 lockdown.