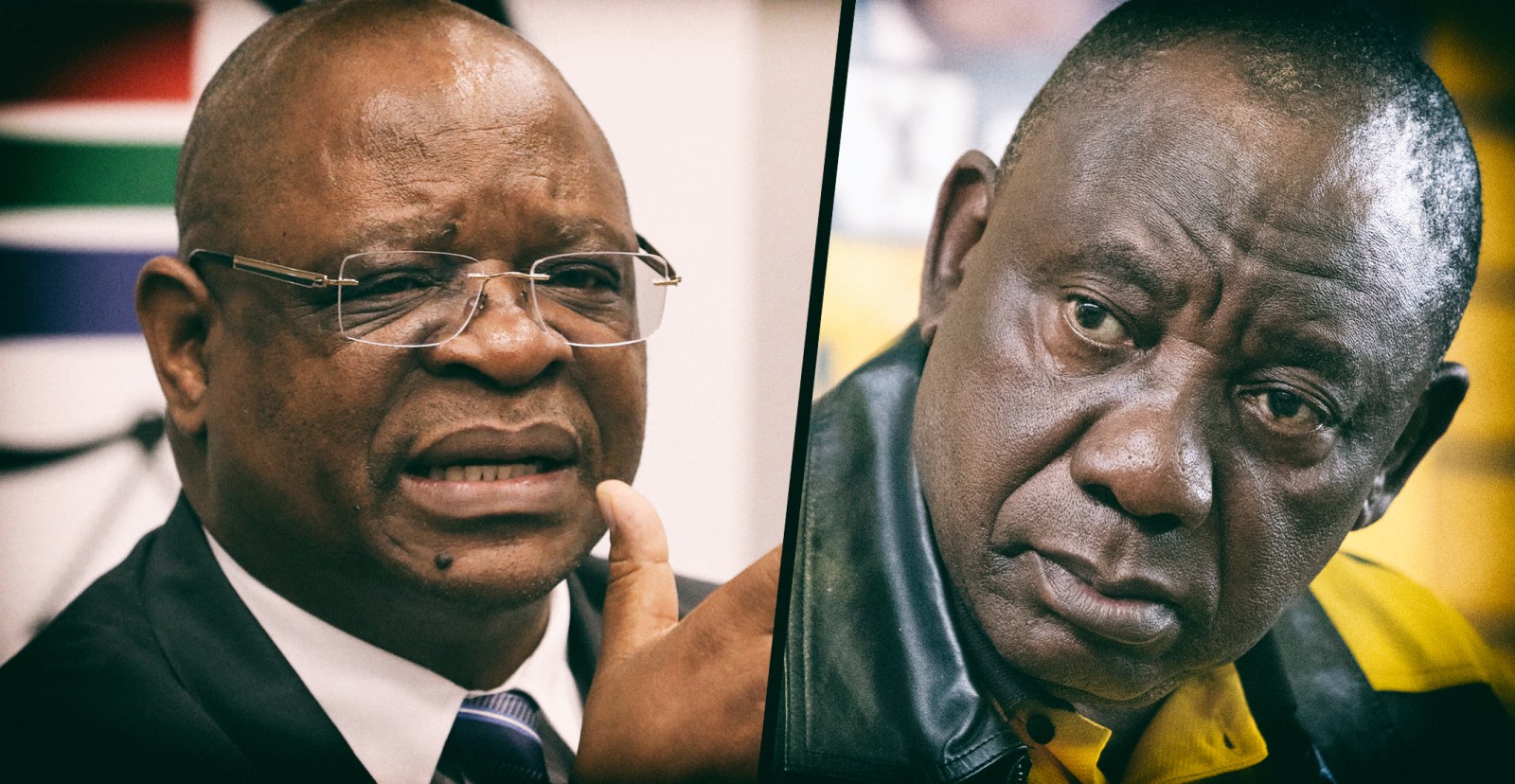 President Cyril Ramaphosa will testify under oath at the Zondo Commission. This will be the first time the ANC itself will be represented, possibly a key moment. While there are indeed massive risks both for Ramaphosa and the movement, depending on his ability to ‘save’ the reputation of the ANC, it could also be a moment of great personal reward for him.

Deputy Chief Justice Raymond Zondo has announced that President Cyril Ramaphosa will testify at the commission over four days towards the end of April, two of them as leader of the ANC, and the rest as the national president and former deputy president.

The timing is convenient in many ways. It happens to fall over the Freedom Day long weekend, so he will testify as ANC leader on Thursday and Friday 22 and 23 April, have the long weekend to regroup, and testify in his state capacity on Tuesday and Wednesday, 28 and 29 April.

The timing of Justice Zondo’s announcement was also convenient, coming just as the Constitutional Court was about to hear the commission’s argument that former president Jacob Zuma should be jailed for refusing to testify. Here was the current president agreeing to testify, while the former president was still refusing.

Of course, in terms of understanding what happened in the past, what actually happened and when, hearing Zuma’s version and him being asked questions under oath is absolutely vital. Without it, the commission will be forced to make findings based on the evidence of the 40 people who have implicated him in wrongdoing without hearing the former president’s testimony.

This will make it difficult for the commission to make legal findings.

But in terms of the political findings, what voters think about the ANC, Ramaphosa’s testimony may turn out to be more important.

And in the past, then-secretary general Gwede Mantashe testified in court, representing the ANC during the Julius Malema “Dubul’ iBhunu” hate speech trial (in a moment fraught with historical tension, AfriForum’s advocate Martin Brassey started by asking Mantashe if he knew the origins of a quote in isiZulu, Mantashe responded yes, it was uttered just before Dingaan killed Piet Retief).

So for Ramaphosa to testify for the party suggests a departure from usual practice. However, it may also be that as he has to testify in his own capacity, he may as well take the political opportunity to represent the ANC anyway.

The risks for Ramaphosa during this moment could be significant.

He was the deputy president for nearly five years, a period which included Zuma’s sacking of Nhlanhla Nene, the firing of Pravin Gordhan and others in late March 2017 (a moment that saw Ramaphosa, Mantashe and then ANC Treasurer Zweli Mkhize saying that the Cabinet reshuffle had not been decided at Luthuli House but “elsewhere”), rising levels of corruption in government, the still-alleged corruption which occurred at Eskom, Prasa, Denel, Transnet, the SABC and too many other places for comfort.

There will be many questions that will be difficult to answer, but they will all be summed up by what matters so often in situations when a politician is boxed into testifying under oath: “What did you know and when did you know it?”

This is certainly going to lead to difficult moments.

Given Ramaphosa’s position at the time, the obvious inference that he would campaign to be president, and his history in the movement and our society, it is very likely that people approached him with clear information about corruption. That people who had known him for many years, people holding their own important positions in our society, would have gone to him to tell him what was happening is obvious.

Some of those people are likely to have worked with the commission. And as a result, there has to be evidence that he did know what was happening, especially during the end of Zuma’s first and the entire second term as president.

During this time, despite the mounting public evidence of wrongdoing, the 2017 #GuptaLeaks emails and other evidence, he did nothing overt.

It appears the only moment he said anything in public about the mounting tide of corruption was when he offered his “support” to Gordhan when he was charged with fraud (a decision eventually overturned in the courts).

This has led to Ramaphosa being criticised even now, particularly as more evidence about the corruption of that period has come to light at the commission itself.

Politically, there can be a massive argument over this. Did Ramaphosa do the right thing by remaining silent, to increase his chances of prevailing at Nasrec?

Friends and colleagues can disagree on the political wisdom of his inaction during this time. But the moral question is different.

If Ramaphosa knew about corruption that was happening, knew money was being stolen, knew that poor people were suffering more every day as a result of this corruption, did he have a duty to speak up?

That silence may be the most difficult question that he will have to answer.

To put his position in perhaps the starkest terms, as the Constitutional Court reminded us in its Nkandla judgment, the president has to take an oath of office to uphold the Constitution of the Republic. But so does the deputy president.

While his oath is similar, it is a bit different to the oath the president takes. Deputy President Ramaphosa had sworn to, among other things, “discharge my duties will my strength and talents to the best of my knowledge and true to the dictates of my conscience”.

In short, the key question he may have to answer is whether he was “true to the dictates of [his] conscience”.

It is entirely about corruption that was carried out, enabled or allowed, by ANC presidents, ministers, officials and thousands of hangers-on. The ANC may have to, in some way, mount a response, provide an explanation and possibly apologise.

This is a difficult situation for Ramaphosa.

It would surely be crossing the boundaries between party and state (should such things still exist) for him to address the nation as president to apologise on behalf of the ANC.

But in his testimony at the Zondo Commission (which will probably have a very similar-sized television and radio audience to any presidential address), he will have an opportunity to do this.

He could use the moment to start by apologising to the nation.

At the same time, the party has to find some way of assuring voters that it has changed, that the corruption and incompetence that has been laid bare at the Zondo Commission will not happen again.

Only a few people might be able to fashion such an important statement which must be carefully considered. Just the question itself of whether the ANC should apologise is fraught with distinct political danger.

However, Ramaphosa has shown before, while testifying at the Marikana Inquiry (while being questioned by advocate Dali Mpofu), that he can use such a situation to his own advantage.

There is no doubt that the period of four days in April, separated as they are by a long weekend, could be a crucial moment for the Zondo Commission, the ANC as a whole, and Ramaphosa himself. How is it going to go? Only one way to find out. DM