State of Rapture – time to get real about Ramaphosa 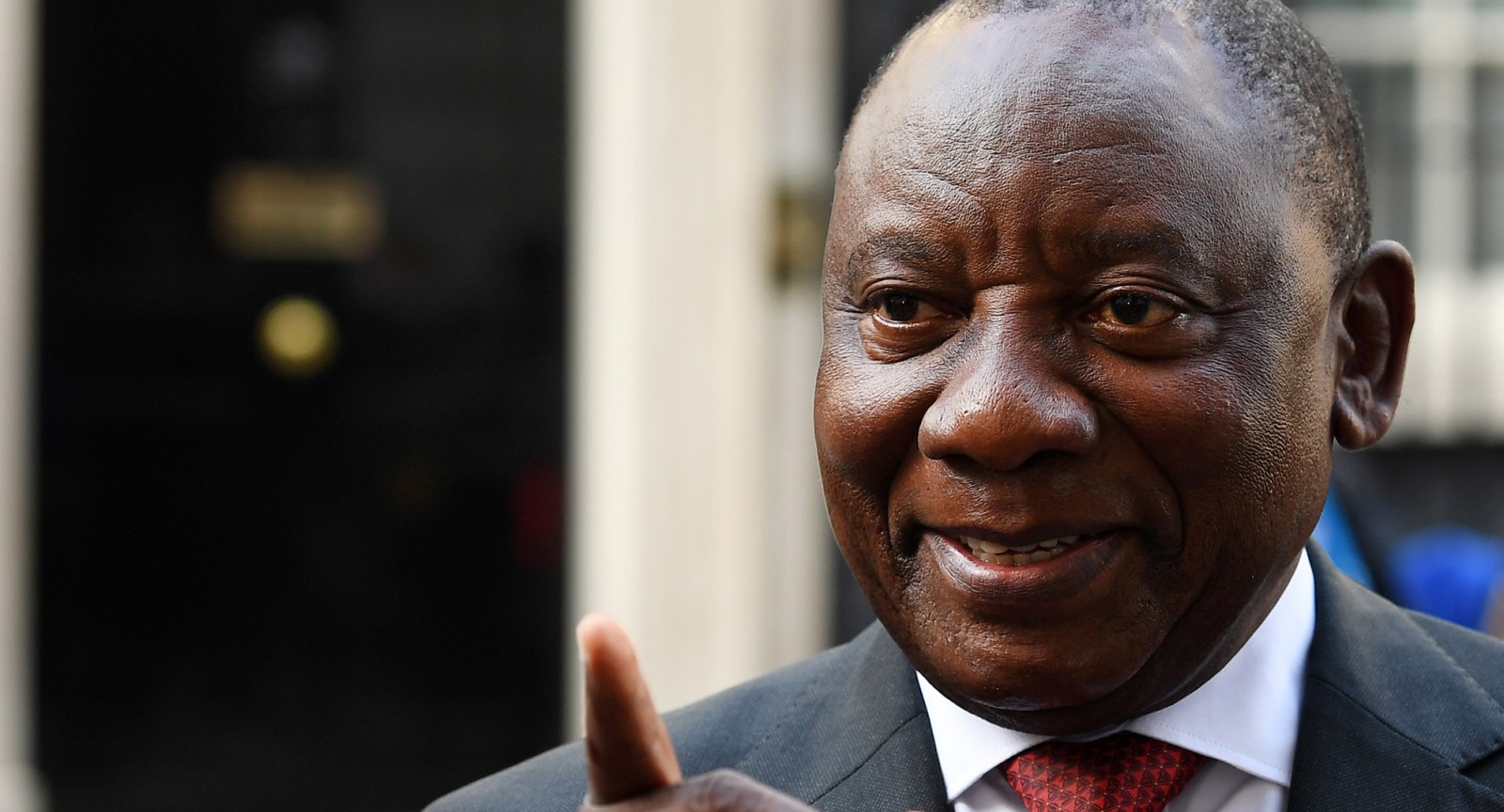 Last week, during his global trawl for R1.2 billion of foreign loot, President Cyril Ramaphosa granted the Financial Times an exceedingly rare one-on-one interview. It is a strange yet revealing insight into his character, and it suggests that the sooner South Africans terminate the honeymoon, the better things will turn out for all of us in the long run.

Well, look who turned up in London, full of good cheer and bonhomie, glad-handing Her Majesty, accepting a cheque from the Prime Minister, showing up on Fleet Street with Shakespeare dripping from his lips. Cyril Ramaphosa’s relentless charm offensive has gone global, and short of jogging with expat South Africans along the Thames, he has played as sharply on the big stage as he has on the small.

Famously, he had to attenuate his trip due to a factional flare-up within the party he now leads. The country’s progress has been hamstrung by internecine ANC patronage wars for the past decade at least, so this should hardly be surprising. But there was a genuine surprise lying in wait for us all: before rushing back to douse the fire in Mafikeng, Ramaphosa sat down with reporters from the establishment British broadsheet, the Financial Times.

As a habit, South African presidents do not grant local media one-on-one interviews, and so post-colonial wonks are forced to scour CNN or Al Jazeera or, God forbid, RT in order to get a sense of what our head of state is thinking. These interviews become sacred texts parsed over by a sect of tonsured wretches, who seek illumination where there was before only darkness—and usually end up with more darkness.

My personal favourite is the near insane softball interview Zuma granted the Chinese state broadcaster, CCTV, back in September 2016. This is where he said, among other things, that “The question of industrialisation in [Africa] has one side only, does not have a negative side.” And while he came off like Helen Zille on steroids, Zuma was a chatterbox compared to Ramaphosa, who more so than any major politician in this country has avoided being asked hard questions by local hacks. Indeed, the president’s oil-slick avoidance of direct confrontation is the thematic refrain that runs through the FT piece.

Let’s start with the suspiciously tidy Ramaphosa narrative, promulgated by his backers and apologists, and now reiterated by the president in his sit-down interview: South Africa is governed by a slow, steady, scrupulous, but ultimately deadly political player, who pounces only when it is time. When asked by the FT why it took him so long to get off his ass and do something about his former boss’s state capture project, Ramaphosa drew deeply on his pipe (not really) and told his interlocutors:

“‘There is a tide in the affairs of men.’ That quotation kept ringing in my head because many people kept asking: ‘Why are you not acting? Why are you not saying anything.’ And I kept saying: ‘There’s a time when one needs to act and, when you do take action, it should be such that you do not fail.’”

Shakespeare quotes tend to legitimize even the dumbest political bafflegabble. But what Ramaphosa is trying to do here, I suppose, is to present himself as a learned, precision killing machine, one that stands in contrast to the cunning, bumpkin brutality of Jacob Zuma, and the aloof regality of Thabo Mbeki. It’s meant to teach us that inaction is a higher form of action, that doing fuck all while the country burns is in fact the definition of wisdom. Furthermore, this is an attempt to distance himself from the disasters of the Zuma regime, while implicitly taking credit for reviving the country’s march to Sweden-ism. It’s meant to erase the dips and dives of four successive, if interrupted, presidential terms, crafting a direct conceptual link between himself and Mandela, whose dying wish it was to see his protege installed in Mahlamba Ndlopfu. (That is almost certainly bullshit, but so it goes.)

Not so fast, though. Ramaphosa, like the rest of those in the ANC who should have known better, is directly responsible for much of what unfolded during the Zuma years precisely because they did nothing. And yet, Ramaphosa is being packaged by his backers as a Zen genius. This tactic doesn’t erase accountability so much as obliterate meaning. For instance:

The tipping point, says Mr Ramaphosa, came in March 2017 when Mr Zuma sacked Pravin Gordhan, a close associate whose history of activism and technical abilities command huge respect. Mr Gordhan, now restored to the cabinet to knock sense into the country’s corruption-riddled public enterprises, was fired after publication of a report cooked up to discredit him.

“We saw that something was wrong, horribly wrong,” Mr Ramaphosa says of that period. “When we were hitting rock bottom, we needed to say something so that we could begin to recover and claw our way back.”

I mean, are you fucking kidding me? Gordhan’s firing was the tipping point? This is an unconscionable insult to Malcolm Gladwell, whose examples of historical tipping points tend not to come so late in the game. It’s like waiting for the lava to engulf your home before acknowledging that a volcano has exploded. It’s like watching a T-Rex consume your family before admitting that your neighbourhood has a dinosaur problem.

But here’s the thing. Like all the big players in the ANC, Ramaphosa waited so long not to save South Africa, but to save the ANC. Time and time again, we heard how important it was to keep the congress intact, to save it from splitting, to avoid a repeat of the Mbeki debacle which this time would surely prove even more devastating to the interests of the country’s elite. And so Zuma was swaddled in political cotton wool while South Africa’s democratic and economic institutions were degraded and, in many cases, destroyed. Meanwhile, Ramaphosa, the Hamlet of South Africa, mused over the vicissitudes of time, while the media, civil society and the judiciary were forced to keep this joint from flaking out completely.

Cyril cannot recuse himself from this mess, and he must not be allowed to do so. As the FT correctly notes, “Mr Ramaphosa has moved swiftly to consolidate power”, purging his predecessors’ toadies from state enterprise boards and ministries; tidying up some massively loose ends. Don’t believe the hype: this is the comparatively easy part. Remaking the state into something both functional and fair is considerably more difficult.

What is so galling, of course, is that South Africans have no choice but to ride the Ramaphosa wave. The ANC monolith has churned up everything in its path, and it’s preparing to make a few additional acquisitions in the coming years. (Remember the Economic Freedom Fighters? Me neither.) But the FT piece, and Ramaphosa’s trip in general, point to some troubling, recidivist trends. The president is intent on reinvigorating the defining (and most dangerous) trope of the ANC’s Mandela-ist centrist wing: “success” abroad means “success” at home. And so the charm offensive that sends our president and his “pack of lions” across the world, east and west, north and south, in order to entice politicians that think Africa is a country into pumping the magical elixir of Foreign Direct Investment into our national coffers.

Ramaphosa secured from Theresa May the pissant amount of R858 million for some business initiative nonsense (if I were a British punter, I’d be hurling pint glasses at 10 Downing Street for symbolically papering over the ANC’s Zuma-era fuck ups), to be matched by local corporates pence for pence. In other words, Ramaphosa is selling Brand South Africa to the global plutocracy, promising a tame financial administration and an adherence to hyper-liberal economic principles in exchange for cold, hard cash.

That it’s impossible for cash to stay in the country under such an arrangement never seems to occur to anyone in government, but hey—that’s South Africa.

As it turns out, Ramaphosa’s most significant policy statement was the “New Deal” speech he gave in Soweto last November. There, he promulgated a state that was a collaboration between business and government, and which empowered the black majority through a re-upped, 21st century version of trickle-down economics. In other words, the primary beneficiaries of the deal must be Big Business, who in turn pay back the state through social investment and tax dollars, which benefits those lower down the feeding chain because the economy grows and jobs become more plentiful.

We’ll see about that.

But there’s a problem here. As Ramaphosa and his colleagues have exhibited on countless occasions, their loyalty is to the ANC first, and South Africa second. There is nothing Ramaphosa won’t do to save the congress—he has proved this without a shadow of a doubt—and while he has the momentum now, he won’t have it forever. And there are many in the party who think the New Deal is a bad deal, because it favours the wrong half of the elite. Which is another way of saying that the ANC can’t really develop policy, because there’s an internal tension in the organisation that prevents it.

And besides, there’s an old truism: Never trust a politician who quotes either the Bible or Shakespeare. Ramaphosa quotes both. It’s time, I’m afraid, to get real about the president. DM