The great apes: Pioneering study shows bonobos will adopt infants of another group 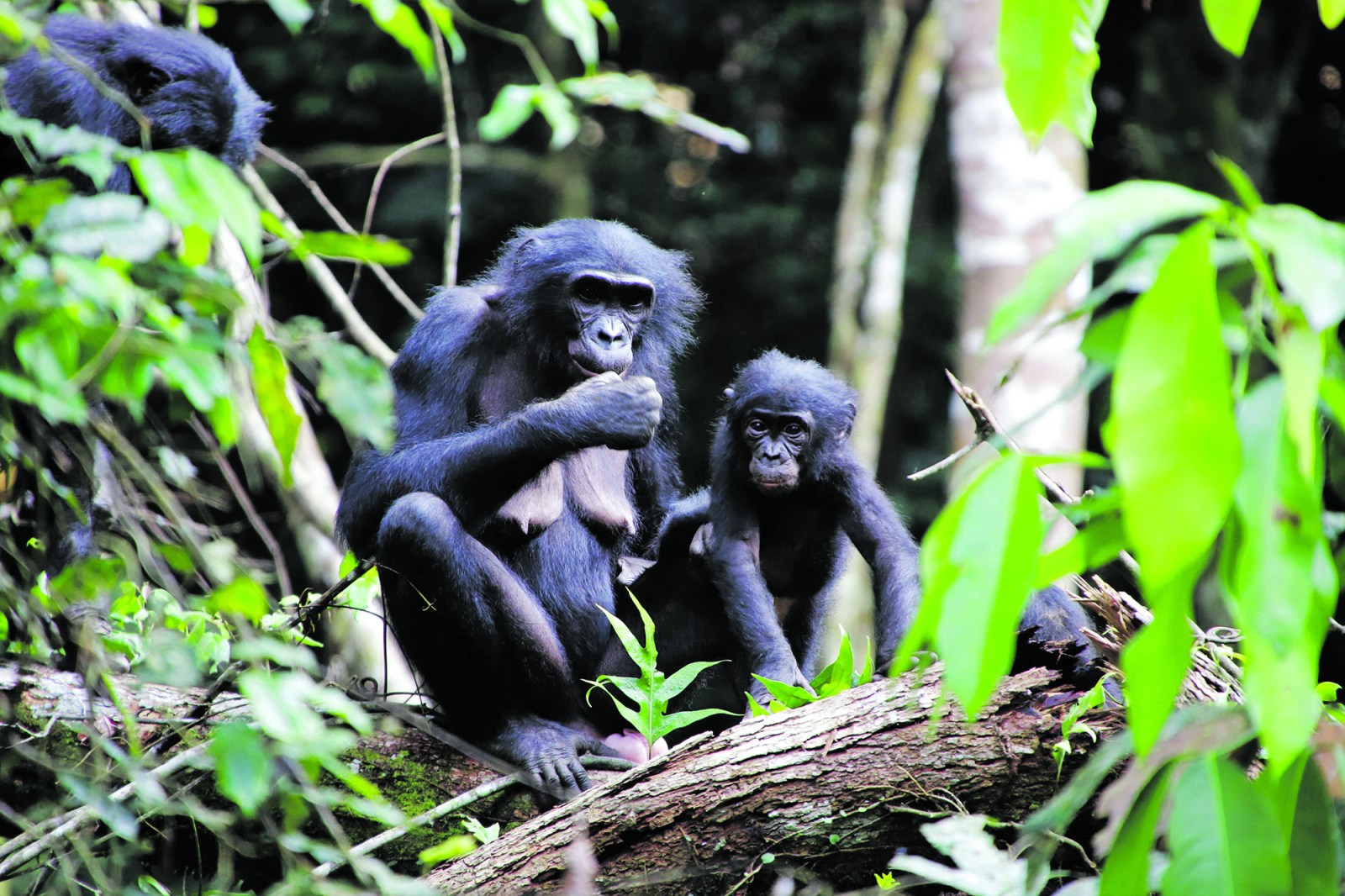 Marie with her infants. Bonobos carry their young until they’re weaned at around four or five years. (Photo: Nahoko Tokuyama)

Bonobo mom Marie was caring for two of her own offspring when she adopted another’s infant – and nursed her. Fifty-something Chio adopted a three-year-old from a different group.

Observations of groups of wild bonobos on a reserve in the Democratic Republic of Congo showed something extraordinary: two female bonobos permanently adopted infants from a group other than their own.

These are potentially the first two cases of cross-group adoption in wild apes, according to research published in the peer-reviewed journal Scientific Reports. Only one case of adoption had been reported in wild bonobos: a four-year-old male infant who was adopted by his older brother after their mother’s death and survived for less than two years.

The Wamba Forest, where research has been ongoing since 1974, is home to four groups of bonobos.

Marie, an 18-year-old female from one of the groups, gave birth to Marina in 2014 and in 2017 to Margaux. According to the study, the physical and social developmental stages of bonobos are similar to those of chimpanzees. Infants are carried by their mothers until weaning, at four to five years, and they maintain a close bond beyond this time. If a mother dies before the infant is five years old its chances of survival are slim. Physical, cognitive, emotional, and social development can be impaired in both bonobos and chimpanzees without the care of a mother.

While Marie was still caring for two biological offspring, she permanently adopted Flora, who was two years and seven months old at the time. Flora is from another group and her mother had visited Marie’s group two years earlier for a few days. Yet genetic testing of their faeces showed Marie and Flora are not related.

Marie cared for Flora along with her biological offspring, which included constantly staying in close proximity, carrying, grooming, sharing food and nesting together. Marie also showed typical maternal comforting behaviour towards Flora: she embraced her.

She carried Flora under her belly and Margaux on her back, or carried both infants on her back while Marina walked independently. And, most uniquely of all, she nursed Flora.

Marina and Margaux did not behave aggressively towards Flora and the researchers often observed the three infants playing together. But Marie did groom her own offspring more. It is not known what happened to Flora’s biological mother.

Although bonobos of different groups can be tolerant of each other, the males especially may act aggressively and form coalitions to attack individuals of other groups. But severe aggression has not been seen. Sometimes they mix for a few days and then go back to their groups. Young females often join other groups.

In October 2019 another bonobo, Chio, estimated to be between 52 and 57 years old, adopted Ruby, a three-year-old from an unknown group. Chio had not given birth since her last infant in 2012 and the researchers assumed she was post-menopausal. DNA analysis of faeces revealed that she had no living offspring in three of the four groups.

Chio constantly stayed in proximity to Ruby. She carried, groomed, nested together with and comforted her by hugging her. When Chio initiated travel, she waited for Ruby and carried her. Although Ruby frequently played with other infants, the researchers did not observe grooming or any other maternal behaviours towards Ruby from adults other than Chio.

The Covid-19 pandemic forced the study to end. Local assistants did report on Flora and Ruby twice.

Adoption might incur considerable costs to adoptive mothers. Marie might have experienced particularly high costs because she already had two dependent biological offspring, according to the study.

Kin selection is considered to be the primary mechanism for the evolution of adoption, but not in this case. It could have been driven by the bonobos’ altruism, strong attraction to infants, and social tolerance of individuals who are not members of their own group. DM168