Swimming against the Vaal’s rising tide of sewage: Standerton snafus stir up action 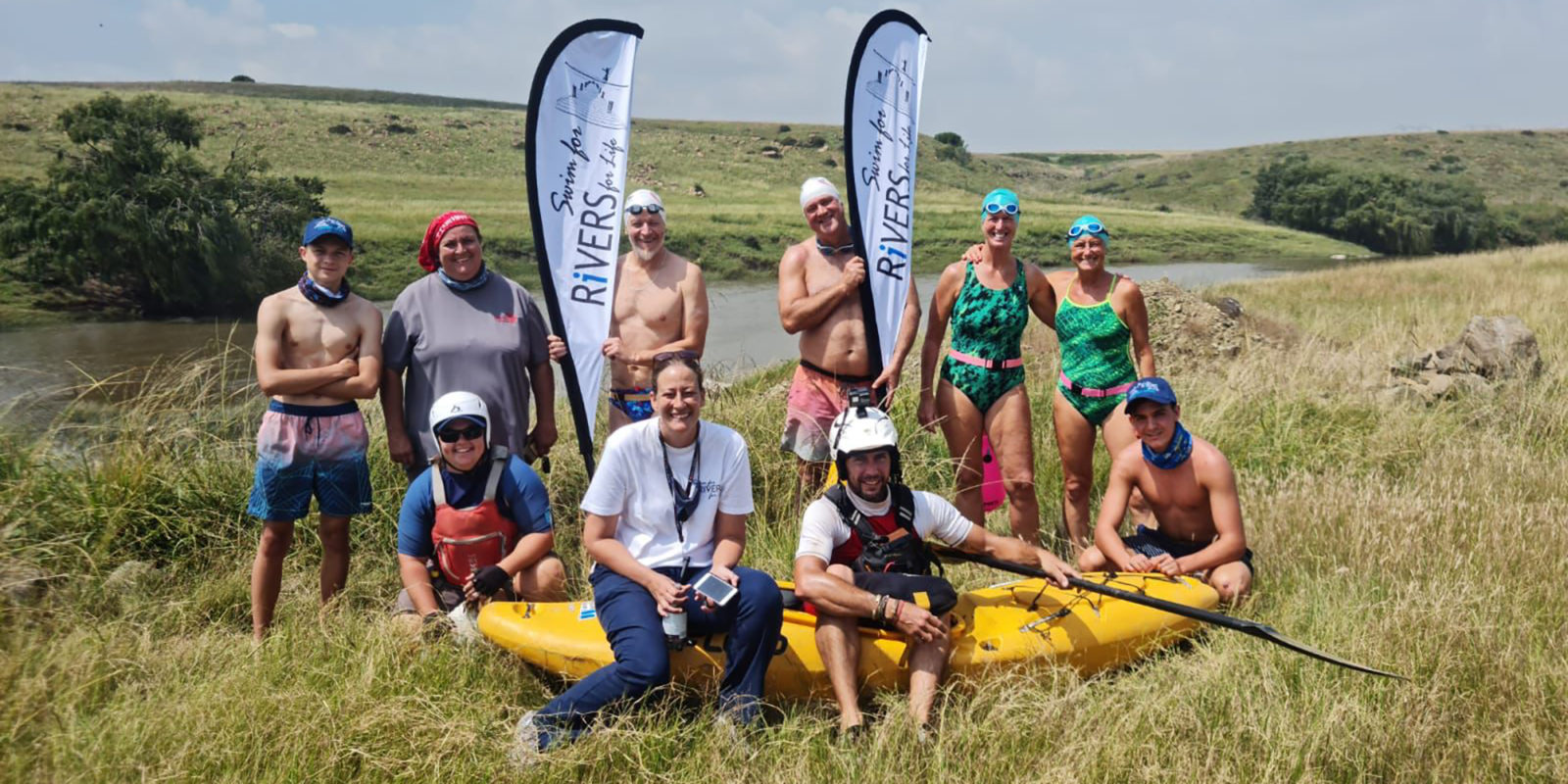 The Swim for Rivers team after the first day of their Vaal River swim. (Photo: Supplied)

An intrepid band of activist-athletes are drawing attention to a pressing pollution problem, with their latest target the Vaal River that flows through the Mpumalanga town of Standerton.

A swim in the Vaal, South Africa’s third-biggest river and in places, one of its yuckiest, is not to be done on a whim.

For one thing, it can be a little whiffy.

“There was a bit of a dead carcass smell in the area,” says Andrew Chin, who on a recent late summer’s weekend put on his Speedo and plunged into the river, a little above the Mpumalanga town of Standerton.

With three teammates, he completed two stretches of the Vaal, swimming a total of 14.5km over two days. The swim was the culmination of a year’s planning, backed by plenty of experience.

Chin, 52, has been kicking about in water for a long time: “We used to swim in the rivers when I was a kid, 40 years ago. Now that basic right has been taken away from us,” he says.

The official findings bear this out.

According to the Department of Water and Sanitation’s State of Rivers Report, rivers are in poor condition in densely populated parts of the country. It’s the consequence of poor management and maintenance of wastewater treatment works.

“Waste discharge poses major risks for aquatic and human health and is one of the largest contributors to the deterioration of water resources,” the report noted.

Chin, a tall, determined Capetonian, feels so strongly about the problem and the need to preserve and protect our waterways that in 2015 he started the not-for-profit, Swim for Rivers. With support from volunteers and back-up from Impact Adventure, they set out to tackle a section of a river in a different province every year, and to use the swims to grab public attention and galvanise action.

This, pretty much, has played out. And Chin and others have completed swims in the Wilge, Orange and Mtamvuna rivers. So why the Vaal and why at Standerton?

Water under the bridge

As Chin explains it, about 19-million people depend on the Vaal for their domestic, commercial and industrial needs, particularly in Gauteng. Yet according to the South African Human Rights Commission, the Vaal is polluted beyond acceptable standards.

Standerton was established at a drift on the Vaal before the First Boer War and was once the constituency of Prime Minister Jan Smuts. The town is today the seat of the Lekwa Local Municipality, which has drawn strong criticism from residents and media exposure for its failure to get to grips with basic maintenance and service delivery.

Many of its streets are potholed, with raw sewage running into the Vaal.

On day one, the team completed 9.5km from the confluence of the Blesbokspruit with the Vaal to the entrance of the Grootdraai Dam.

They were pleasantly surprised to see relatively little litter. However, Chin was careful to point out that this did not mean the problem had gone away, but that it may have merely floated downstream.

On the following day’s swim, from below the dam to the outskirts of Standerton, “there were signs that the river had recently come down, because there was quite a bit of plastic decorating the trees”.

The swimmers picked up the smell of what may have been a carcass below the dam, but Chin noted this did not necessarily mean it was in the water.

They had been warned not to press on to Riverpark. The former beauty spot, close to the town centre, was once popular with families, picnickers and fishermen. Now, however, locals say it’s a “danger zone”, with garbage everywhere and the stench of raw sewage emptying into the river. Instead, the swimmers got out at Waterfront, on the outskirts of Standerton.

The following day, Sunday, the four led a river clean-up, with 11 volunteers pitching in to help. They included members of the Lewka Clean Up Crew, a local organisation that is sponsored by a small group of businesses to pick up garbage, occasionally fix potholes and cut grass at intersections.

In an hour, the group filled 90 bags of rubbish, yet according to Chin, “barely scraped the surface of pollution along the river”.

Wilma Venter, 35, a Standerton resident and community activist, was among them. She has fought a more than two-year battle with the municipality over the state of the town.

Last year, she started Surviving Lekwa, one of a number of community-led initiatives and WhatsApp groups in Standerton tackling pollution and problems with water, electricity, refuse removal and municipal account errors.

“We assist with whatever we can. We clean dumping sites and fix whatever we can. We ensure the community knows of any municipal information that they need, and we report and follow up on their issues. And when they have account problems, I go in on their behalf to have this solved,” says Venter.

She believes the wider public are ignorant of the state of the Vaal, particularly at Standerton.

“I don’t think the majority of people even slightly realise how much pollution goes into the Vaal River,” Venter says. “The Bergenheim manhole (in central Standerton) has been blocked for so long that it’s created a knee-deep stream of sewage that flows to the Vaal, which is visible from Google Earth.”

It has got so bad that more than two years ago, the North Gauteng High Court ordered the Lekwa municipality to “cease all raw sewer waste spillage into the Vaal River”; to immediately unblock all manholes in Standerton’s Rooikoppen Extension township; and to cease spilling sewage into the township’s streets.

The order, which was sought by the Minister of Water and Sanitation and made final in October 2018, also required the municipality to repair the town’s wastewater treatment works and five sewerage pump stations.

Venter said the municipality initially made an effort to comply and did some repairs, but within about two months, the problems were back and there have been further breakdowns.

“It’s worse and now it’s all over, not just in Rooikoppen. It’s everywhere… shit in the streets,” says Venter.

Officials from the Department of Water and Sanitation made a number of site visits in 2020 and drafted reports, says Venter, but nothing has come of it. Roving Reporters sent Lekwa mayor Lindokuhle Dhlamini and Municipal Manager Gugulethu Mhlongo-Ntshangase a list of questions, asking what action was being taken to stem the leaks and tackle water pollution, but no response was received.

Residents are now in the process of seeking a court order of their own, compelling the municipality to fix the problem.

Marweshe Attorneys confirmed they had collected 104 witness statements and are representing residents, including children, elderly and sickly people.

They sent a letter to the municipality demanding it provide an undertaking and a plan to fix the spills. But their 12 March deadline passed without a response and the firm is now finalising an urgent high court application seeking relief.

Later, they will seek compensation for residents whose health had been harmed, property damaged, businesses affected, and human rights violated, says Tony Mathe, a lawyer who is assisting Marweshe Attorneys.

Among the victims they are representing pro bono is an eight-year-old girl who fell into an open manhole in February. The manhole, in a residential area in Schwichardt Street close to the centre of the town, has been overflowing with sewage for the past two years.

The child’s father and uncle were close by at the time and came to her rescue. After that incident, residents dragged a concrete block over the hole to prevent others from falling in. Venter alerted the municipality and the Department of Water and Sanitation about the incident and the overflowing manhole, but says nothing has been done.

The department was asked to comment, but a response had not been received at time of publication.

This is not to say that things are beyond hope.

Despite the Vaal’s reputation, the swimmers enjoyed themselves.

“The river life was quite spectacular. There were a lot of fish eagles and kingfishers,” says Chin, who was buoyed by the efforts and generosity of some locals.

Based on his river swims over the past six years, Chin said he felt that South Africans were often happy to make cash contributions to worthy causes but not as eager to tackle problems themselves.

He said there was a “general apathy among people”, calling for efforts to encourage behaviour change and for the creation of a “different kind of ethos”.

“The Standerton community is not alone. They’re one of many small communities having this problem,” says Chin.

“They say that the Vaal is damaged beyond repair… I’m not a water scientist, but I know that rivers can repair themselves. People just need to start taking action.” DM

UK to recognise animals as sentient and ban trophy imports

Look to the sun: A home-grown solar industry key to a just energy transition