‘A magic pill for change’: How the power of story offers salvation in polarised, disenchanted times 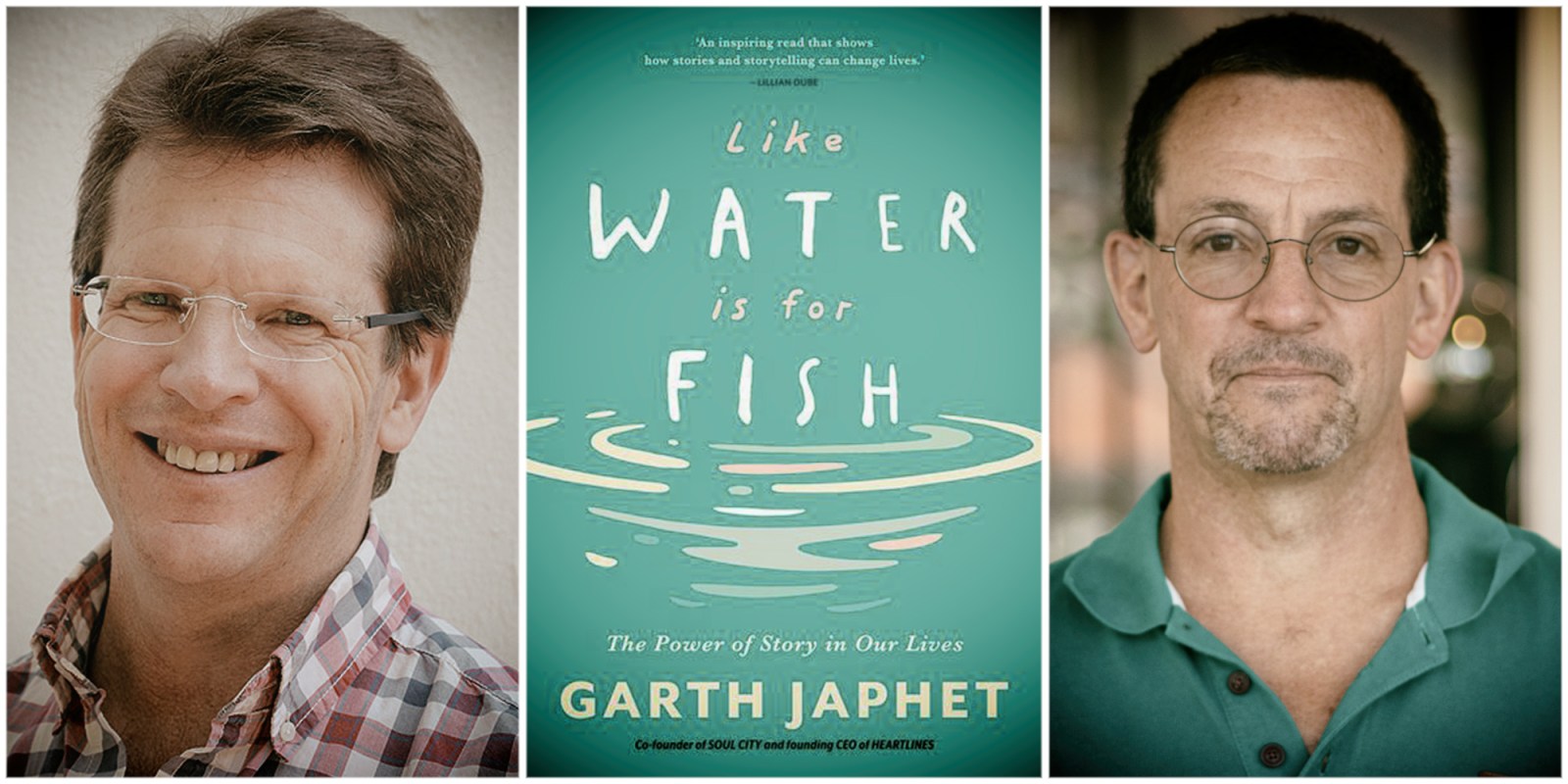 Fish need water to survive and humans like Garth Japhet need stories to do the same. His newly released book, ‘Like Water is for Fish’, tops up the water level.

Garth Japhet is a medical doctor, but he’s not out to save anyone. What he might do though is listen to you. And in hearing your story he might find a little salvation for himself.

Japhet’s newly published book is Like Water is for Fish (MacMillan). It’s a celebration of story and story sharing as the essence of human existence and connection. It’s also an open-hearted and humble reflection of a personal journey.

These days Japhet’s many roles are tidily summed up as co-founder of Soul City, the internationally acclaimed multimedia edutainment project with its equally successful offshoots. He’s also CEO of NGO Heartlines, a platform for change-making and impact for good. It uses storytelling as a key tool in its campaigns. But behind the titles and what gets squeezed into a bio is dimension, context and something with a more authentic pulse.

He’s used his book to confront his failings and fears and the moments he, as a Christian, didn’t believe God existed at all. He’s open about burnout, his anxiety and depression that turned to dark debilitation. There’s the cruel stab of being made invisible, like the time he ended up in Davos and was treated like pond scum by flashier fish swirling at the World Economic Forum. And there’s the heartache of relationships inextricably intimate but also fractured.

“Part of writing this book was because I thought telling my story might in some way help someone else. I believe there isn’t a personal story that doesn’t hold a seed of truth that can help someone else,” Japhet said at his virtual book launch held via a Daily Maverick webinar on Thursday. In conversation with Maverick Citizen editor Mark Heywood, he told how it was stories that put him on the path of medicine. He was inspired as a teenager by The Jungle Doctor series of books.

“I was not very good at maths, I didn’t do biology. I also had acne and braces and had dropped out of several schools. I was a teenage failure but I knew I wanted to be like this hero doctor I was reading about, travelling across east Africa, healing people and having adventures.”

These stories were inspiring enough for him to work through “fainting at the sight of blood” and to push on to graduate. The young doctor, who had also just completed military conscription, was thrust into the “nightmare” and virtual “war zones” of clinics in KwaZulu-Natal and Alexandra township in Jo’burg North. He watched babies die of diarrhoea and he patched people up only to send them back to the doomed circumstances that brought them to the clinic in the first place. It neither felt like adventure nor anything heroic.

But Japhet didn’t look away. It gave him perspective and empathy to really see others and their realities. And when he reflected he knew he needed to take action and that it should leverage his particular combination of skills. It’s how he found himself walking into the Sowetan’s offices, meeting legendary editor Aggrey Klaaste and offering to write a column about health issues. Klaaste said yes and so Japhet had a platform to rework science and health information into stories – saving lives through words. It’s from this collaboration that Soul City would eventually be born.

“Stories are the magic pill for change. Neuroscience shows that we are emotional beings,” he says.

Japhet’s book is written in an easy style, even when he deals with mental health, the frustration of tone-deaf would-be funders and the hangovers of apartheid, now still far from sober.

It’s not strictly an autobiography, nor is it a memoir. While it’s his story, he has also constructed his book in true Japhet character: connecting and building community with others who use story as salve, as ways to shape the world and as personal superpower. Japhet writes that for cartoonist Jonathan Shapiro, monsters stalked his boyhood dreams. Shapiro’s mom urged him to draw the nightmares and as he did he was “taking ownership of the fearsome creatures in his dreams, thereby changing the narrative”.

For musical artist Zolani Mahola, former lead singer of Freshlyground, story set to song is how she says unsayable things, especially things unsaid in her family. Japhet writes that Mahola’s mother died when she was just six years old during childbirth, and her heartbroken father never talked about his beloved wife again. Her song Nomvula pulls in her listeners for the “long tale” she shares. It’s a longing and love story to drown out the silence of what’s still unanswered. Master storyteller Gcina Mhlophe weighs in on Japhet’s book with recognition that story is a thread that binds: “We will happily travel with you [Japhet] to the magic story island.”

But for all the community building and the magic, the world can also feel like it’s pulled apart, polarised, disenchanted as populism and nationalism surge. It’s too easy for assumptions and prejudice to muscle in. People are policed, told to stay in their lanes, labelled then cancelled in the few dozen characters of a Twitter disagreement. And in a time of Covid-19 lockdown there’s also isolation and anxiety in devastating overdrive.

Heywood said: “I’m feeling increasingly atomised – employers don’t know their domestic worker’s story; colleagues who sit across from each other don’t know each other’s stories. Things are so shocking it’s as if we need to inoculate ourselves against fully thinking too deeply of the people around us. I think of the waste reclaimers on my morning run. I know they are just like me – they feel pain, have children, have dignity and they have stories.”

Japhet’s approach to looking at what can seem like pits of doom and hurt is to just look – to see, exactly like the isiZulu greeting sawubona, he said.

“Sometimes just asking someone their name makes a difference; you see them. When we listen without judging, without thinking we have to fix anything, we give the gift of respect and attention. And then if we are brave enough we can share some of our own story, if asked.”

Japhet writes that story is “the vehicle for transformation”. Good stories invite you to stay a little longer, to journey deeper and to be open to be changed as you stay the course till the end. Like Water is for Fish is this kind of invitation – say yes. MC/DM