Life happens … when you face a cop with a gun

Life happens … when you face a cop with a gun 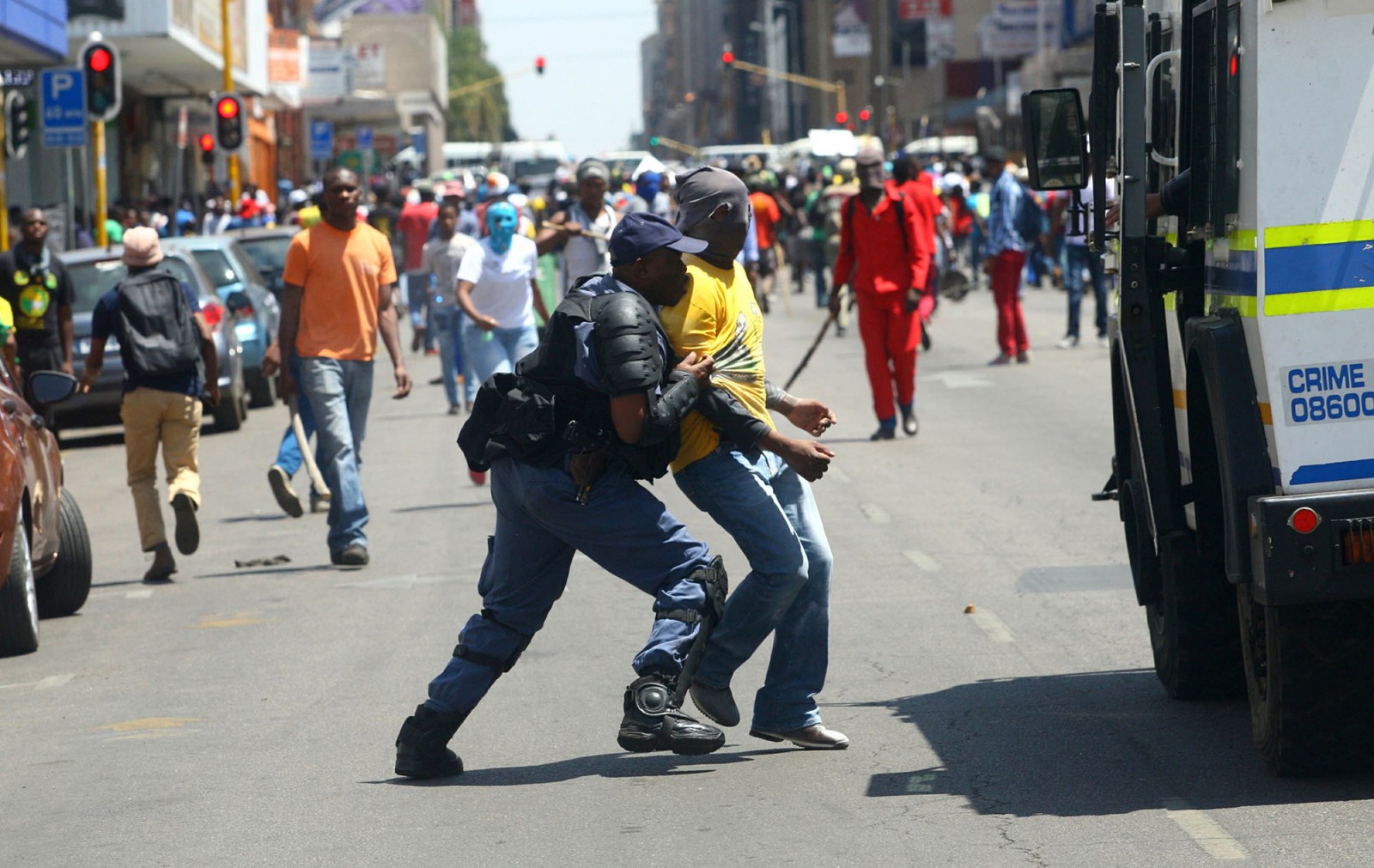 PRETORIA, SOUTH AFRICA ñ OCTOBER 12: Tshwane University of Technology (TUT) students clash with police at the CBD during #FeesMustFall protests on October 12, 2016 in Pretoria, South Africa. TUT protesting students attempted to shut down the Pretoria CBD, but have been met by resistance from police who have discharged rubber bullets and stun grenades to disperse them. (Photo by Gallo Images / Sowetan / Veli Nhlapo)

You got to understand the rules

Promise me if an officer stops you’ll always be polite

Never ever run away and promise mama you’ll keep your hands in sight – Bruce Springsteen, 41 Shots

March 10 2021. Mthokosizi Ntumba, 35, is fatally shot in the chest when police fire rubber bullets at protesters in Braamfontein, Johannesburg. Mthokosizi was leaving a doctor’s rooms.

August 19 2020. Nathaniel Julius is shot after he fails to respond to police questioning. Police were in a battle with gangsters in Eldorado Park. Julius had Down’s syndrome and died with a biscuit in his hand.

July 31 2020. Leo Williams, 9, is fatally shot in the head when police fire rubber bullets at protesters in Laingville on the Cape West Coast. Leo was watching television in a shack.

Mthokosizi, Nathaniel, Leo and others open wounds for us, remind us of what could have been, that we ducked a fatal rubber bullet.

The WhatsApp pinged on my phone.  “Is *S okay,” our friend asked. The adrenaline and nausea shot through me like an arrow, sharp and painful, landing in the pit of my stomach before travelling through my heart and across my skull. My hand trembled as I called my son. No answer. I called again. No answer. My friend called again: “They shot him with rubber bullets.” The adrenaline returns, now as a river – raging, angry. My phone lights up… it’s a “please call me” message from my son.

He answers right away. His voice is strangely calm. Our child, our everything. “I am okay Ans, I am almost home. I am okay.” I muster everything I have to stay calm, to not let him hear the panic, the terror, in my voice.

I called my partner, who was working from home that day. I try to keep my voice calm, “G, all is okay, but *S has been shot at by police with rubber bullets. He is okay. He’ll be home shortly.”

“What do you mean!?” she shouts, before spotting him at the gate. “Take him to the doctor, take him right away,” is all I can get out.

My mind races. *S arrested. *S shot at with rubber bullets. It doesn’t add up.

My son was, at the time, a third-year student at the University of Cape Town. He’s a conscientious, peace-loving human. A young, opinionated, humble, kind, loving, beautiful young man who is trying to make sense of our cruel, crazy, beautiful world. A young man who only sees the beauty in people, who does not have a bad word to say about any individual. A young man who, that day, joined the vice-chancellor, varsity leadership, academics and students in a peaceful protest outside Parliament.

A youngster who, at the time, had found his own quiet, dignified, peaceful way to participate in the raging student debates around #FeesMustFall. A young man who has had to cut his own path, but has chosen the path of peace, love and compassion.

Life happens when these men eventually free the terrified girls.

The gaping, bleeding wound on his back healed, but the scar remains. When our doctor saw him, she cried. The trauma, the memories will never leave. As parents we are tormented by thoughts that we failed to protect him.

I winced when I saw the swollen, bleeding wound. I still feel anger, terror, sadness, devastation all within seconds. I feel revengeful. I feel sad when my son says he will never go on a peaceful protest march again. I feel empty when he says he does not think policemen are there to protect us. I feel dizzy when his hands tremble at the presence of men in uniform. I feel angry for the unseen wounds he carries. I have no answers when he asks why it happened; they were peaceful, taking part in a gathering also attended by the vice-chancellor, academics and students.

As a family, we tried to seek accountability, but the system wears you down and the trauma of revisiting it becomes too much.

If nothing else, I want those men to say sorry to my son. I want them to say sorry to the families of Mthokosizi, Nathaniel and Leo. But, most of all, I want the shooting to stop. Our law enforcement officers are no longer only targeting those breaking the law, but terrorising those who claim their peaceful, rightful place in our communities.  It is time to serve and protect, not kill and terrorise. The shooting needs to stop.

No secret my friend

You can get shot just for living in

Forty + one rubber bullet shot (with apologies to Bruce Springsteen)