When will you get a vaccine? 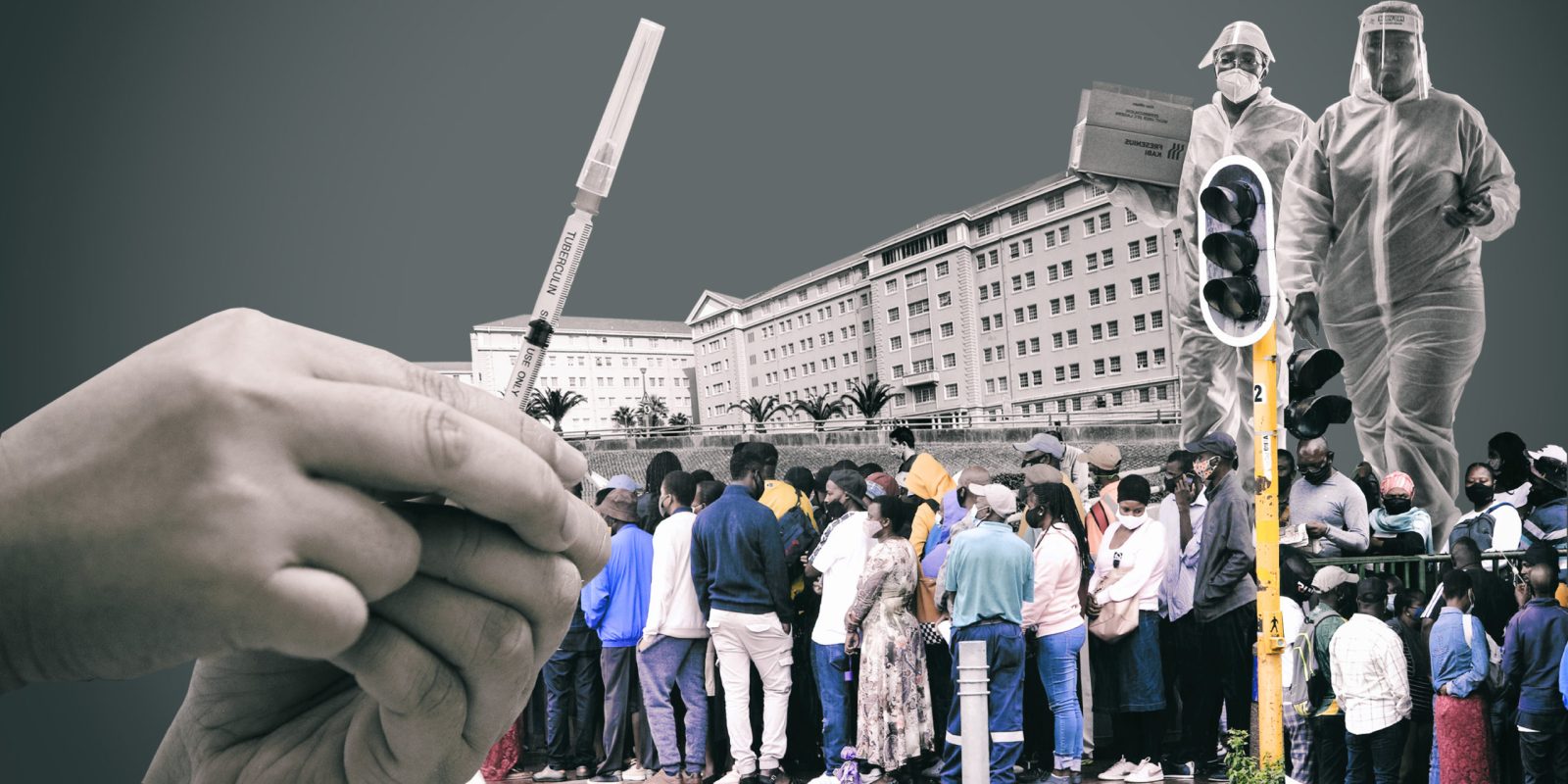 In 18 years and 16 days on current rates, according to a new vaccine calculator. But the government’s vaccine czar says the schedule is running on time, and the jab rate should pick up.

To end the Covid-19 pandemic, we need to get vaccinated. But if the current vaccination rate becomes the average, it will take 18 years and 16 days to reach a herd immunity of 67% of the population. The Media Hack launched a vaccination calculator on March 15, and it calculated that if the current rate of vaccines becomes the norm, we should reach herd immunity by 2039.

Professor Barry Schoub, the chairperson of the government’s vaccine ministerial advisory committee says: “It is what was originally planned – we are doing about 10,000 a day.”

In an interview with the Daily Maverick, Schoub said that Phase 1 of the national vaccine plan is slow because it is still a trial being run with Johnson & Johnson’s single-dose jab for healthcare workers.

He says that Phase 1 should be completed by the end of April, with 1 million of the total 1.2 million health workers inoculated. “We are not vastly behind,” says Schoub.

A second vaccine calculator, the Omni vaccine calculator, I tried shows that if the government’s three-phase vaccine strategy works as it says it will, then I will get a first vaccine dose between 1 August and 10 December this year. I fall into the mass category of South Africans scheduled to receive a vaccine in Phase 3. We are adults under 60 years without comorbidities and not doing essential services or living in congregate settings.

The vaccine calculator developed for South Africa by Omni’s Elem Oghenekaro allows you to input your details to throw up a date for vaccination. It’s useful up to a point because the data it is built on is based on the government’s planned strategy, not on the actual execution. You can customise a vaccine rate to update it and Oghenekaro says it is a dynamic tool that will change as the strategy changes.

Export controls imposed on vaccines in the US and Europe can impact South Africa’s supply lines (see graphic). “We are certainly victims of vaccine nationalism,” says Schoub. “It is unfortunate that vaccines are treated as a commodity, and they should not be. Middle-income countries (like South Africa) are victims,” says Schoub.  A proposal for an emergency amendment to global intellectual property rules (the Trips amendments) to allow for vaccine production of patents was kicked into touch at the World Trade Organisation by rich nations earlier in March. So, South Africa is stuck with a slow roll-out in the first quarter. 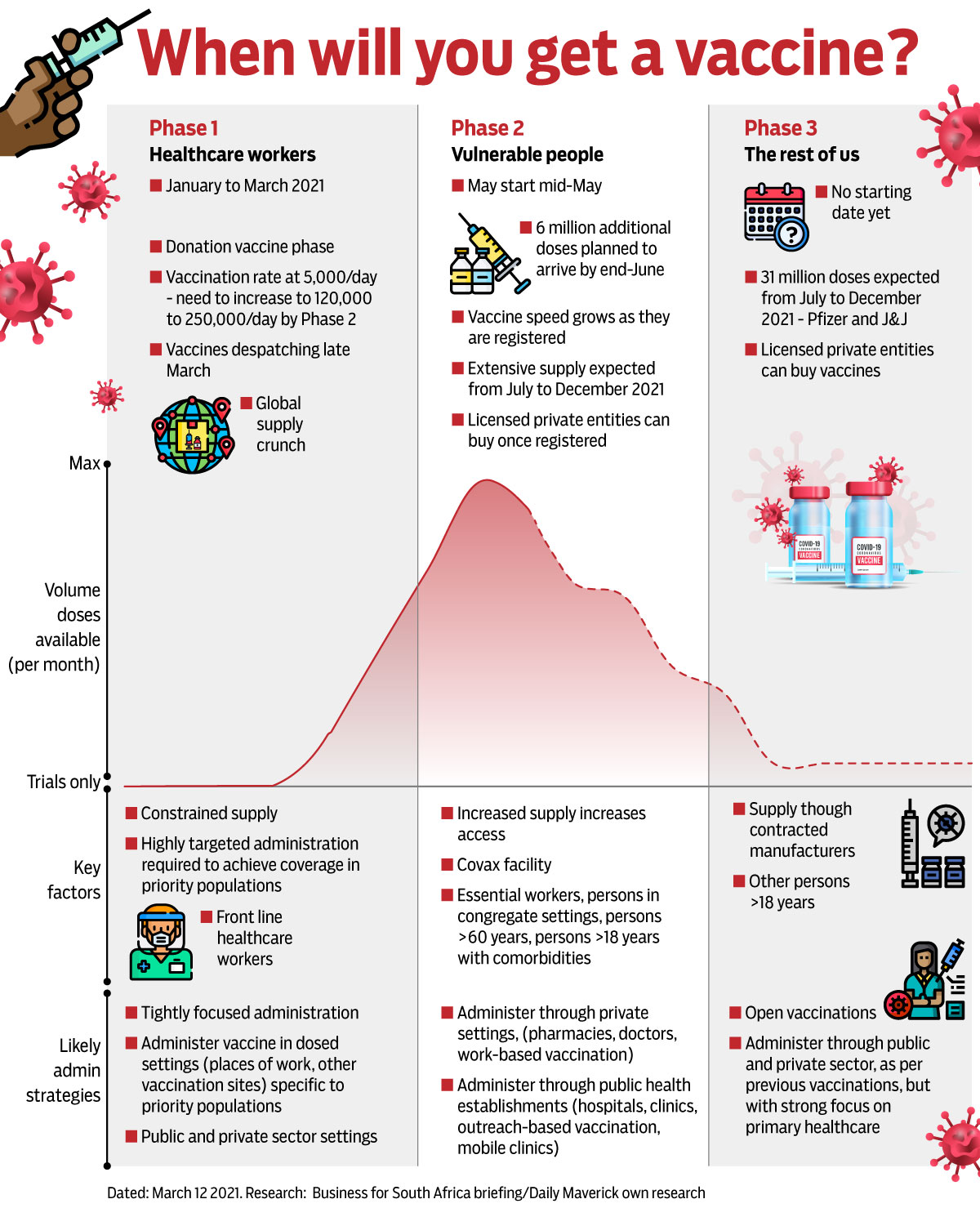 Elderly, essential, those with comorbidities and in crowded settings from May

Schoub says the government is still banking on completing Phase 1 at the end of April. But at Phase 2, jabs need to increase to between 120,000 to 150,000 people a day if South Africa is to ward off repeated waves of infection and meet the target for herd immunity, which is calculated at 67% of the population. The numbers vary, depending on whether we use Johnson & Johnson, a single-dose inoculation, or Pfizer, a two-dose jab.  The 2021 vaccine plan is currently built on these two vaccines, with no indication of whether the Oxford-AstraZeneca product will be used.

To keep on track, the vaccine plan will need 6 million doses by the end of June. This is still on track, the Health Department’s deputy director-general, Anban Pillay, told a Business for South Africa (B4SA) briefing on 5 March. The graphic shows that vaccines in Phase 1 are slow because the batches are Johnson & Johnson trial or donation product. In Phase 2, the plan is to ramp up considerably – as the graphic shows. Still, Aspen Pharmacare executive Stavros Nicolaou, who knows the global drug markets well, says there are “significant supply constraints”.

President and CEO of the South African Medical Research Council Professor Glenda Gray says vaccinations will gather speed once they are registered with the SA Health Products Regulatory Authority (Sahpra), which is likely to be done by the end of March or early April.  Private organisations (like registered companies, medical aids, pharmacies, healthcare sites) will be able to buy vaccines once they are Sahpra-approved, which will decentralise vaccinations and help to accelerate the numbers. There are currently 13 private sites for healthcare workers and, as South Africa enters Phase 2, there should be a good mix of private and public sector vaccine venues, including hospitals, clinics, vaccination centres, accredited workplaces and mobile clinics.

What seems very likely is that Wave 3 of Covid-19 infections will arrive before Phase 3 of the vaccines.

There is no starting date pencilled in for Phase 3, the mass vaccination roll-out or the “open vaccination” phase and, if supply is constrained, the date can get pushed out. Oxford-AstraZeneca jabs have been put on hold in several countries after initial studies showed increased blood-clotting in older patients. Still, the company said at the weekend that its own studies showed this was not true. A large portion of South Africa’s vaccine supply is this vaccine from the Covax facility, a cooperative vaccine-buying plan and the major supply chain for Africa.

The elderly, or the essential workers?

The debate in vaccine advisory groups, which help the government decide on policy, is whether to prioritise the 5 million South Africans who are over 60 years or the country’s essential service workers, who keep the machines of state and the economy ticking.

B4SA says it supports the elderly getting the first slots in Phase 2 as our elders are three times more likely to be hospitalised with Covid-19 and, tragically, 15 times more likely to die. The first phases of the vaccine plan are targeted at preventing deaths and reducing the pressure on hospitals.

“The highest risk group is the elderly. My purely personal view is that the elderly should come first,” says Schoub, who says the data show that Covid hospital wards had a majority of older patients in the first and second waves. In crowded settings like informal settlements, student housing, drug treatment centres, homeless shelters and prisons, the potential for superspreading is high and this group, together with people with comorbidities like diabetes or asthma, will be prioritised.

There should be a significant supply in the fourth quarter of 2021 as vaccine manufacturing is ramped up. If activists succeed in showing that the pandemic will not end if vaccine apartheid is entrenched. The virus skips borders very quickly, and more progressive Western nations have promised to make the multiples of additional shots they have ordered available to the rest of the world.

South Africa may be halfway towards herd immunity, but there are many variables and nobody is sure. The latest study released on 12 March to track seroprevalence or the presence of antibodies in the general population shows a prevalence of 35.8%, according to the National Institute of Communicable Diseases. The World Health Organisation says: “Seroprevalence studies are conducted to measure the extent of infection, as measured by antibody levels, in a population under study.” In February, Discovery CEO Adrian Gore said his team believed that over half of South Africans might have had exposure to Covid-19. But it is important to keep in mind that there are new variants that some people infected in the first wave may now be susceptible to. What we do know, is that very little is certain.

In the meantime, Sahpra has approved the section 21 (for human use) application for the Pfizer-BioNTech vaccine. DM/MC