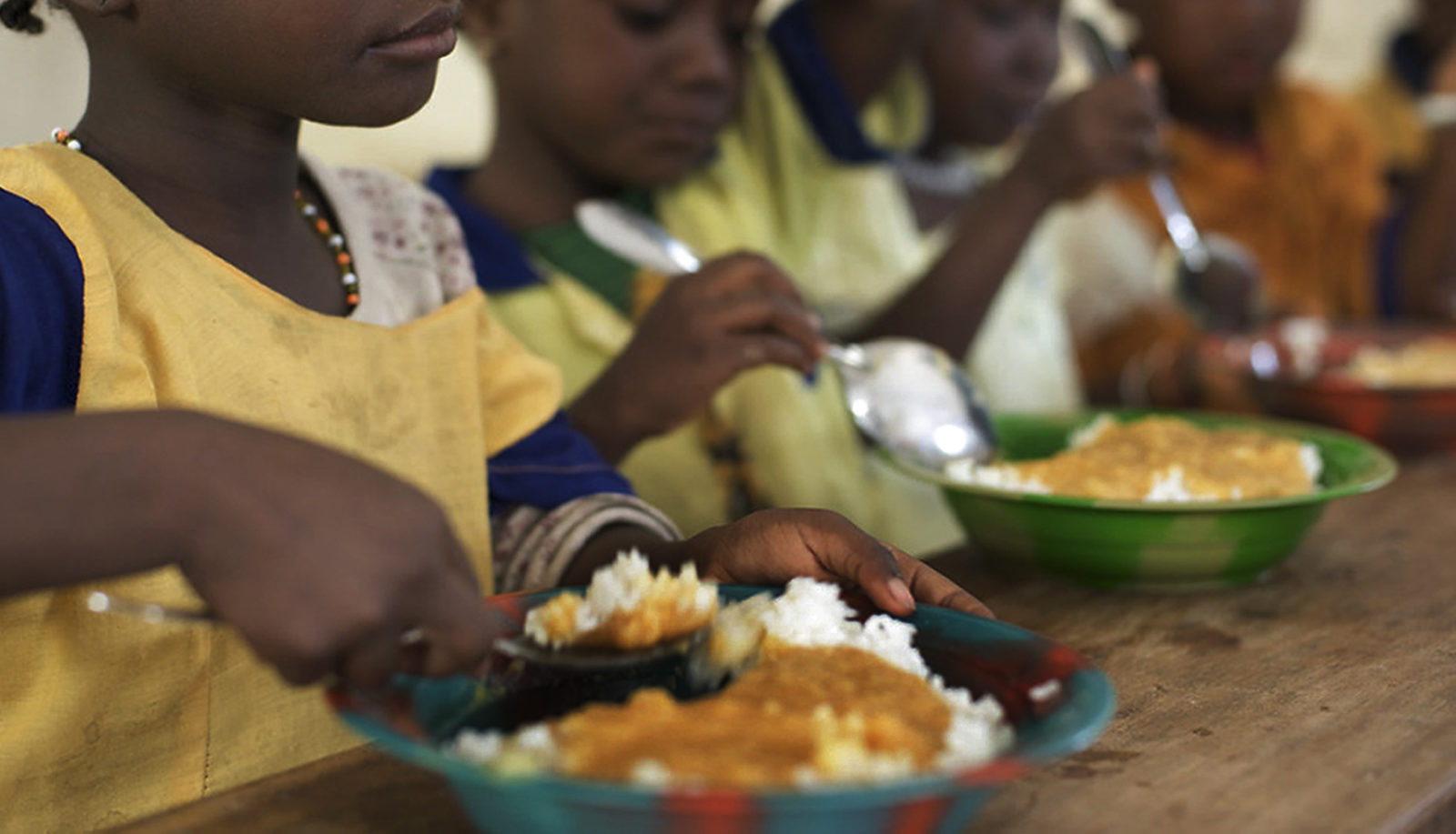 With millions of breadwinners losing their livelihoods due to Covid-19, the school feeding programme cannot afford disruptions as it is the only thing preventing millions of already vulnerable poor children (and their families) from starving. (Photo: Flickr / Julien Harneis/Wikipedia)

School feeding schemes have been implemented around the world to cater for pupils’ nutritional needs while promoting their capacity to study.

Designed to reduce hunger and improve nutrition, the school feeding scheme initiative is a globally recognised social protection tool that helps not only to keep children in the system, it has also reduced financial pressure on parents and taught children the importance of growing their own fresh produce.

Providing meals in schools was one of the world’s first public welfare programmes. Co-director of food safety and security at the University of Pretoria, Professor Lise Korsten, says school feeding schemes began in the 1900s in Britain as school dinners, necessitated by high levels of poverty and child hunger that resulted in many deaths.

“Then, a typical school meal in the UK included oatmeal porridge with milk and treacle, followed by bread with peanut butter spread and a cup of hot or cold milk drink,” said Korsten.

“In Africa, dried fruits and citrus were [normally provided] as the scheme was dependent on agriculture as an essential pillar to facilitate sustainable food production in schools and consumption of fruit and vegetables for a healthy diet, but now the school feeding scheme has evolved to accommodate hot meals.”

Since the advent of democracy in South Africa in 1994, the national school nutrition programme has fed millions of primary and secondary pupils from disadvantaged socio-economic backgrounds, enabling them to concentrate on their education and thrive.

The programme is a government-coordinated initiative that provides nutritious meals to no-fee schools on school days to alleviate child hunger, ensure the wellbeing of all pupils, and relieve the financial burden on their households.

The meals have become essential to pupils and their families, explained Hopolang Selebalo, co-head of research at Equal Education. “The government should invest more as the number of children needing food is growing rapidly and any disruption of the programme is catastrophic for the beneficiaries.”

Funded by the national school nutrition programme grant framework, the scheme is directed by the Department of Basic Education and the Treasury. However, not all school feeding programmes are budgeted for by the department — some complement it by providing food relief to vulnerable groups. Examples of these include the Peninsula School Feeding Association in the Western Cape and African Children’s Feeding Scheme in Gauteng.

The department directs schools to set up school nutrition committees that comprise two nutrition advisers (appointed for the district), volunteer food handlers, members of the school governing body and a coordinator. The committee is then responsible for ensuring that the daily menu guidelines are followed, that the cooking environment is healthy and safe, and that pupils receive their meals on time. They also need to keep a register of how many pupils are fed daily.

There’s a different menu for each day of the week, with mealie-meal porridge or breakfast cereal provided in wealthier provinces while less-resourced provinces serve just one meal a day.

A typical meal in all the provinces includes a protein (either soya mince, pilchards, eggs, milk, beans, lentils or peanut butter) and a starch (pap, bread, rice, samp or pasta), and vegetables and fresh fruits. Schools are required to plant a fruit and vegetable garden, to supplement the menu.

Professor Hettie Schönfeldt, a member of the South African Research Chairs Initiative and Chair in Nutrition and Food Security at the University of Pretoria, says the school meal must provide children with their daily protein. “The programme was developed to support a third of the children’s nutritional needs and that’s what it exactly does.”

The meals provided through the school feeding schemes significantly supplement the beneficiaries’ daily energy and nutrient requirements. The government allocates at least two nutritionists per province to design a school menu in accordance with the South African Food-Based Dietary Guidelines.

These menus are featured in the department’s Mnandi for Sure recipe book used by volunteer food handlers (either parent and/or unemployed members of the community who are paid a monthly stipend). The book offers guidelines for keeping a clean kitchen and recommends no fewer than one food handler for every 200 pupils.

Over the years, school meals have grown to be a lifeline for more than nine million children in South Africa, as they go a long way in strengthening school attendance, participation, nutrition education and promoting sustainable food initiatives in schools.

Leftovers and Friday takeaways are made available to pupils who have been identified as needy.

When schools were closed on 18 March 2020 amid South Africa’s hard Covid-19 lockdown, the department suddenly halted the National School Nutrition Programme (NSNP). This had a devastating impact on food security for vulnerable learners and families reliant on the feeding scheme meal provisions as this meant they were going hungry for the first time since 1994 and adding to the millions of other hungry mouths in South Africa.

When President Cyril Ramaphosa declared a national lockdown in March last year, all schools in the country also had to close.

It was the public schools that bore the brunt of this lockdown as this meant that the NSNP was also shut.

This left nine million learners without the daily meal they relied on. Most of these learners come from families where parents are unemployed or informally employed and they, therefore, have irregular sources of income which was further exacerbated by loss of income during the Covid-19 lockdown, which meant that learners often went hungry.

Civil society organisation Equal Education (EE) intervened to ensure that the Department of Basic Education continued to fulfil its constitutional obligation of ensuring that learners continued to receive food during the lockdown.

While the minister of basic education initially agreed to continue the NSNP, she later backtracked, which resulted in EE and two school governing bodies from Limpopo taking the matter to court. They were represented by public interest law organisations Equal Education Law Centre and SECTION27.

They won the case on 17 July with judgment saying that Basic Education Minister Angie Motshekga and eight provincial education MECs were in breach of their constitutional duties for failing to roll out the NSNP to all qualifying learners — regardless of whether these learners had returned to class or were still at home — and ordered that the NSNP be reinstated immediately.

Since then, Equal Education and others have been monitoring the reinstatement and implementation of the NSNP, which has occurred at a slow pace with many impediments.

Over the years, school meals have grown to be a lifeline for more than nine million children in South Africa, as they go a long way in strengthening school attendance, participation, nutrition education and promoting sustainable food initiatives in schools.

Bronagh Hammond, director of communication at the Western Cape Department of Education (WCED), said the province expanded the scheme in 2013 to include breakfast. “After monitoring the WCED has found that the breakfast meal has contributed to higher concentration levels in the first few periods, increased attendance, as well as decreased the number of late-coming at schools.”

Gauteng, the most populous province, has seen a surge in dependency on school meals, said Steve Mabona, spokesperson for the Gauteng Department of Education. He said in 2021, his department will be serving 1,561,018 pupils in 1,642 schools. “The department has also added canned chicken liver to the menu to ensure compliance with the conditional grant framework,’’ said Mabona.

To encourage compliance, the department introduced annual district awards in 2010, in collaboration with the Tiger Brands Foundation. The awards recognise the best district that meets the minimum requirements of the programme in terms of excellence, innovation and the number of schools that implemented it within the district. In return, Tiger Brands donates equipment and in-school breakfast programmes to the winners.

School feeding schemes are more important than ever. With millions of breadwinners losing their livelihoods due to Covid-19, the programme cannot afford disruptions as it is the only thing preventing millions of already vulnerable poor children (and their families) from starving. It needs to be maintained, even when schools are closed. DM/MC