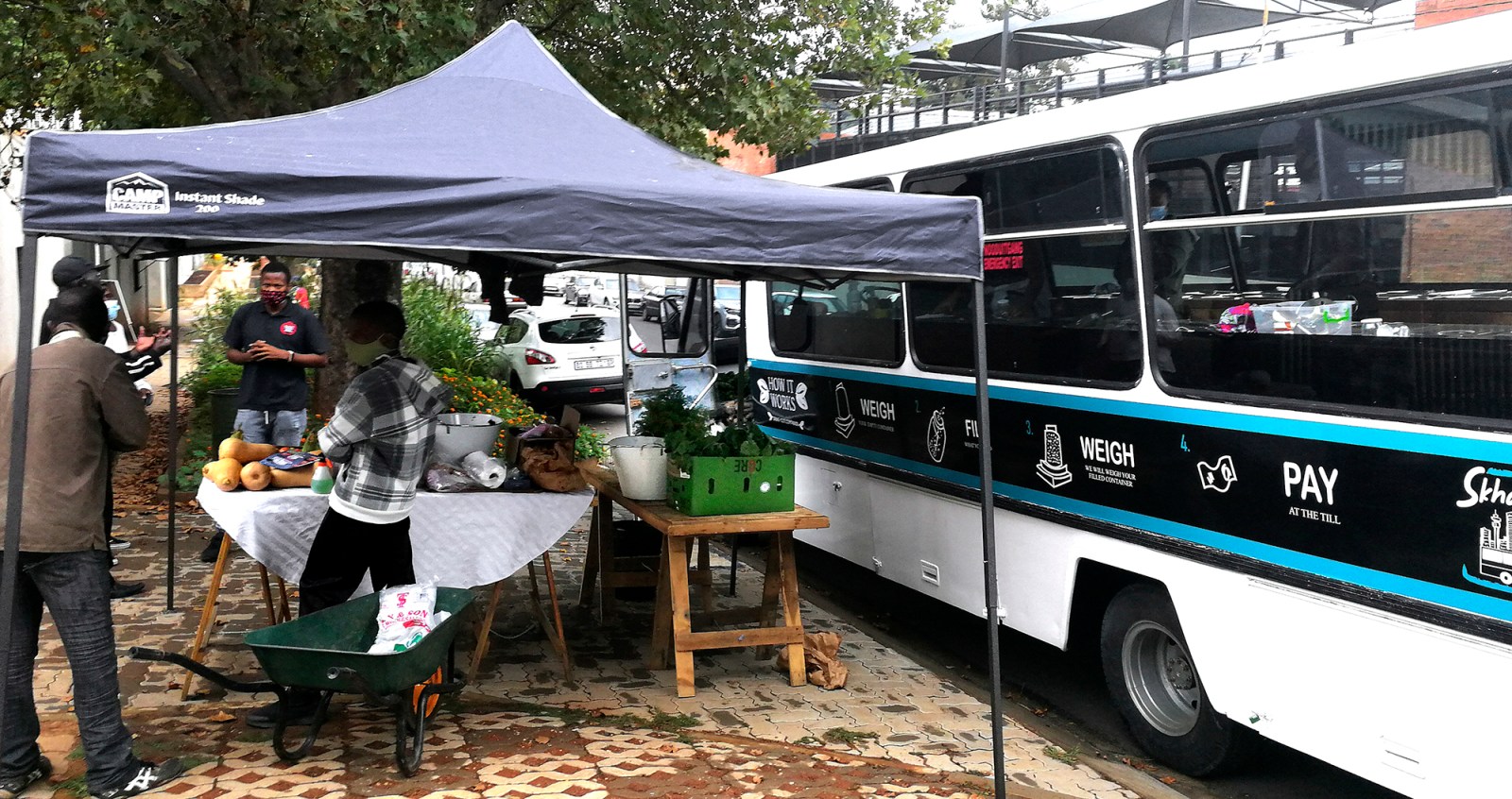 Adversity can be the mother of invention. In the face of Covid-19 in communities across South Africa individuals and organisations have stepped up to try to overcome artificial social divides and start to innovate to create communities based on care, solidarity and human rights.

One of these has been the “network of possibilities” being catalysed by the Makers Valley Partnership in the suburbs of Lorentzville, Troyeville and Bertrams in the inner city of Johannesburg.

It was here, several weeks ago in a car park at Victoria Yards, that a new social enterprise that aims to make good food directly accessible and affordable to the poor was launched.

Since the middle of last year a group of young volunteers, led by social entrepreneur Ilka Stein, has been working to rehabilitate an old bus, reinventing it as South Africa’s first Skhaftin bus. If, like me, you are not well versed enough in tsotsitaal to know the meaning of skafting/skhaftin/skaftin, the Urban Dictionary will enlighten you. It is:

Somewhere, deep in memory, it reminded me of how Chitty Chitty Bang Bang had been constructed out of the wreck of an old racing car – only the Skhaftin bus doesn’t fly!

The plan for the Skhaftin bus is that three days a week, to begin with, it will drive to locations in the area and open its door to shoppers. Apart from Stein, who is a consultant, it now employs three young people from the community who initially worked on the project as volunteers.

To that end, the bus’s insides have been delicately removed and replaced on either side with a shelf with metal containers, into which dry foods are placed. On sale are foods including samp, lentils, split peas, black beans, spices, oats and semolina.

Shoppers enter from the front, skhaftins in hand, and proceed down the bus, spooning what they want into their skhaftins before they are weighed and paid for. They then exit out the rear.

According to Stein the bus was an idea born as she witnessed the hunger in the community during the first Covid-19 lockdown between March and May last year. She was one of the stalwarts manning the soup kitchens set up by the Makers Valley Partnership. As they responded to the emergency requirements for food, many of the volunteers began to grapple with the need for better, sustainable food systems.

The bus has several advantages over going to your local Checkers or Pick n Pay. It is plastic-free – perfect in a world where people are increasingly worried about plastic pollution and single-use plastics. It also saves people the costs of packaging and the markup taken by big retailers, which have made substantial profits during the Covid-19 pandemic.

Another advantage is that it allows people to have greater choice over the quantities they buy and thus reduces food waste.

One of the community shareholders (for want of a better word) in the Skhaftin bus is Mme Refiloe Molefe, the inspirational matriarch of the Bertrams Inner City Farm, built on the old bowling green opposite the Johannesburg Stadium. Mme Refiloe supplements the dry foods with the organic fresh vegetable produce of her farm, as well as traditional bread, vegetable juices and sauces.

As I talk to her in the shadow of the bus, Mme Refiloe unfolds her own wonderful story, which I will tell on another day. This old-age-nurse-cum-farmer sees the bus as a new opportunity to improve community access to and understanding of food.

Her farm is maintained by young people who are volunteers from the University of Johannesburg. “These young people get therapy from working with the soil… We want people to heal themselves from the food they eat,” she says.

As I walk away with my purchases, Stein says proudly that the bus will “allow community members to access good-quality food” literally on their doorsteps. People are excited. Children are asking for a sweets corner. It is a small step, but in an important way “it has provoked a conversation about food”, she says. DM168