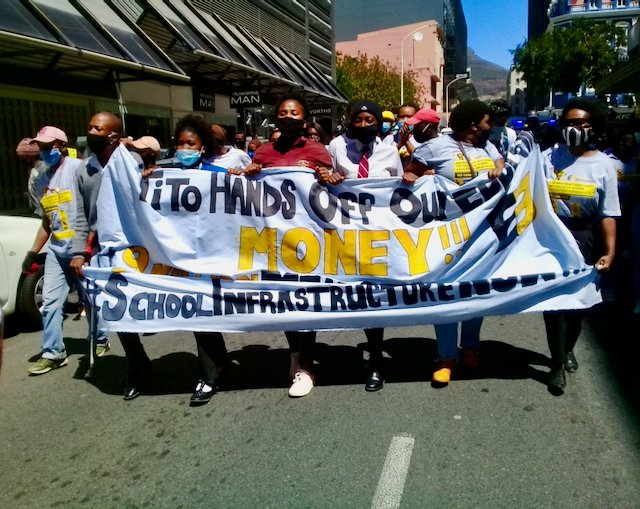 On Wednesday members of Equal Education picketed outside Parliament ahead of the budget speech to demand that Minister of Finance Tito Mboweni allocate more funds to basic education. (Photo: Marecia Damons)

SECTION27 and Equal Education (EE) say that although more funds have been allocated to education in the latest budget, funding for basic education in real terms will diminish.

The National Budget tabled by Finance Minister Tito Mboweni shows an increase in the budget for the Department of Basic Education (DBE) over the next three years. The department’s total expenditure is set to increase at an average annual rate of 7.2% from R23.4-billion in 2020/21 to R28.8-billion in 2023/24.

Despite this increase, analysis of estimates of national expenditure for basic education shows that funding will decrease per learner, in real terms, over the next three years because of inflation and increased enrolments in schools, SECTION27 said in a statement.

Recently published research also shows that government spending per learner on basic education decreased by an average of 2.3% between 2009 and 2018.

Since 2016/17, funding for education as a percentage of the total budget has decreased from almost 19% to around 15%, EE said in a statement.

The DBE’s budget will be increased by almost R4-billion from 2020, reversing previous cuts made, but the budget decreases again in the following two years if inflation is taken into account.

“[The] budget represents a continuation of concerning trends of underspending on basic education,” EE adds.

About R8-billion has been allocated to the National School Nutrition Programme (NSNP) for 2021/22, and it is set to increase at 5% annually over the next three years.

There will also be less money to pay teachers and other education staff over the next three years. The 2021 budget shows cuts of R254.8-million to the Funza Lushaka Bursary for new teachers.

In total, cabinet has approved R1.6-billion worth of reductions to previously planned expenditure and conditional grants in the education sector over the next three years.

In the latest budget, R36.7-billion is allocated towards the Education Infrastructure Grant (EIG) over the medium term, with the sector receiving R11.6-billion for this financial year.

“The recovery of these funds, however, may not be enough to catch-up on last year’s suspended and cancelled crucial infrastructure projects at schools,” SECTION27 adds.

EE shared this sentiment. “The little bit of relief announced in the budget speech is thanks to the determined advocacy of school communities. But the victory is bittersweet because the relief is small in comparison to the cuts introduced last year.”

Since October 2020, learner members of EE, post-school youth members and parents have protested to demand that government prioritise education, that the budget cuts be reversed, and that education be declared a frontline department in the fight against Covid-19.

Members of the organisation also picketed outside Parliament on Wednesday ahead of the budget to demand that National Treasury allocate more funding to basic education in line with inflation.

“It is learners, teachers and parents/guardians who will feel the consequences of these decisions in schools, when already stretched classrooms fill up, there are too few teachers, and learners go without meals because of underfunding,” EE said.

The organisation said that it will work towards developing an alternative budget that will be informed by unemployed individuals, the working class, and people from rural communities. DM