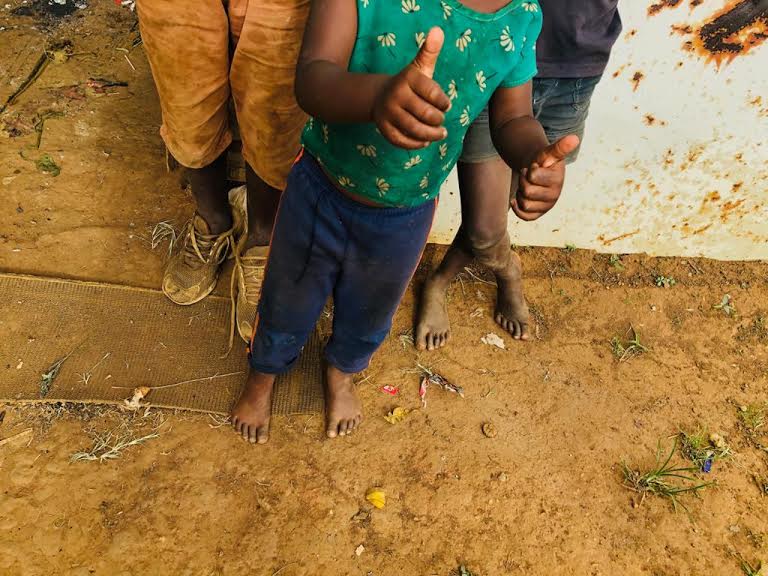 Four-year-old Simone and her two brothers try to run errands for their neighbours in the informal settlement in Tsakane, to earn small change to buy food. (Photo: Kimberly Mutandiro)

'I have to help my mother so she can buy food,' says nine-year-old, who often sleeps on an empty stomach.

There are four children in the family originally from Mozambique. Since the Covid-19 pandemic, there has been very little for them to eat. Their mother is a seasonal farmworker and their father a builder, and jobs have been scarce.

To help keep their hunger at bay the children run to and from the shops for neighbours in Tsakane’s Extension 10 informal settlement to get small change for a snack.

“Sometimes neighbours give us something to eat, or R1 or R2 when we go to the shops for them. We buy maskopasi (a maize snack) or something with a meat flavour,” says Johnnie. He often takes Simone and their seven-year-old brother with him to the shops so they can share a snack on their way back when they get some small change. Sometimes the younger children go on errands of their own.

There are times when there is nobody to give them small change; then they go to bed on an empty stomach.

Simone’s is one of many immigrant families who are struggling to survive in Gauteng since the pandemic. Many have lost their jobs and those who rely on odd jobs to survive say things have become even harder. The little money they make goes towards paying rent. With no documentation, they cannot access unemployment relief or child support grants.

Save the Children South Africa project manager Nyika Machenjedze says more than 200,000 families have asked for food aid since the beginning of the pandemic. “Hundreds of children and their families have been repatriated to countries such as Democratic Republic of Congo, Malawi and Zimbabwe,” said Machenjedze.

“When my child was hit by a car I was heartbroken. It got me thinking of how life has become so hard for us,” says Faith, Simone’s mother. She last worked last year, for four months at a sunflower farm in Driemanskap. She was paid 50c for every kilogramme of sunflower picked and made about R50 to R80 a day. With another harvest season soon to begin, she is hoping to be called for work. Her builder husband has not been hired for a long time. When they do get money, they pay their rent which is now in arrears.

“We can only afford one meal a day. As we speak l do not know what the children will eat for supper,” says Faith. Sometimes well-wishers give them food, but now the food has run out.

Not very far from Faith and her family lives another family from Mozambique, single mother Sarah and her five children. Sarah used to survive on picking up and moulding coal dust and selling it to neighbours for fuel. But of late her neighbours are not buying because they have no money.

“Before Covid, we would go to farms in Nigel to pick up maize cobs to grind into mealie meal for food. With corona we are no longer being given access to pick the cobs,” says Sarah.

“Sometimes my children cry from hunger, but I just don’t have anything to give them,” she says.

In Extension Six, nine-year-old Tommy is making his rounds with a small dish on his head. In it are small packets of vegetables worth R5 each. He misses the days when he could play with his friends; now he has to sell the goods to help his mother put food on the table. This has been his life for the past six months.

“Other kids my age laugh at me because l am selling vegetables. But l do not care because l have to help my mother so she can buy food,” says Tommy.

Of late competition has stiffened with many other immigrant children also selling vegetables. Sometimes Tommy goes home without making a sale.

“When l go for days without selling, my mother ends up cooking up the stock of vegetables,” he says.

“The people who used to call me to do washing or cleaning for them have not called me for a long time,” says Nina, Tommy’s mother. “We have forgotten what meat tastes like.”

“Life is hard for us immigrants because even for food relief one must register with SA ID numbers which we do not have,” she says.

Ten-year-old Domenic says he was recently robbed of R45 on his way home from selling vegetables. It was not the first time and often he is bullied. His family has six children. “Life is difficult for us now as my mother lost her job. We hardly ever have enough to eat.”

Along Johannesburg’s busy streets more immigrants, mostly from Zimbabwe, are seen with children asking for help from passing vehicles. Often small children walk over to passing cars with cups in their hands in the hope of getting money for food.

GroundUp spoke to two orphaned sisters from Zimbabwe, 20-year-old Rosemary and her five-year-old sister, Mary. With them was Rosemary’s two-year-old daughter. They say hunger forced them onto the streets. Rosemary lost her job in a shop as a result of the pandemic. They share a room with four other families in an abandoned Doornfontein building paying R250 rent per family. Of late there has been no money to pay rent.

Mary takes her turn walking over to passing vehicles. Some drivers give her small change; others do not even look in her direction.

“My hope was to work and raise money to send my sister to school. But with no food to eat, those dreams seem impossible,” says Rosemary.

They have lost touch with their grandmother in rural Chivhu.

Nearby with her four-year-old daughter is Patricia, from Kwekwe. In the hope of finding work, she came to South Africa in February last year. But before she could find a job the Covid-19 lockdown was announced. She sits on the side of the road while her child walks up to vehicles. It is 4pm and no-one has given them anything. They have had nothing to eat.

“If l get small money l buy something for my child to eat. lt doesn’t matter if l do not eat as long as my child gets something,” says Patricia. They sleep in empty buildings around Johannesburg.

Patricia would go back to Zimbabwe if she could raise the money. “If l cannot even afford to buy food for my child to eat here in Johannesburg, the best option is to go back home to Zimbabwe,” she says. DM

Names of the people struggling to access food in this story have been changed.