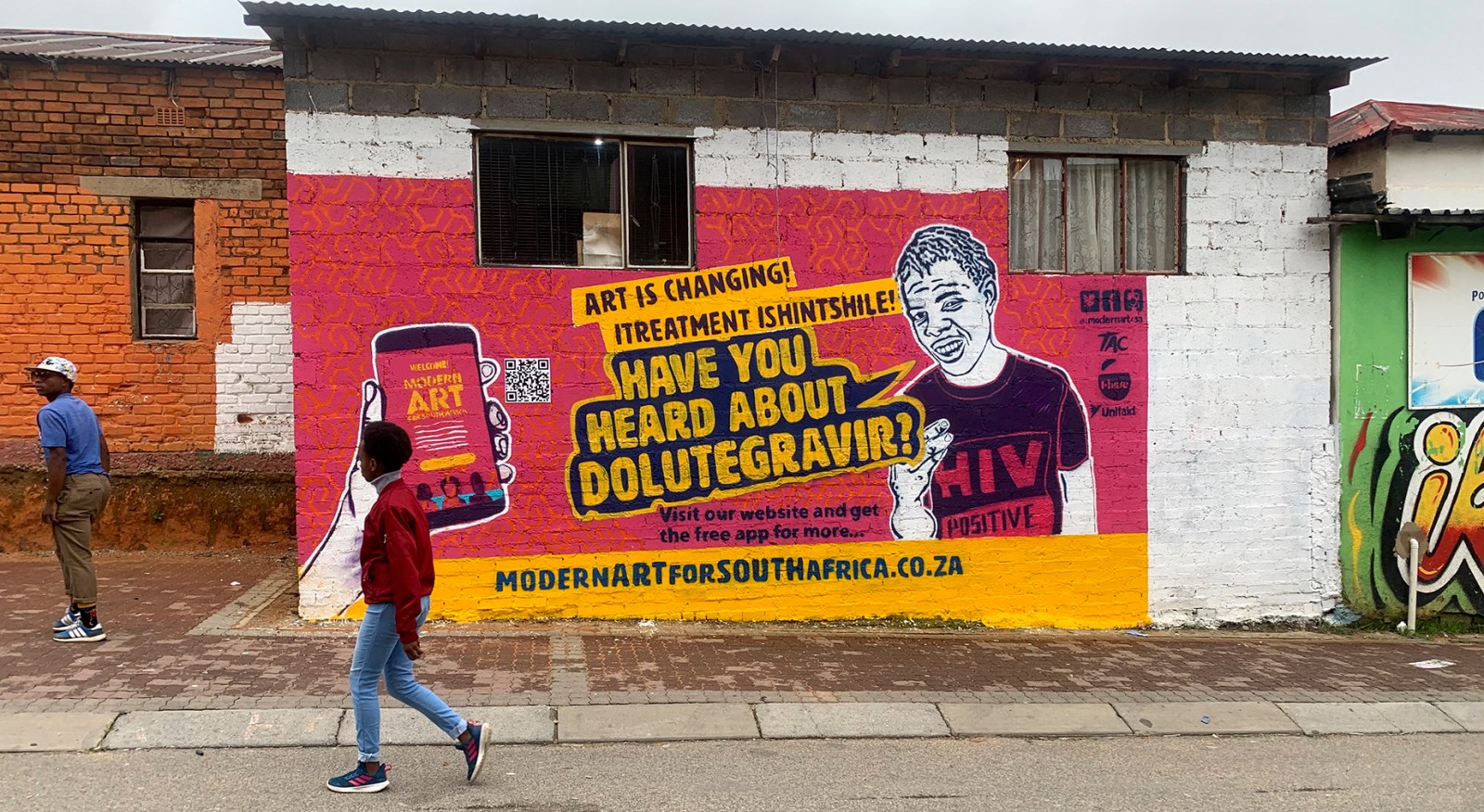 South Africa’s antiretroviral therapy regimen has been upgraded to include the new drug dolutegravir, which has milder side effects for users. Now, SA’s Treatment Action Campaign has partnered with i-Base, a British HIV treatment activist charity, to create awareness about the new drug in Soweto.

Over a period of fewer than two weeks, 20 bright pink murals began appearing around Soweto and Alexandra townships outside Johannesburg. The murals were positioned in high-visibility locations such as bus stops, community centres, health facilities, schools, taverns and free Wi-Fi hotspots.

The murals were designed by local communication and branding outfit, The Earth is Round. Head designer Karien van der Westhuizen explained that the funky designs were created with a view to modernising the way information about HIV is communicated.

“i-Base asked us to come up with a humanistic and approachable, yet modern look and feel for the Modern ART [antiretroviral therapy] in South Africa project — something alive and opposite to the dry and sometimes depressing designs we see for materials about HIV,” said Van der Westhuizen.

“We settled on bright colours and cartoon-like little people, combined with a rough, photocopy-like treatment of pictures of the trainers. This tied in nicely with the activism legacy of Treatment Action Campaign, a central partner in the project.

“Pink and yellow became the main colours on the app and website — we hope that it brings a sense of aliveness and optimism, because that is what ART is all about.”

In keeping with the theme of all things modern, the murals also feature a QR code which allows people to scan them and download the Modern ART app, which contains the latest information about antiretroviral therapy.

People also have the option of visiting the website or following the Modern ART social media platforms for instant updates — and the app reminds the user when he or she needs to get more medication.

While South Africa remains under adjusted Level 3 lockdown, the Modern ART project plays a vital role in bringing HIV-related information to the people. There are those who may be reluctant to leave their homes to visit a clinic or hospital and downloading the Modern ART app gives them immediate access to accurate information on their device.

The colourful murals seemed to have the desired effect, with people gathering to take a look. One man commented that the murals were exactly what his community needed.

“You’ve brought this campaign to the right place… all we hear about is Covid-19 and so many people have forgotten about HIV,” he said.

Modern ART collaborated on the murals with local artist Senzo Nhlapho of Senzart911. He said the interaction with onlookers made them realise what an important project this was.

“So many people did not know about the new HIV drug, dolutegravir. When we started creating the murals, people began engaging with us and got to know about the treatment and what it means for people living with HIV.

“The team at Senzart911 are proud to be the first to introduce the drug, using art as a form of communication within townships,” said Nhlapho.

Modern ART will continue spreading these dynamic murals throughout South Africa for the rest of the year. DM/MC