From ‘shithole countries’ to ‘reciprocal respect’: Biden’s rise to power and Africa’s expectations 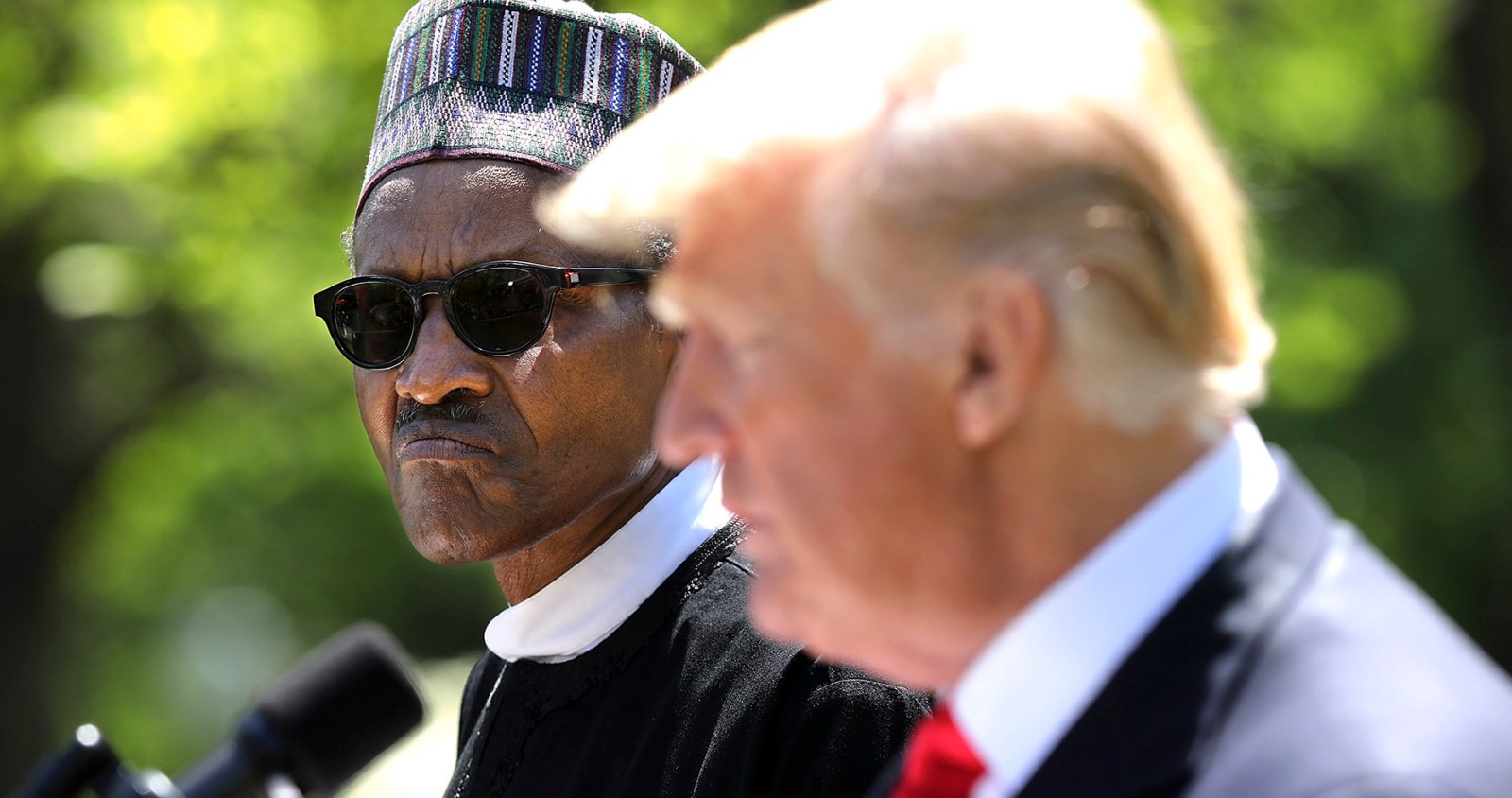 Nigerian President Muhammadu Buhari listens to US President Donald Trump during their a joint press conference at the White House in April 2018. (Photo by Chip Somodevilla/Getty Images)

The election of the Biden-Harris administration comes as a huge relief to many in Africa. There is anticipation of better relations, deeper engagement and predictable civil diplomacy.

Muhammadu Buhari of Nigeria was the first president from Sub-Saharan Africa to visit Donald Trump after his election as US president. After the meeting Trump advised his aides that he “never wants to meet someone as lifeless” as Buhari again. On immigration by Africans to the US, Trump asked why it would accept more immigrants from Haiti and “shithole countries” in Africa instead of accepting immigrants from Norway. On Africa’s health system, he once told African leaders that “Nambia’s health system is increasingly self-sufficient”.

In a sign of the lack of concern for Africa by his administration, Trump never set his foot on African soil during his term as president. It may sound funny, but this summarises the arrogance and condescending and often haphazard nature of US foreign policy on Africa during the Trump administration.

Thus the election of the Biden-Harris administration comes as a huge relief to many in Africa. There is anticipation of better relations, deeper engagement and predictable civil diplomacy.

Such is the anticipation for a change in policy that the “lifeless” Buhari tweeted a warm welcome: “Congratulations to US President-Elect Joe Biden on his election at a time of uncertainty and fear in world affairs. His election is a reminder that democracy is the best form of government because it offers the people the opportunity to change their government by peaceful means.”

Concerned about the impact of growing nationalism on undermining multilateral frameworks, Buhari immediately posted another tweet raising the expectation that Biden needed “to deploy his vast experience in tackling the negative consequences of nationalist politics on world affairs – which have created divisions and uncertainties – and to introduce greater engagement with Africa on the basis of reciprocal respect and shared interests”.

Meanwhile, Zimbabwean President Emmerson Mnangagwa’s congratulatory message to Biden demanded an end to sanctions, arguing that the attack on the Capitol showed that the US has no moral right to punish another nation under the guise of upholding democracy.

Mnangagwa gained an unlikely ally when Marc Holtzman, chairperson of CBZ Holdings, Zimbabwe’s largest financial institution, warned that not removing sanctions will make Zimbabwe more susceptible to illiberal influences arguing that: “Missing the opportunity to re-engage with Zimbabwe would be a mistake at both the diplomatic and economic level. The country’s leaders are frustrated that there are no clear targets for it to meet to gain acceptance by the West. Lack of dialogue risks pushing Zimbabwe further into China and Russia’s sphere of influence.”

However, the vice-president of the opposition MDC Alliance and former finance minister, Tendai Biti, argued that before he can expect removal of foreign sanctions, Mnangagwa should implement key reforms and not protect the “archbishops of corruption and looting” that are akin to “domestic sanctions” holding the country back.

Of course, Mnangagwa and Buhari’s paeans to democracy are somewhat rich given the track records of the regimes they head. But that’s another story.

In southern Africa particularly, the expectation is that the US will return to multilateralism in global politics, and that the US involvement in the World Health Organisation (WHO) and COVAX will benefit Africa by insulating it from the negative impact of “vaccine nationalism”. The futility of vaccine nationalism will be evident when more complex strains of Covid-19 emerge and spread indiscriminately across the globe from unvaccinated geographical zones to vaccinated ones. As Obiora C Okafor, United Nations independent expert on human rights and international solidarity, said: “This pandemic will not end for anyone until it ends for everyone.” International vaccine solidarity should be much preferred over international vaccine competition.

The US promise of renewed leadership on climate change is also welcome for a continent that is already facing the ravages of climate change. Investment in climate-proofing Africa and in renewable energy could be a mutually beneficial enterprise.

In East and West Africa there is an expectation, particularly from civil society, of US leadership on democracy and human rights in the face of democratic decline, rising authoritarianism, unfair elections, weaponisation of the law, attacks on human rights defenders and closure of (online and offline) civic space.

To the African political elite in countries like Uganda and Tanzania, Trump was God-sent. They didn’t care less how he was affecting the US democratic project. What was important was that he stayed away from criticising them and left that to a handful of ambassadors who then found themselves isolated and exposed. In Zimbabwe, former minister of finance Patrick Chinamasa, a Zanu-PF hawk, even had the audacity to call the US ambassador there a “thug”.

In the Horn of Africa there are hopes that the US will engage more robustly in mediating conflicts, particularly in Ethiopia, and not abandon support for counterterrorism efforts in East Africa and other parts of Africa, including the emerging threats in Mozambique.

Trade will be important, particularly at a time when Africa is trying to operationalise a Continental Free Trade Area. The Trump administration did not support the African World Trade Organisation (WTO) candidate, Dr Ngozi Okonjo-Iweala. It was a very strong signal of goodwill towards Africa when, in one of his early decisions, Biden ended the deadlock that Trump had created over the appointment of Okonjo-Iweala. She has now ascended to that throne as the first woman and first African to lead the WTO.

The Renewal of African Growth and Opportunity Act (AGOA) is also desired.

In his congratulatory message, President Yoweri Museveni of Uganda said: “Previous American presidents have already positively used these linkages by putting in place the African Growth and Opportunity Act that has given 6,500 types of African goods, quota- and tax-free access to the USA. We salute this policy and hope that President Biden maintains it.”

We previously highlighted that Trump presented his foreign policy as a direct check on Chinese efforts to invest in Africa, in a manner akin to the scramble for Africa – such as the pledge of $60-billion in October 2018 in response to China’s pledge to support Africa with $60-billion in projects in September that year.

Finally, there is the matter of geopolitics and the new scramble for Africa’s resources.

In this regard the US has a challenge of working effectively and transparently with civil society. Expectations have been raised of firmer support on democracy and governance with the appointment of Samantha Power to head USAID and Linda Thomas as US ambassador to the United Nations. It is also significant that the USAID administrator has now been formally given a seat at the National Security Council. As J Brian Atwood argues: “USAID’s policy voice can be vital, especially in a world where the source of many transnational threats is underdevelopment.”

While Trump did not visit Africa, China and Russia have expanded their political and economic influence. The US needs to engage more robustly to prioritise trade and support in global economic issues and challenges, otherwise the ever more authoritarian government of Xi Jinping in China will offer a more attractive model of political and economic governance, using development aid, loans, vaccines and general debt diplomacy.

The US policy on Africa should not present as direct competition with China for economic and political influence. Instead, we hope it is democracy and the espousal of human rights values that should be giving direction to US relationships with African states if “engagement with Africa on the basis of reciprocal respect and shared interests” is to be achieved. DM/MC