Freediver Amber Fillary on a mind-bending mission to win 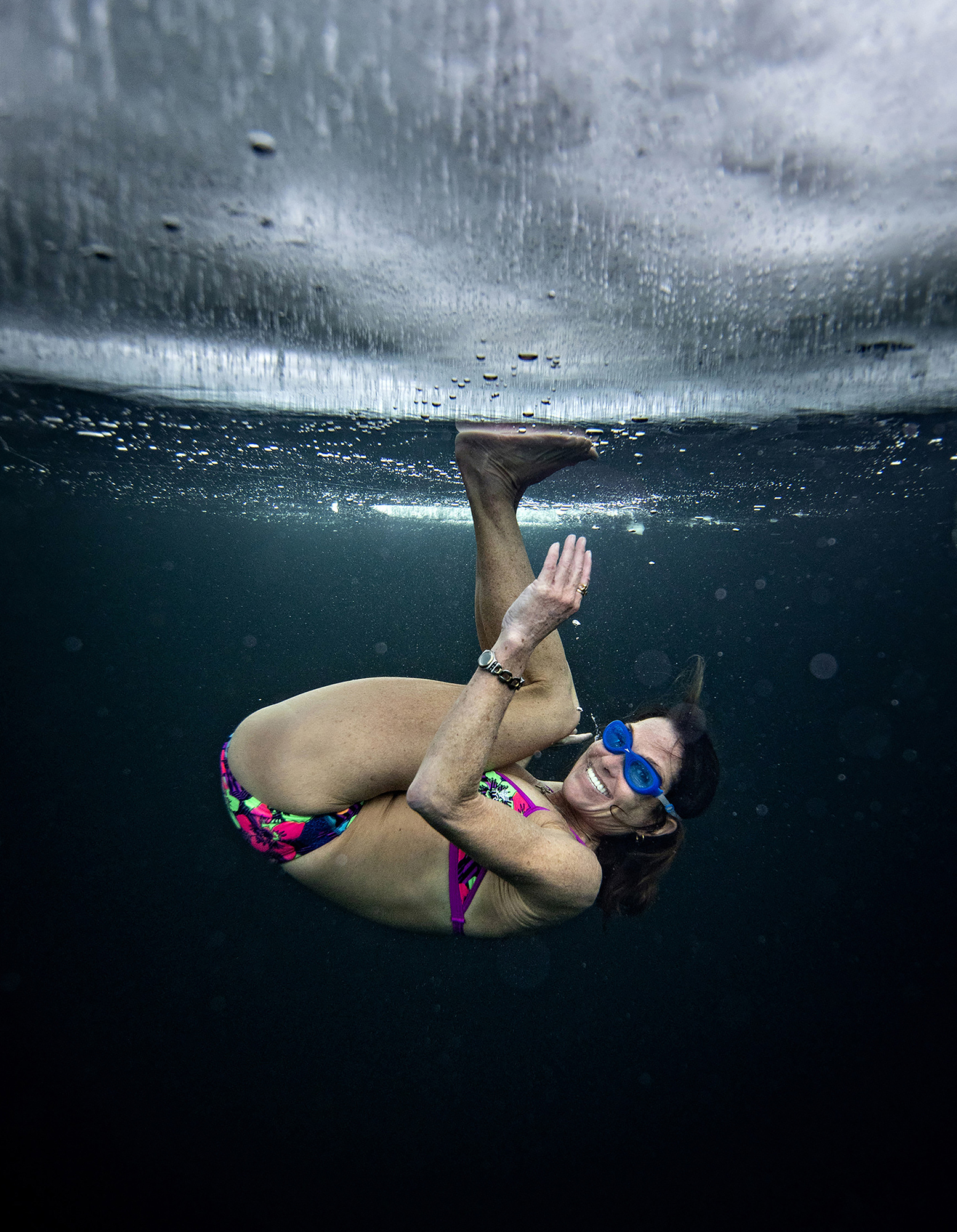 When Covid thwarted a chance at a new Guinness World Record this February, it was another massive mental hurdle for a South African freediver and recovering addict.

What drives somebody to dive, in freezing temperatures, under a thick layer of ice, wearing only goggles, a cap and swimsuit? For South African Amber Fillary, cold water is a leveller, something that focuses a panic-prone mind or distracts when bouts of negativity set in.

“I’m competitive, quite hard on myself. Freediving is quite obsessive. You have this one chance to beat the record,” says Fillary.

The diver turns 49 in April. Only 1.59m tall, she holds the Guinness World Records women’s title for the longest swim under ice with breath held (no fins, no diving suit). One giant breath took her a distance of 70m, under 34cm of ice, wearing only a bikini. It was 29 February 2020, in Oppsjø Lake near Oslo, Norway.

A year later, with similar seasonal conditions expected in Norway, Fillary has been training to break the men’s Guinness World Record. Her plan was to attempt the same dive under ice. The men’s record is held by Dane Stig Severinsen, who breath-hold dived 76.2m in 2013.

“There’s no guarantee of the required ice thickness after February, so I’ve now made the decision to delay my record-breaking attempt,” says Fillary. She’s frustrated after eight weeks of intense pool training in Cape Town with local swimming coach Allen Stubbs. But Germany has a travel ban on non-residents from South Africa, and Norway has introduced mandatory border testing and a 10-day quarantine.

“What makes it really hard is I have to wait a whole year until February 2022. It’s not ideal from a mental point of view. I suppose it’s the same for people who train for the Olympics. Maybe it’s your last year. It’s really challenging.”

Fillary has overcome personal battles with various addictions, as a recovering alcoholic and bulimic who also struggles with depression. “I spent most of my twenties in rehab. I met my husband in rehab and unfortunately he passed away,” she says.

“I’m on medication for depression and it’s better. But there are still things I battle with … I’m a recovering alcoholic so I can’t drink. I have eating disorders, so what I’ve managed to achieve is quite remarkable considering that I don’t eat well. And when I get depressed, I mean, I’m suicidal.”

In a cruel twist, Fillary feels “in a really good space” to break records now. Training gives her a purpose – and a mood lift. “The dive is about the record, obviously, but also about motivating others to improve their morale. About finding things to be positive about. My punchline was always: Don’t let depression and addiction get in the way of your dreams, because I’ve suffered from both. Things are so uncertain with the pandemic. People are struggling and losing their jobs. I’ll do this dive for awareness of mental health.”

After her successful 2020 dive in Norway, Fillary had to make the call to stay on in Germany or return to SA. “I decided to come home. And you know, the lockdown we went into was one of the hardest in the world. I was so depressed … I drank again.

“When I eventually phoned Sadag [the SA Depression and Anxiety Group], they said they had so many people phone in who had been stable who just weren’t stable again.”

Fillary’s winter base is Berlin, where she makes a living teaching swimming and doing motivational talks. But all German pools are currently closed. To prepare for ice dives, she swims in frozen lakes to acclimatise. Travelling, training and setting up dive logistics is costly. ­She left it too late to find 2021 sponsors but hopes she might secure some for the 2022 dive.

What is involved technically when training for the breath-hold? “I’m diving horizontally underneath the ice,” she explains. Johanna Nordblad was the first woman to dive under ice with breath held, reaching 50m in 2015. Fillary beat her record in 2020.

“When I do a dive, I have a team. I need a minimum of three safety divers: the first ice hole is at 20m, then holes are made every 10m after that. A safety diver gets into a hole and dives with me to the next hole. So if I get into trouble, I’m covered. I’m attached to a rope because it’s easy to lose direction under the ice.”

Other considerations are buoyancy and body temperature control.

“I’ve been training with Allen five to six times a week. He’s helping with technique, and also the breath-hold. It’s dangerous as I can pass out. That’s why I need a trainer.

“It’s a non-weighted dive where I have to exhale air as I go down. It’s about getting used to the buoyancy under the ice. If I don’t go down, I hit ice while I’m under there.”

Enduring cold temperatures is another factor. German lakes are 2°C or 3°C in winter, similar to frozen Norwegian lakes, where water is 1°C or 2°C under the ice.

“You need to remember you’re depriving the brain of oxygen for the period underwater,” says Stubbs of the pool sessions. “As a coach, I watch out for her: every time Amber surfaces, I speak to her to ensure she’s clear-headed. She’s gung ho, so I make sure that in those hourly sessions she’s not holding her breath for half of that. I watch her for clarity and a lack of sluggishness. Most freedivers get contractions in their stomach before they black out. Amber doesn’t seem to do that.”

Fillary has notched a few achievements in a pool already. In Port Elizabeth, at the Freediving nationals in 2016, she broke three free-dive pool records and won SA colours. She still holds the Africa (dynamic no fins) freediving record for 140m.

The first time she tried diving under ice was in Finland in 2017. She failed her first attempt at breaking the 50m women’s world record, near Helsinki, in February 2019. “It was a disaster, I got caught up in ropes under the ice, and the organiser didn’t have my best interests at heart. It just wasn’t right.”

Fillary’s freediving interest began eight years ago. “I was living in London. I had this mad lifeguarding job at a double-Olympics-sized outdoor pool. I lifeguarded for them in winter, so that’s when I started swimming in freezing temperatures.”

She’d run through Hyde Park, then swim with a group – in all temperatures – in the Serpentine lake. “There’s something nuts about people who do this sort of thing. It’s really cool because it’s levelling. It doesn’t matter who you are. One guy had done two race swims of the English Channel.”

Ice swimming is now a year-round sport, associated with positive effects on the immune system, hormones and moods. “It’s become quite fashionable to cold-water swim everywhere. It’s even happening at the Camps Bay tidal pool,” says Fillary. “People always say ice swimming is the easiest way to get high without taking drugs.”

“My aim now is to dive 90m at least and to break the men’s Guinness World Record in 2022. If I can go further, I will, but 90m is a good, long challenging dive. The cold makes the dive harder,” says Fillary.

Stubbs agrees with her projections and is confident Fillary would have broken a record this year. “We’re training to break the current record in small increments: maybe only by 10m. It’s her decision, ultimately, but we’re aiming for 100m in one breath as she’s done it a couple of times. At that distance, she isn’t struggling or even close to passing out,” says Stubbs.

“That’s why she’s a phenomenal freediver. She works very hard at it and I’ve never seen her surface and go: ‘I’m in trouble.’”

It’s the third time Stubbs has trained Fillary for winter dives. “She’s a damn good underwater swimmer. And she doesn’t go into panic mode when she’s running out of oxygen, like other people,” he says. “If she can get her mind right, she’ll break the record. And she’s capable of breaking a helluva lot more records over time.”

Fillary says any negativity would sap her energy. “The thing with freediving, it’s swimming to a degree, but from a mental aspect, you have to be so in the zone.”

Fillary may be wrestling with ways to endure pandemic delays, but her diving is in a good place. Says Stubbs: “Amber just gets in there and goes. If she says she’s going to do it, she will.” DM