A night in a hospital just after the alcohol ban was li... 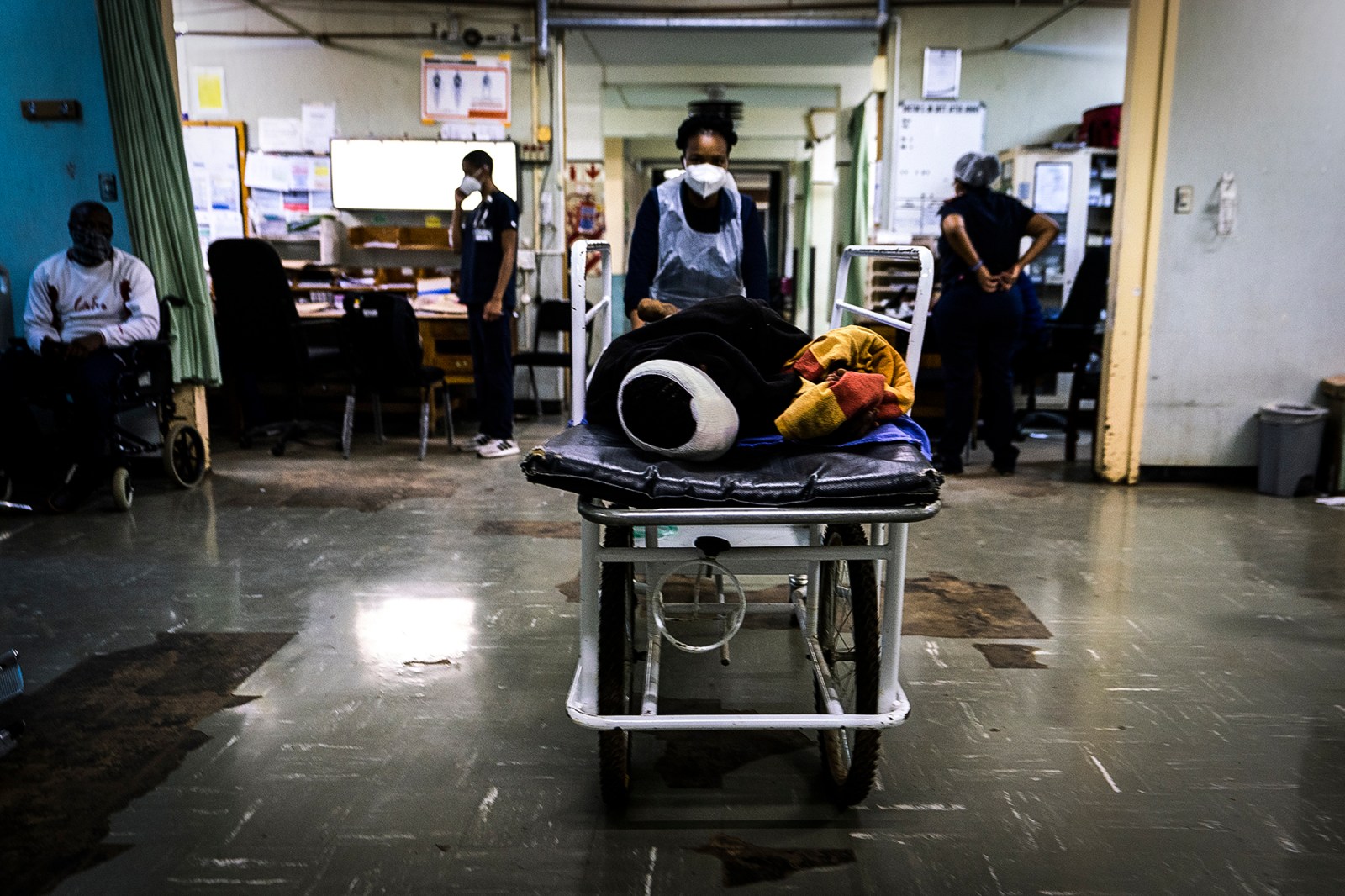 An assault victim with his head covered in a bandage is taken for treatment. Photo / Shiraaz Mohamed.

Shiraaz Mahomed spent some time in the trauma unit at Tshepong Hospital in North West, documenting what went on there once liquor was again available.

It’s the first Friday evening since President Cyril Ramaphosa relaxed the ban on the sale of alcohol and the staff at the Tshepong Hospital in North West are bracing themselves for a busy time.

Already, there are a few people waiting to be attended to.

A woman is heard screaming in pain as a doctor attends to her in a cubicle.  A porter wheels a man into the X-ray department. In the resuscitation room a man lies lifeless on a stretcher bed. He had jumped off a bridge earlier that day.

Another man lies waiting to be admitted to theatre for surgery. He was in a motorcycle accident earlier that morning. Nurse Dineo Kgosinyane says the two incidents were not alcohol-related.

Head of trauma Dr Agustin Tenenbaum, who has been working in the hospital’s trauma unit for the past 15 years, states matter-of-factly: “The issue of alcohol-related incidents was one of the major problems we have had. Around 25% to 30% of the patients that we see on weekends are trauma, most of them related to alcohol intake.

“But, with the restrictions on the intake of alcohol, we saw a drop in those cases and definitely had more time and resources to dedicate to the pandemic and to the treatment of the patients who would come in with other problems. Now that the alcohol ban is lifted we are bracing ourselves,” Tenenbaum says.

In the stitching room, a man is getting sutured. His girlfriend allegedly stabbed him in his thigh during a drunken spat. Despite being visibly under the influence of alcohol, he denies drinking.

“I don’t know why she stabbed me. She knows why. I was not drinking,” he said when asked what had happened.

He was given a prescription for pain medication and discharged a few minutes later. Happy, he said he was going home to sleep.

At around 10pm, a call from the provincial ambulance control room informed staff that a pedestrian had been in an accident in a township several kilometres from the hospital. Police believed he was a victim of a hit-and-run, which, officers on the scene say it was alcohol-related.

As the ambulance dropped off the patient, two other ambulances arrived. “When we heard of the lifting of the alcohol ban we knew we were going to get busy,” said a paramedic, who didn’t want to be named, as he climbed into his ambulance.

As the 11pm curfew, which is still in place under Level 3 lockdown, comes around, the trauma unit grows quiet. Doctors chat at their station. Porters move stretcher beds from inside the hospital to outside.

A prison warder sits outside smoking a cigarette while his partner keeps an eye on their prisoner inside the hospital.

“I don’t like it here. I prefer it at the prison. At the prison, these guys are locked up. Here one has to be very alert because they might try to escape. Sometimes they fake being sick just to come here to try and escape,” he says.

“But not this guy [their prisoner]. He took a lot of tablets. He wanted to kill himself.”

At about 1am Matron Nandi Mkhize does her rounds, checking on staff and patients. All is quiet except for a few assault cases. A man sits in a wheelchair in the triage area, covered with bandages. Ahead of him is another man, also a victim of an assault.

A police van pulls up outside the trauma unit to handle the paperwork of the man who jumped off a bridge earlier on Friday morning.

At 2am on Saturday, the SAPS forensic Pathology Unit arrives to remove the body.

Later, hospital spokesperson Nico Masiu said that between Friday evening and Saturday morning the hospital’s trauma unit saw a total of 83 patients, of which two were MVA (Motor Vehicle Accident), two were PVA (Passenger Vehicle Accident) and nine were assaults.

At least two of the PVA incidents were alcohol-related.

Only one of the assaults was not alcohol-related. DM168