Somalia misses a vital meeting with the ‘electorate’ 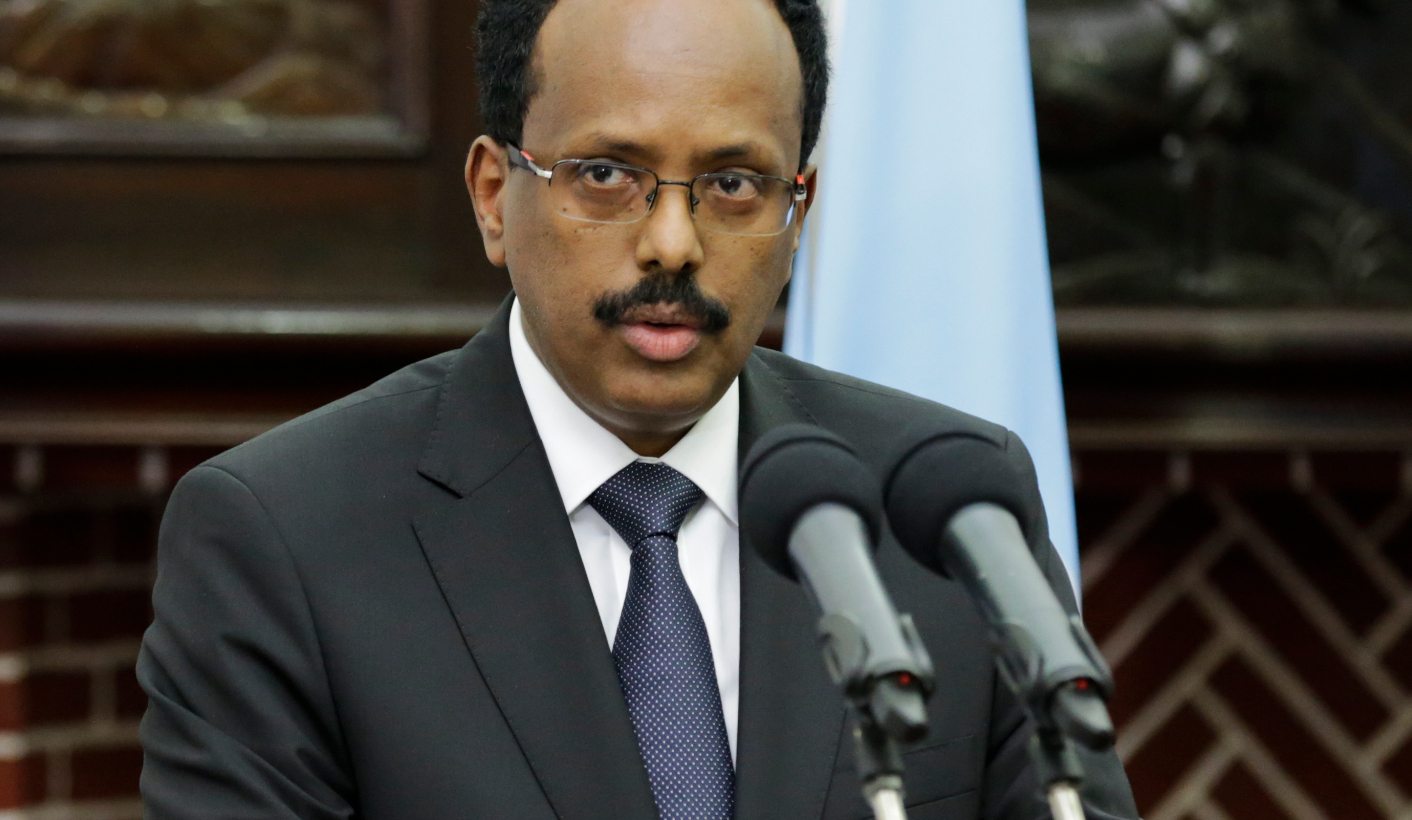 It has been proclaimed by Somalian political opposition that Somali President Mohamed Abdullahi 'Farmajo' Mohamed (pictured) is governing without a mandate. (Photo: Supplied by ISS)

Politicians have allowed ongoing quarrels over the centralisation of power to put a hold on democracy.

It wasn’t even going to be a real one-person, one-vote election. That had been the original plan but had proved too ambitious. So Somalia reverted to its previous practice – an indirect election where powerful clan elders would elect delegates who would elect legislators who would elect the national president.

But even that relatively modest ambition proved too much for the Somali politicians to implement, and so no election was held this week on the appointed date of 8 February. A country already battling to navigate stormy seas then entered even less charted waters. This was the first time elections had been delayed beyond the expiration of the government’s mandate – without an agreed plan on the way forward.

The national political opposition and that in the federal state of Jubaland proclaimed on Monday that President Mohamed Abdullahi Mohamed – alias Farmaajo – was now governing without a mandate, and so withdrew recognition of him.

But Farmaajo is invoking the legislation passed last year after the 17 September political agreement among all parties on the holding of elections. That ruling says that government institutions will remain in place until their successors have been formed. Without a constitutional court, the issue remains unresolved legally, though potentially explosive politically.

The United Nations (UN), African Union (AU) and many other external forces are piling on the pressure for the Somalis to set a new date. But, as senior Somalia analyst for the International Crisis Group, Omar Mahmood says, the levels of distrust among the politicians are now so high that it’s difficult to see them maintaining consensus to hold elections soon, even if there is a new agreement.

That distrust was evident on Wednesday when Farmaajo proposed a meeting with the opposition forces and the federal states on 15 February – in Garowe, capital of Puntland, the enemy’s den, so to speak. Puntland President Said Abdullahi Deni said that while he welcomed another meeting, the choice of venue was an “ambush.” The opposition presidential candidates also insist that the meeting be held in Mogadishu and that Farmaajo attends as just another candidate, not as head of state.

The role of outside countries – especially neighbours – has been immense and immensely controversial in the Somali conflict. Abdimalik Abdullahi, a Mogadishu and Nairobi based Somali political researcher and analyst, notes that “international partners are instrumental for Somalia’s recovery. They have invested in the state-building and peacebuilding efforts for the last two decades.

“Their contribution can be largely termed as a positive one but of course some of the countries including frontline and neighbouring countries and Gulf countries are an affront to the political stability of the country by allegedly bankrolling and grooming some of the Somali leaders who will eventually work as their proxies.”

Nevertheless, Mahmood believes a more robust, hands-on intervention by external players – led by the UN but including the AU and regional powers such as Ethiopia and Kenya – would have a better chance to put the process back on track.

Meanwhile, al-Shabaab, as ever, is circling the squabbling political antagonists, hyena-like, seeking to exploit the impasse. A deadly attack on Hotel Afrik in central Mogadishu on 31 January in which nine people died – including four al-Shabaab terrorists – appears to have been a warning shot against holding the election. The same goes for several attacks last year in Dhusamareb, capital of Galmudug State, while politicians were negotiating the 17 September agreement on the holding of elections.

So why were the polls not held? In essence, Mahmood says, it’s about who can better influence the elections, with the opposition dismissing the notion that Farmaajo’s government should be both the referee and a player. Specifically, the opposition claims that Farmaajo has stuffed the election organising committees, at national level as well as in some federal states, with his own supporters.

Another issue has been the electoral committee for Somaliland which will be represented in Somalia’s Parliament, even though it has unilaterally declared independence. The Mogadishu government has claimed the right to appoint Somaliland’s electoral committee. The opposition insisted that should be done by the highest-ranking selected leader originally from Somaliland – the Upper House of parliament speaker.

But the biggest sticking point was and remains whether Mogadishu or the Jubaland federal state government should run the elections in Gedo region, one of two voting points in the state. Jubaland President Ahmed Madobe last weekend accused Farmaajo rather extravagantly of “lacking a single factor of normalcy” – saying he had reneged on prior agreements on the Gedo elections.

As Mahmood says, Farmaajo and Madobe have been at daggers drawn throughout the past year over the control of Gedo, so the election is just part of that.

“The federal government is trying to hold that election the way things currently stand, where they have security forces on the ground; and where they’ve been able to replace some of the local administrators. And of course Jubaland is against that, saying, ‘This falls under our mandate, our state, we should be the ones in charge of that process.’”

So the standoff that is blocking the elections is in a sense a microcosm of the wider problem that is bedevilling Somali politics – the issue of centralisation of power versus real federalism and decentralisation. Farmaajo has tried throughout his term to control the federal states by insisting on presidents loyal to him. He has succeeded in the other three states, but not Puntland or Jubaland.

Mahmood says “there’s plenty of blame to go around” for the current impasse. But although Farmaajo has made some progress on certain issues during his presidency, his administration has also made domestic enemies.

“Political divisions are greater than they were four years ago, and that’s a byproduct of his vision to have more centralised governance from Mogadishu and to take a little bit of that away from the federal member states … trying to dominate your way through Somalia has proved too divisive.”

Abdullahi agrees that Farmajo’s attempts to centralise power largely contributed to the political clashes. “The president failed to foster political stability of the country, hence falling short of his campaign pledges and furthering national priorities. On the other hand, he has done some good work in terms of security sector reforms, debt relief and establishing a number of crucial government institutions and centres.” Abdullahi is optimistic that an agreement will be reached soon.

That is urgent as Somalia cannot afford to let political squabbles aggravate the country’s existing instability. One would think the Somali politicians would be much more united against a deadly common enemy – al-Shabaab. But it seems even their survival instincts have been subordinated to the desire for power and patronage. DM