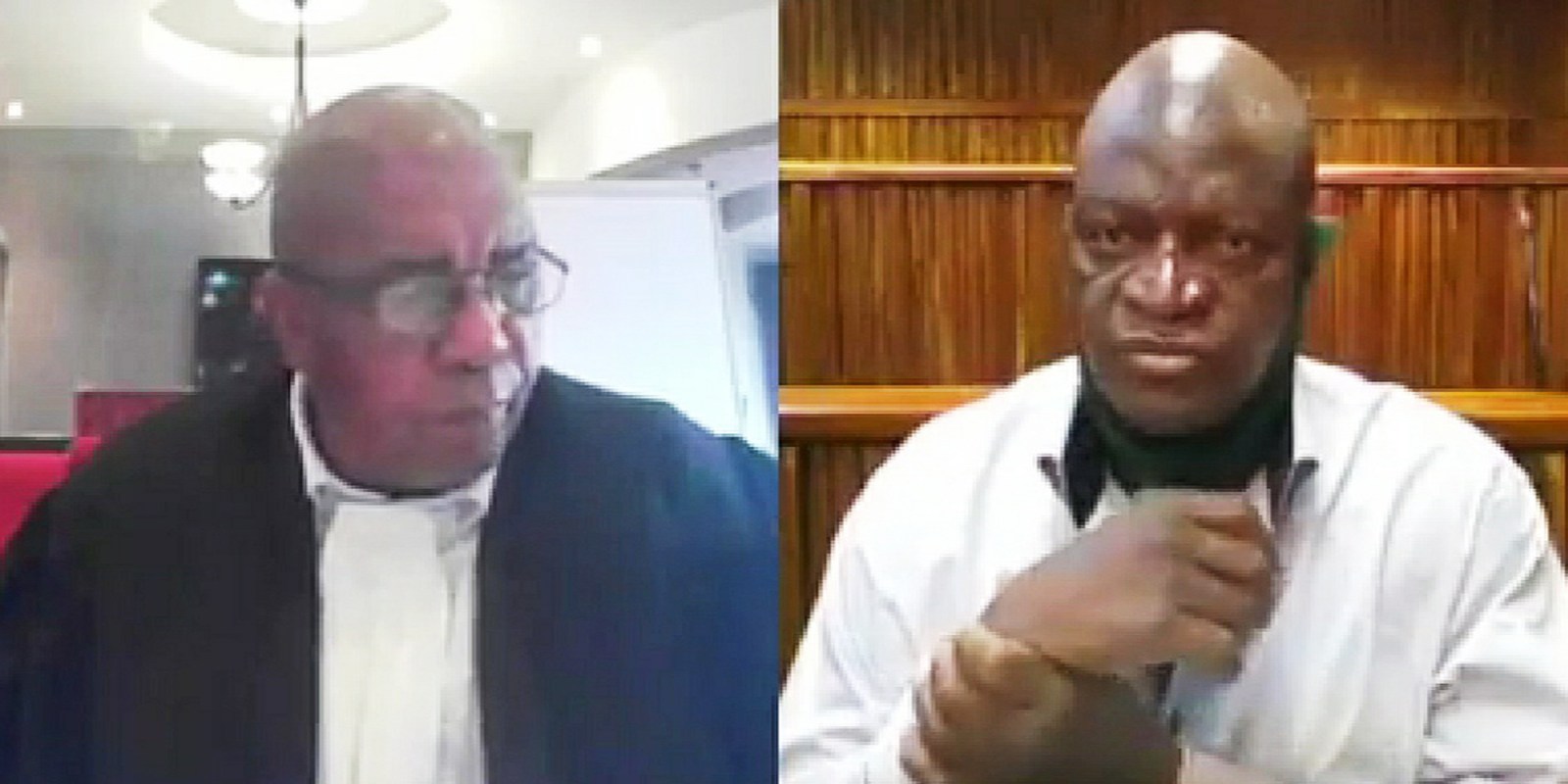 A screengrab of virtual proceedings of the reopened inquest into Dr Neil Aggett’s death. On the left is the NPA’s Advocate Jabulani Mlotshwa and on the right is Magezi Eddie Chauke, whom Aggett said was part of the team of policemen who assaulted him.

A former Security Branch policeman’s testimony kicks off week four of hearings in the reopened Aggett inquest with accounts so sanitised they raise more questions about the deep reach of John Vorster Square’s code of silence and culture of intimidation.

The man some political detainees called “The Child of Cronwright” took the stand at the start of week four of the hearings of the reopened inquest into the death in detention in 1982 of trade unionist Dr Neil Aggett.

In a different time it might have been a nickname Magezi Eddie Chauke would have cherished, but on the stand in 2021, the former detective constable in the police was downplaying any particular closeness to Major Arthur Cronwright. Cronwright was head of the Security Branch at John Vorster Square at the time Aggett was detained. Cronwright, now dead, along with Lieutenant Steve Whitehead, also dead, have been directly implicated in how Aggett came to be found hanged in his cell on 5 February 1982.

Chauke’s response to his nickname did not get a public airing because of a cut in the live feed minutes into Tuesday morning’s virtual court proceedings, apparently because of load shedding. Chauke’s testimony till that point had been marked by denials, ambiguity and falling back on not being able to remember.

Chauke was one of the three policemen (together with Whitehead and Sergeant James van Schalkwyk) whom Aggett had identified as the men present at an interrogation on 4 January 1982 during which he said he was stripped half-naked, forced to do strenuous exercises, to write confessions and statements and assaulted.

He had detailed how he was slapped in the face, punched in the temples, knee-kicked in the thigh and pushed so hard he fell against a table and injured his back. He was also cut by Van Schalkwyk’s watch strap, most likely when Aggett said he struck him.

Chauke told the court that the medical doctor and trade union organiser “knew him and encouraged me to study further”. He acknowledged that Aggett had no reason to make up lies about him and said he had been surprised when his name was mentioned when Aggett filed his complaint of assault.

In his fantastical retelling, Chauke sat reading a newspaper during the interrogation session with Aggett.

“I didn’t concern myself with what was said between the detainee and the white officers and I didn’t witness any fight,” he told the court.

According to him, Van Schalkwyk and Lieutenant Steve Whitehead were only “having a conversation” with Aggett. He said Aggett sat and typed and Whitehead read his statement. Chauke said his role was to escort Aggett to and from toilet breaks, to bring him lunch and to take him to and from the cells.

His sanitised version of the interrogation was challenged by testimony from another former detainee, Maurice Smithers, during last year’s proceedings, as well as Aggett’s own statement, and still Chauke offered up denials and at best the probability that Aggett could have been assaulted and tortured when he was not present.

Chauke added that during his entire time on the notorious 10th floor of John Vorster Square he never heard any shouting and screaming from detainees crying out in agony and pain. He said he never saw police officers becoming angry or aggressive with detainees. He said he never witnessed detainees being subjected to strenuous exercise or being made to stand long hours, or being deprived of sleep as interrogation techniques.

The NPA’s advocate Jabulani Mlotshwa eventually said to Chauke: “Seems to me, you just came here and told yourself you’re going to deny anything and everything.”

More damning for Chauke was Mlotshwa’s sketching of events of an alleged second assault on Aggett on 25 January 1982. Aggett did try to complain about this incident, 15 hours before he was found dead in his cells, to Sergeant Aletta Blom (now Visser). Mlotshwa put it to Chauke that the 25 January assault was payback, meant to punish Aggett for having reported them for the assault on 4 January.

Mlotshwa pointed out that another detainee, Jabu Ngwenya, testified that on 25 January he was on the 10th floor and saw Chauke and Aggett enter one of the interrogation rooms used by two black lieutenants.

Aggett had been brought up from the cell by a black lieutenant – unusual because officers of that rank didn’t ordinarily do this duty. According to Ngwenya, two white officers, believed to be Whitehead and Van Schalkwyk, entered the room. He testified that “their eyes were wide and they looked like hunters as they entered the room shouting ‘Waar is hy? Waar is hy? [Where is he? Where is he?]’.”

Mlotshwa told Chauke that another detainee, Thabo Lerumo, had noticed Aggett’s condition when he was returned to his cells on the afternoon of 25 January. Lerumo said that Aggett was handcuffed, and walked haltingly, as if he was in pain. There was blood above his left eye and Aggett had tears in his eyes.

Chauke denied all of this and added that he liked Ngwenya. He said they “were friends and were comfortable with each other”.

The court heard that Chauke was handpicked from Police College to join the Security Branch, starting out in Pretoria as a filing clerk before joining Cronwright’s crew at John Vorster Square.

Advocate Howard Varney, acting for the Aggett family, put it to Chauke that he had become “one of the trusted black officers”, not insignificant in the racially segregated Security Branch of the 1980s.

“Trusted” also meant being part of what the court has repeatedly heard was a code of silence, a culture of intimidation to toe the line, routine cover-ups, and doctoring statements and testimonies by omitting information or fabricating evidence.

The court heard how occurrence book entries at John Vorster Square were routinely not signed, ostensibly so that no one could be held accountable. Dates on statements also do not correspond to accounts of incidents.

Chauke admitted that Cronwright had written his affidavit regarding the assault complaint Aggett made. He insisted he had “read over it and signed it”. He said he let Cronwright write it because it was written in Afrikaans, not because he had to fall into line with the narrative the Security Branch tried to control.

Chauke said he had not been intimidated or made to stay silent. He said he was not “afraid of anyone” and had not been coached in giving testimony previously, or in these current proceedings.

Varney told Chauke before he was excused that had “been less than frank” and was “dishonest” with the court. Chauke shrugged and said it was up to the court to decide on his truthfulness, maintaining that he had not lied. DM