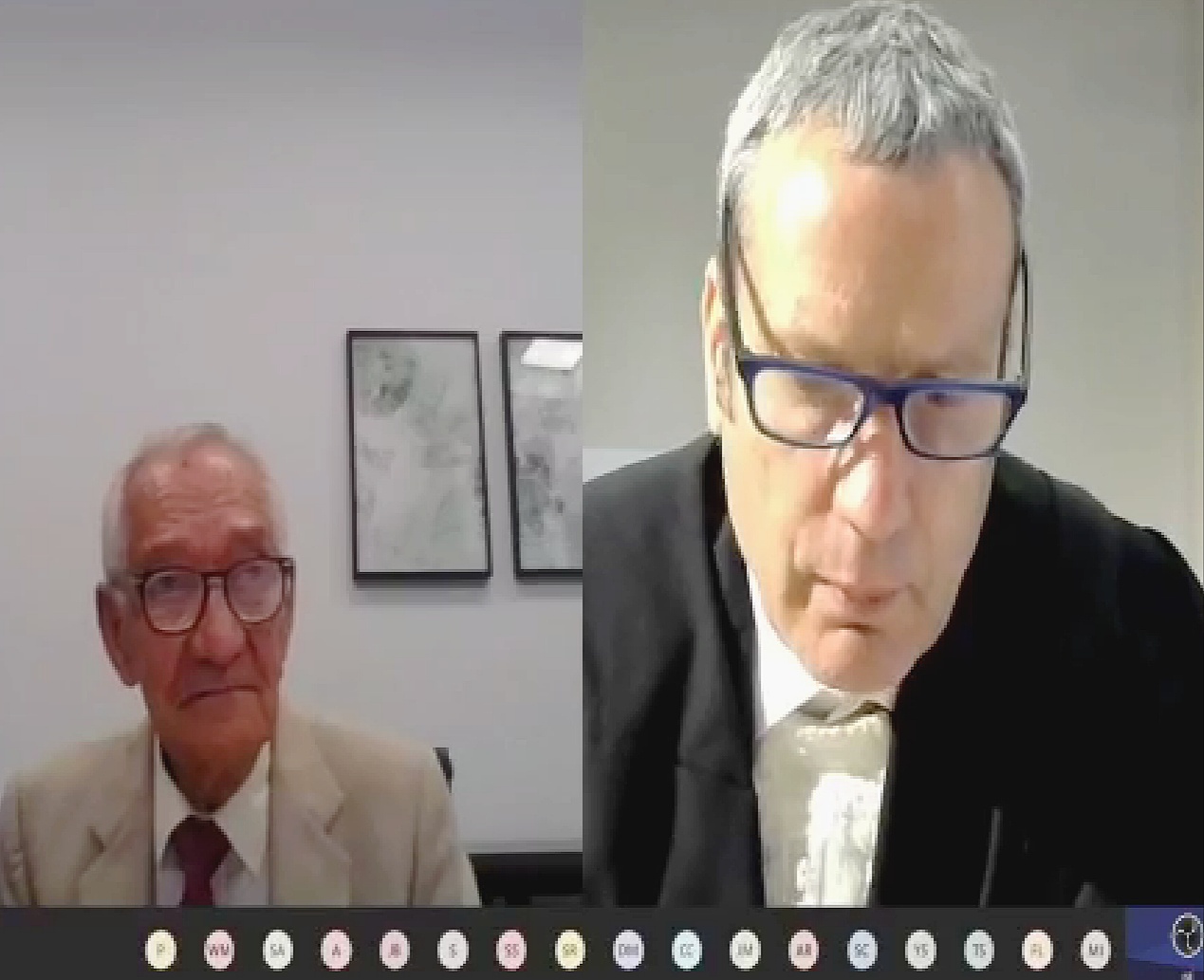 A screen-grab of the virtual proceedings into the reopened inquest into Dr Neil Aggett's death. On the stand (left) is former Security Branch captain Johannes Nicolaas Visser. At right is Advocate Howard Varney, acting for the Aggett family.

A policeman pointed out by several detainees as a vicious and brutal interrogator told the reopened inquest into Neil Aggett’s death that even today he did not believe Security Branch cops used torture and assault as interrogation tactics.

He may not have wanted to hear it and denied it throughout, but Johannes Nicolaas Visser’s two days in the witness stand have come down to confronting unquiet ghosts in the form of allegations against him as a violent abuser and cruel torturer.

Now 87 years old, Visser was a captain in the Security Branch based at John Vorster Square in 1982. He was in charge of the section dealing with non-white affairs.

He said, speaking through an interpreter, that he met Neil Aggett, the doctor and trade union organiser, just once during an interrogation shift. Visser was part of the tag team of police officers that interrogated Aggett over a continuous 60-hour period between 28 January and the early hours of 31 January. Aggett was found hanged in his cell days later on 5 February 1982. His death was ruled a suicide by the original inquest into his death, which has been disputed by Aggett’s family and friends.

By his own testimony, Visser’s work as head of the non-whites division in the Security branch, focused on uncovering information about banned organisations such as the ANC. He wasn’t familiar with Aggett’s case, he said, and wasn’t given specific instruction by Major Arthur Conwright, who headed the 10th-floor operations, when he was told to report to begin an interrogation shift. He was only told “to get co-operation from Aggett” and said he worked off Aggett’s notes during the 12-hour interrogation he conducted with Captain Daniel Elardus Swanepoel.

He recounted that Aggett didn’t look tired to him, was allowed to stretch his legs, to make notes and to smoke. He was also given his breakfast and lunch and at one point Visser said Swanepoel bought Aggett a meat pie and a cool drink.

Visser was asked about Swanepoel’s so-called classified information on Aggett that had not been shared with him before or after the interrogation. This left Howard Varney, advocate for the Aggett family, calling the “sensitive” information a fabrication and that Visser and Swanepoel were merely deployed to keep Aggett awake and to make his life hell, rather than to truly extract any kind of confession from him.

Visser was medically boarded after a back injury in 1984, leaving the force with the rank of major. He had by then completed a stint in Oshakati, in Namibia (then South West Africa). Oshakati was also where the notorious Koevoet police unit — deeply disgraced for its now well-documented human rights abuses — was based.

Two days of virtual testimony on Monday and Tuesday was marked by Visser’s wholesale denial of all allegations of abuse and torture or a cover-up by him or his colleagues. Visser also told of how friendly and cordial relationships between him and some detainees had been.

Visser also testified that in 1982 he was not aware that his interrogation of Aggett took place at a point when the activist had been kept awake for more than 50 hours.

More “improbable” testimony from Visser was that he met another detainee, Auret van Heerden, in the intervals between Van Heerden’s interrogations on the 10th floor of John Vorster Square. He said Van Heerden asked to join Visser at the police gym and he had allowed it. He said this occurred on at least three occasions and described a chummy relationship that formed.

Van Heerden, who was detained at about the same time as Aggett, later filed civil charges against Visser and nine other police officers.

Van Heerden fingered Visser as the man who hit him with an open palm (ostensibly not to leave bruising, the court has heard) as he was held down by two others. He also told of being beaten, suffocated to the point he thought he was going to die and that he was given electric shocks and forced to crouch while his wrists were tied to his feet.

Van Heerden’s testimony also detailed a kind of sick respect Visser and his colleagues developed for him because he survived the torture meted out to him. He remembered that Visser massaged his back after it had taken significant strain from his being bound in an awkward position during interrogation. It was at that point, Van Heerden said, that Visser invited him to work out at the police gym.

Visser called Van Heerden’s claims lies and said he never received a summons regarding the civil charge and never appeared in court on the matter. The court did in fact find in favour of Van Heerden and awarded him damages, which Visser said he also didn’t know anything about.

Varney confronted Visser with allegations made by other detainees about his viciousness and brutality. During proceedings in February 2020, Ismail Momoniat testified that it was Visser who routinely threatened him and assaulted him. In playing good cop/bad cop Visser was always the bad cop.

Barbara Hogan, who was also a detainee at the time, singled out Visser as one of the police officers who verbally abused her, threatened her with violence and often made her stand for long periods with her hands cuffed behind her back.

Visser was dismissed by the end of the Tuesday, but not before Varney told him: “You have covered up the real facts to this court as you did in 1982. You have been evasive; you have not been a credible witness and you have perjured yourself.” DM/MC