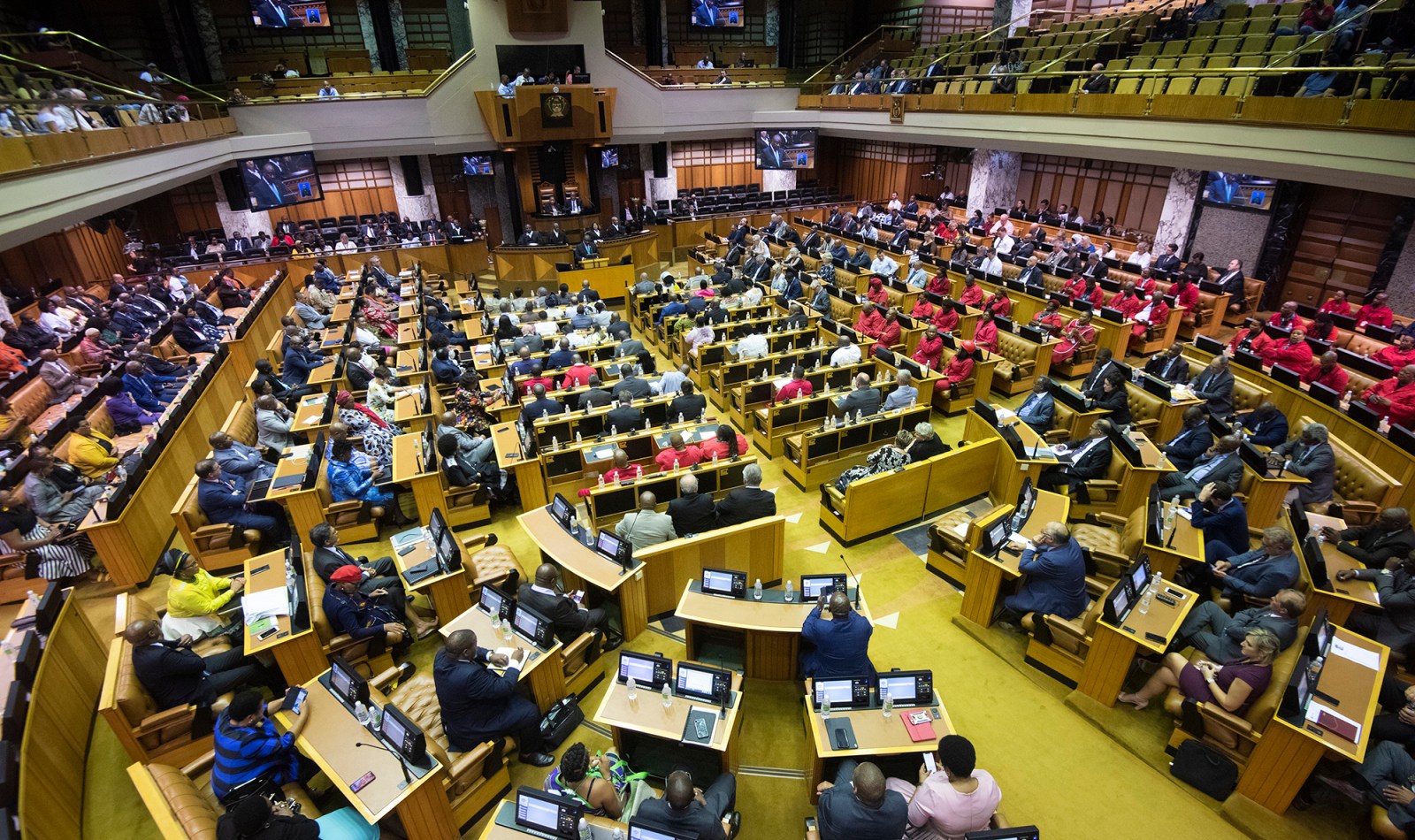 President Cyril Ramaphosa is expected in the House for his 2021 State of the Nation Address (SONA), but the parliamentary precinct – in a first since 1994 – will not feature any military and fashion spectacles. Like the scaled-back US presidential inauguration, it’s a consequence of the Covid-19 pandemic. SONA, on 11 February, will mark Lockdown Day 322 for South Africa.

“Various ceremonial aspects that usually characterise the SONA have been suspended” was the official decision. Parliament, as “part of society” struggling with Covid-19, could not stand in isolation, said National Assembly Speaker Thandi Modise on Wednesday, adding it was important to hold SONA “in a very sensitive manner”.

But the real question and challenge for Parliament lies in the daily pursuit, or not, of its constitutional responsibility of oversight and holding ministers, directors-generals and organs of state to account.

The tools are there. Not only does the Constitution have Parliament’s back, the legislature’s rules also outline extensive powers, including any committee being able to “summon any person to appear before it to give evidence or to produce documents” under Rule 167.

Failing parliamentary oversight came into focus at the Zondo Commission this week when State Security Agency (SSA) acting director-general Loyiso Jafta testified on the politicisation of the service and the siphoning off of millions of rands. He recalled then National Assembly Speaker Max Sisulu bemoaning the failure of Parliament’s Joint Standing Committee on Intelligence (JSCI) to submit its statutorily required annual reports.

“I know for a fact for a couple of years the JSCI did not tender the reports. The question then is were they robust enough in exercising oversight,” said Jafta. To which Zondo responded: “Even if they tendered it [the report], what explanation was given for their failing to do this at the appropriate time?”

That’s easy – none. The JSCI oversight reports that, by law, must be submitted by the end of May every year and within five months of a committee being established, simply get submitted if and when.

The JSCI reports for the 2010/11 and 2011/12 financial years – most likely the reports Jafta was referring to – were eventually published on 6 March 2014 in the Announcements, Tablings and Committee Reports (ATC), or the record of Parliament’s work. The 2012/13 report was stretched to cover the period to February 2014, or just ahead of Parliament rising for the May 2014 elections, and published in the ATC on 10 April 2014.

This 2018 JSCI annual report brings parliamentary oversight failures into relief. It contains not a single word on the “R125-million [that] could not be accounted for” in the 2017/18 financial year, according to Jafta’s Zondo Commission testimony.

Instead it talks about how the Secret Account remained “a very difficult matter to resolve”, and the deadlock between intelligence accounting officers and the Auditor-General were not addressed, even after a joint international benchmarking trip.

“The matter has also not been finalised. The JSCI therefore intends to pursue it in the financial year ending 31 March 2019,” says the 2018 JSCI report. It recommended that, “when huge amounts of money have been allocated to operations, a list of successes must be compiled to justify the funds allocated”.

Those missing millions and assets worth R9-billion, which the Zondo Commission was told also could not be accounted for, had slipped through the parliamentary oversight net.

No push for transparency

As a rule, Parliamentary questions are not answered; most recently they are referred for a response to the JSCI, which sits behind closed doors. The trend of not meeting statutory deadlines for JSCI reports seems to continue.

After the May 2019 elections, the JSCI should have submitted its first report within five months of being established. The report dated 27 October 2020 was published on 11 November 2020 in the ATC.

The report says security vetting of MPs delayed the committee’s establishment to November 2019, after which it was hamstrung by the lockdown.

“Due to the nature of its operation, the JSCI was unable to hold meetings because of cybersecurity concerns concomitant with MS Teams and Zoom … Approval was granted for the JSCI to convene in Pretoria for special meetings with Intelligence Services and the OIGI [Office of the Inspector-General of Intelligence].”

JSCI chair Jerome Maake is a securocrat and not given to pushing for transparency and accountability, if his previous track record in the police and defence committees is anything to go by.

Though securocrats may claim even non-operational disclosures as threatening national security, in law that’s not a shield for corruption, wrongdoing and malfeasance. Crucially, national security is defined in the 2013 General Intelligence Laws Amendment Act in terms of protecting the people and territorial integrity of South Africa.

National security threats include terrorism, espionage, sabotage and hostile foreign acts. The threat of “exposure of a state security matter” seems to be what smoke-and-mirror gamers invoke for not accounting. But that’s disingenuous. It ignores an important qualifier: any exposure of a matter of state security is only a threat to national security if it is done “with the intention of undermining the constitutional order”.

An argument can be made – and, in many ways, is being made before the Zondo Commission – that it is State Capture, corruption and the perversion of state institutions for political purposes that have undermined South Africa’s constitutional democracy.

The JSCI is the only parliamentary committee established in law, the 1994 Intelligence Services Oversight Act, indicating the seriousness with which the first democratic Parliament took civilian oversight of intelligence services.

One would have thought Parliament, as the legislative sphere of state, would push to maximise its role – and the constitutional responsibility to hold the executive and organs of state to account. But it seems shaky, even on priorities such as Covid-19 personal protective equipment (PPE) and vaccines.

Yes, MPs debated Covid-19 procurement corruption on 27 October last year – as it turned out, strictly along the usual party-political point-scoring faultlines. And, on 23 February, the House will debate the vaccine rollout in a DA-sponsored debate of national importance.

Yes, Health Minister Zweli Mkhize has briefed Parliament’s health committee, even if MPs have taken to showboating. When more time is taken up by commentary than by pertinent questions to achieve transparency and accountability, oversight falls by the wayside.

A request from Mkhize to make a ministerial statement in the House seems to be still pending. But the important stuff apparently gets discussed first elsewhere: live televised health ministerial webinars or the ANC National Executive Committee (NEC) meetings, like its lekgotla over the weekend of 23 January.

Parliament’s health committee was briefed on a Covid-19 vaccine rollout on 7 January, but the ANC’s NEC meeting got more details in slides than  Parliament did.

“[National] Treasury reviewing updated budget request from NDOH [national Department of Health] and will substantially increase the budget allocation for Covid-19 vaccines,” indicated ANC NEC member Joe Phaahla, also deputy health minister, in his presentation. The vaccine cost was “as much as R8-billion to R10-billion for Covid-19 vaccines and related services”.

That price tag given in the closed-door ANC NEC briefing documents, seen by DM168, stands in contrast to the R20.6-billion price tag publicly communicated to MPs on 7 January.

Then, in Parliament, the health ministry did not provide a full breakdown of funding options – and no other parliamentary committee, for example the Standing Committee on Appropriations, has called for briefings.

The lekgotla presentation listed “predominantly funded from fiscus, in line with principle of public good”, adding the private sector could “supplement through medical schemes and workplaces” alongside donations from, for example, the Solidarity Fund.

On Wednesday, the Treasury, in its interaction with the South African National Editors’ Forum, reiterated vaccines would be funded – full stop. It was working on a cost of R20-billion to R24-billion, but final figures will only be in the Budget on 24 February.

Later on Wednesday, in the latest of the live televised Covid-19 webinars  Mkhize has hosted during the Covid-19 lockdown, no rands and cents emerged, but hints of the likely funding arrangements echoed what came out at the ANC NEC.

“Vaccines will be funded from the fiscus. It will be augmented by private funding sources,” said National Health Insurance technical adviser Aquina Thulare, who’s also on the Covid-19 Partnership Task Team.

Extraordinary detail emerged in Wednesday’s Covid-19 webinar: from vaccine purchases at an unspecified set exit price, through wholesalers from a central distributor, to how everyone must pre-register and book for vaccination. It’s not quite the stuff of late-evening television viewing, but it is within parliamentary oversight across various committees.

We must ask why Parliament is not where important public interest and policy announcements are made. Answers lie beyond parliamentary scheduling, and beyond tensions between party loyalty and MPs’ oaths of office to obey, respect and uphold the Constitution. It’s about values and what, as a society, is deemed important.

When ministers and officials feel they can avoid scrutiny, it diminishes Parliament, which the Constitutional Court 2016 Nkandla judgment said is “the watchdog of state resources, the enforcer of fiscal discipline and cost-effectiveness for the common good of all our people.” This should never be forgotten. DM168