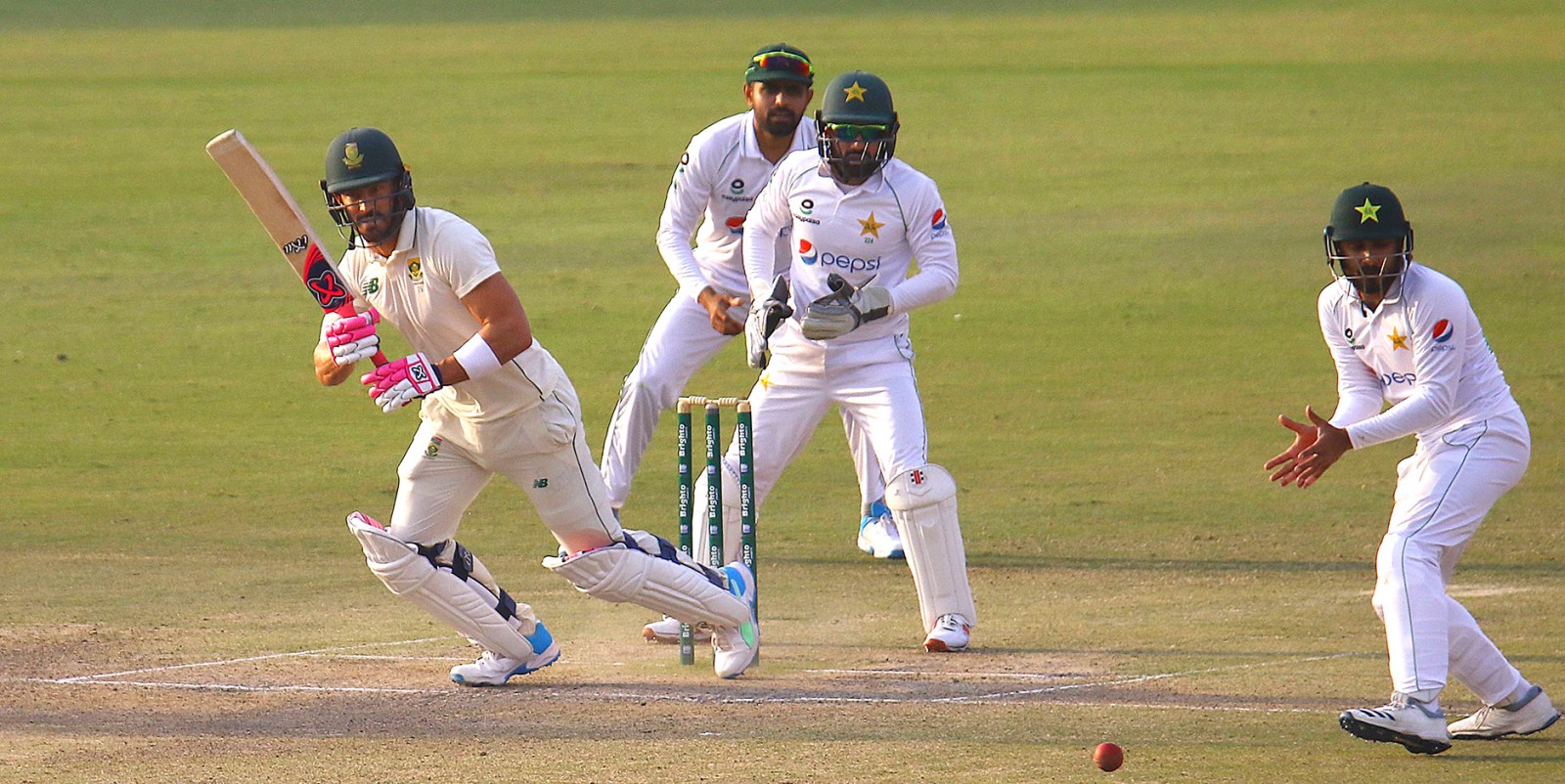 Pakistan took a 1-0 lead in the two-Test series against South Africa, winning inside four days in Karachi on Friday.

Lack of first-innings runs cost South Africa a realistic chance of winning the first Test against Pakistan in Karachi. The home side swept to a seven-wicket victory midway through the fourth day in the first series between the sides in Pakistan for 14 years.

It was a deserved win for Babar Azam’s men, who bowled well and batted exceptionally well in their first innings, to set up a needed win after their recent series defeat in New Zealand.

After winning the toss, South Africa captain Quinton de Kock understandably chose to bat, only for the Proteas to crumble to 220 all out on day one.

There were no demons in the pitch and at least four top-order dismissals were down to Protea errors with two run-outs and two soft dismissals. Those dismissals left the Proteas at 100 runs short of a par first-innings score and from there they were outplayed.

Pakistan replied with 378 for a 158 first-innings lead. Despite a brilliant 127-run second-wicket stand between Aiden Markram and Rassie van der Dussen, which wiped out the deficit and took the Proteas to 175 for one late on day three, Pakistan’s spinners had the final say.

Elgar and Markram put on 48 for the first wicket before Elgar was caught by wicketkeeper Mohammad Rizwan off leg-spinner Yasir Shah for 29. Elgar, who two overs previously was struck on the fingers by fast left-arm Shaheen Shah Afridi, was in obvious pain as a consequence.

The left-hander played on with courage, but his poorly executed sweep shot was a stroke of a batsman whose concentration had been upset. He is in doubt for the second Test.

Markram and Van der Dussen steadied the innings with their century stand, but Yasir and Nauman Ali struck with three late wickets to leave South Africa at 187 for four at the close – effectively 29 for four. In a flash, they undid South Africa’s toil and swung the balance of the match back in their favour.

Van der Dussen (64) was eventually foiled by the flight of Yasir delivery and prodded the ball to silly mid-off where Ahbid Ali took the catch.

Faf du Plessis came and went for 10, trapped leg before by Yasir before Pakistan nabbed the big wicket of Markram (74) when Nauman had him caught at silly mid-off.

It started a major collapse as the Proteas were dismissed for 245, leaving the home team needing only 88 for victory.

Ultimately it was the Pakistan spinners that proved the difference and demonstrated to Proteas coach Mark Boucher what is needed to win the second Test in Rawalpindi.

Yasir and Nauman took 14 wickets between them, including nine in the second innings. Nauman, at 34 years-old on debut, took five for 35 while Yasir took four for 79. South Africa’s Keshav Maharaj and George Linde took four wickets between them in nearly 50 overs. They, of course, didn’t have a massive total on the board to add pressure though.

Opener Elgar, as has become the norm, provided the backbone to South Africa’s first innings. His 58 was a combination of attractive strokes, nurdles and nudges.

Elgar and Van der Dussen were going along serenely enough, adding 33 for the second wicket when calamity struck. Van der Dussen drove straight to Babar at deep mid-off. Van der Dussen immediately set off but Elgar, at the non-strikers’ end, was having none of it. In a blur, Van der Dussen braked, turned, dropped his bat, charged back towards his crease, dived desperately and hopelessly before being left stranded short of his ground. He was on 17.

South Africa provided the hosts with more light entertainment by throwing key wickets away. De Kock fell in typical fashion after a short period of playing with discipline. After hitting one boundary in 22 balls, De Kock attempted to heave the 23rd over cow corner.

He was beaten by the flight of 34-year-old debutant Nauman’s delivery and holed out at midwicket where Imran Butt took a sharp catch. It was the most Quinton de Kock of Quinton de Kock dismissals and an example of impatience that was unbecoming of the skipper.

Elgar edged to slip off Nauman’s slow left-arm and Du Plessis (23) was caught behind by Rizwan off Yasir.

Temba Bavuma (17) managed to run himself out in a third unnecessary dismissal, leaving the lower order to salvage some respect after the top order largely squandered their opportunities.

By the close of play, Pakistan were 33 for four, thanks to superb bowling from the seamers with Kagiso Rabada leading the way. Rabada took his 198th and 199th wickets.

In six disciplined and hostile overs in the slanting Karachi sun, Rabada removed openers Abid Ali (4) and Butt (6) with two snorters to open up Pakistan’s innings. Slow left-armer Keshav Maharaj then claimed the big scalp of captain Azam in his first over of the day. And shortly before the close and fast bowler Anrich Nortje castled nightwatchman Shaheen Shah Afridi.

Only century of the match

But on day two Fawad Alam blunted the Proteas attack on his way to 109. It was the only century of the match. Fawad’s innings was a mixture of aggression and patience, as he shared useful partnerships with Azhar Ali (94 off 228 balls), Rizwan (55 off 113) and Faheem Ashraf (102 off 152). They made the Proteas’ bowlers toil.

The National Stadium in Karachi is the 35-year-old Fawad’s home ground and a place where he revels in batting, averaging 69.97 in first-class cricket at the venue. It was no different against the Proteas.

South Africa knew that an early wicket could expose the lower middle order while the bowlers were still fresh. Fawad and Azhar ensured that never happened, carrying their bats through the entire first session. When lunch was called Pakistan were on 104 for four and South Africa’s heads were dropping.

After the meal, the Proteas managed to remove Azhar for 51, caught sharply by wicketkeeper De Kock of Maharaj’s slow left-arm. Azhar, having gone to his half-century four balls earlier, tried to cut a delivery too close to his body and succumbed.

But the breakthrough didn’t signal a collapse by Pakistan. Instead, Fawad renewed his resolve and received good support from Mohammad Rizwan (33) and Faheem (64) as the home team piled on the misery.

It didn’t help that De Kock used up his team’s three reviews on speculative dismissals and the skipper later dropped Ashraf to add to his miserable day. But De Kock’s woes aside, nothing could detract from Fawad’s contribution.

But Fawad’s resistance was decisive and when the Proteas had too much to do in their second innings. Pakistan knocked off the winning runs with three wickets down to gain a confidence boost heading to Rawalpindi on 4 February.

For the Proteas, they have lots to ponder. DM