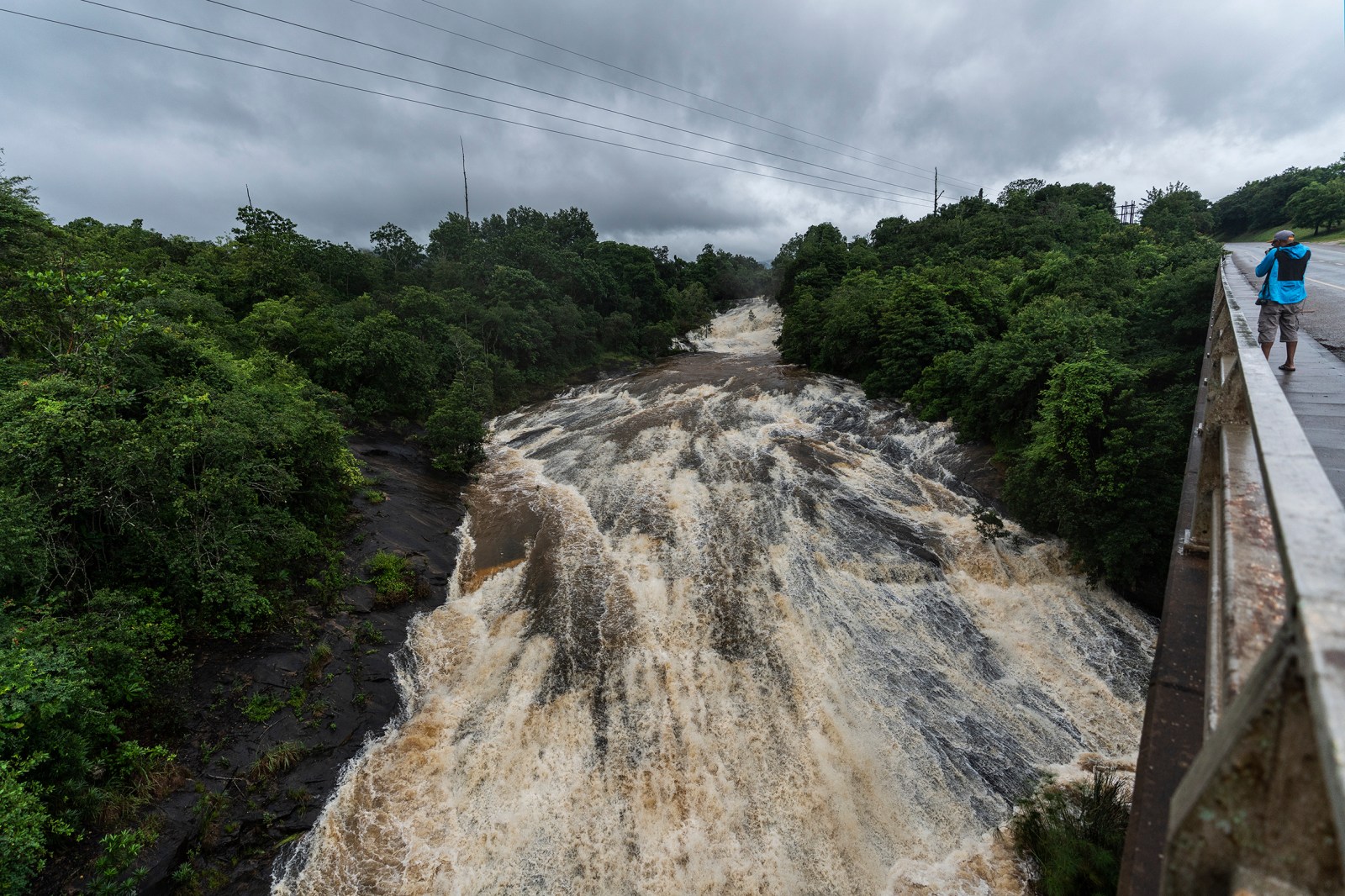 The overflowing Hans Merensky Dam in Limpopo. The dam level had risen to 109.55% as a result of the tropical storm. (Photo / Shiraaz) Mohamed.

South Africans watched in horror as images circulated after Cyclone Eloise ripped through the Mozambican coastal city of Beira at the weekend. In South Africa, at least four people were killed. In the cyclone's aftermath, there has been some relief for water levels.

The cyclone was downgraded to a tropical storm after losing its strength but disaster management services in Limpopo, KwaZulu-Natal and Mpumalanga were put on high alert and activated their contingency plans and response measures, in preparation of the expected after-effects.

The South African Weather Services (SAWS) predicted possible flooding and Daily Maverick undertook a trip to Limpopo and Mpumalanga as the storm worked its way inland, dumping rain along its path. While the extent of the damage was significantly less than expected, the storm wreaked havoc, claiming the lives of at least four people.

Minister of Cooperative Governance and Traditional Affairs Dr Nkosazana Dlamini-Zuma reported that two people had died following heavy rain. A five-year-old boy who was swept away by floods in Mpumalanga and a 14-year-old who drowned in KwaZulu-Natal. Connor Hartnady from the Department of Emergency Medical Care at the University of Johannesburg also confirmed the deaths of two more, a 35-year-old man who drowned in the Blyde River and a one-year-old child who was swept away while trying to cross a river in Elukwatini with his mother.

A road leading into Tzaneen was strewn with debris and further evidence of heavy rainfall. Cars were parked on a bridge as people stopped to have a look at the overflowing Hans Merenskydam. The dam level had risen to 109.55% but more rain was hoped for elsewhere in the municipality. According to Odas Ngobeni, spokesperson for the Mopani District Municipality, its two biggest dams in the district — the Tzaneen Dam and Middle Letaba Dam were sitting on 21.71% and 0.70% before the rain. A report from the Department of Water and Sanitation shows both dams had increased to 36.26% and 2.40% respectively.

Said Ngobeni, “We actually hope for more rain. We were faced with a serious drought crisis. We have been instructed to stop abstracting water from the Middle Letaba Dam and that is a huge blow to communities benefitting from that dam, especially around Giyani.” Some of the dams play a vital role in supplying water to their farming community.

In Vhembe district a woman said she was afraid that her village would be flooded and she did not sleep the entire night after hearing news of possible flooding. Her village, despite being placed in the red level 10 zone, was not affected but the storm had caused damage to houses, electricity lines and roads in other villages. Xigalo and Manele were the areas hardest hit.

Ironically, the local municipality is happy that the rain has provided relief to its dams, which serve as a main water source. Said Ralushai Matodzi, communications manager for Vhembe District Municipality, “The district agriculture will produce enough food for the community of Vhembe and commercial farmers will recover financially. The filled dams will provide water. The rain has economic benefits which will provide food security to the community of Vhembe.”

In the Kruger National Park, between the Punda Maria Gate and Pafuri Gate, remnants of the storm remained. Mud and watermarks around trees gave an indication of the hight of stormwater levels. Smaller trees remained submerged in the remaining surface water. The Luvuvhu River showed signs of a significant rise in water levels, with much bigger trees remaining submerged.

Staff at the Lowveld National Botanical Gardens in Mbombela also welcomed the rain with visitors marvelling at its spectacular waterfall with water gushing in from Crocodile River. Taki Mamatsharaga, curator at the Lowveld National Botanical Garden said, “The previous two years were very stressful for us and others relying on the Kwena Dam for the irrigation of the plants in the garden.

“The dam should be around 80% full during February but this was not the case during the past two years. The dam was 40 to 50% full, leading to severe water restrictions. This led to the upkeep of the garden being negatively impacted. This rain is such a huge relief for us.” DM