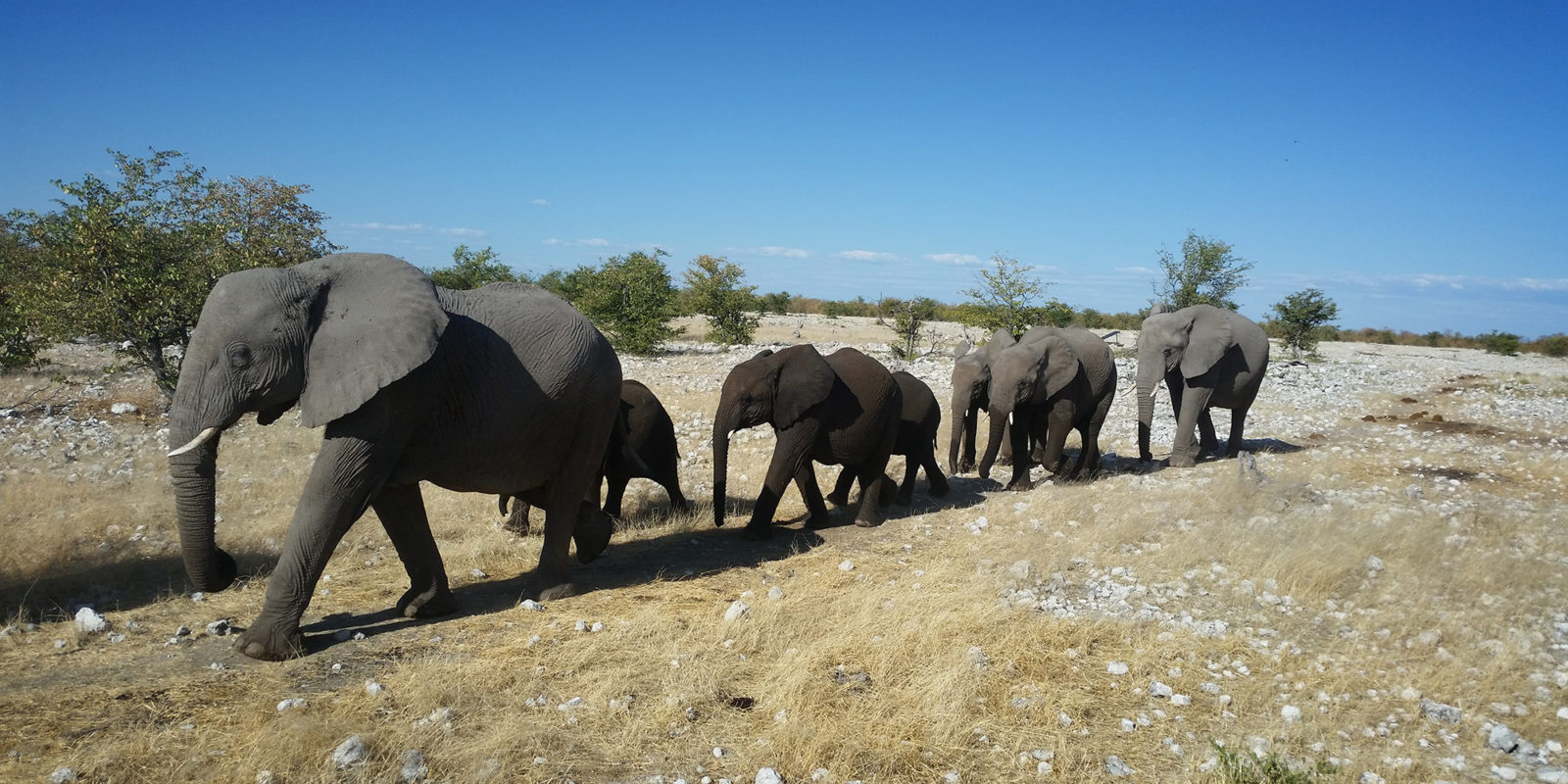 Many of the targeted Nambian elephants are from transnational herds which migrate across countries, as they have for thousands of years. This photograph is of a herd in Etosha. (Photo: Stephan Scholvin)

The Namibian government will put 170 wild elephants up for sale on 29 January, justified by false population statistics and disputed claims of human-elephant conflict. More than 100,000 people have signed a petition condemning the action.

The Namibian government says it has too many elephants and that the 170 are problem-causing animals. According to professional guide and conservationist Stephan Scholvin, about 90 are to be captured on former indigenous San ancestral lands which have been seized and distributed to political elites. They sold logging rights in the area to the Chinese, who have “completely decimated” the endangered African rosewoods.

With the government just emerging from a corruption scandal exposed by Al Jazeera, resulting in the imprisonment of the Ministers of Justice and Fisheries, there is deep mistrust over its latest scheme.

Many of the targeted elephants are from transnational herds which migrate across countries, as they have for thousands of years. Conservationists argue that they do not belong to any one country for their exploitation or slaughter.

“For thousands of years,” says Mark Hiley of National Park Rescue, “matriarch elephants have been leading their herds across multiple countries on huge migrations each year. Although we’ve slaughtered 95% of all Africa’s elephants in 100 years, the last of these great herds still carry out their epic journeys. These international elephants don’t ‘belong’ to anyone and Namibia’s proposal to capture and exploit them is a crime against nature.”

“Their official statistics show 23,736 elephants, but the figure is probably closer to 5,600. Compare this to their smaller neighbour, Botswana, which has 130,000 elephants, and you can see the claims of overpopulation are ridiculous.”

Elephants are now extinct in 29 African countries and are under increasing threat from the ongoing explosion of human populations, poaching and government-sanctioned exploitation.

The elephants Namibia is trying to sell are actually part of a population in decline. In just one incident, more than 30 elephant carcasses were spotted in November 2020 along the Linyanti River.

Adding to the suspicion of corruption is that no mention of the sale of problem elephants was made at the recent Namibian Elephant Management Plan meeting, according to conservationists. They have proposed conflict-avoidance solutions, including elephant water points away from villages, electric fencing and elephant corridors, but the government claims it was not aware of these proposals.

Many of the elephants being targeted are in some of the lowest elephant population areas in Namibia and part of some of the highest percentages of trans-boundary elephants in the country. The government has refused to share a 2019 aerial survey alleged to contain population information, which may have been provided by WWF Namibia.

In December 2020, a government official let slip that Namibia had tried but failed to gain international permission to sell off its 50-tonne ivory stockpile, potentially to east and southeast Asia.

According to conservationists, the public auction may be a show to help justify an already planned cull of these elephants, with hunts sold to hunters under the country’s “damage-causing animals” classification. The government may have already sold hunting licences to buyers such as a Mexican millionaire who owns Erindi.com and Russian billionaire Rashid Sardarov.

According to Namibian journalist John Grobler, the tender could be an attempt to retain the rural vote after a poor showing by the South West Africa People’s Organisation (Swapo) in the recent local government elections – the strongest lobby behind the sale being the small-scale commercial farmers of Kavango East and the larger commercial farmers of Kunene and Erongo. None of them likes elephants.

Other possibilities include paid-for clearing of land for powerful cattle farming groups or oil companies. It could also be part of an international zoo deal (the tender mentions international permits).

“There’s an inherent problem in how to coexist with — or manage — species that naturally migrate across imaginary human boundaries such as international borders,” says Dr Niall McCann of National Park Rescue. “From fishing rights to migratory birds to transboundary elephants, the problem remains the same: who should be allowed to exploit these animals?

According to Mary Rice of the Environmental Investigations Agency, “we need to stop viewing wildlife through the lens of immediate cash return and learn to understand the value of wildlife as a living and breathing part of a functioning environment. Wildlife, including elephants, deliver tangible benefits to people in terms of ecosystem services, which will collapse if biodiversity collapses. Wildlife also delivers huge intangible benefits in terms of cultural identity and personal well-being. A land without wildlife is poorer in so many ways.”

As controversy around the sale swirls, conservationists say there are grounds for suspecting that secret, underhand deals have taken place. A year ago Al Jazeera ran a corruption investigation leading to the imprisonment of the Minister of Justice and the Minister of Fisheries, with new evidence potentially leading to more arrests. DM/OBP