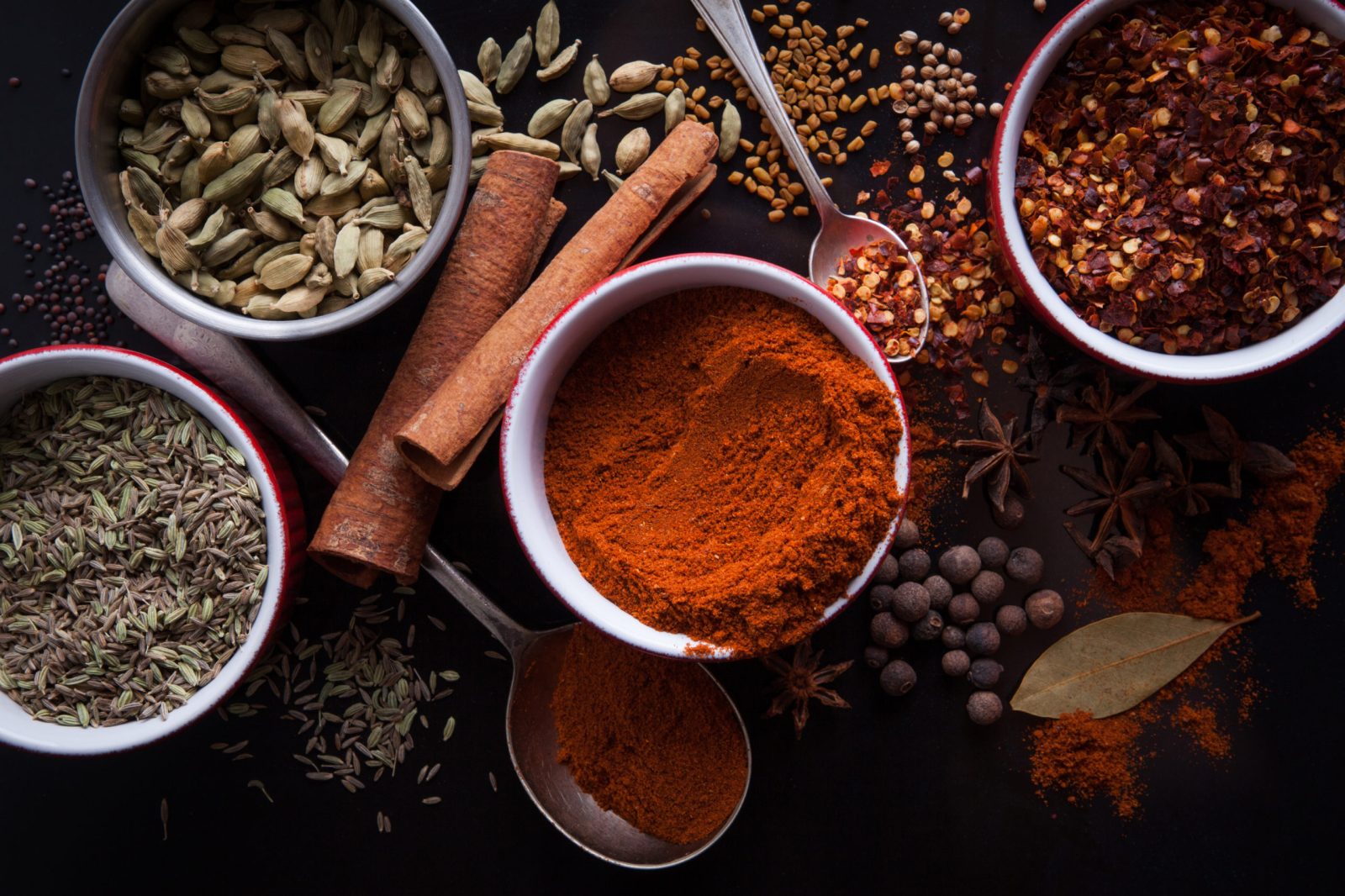 This week brought news that another of South Africa’s food heroes, Khatija Mall, founder of Gorima’s, the delightful little spice shops in KwaZulu-Natal, has died. We dedicate this story about the wonders of the Indian spice box to her memory and legacy.

From sweet saffron to stinking resin, the Indian spice cupboard is heaven for those in search of fragrance and nuance in their cooking.

Indian is the cuisine I experiment and take chances with the most. I fiddle with spice combinations to make my own curry bases and masalas; toast and roast them, braise and praise them, respecting them as an Indian host would a guest, who in the old Sanskrit saying is ‘equivalent to God’.

In a kitchen cupboard I have a big plastic container packed with jars of varying shapes and sizes, labelled coriander, cardamom, jeera, fennel, mustard seeds, turmeric and a host of others, and Durban masala. They all come from one or other little spice shop in Durban, Pietermaritzburg or, most recently, Margate on the South Coast, bought from a sari-swirled lady who knows her fenugreek from her soomph and how to mix them.

There is no point in second-guessing these spice gurus. They know best. All she needs to know is whether you like your masala mild, hot or mother-in-law (there’s hardly any point, just go for mild or hot and add chillies), or whether you intend it for lamb, chicken, seafood or vegetables. Leave the rest to her.

But I do experiment. A dash more of coriander there, let’s try a bit of fenugreek with this curry, and what exactly is asafoetida and how do you use it. (“Sparingly,” says the aunty.) It’s smelly and has been likened to rotting garlic, but can make a bit of magic in the pot. It’s sometimes called Devil’s Dung and its name means ‘stinking resin’.

Our South African Indian curries and the masalas used in their making are so deeply associated with meat, particularly with ‘Durban curry’, that it’s easy to forget that in swathes of India there are millions who never touch meat, let alone eat it. But let’s also not overlook the seafood that is abundant on that humid province’s coast. A good old ‘Natal’ prawn curry is a delight, and the curry mix tastes nothing like any mix our aunty would recommend for mutton or chicken. One secret is tamarind, that strange seed surrounded by a fruity, black pulp which, when mixed with water, becomes the base of a thousand Durban seafood curries.

As with the perfect storm of onion, garlic and carrot in French cooking there are staple bases in Indian cuisine too. Garlic and ginger, fresh and minced together, are paramount. But other key spices are as ubiquitous: I never make a curry without first either dry roasting or braising (in cooking oil or ghee) a tablespoon each of cumin, fennel and black mustard seeds. The last is said to sharpen the intelligence and calm the mind; cumin is used in every part of Indian cooking, and fennel, one of the most prized of Indian spices, shares with cardamom the ability to add depth or nuance to both sweet and savoury dishes.

A piece of cinnamon stick, a bay leaf and a star anise almost invariably are added, and depending on what I am about to cook in it, there might be a few cardamom pods (or the seeds, removed from their pods) or a good dose of turmeric (but too much turmeric and the curry will verge away from Durban and land up in Cape Town). I love a good Cape Malay curry too, but we’re talking Indian spices in the Durban tradition here.

Star anise is a key part of my way with cooking, and in Indian cuisine is used widely even though it does not grow in India but came from China via the Silk Route. Star anise is one of those rare ingredients which you will not always recognise to the taste, but you will realise that there’s just something special about the dish’s flavour.

There’s more in my big spice box. You’ll find nigella seeds there (a.k.a. black onion seeds even though they have nothing to do with onions), allspice (a seed in its own right and not, as some believe, a ground mix of other spices), caraway (used in North Indian cuisine), and sesame seeds, used in India in sweets eaten during the festival of Sankranti, which fell on the 14th of January this year, when the harvest is celebrated annually.

There are Indian spices I’ve never used at all. Ajwain, amchoor (mango powder), and the ginger-like zedoary. But queen of them all is surely the beauty that is saffron, the rusty-golden crocus stigmata that brings a touch of perfumed splendour to any dish it graces. But, use too much of almost any of the aforementioned spices and you may mask saffron’s role in your dish. It can be glorious if allowed to lend a hint of grandeur to a subtly spiced breyani, but otherwise is best left to be the star attraction of a kulfi (spiced ice cream) or a keer (rice pudding).

As Patrick Swayze might have said, nobody puts saffron in a corner. DM/TGIFood