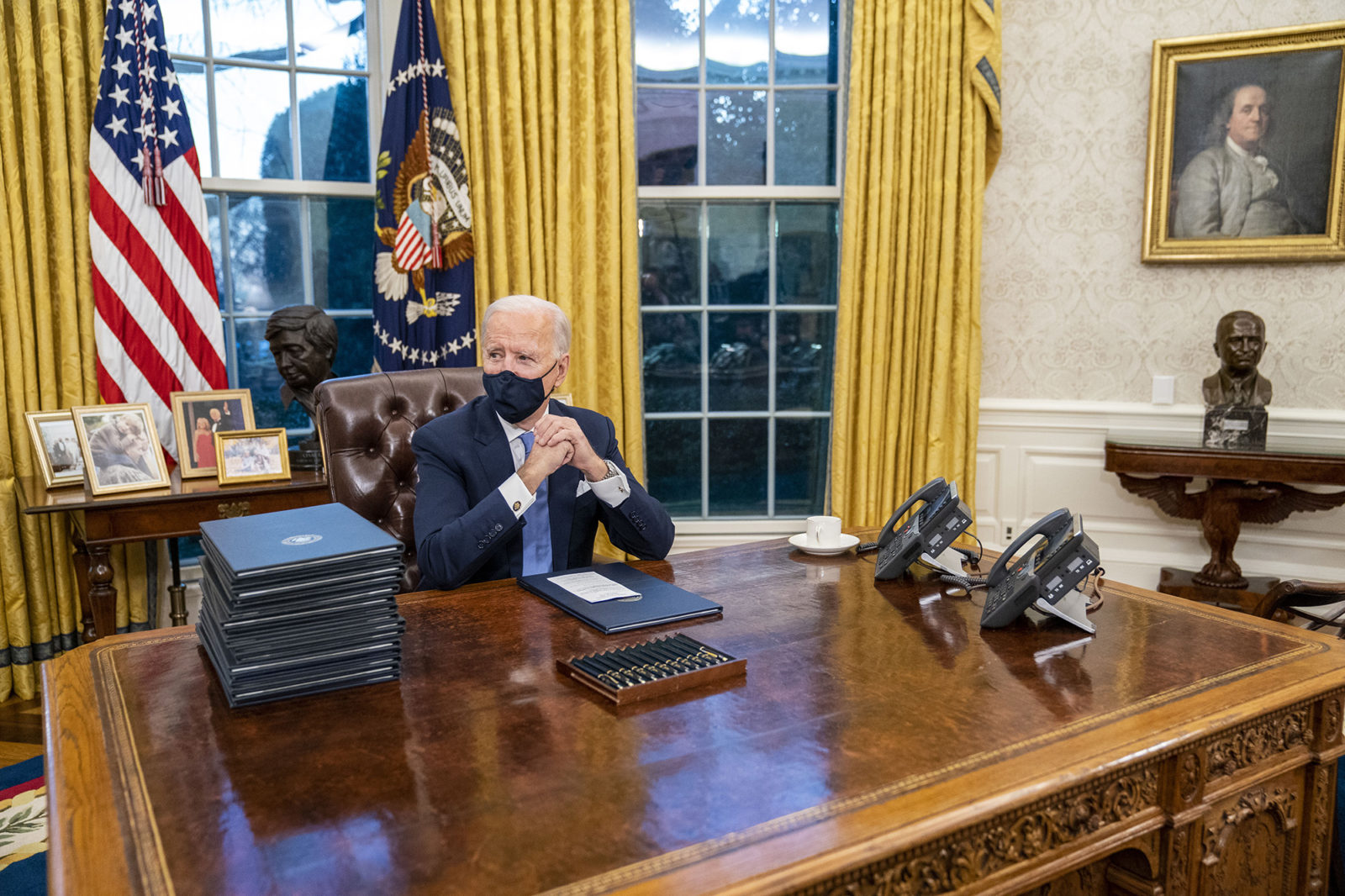 On his first full day in office, the new US president is making no bones about the fact that his biggest fight is against the coronavirus. Biden signed some 17 executive orders on his first day, Wednesday, 20 January 2021, saying as he signed the documents in the Oval Office, shortly after being sworn in: ‘I thought, with the state of the nation today, there’s no time to waste.’

During his campaign in 2020, President Biden always had Covid-19 high on his agenda, focusing on how former President Donald Trump had failed to grapple with the pandemic. Biden had announced in early December 2020 that it was his intention, once in office, to have 100 million Americans vaccinated in 100 days.

On his second day in office, Thursday, 21 January, he announced the extensive measures being embarked on — and signed 10 executive orders to ensure the various departments align and coordinate — which will expand access to Covid-19 testing and vaccinations across America.

If Biden’s plan can be executed without any hitches, the entire country should be vaccinated by the end of April.

The plan includes vaccination centres at conference centres and stadiums as well as extra (Federal) personnel to help administer the jabs. The Biden plan also aims to have essential workers like teachers and grocery store workers to be among the first to be vaccinated. The president also wants to open as many schools as possible and is signing orders allowing for funds to ensure cleaning and other protocols necessary to keep schools open.

The president is also expected to sign an executive order that mandates masks being worn on planes, trains and buses. He said too many lives had been lost, “more than in World War 2” and “we can save more than 50,000 lives” if everyone would wear masks for 100 days.

Biden also said that if people did not adhere to Covid-19 precautions, the number of deaths in the US due to the virus was likely to pass 500,000 next month. Making clear reference to Dr Anthony Fauci as being back in the driving seat, Biden also said that people would be hearing from Fauci as White House Coronavirus Adviser and other “real experts” on measures being taken to combat the virus.

Fauci also earlier on Thursday had a virtual meeting with the WHO after Biden reaffirmed America as a member of the World Health Organisation after Trump withdrew America in 2020.

Rejoining the WHO, Fauci said:

“As a WHO member state, the United States will work constructively with partners to strengthen and, importantly, reform the WHO, to help lead the collective effort to strengthen the international Covid-19 response and address its secondary impacts on people, communities and health systems around the world.”

Biden also announced the Task Force on Racial Disparity in the Health System to look into entrenched racial inequalities in American healthcare. The team will be led by California Attorney General Xavier Becerra, who leaves his post to become the Secretary of the Department of Health and Human Services. Becerra is expected to be confirmed shortly.

On Wednesday, shortly after being sworn in, Biden also signed executive orders to end Donald Trump’s “Muslim travel ban” and cancelled the Keystone XL Pipeline Permit — the permit would allow an oil pipeline from the tar fields of Alberta, Canada, to send crude tar sands/oil sands to be refined in various American refineries. The environmental issues around the pipeline centre on the fact that the pipeline crosses several aquifers critical to agriculture as well as sacred Native American territory.

South Africa’s Desmond Tutu, President Jimmy Carter and the Dalai Lama have all added their voices to the condemnation of the project.

The US Department of Defence also announced on Thursday that it had put the construction works at the US-Mexico border wall on hold after the president yesterday signed an executive order to halt funding of the build.

Raini Brunson, spokesperson for the US Army Corps of Engineers, which oversees border wall contracts, said they would “take the appropriate actions… and will coordinate our actions with the Department of Defense and our partners at the Department of Homeland Security/US Customs and Border Protection”.

The new US president, also on his first day, told his staff that he expected a certain standard of behaviour from everyone working in his office, “and I hear you treated another colleague with disrespect, talked down to them, I will fire you on the spot. On the spot… Everybody is entitled to be treated with decency and dignity — that’s been missing in a big way, the last four years.”

The Department of Homeland Security also issued an announcement that a 100-day moratorium on deportation would begin on Friday, 22 January:

An Wentzel is Night Editor and specialist reporter for Daily Maverick, based in the United States.