Every breath you tech: Welcome to the age of the smart...

It’s not that your mask is dumb, it’s just that these analyse the air, have ventilators, microphones and UV lights, and even talk to Siri.

Long before Covid-19 turned mask wearing into a global practice, companies like AirPop were in the consumer-level protective mask business. AirPop co-founder Chris Hosmer started the company in 2015 while living in China because he “found his two-year-old and newborn both suffering from acute respiratory illnesses in reaction to their local environment”. So goes the origin story on the company’s website. They sell a range of somewhat fashionable and athletic-looking mask styles, made out of high-performance fabrics with patented filters that promise more than 99% two-way filtration. Depending on style and features, they sell for between $7.99 (R120,88) and $69.99 (R1,058,85) a pop, with discounts for bulk orders.

Breathe, but make it future

On 6 January, the 2021 edition of the CES (Consumer Electronics Show), the highly influential annual technology showcase in Las Vegas – was a completely digital affair. AirPop unveiled its “Active+ Halo Smart Mask”, billed as “The World’s First Air Wearable”. As with other wearable tech such as smart watches, the mask goes beyond its basic function and continues the wearables trend of monitoring and quantifying fitness and health data.

It comes with what the manufacturers call the Halo sensor, which works with a smartphone app to monitor the mask’s filter quality and let users know when it’s time to change it, as well as tracking breathing patterns and habits: it is capable of tracking metrics such as breaths per minute and breaths by pace. For those worried about how masks affect their breathing it is also an opportunity to access actual data. It will also analyse the air and tell you which pollutants have been filtered out. And perhaps more useful once Covid-19 is not a threat and masks are no longer mandatory, it can analyse the air and advise whether you need to wear it. The company says it will make it available in selected markets for $149.99 (R2,270,68) by February 2021

AirPop isn’t the only company fusing hi-tech elements into masks. Razer, a gaming company typically known for gaming hardware such as laptops, controllers, monitors and other gaming accessories, also threw its hat into the smart-mask ring at CES with Project Hazel, which they call “the world’s smartest mask”.

Is that a party on your face?

Before even looking at the hi-tech features the most striking thing about the mask is its design, which wouldn’t be entirely out of place at a 1990s rave. Promoted as a way to better improve social interaction while wearing a mask, Project Hazel has a transparent front so you can see the wearer’s lips.  It also has a “low light mode” where the mask’s interior automatically lights up in customisable colours when it’s dark, so that the mouth is still visible. To further improve masked communication it has a microphone and amplifier to “ensure your speech isn’t muffled even when you’re masked up”.

It also has an “active ventilation” feature, which refers to the detachable and rechargeable ventilator on the side of the mask. According to Razer, the “ventilator regulates airflow and is capable of filtering at least 95% of airborne particles”. It comes with a charging case that has a UV light interior to kill bacteria and viruses as the mask charges. Unlike the other masks mentioned here, this one is still in the concept stage and Razer is yet to announce a release date. 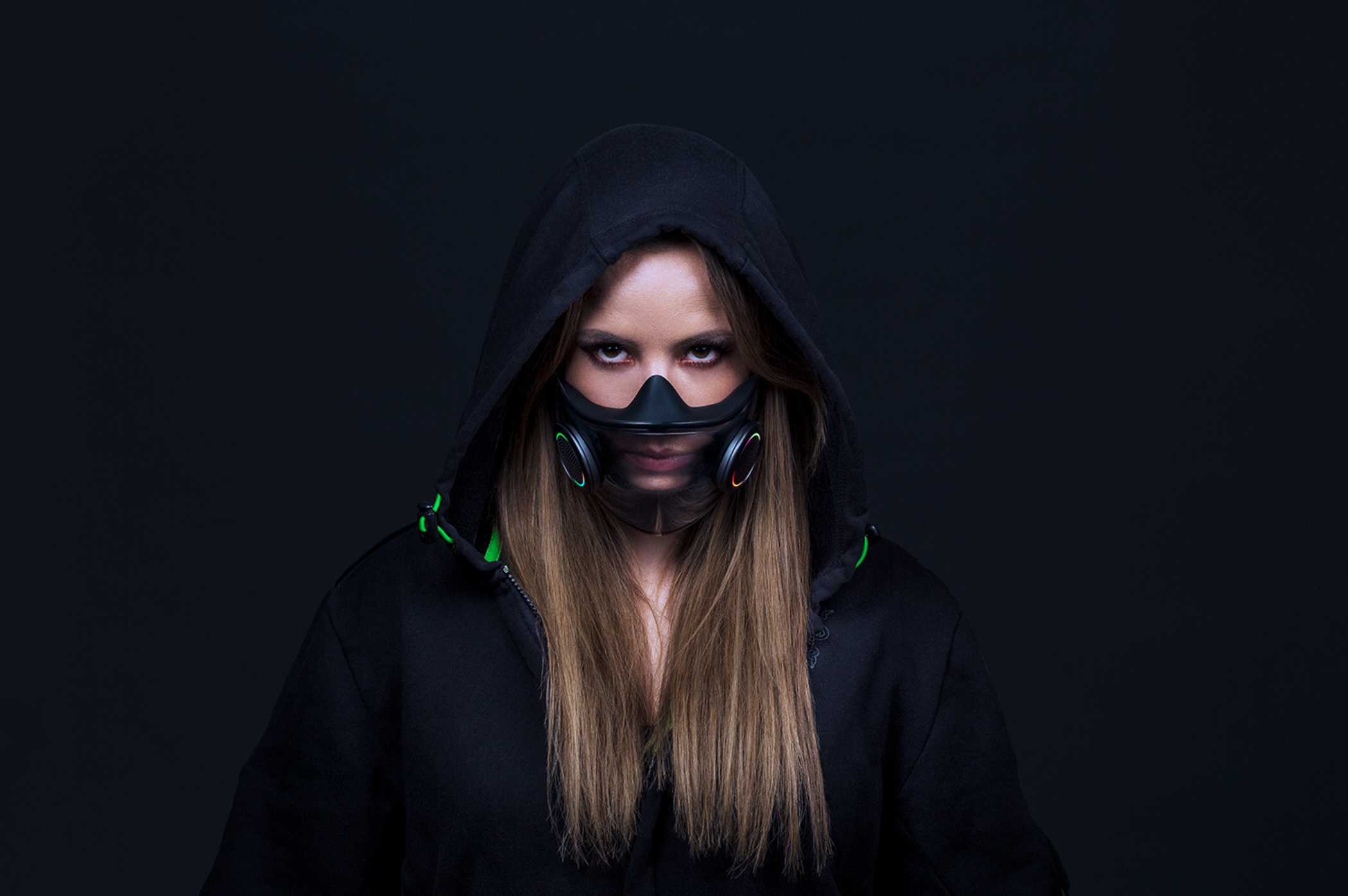 However, that doesn’t mean there are no other options to improve on that muffled speech. All rise for the MaskFone.

Call me on my mask

It’s not exactly an amplifier-microphone combo, but in addition to the N95 filters behind the fabric the MaskFone comes with an integrated microphone and noise-cancelling earbuds so that you can chat on the phone without removing your mask. There are volume controls and a play button on the side of the mask, which also comes with an app that boosts your voice and interacts with digital assistants such as Alexa, Siri and Google assistant

As illustrated by companies such as Airpop, which has been in the personal clean air business since before the pandemic, air pollutants are still very much a concern in certain parts of the world, and will continue long after Covid. Masks will continue to be the preferred method for individual protection. Enter LG’s PuriCare Wearable Air Purifier.

Bane, is that you?

Revealed in August 2020 and launched in selected markets in November, LG’s wearable air purifier features “dual fans and [a] patented respiratory sensor [that] detects the cycle and volume of the wearer’s breath and adjusts the dual three-speed fans accordingly. The fans automatically speed up to assist air intake and slow down to reduce resistance when exhaling to make breathing effortless.”

It also comes with germ-killing UV-LED lights and a case that can charge the mask and send notifications to LG’s ThinQ to let users know when to change the filters. It has a battery that LG claims “offers up to eight hours of operation in low mode and two hours on high”. Get it online for HK$1,180.00 (2,302,23). DM/ML