Chaos, queues, anger and allegations of bribery at the... 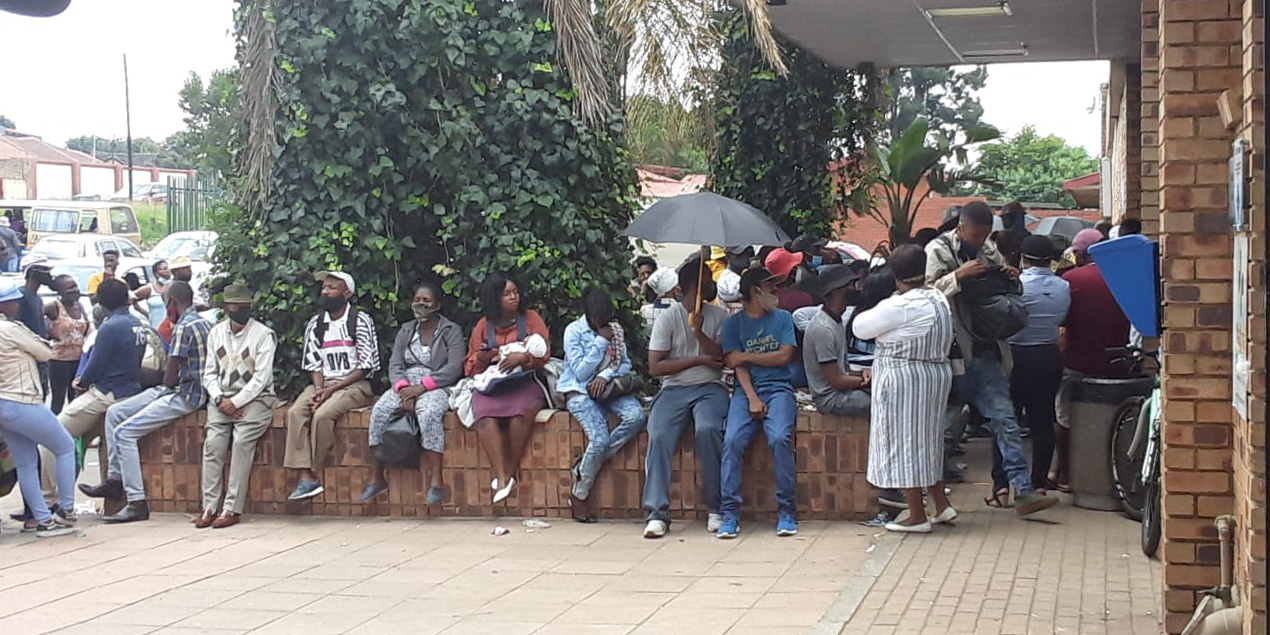 Orlando Home Affairs visitors in Soweto sit exhausted near the entrance to the offices on Tuesday, 19 January 2021. (Photo: Bheki Simelane)

Angry visitors to the Orlando Home Affairs in Soweto have accused staff of incompetence, bribery and a bad attitude.

“It’s not my intention to hit any man or woman, but today I will hit someone even if they are my mother or dead father’s age or older.”

An irate young man said this at the Orlando Home Affairs Department in Orlando after accusing officials of stalling in issuing his ID.

He was not the only aggrieved visitor at the Home Affairs offices on Tuesday, 19 January. Over the past few weeks Daily Maverick has received complaints from members of the public who claimed that the Orlando Home Affairs staff were incompetent, accepted bribes and had a bad attitude.

When Daily Maverick visited the offices at 6am on Tuesday, many people were already queueing. By 9am, hundreds of people were queueing.

Orphaned siblings Nokuthula Mathanda (33) and her sister arrived just before 6am in an attempt to obtain an ID document. The siblings said they had been trying for a long time without success. Mathanda said her younger sister could not further her studies without an ID. Mathanda said their mother was a drug addict who never saw the importance of owning an ID and that this was affecting her younger sister.

The siblings from Mzimhlophe said that after countless visits to the Home Affairs office, they were finally told last year to go for a paternity test to establish their relation to their deceased mother.

Three other people who spoke to Daily Maverick said there were creative means to get one ahead of the queue at a cost of at least R100.

“A lady who was behind me last week heard about the creative means and moved to the front of the queue. In one or two minutes she was let in. In a few more minutes, she left carrying her child’s birth certificate,” said one.

Nosipho Pakathi said, “I was at the Chris Hani Baragwanath Hospital earlier today but they told me to come here because my child was only a month and a few weeks old.”

“You can’t have an attitude when you’re working with so many people. Are you going to be impatient with everyone needing your assistance?” asked one woman in the queue.

During Daily Maverick’s time at the office, only one group of about 10 was let in. A crowd of people became fed up after midday and moved to the entrance to demand answers as to why there seemed to be no movement in the queues.

While this was happening, a man silently elbowed his way to the front of the crowd. He had two things in his hands: car keys and a piece of paper. As soon as he appeared in the front of the crowd, another man suddenly showed up from the other side of the gate. They whispered in each other’s ears and the visitor handed over the white piece of paper.

Tucked in it was a R100 note. The man on the other side received it and disappeared back inside the offices.

“Criminals,” shouted a few people who witnessed the exchange. They spread the word about what they had just seen. This angered the crowd even more, and they refused to leave the entrance area.

“They will come with the same excuse that they are offline. There is nothing they enjoy more than giving us that rubbish every time,” a woman in the crowd said after queueing from 7am to 1pm.

The crowd demanded to know from the security guard why people behind them in the queues had been called in ahead of them. The security guard said they were those who could not be assisted the previous day and had been told by officials to return.

Elen Masinga (55), who queued patiently for more than six hours, said she had arrived at 6am to register a birth certificate for her child.

The crowd was angered by an announcement which was made by a Home Affairs official at 11.44am. “We have a problem. A mentally unstable visitor has damaged three of our computers,” he said.

He said that as a result people who had come for birth certificates would experience delays because only two computers were working.

“They are not mentally unstable. They damaged the computers out of anger and frustration. Don’t come here and tell us they are mentally disturbed. They are angered by your inefficiency. They are disgusted by your service. You are insulting our intelligence,” one person shouted.

“Please be patient with us when things get slower,” added the official.

“I’m from Emmerdale, bro. I take five taxis to get here. And each time I come here, I cannot get my ID. I used my last R100 to come here. That R100 could have been used for transport fees to work for two days,” said Kaylen Lester, who had arrived just before 8am.

Lester pointed to two guys whom he said he had befriended in the queues over the past few weeks during his visits to the Home Affairs offices.

“I came to collect my ID which I registered for on 23 December,” said Thembinkosi Shezi. The 30-year-old had also arrived at 6am.

Observing Covid-19 protocols such as social distancing was not one of the people’s priorities. Some did wear their masks in the approved fashion, while others wore theirs below the chin, and yet others were maskless.

Meanwhile, the crowd continued to threaten officials with violence, with a group of women contemplating smashing the glass door and forcing their way in. DM