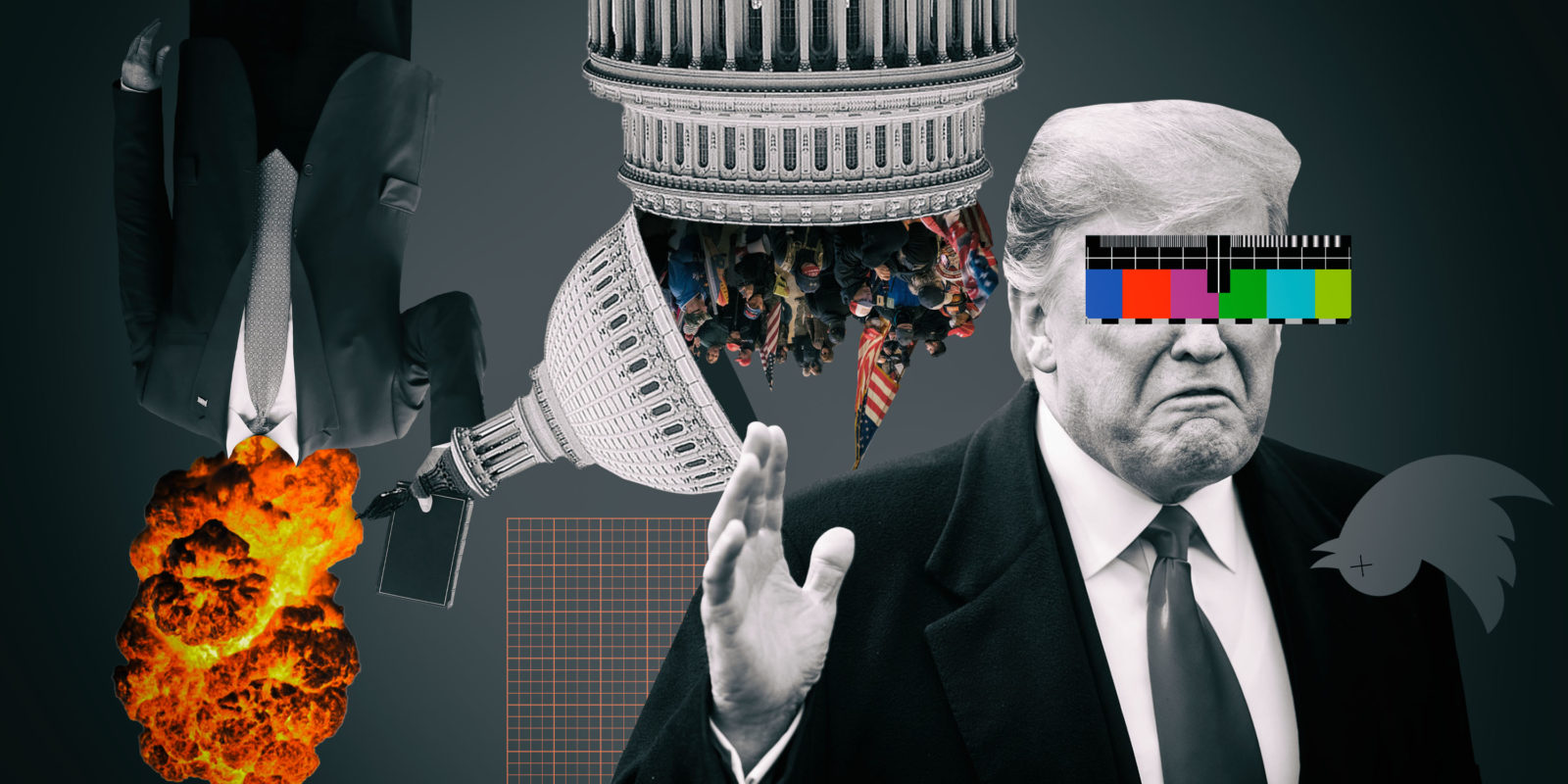 The first warning fire-bell should have rung when we found out that the Trumps had become the first family in the White House not to have a pet. We should have known better: we, the world, would be their pet.

On Wednesday, 20 January, Joe Biden is inaugurated as the 46th president of the United States of America. I am writing this 24 hours before that event. You might be reading this a few hours after the event. Or you may not. In my next few hours Donald Trump is still the 45th president of the USA. He is still the Commander-in-Chief, still the most powerful man on Earth. He has the code to unleash a nuclear farewell cloud and take us all with him. Happily, if you do read this, it means that he didn’t do that!

The “that!” used to be a Hollywood blockbuster and a fantasy countlessly repeated in US films. The end of the world at the hands of a madman. Now those movies all look like a death wish that might even come true, and yet none of them are as chillingly toxic as what the world has witnessed in the last two weeks. Maybe the last two months? Actually the last four years.

And yet, then again, no – every democracy deserves the government it gets. Corruption and chaos have always been part of the process, not only in the US. Because the Yankee Eagle attracted world attention so easily, we all trusted who they would trust to become president. General Eisenhower made way for a young Catholic. Via Dallas, Texas, JFK made way for a local warlord. New president LBJ unexpectedly opened the door for civil rights, after which peanut farmer Jimmy Carter popped in for one term and left without trying to storm the Capitol. He was laughed out of office by an old Hollywood movie star’s wife, Nancy, who read the tea leaves and made hubby Ronnie top of that ruling class.

The political Cosa Nostra families of Clinton and Bush then took turns in cutting a nation’s foot to fit their designer shoes. Then 9/11 happened. Bang. The musical comedy of American polities lost its Technicolor, its songs and dances, its moral high ground and peeled off the good guy Mr-Smith-goes-to-Hollywood mask to expose another fabricated good guy Batman-bombs-Baghdad façade. Maybe they both were made in Wall Street. A young magician of Madiba colour and Mandela style had to squeeze the square peg of corruption into the round hole of financial collapse. Then, enter the Joker who’s spent a lifetime planning to take over the world, using a golden escalator as his first trump card.

It is seldom that political reality can compete with political fiction. The West Wing is now watched on television reruns through tearful eyes and with aching hearts of nostalgia.

The Apprentice being cooked up in a tower on Fifth Avenue was ready to Twitter himself as a square peg of historical aberration and pollute the round hole of governmental tradition. Why is everyone now conveniently surprised at the success of Trumpelism? They knew exactly what they were getting. The genius of Donald Trump lies in the preaching of his truth, his whole truth, which is nothing but lies. He fabricates because he believes. He also delivers with such flair and passion, that to more than 72 million voters, it just became too good not to be true.

The 45th president of the USA’s vile treatment of women makes Convict Weinstein look weak. So why did so many women vote for Trump? Were they not disgusted by his sexist onslaughts, many of them captured on tape, in word and deed, and analysed in print?

See what happened when 46% of the American voters didn’t use their weapon of choice in the 2016 election? They deserved what they got. They nearly got him again on 3 November last year. The Donald had prepared for that months before, already then describing the upcoming election as fraudulent and stating over and over that, “the only reason we [I] will lose, is because the election is rigged”. More than 72 million Americans voted for Trump. Really? Maybe 10% of them came out of the basket of deplorables, the apt description of his followers that might have lost Hillary Clinton her 2016 election. The majority votes for the Republican Party were by voters who wanted it to stay in power. If Miss Piggy had stood, they would have voted for her.

Who will follow? Trump has set his footsteps in the congealed blood of his actions. There are enough ambitious hopefuls who will follow in the path of his disruption. With the charisma and skill of a Clinton and an Obama, a new leader will emerge not to emulate the orange Svengali but outdo him in horror.

Personally, I mainly resent Trump for being better at doing himself than I can be. He has also disarmed political satire. The international cartoons about him are priceless, but instantly dated because within a day, the real Trump delivers an even better punchline. His family remains a cross between the Stepford Wives and the guest list at Eva Braun’s dinner party. While the head of the Trump dynasty now is flipping through TV channels in a blind tantrum to find his fading public image, his Muppet-offspring are panic-stricken about their fading futures. Can they still depend on their above-the-law brand to get the money rolling in? A Netflix series called The Trumped-Up Losers will enrich our lives with the blonde daughter and her two brothers, waxworks fresh from the dumping room of Madame Tussauds.

The first warning fire-bell should have rung when we found out that the Trumps had become the first family in the White House not to have a pet. We should have known better: we, the world, would be their pet. Let us now wag our tails and look forward to next week, seeing the former Commander-in-Chief on the lawns of Mar-a-Lago in his bathrobe and slippers, screaming abuse at the passing traffic, because no one is interested in a one-term loser, who tried to turn his own country into a “shithole” as he described the lands of Mugabe et al.

Who will follow? Trump has set his footsteps in the congealed blood of his actions. There are enough ambitious hopefuls who will follow in the path of his disruption. With the charisma and skill of a Clinton and an Obama, a new leader will emerge not to emulate the orange Svengali but outdo him in horror.

He, or she, might get a landslide for a panicked public.

Meanwhile, Trump will not disappear in a puff of smog. He will find his way centre stage, maybe as the robbed leader of a government-in-exile in the Independent Homeland Republic of Florida-on-Trump, not the first American Bantustan. Around the crap tables of Mar-a-Lago, he can vent his crap. On the deserted golf courses of the shunning world, he can kick balls viciously and be the champion. The greatest show on Earth. Until you flip the channel.

The only way to keep Donald J Trump in his place, furious and foaming at the mouth, little hands flailing, is to laugh at him. Did he even have C-19? Upstaging science and truth and being Superman without having to change in a telephone booth? Threatening the medical experts with a Twitter exposure unless they played along? Then, for the next six days leading up the election, he was like a teenage Madonna, doing two huge rallies a day, flying in on Air Force One, the ultimate backdrop, and doing flip-flops and handstands to prove that his 70-plus was the new 35-minus.

Let’s face it, whatever he did, was more entertaining than the real Life of Biden. Most of the undecided voters watching this talent show with amusement probably couldn’t help applauding. “Look at that old fart! He deserves my vote just for being so crazy!” Tick the fart-box; tick the crazy bracket. Now look in the mirror.

“Hi South Africa! 300,000 of us have been arrested for breaching the lockdown rules. But nobody has been arrested for State Capture. Stand by for needle capture! And wear a mask! Keep your distance! Wash your hands! Teach your kids maths at home! No alcohol allowed! Stand by for your load shed. Oh yes, and be safe!”

So thanks for the laughs, Donald. May all our dreams also come true. DM

Now is the winter of our Covid discontent – but can a bright new spring be on the horizon?

How to Start a Side Hustle: A playbook for a new economy