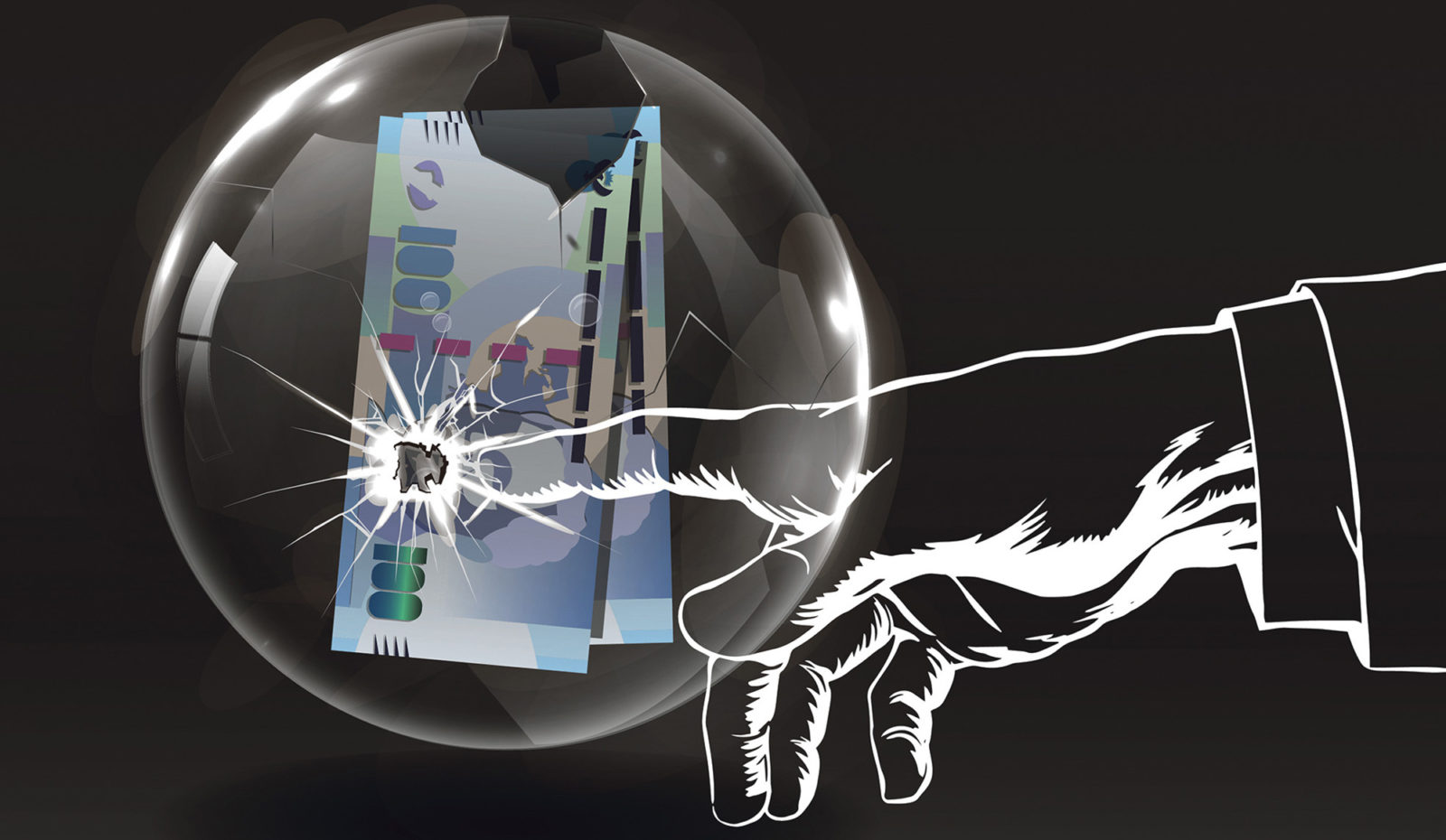 South Africa’s fragile economy is already off to a stumbling start in 2021. The economy began 2020 mired in recession and the hard lockdown imposed in late March triggered a contraction of 51% on an annualised basis in the second quarter.

The relaxation of lockdown regulations saw a 66% rebound in the third quarter (Q3), but a lot of ground remains lost. Estimates generally peg the 2020 contraction at between 8% and 10%. With renewed lockdown measures, the return of load shedding, mounting debt and shattered confidence, the outlook for 2021, with a few exceptions, is bleak.

Here are five key factors to look out for this year that will have an impact on the economy, your bank account and your best-laid plans:

Covid-19 has usurped Eskom’s role as the chief risk to the economy. Eskom would have had to implode to pull off a 51% gross domestic product (GDP) collapse on its own.

London-based consultancy Capital Economics reckons the renewed lockdown measures imposed late in December shut down about 20% of the economy, shaving 0.5% of potential growth off this year. If these get renewed or if more stringent regulations are brought back, the throttling of the economy could herald a Q1 contraction.

Although many of the measures are well-intended, with the saving of lives their ultimate goal, they will add to the growing ranks of the unemployed. Workers in the hospitality sector will be especially hard-hit. The unemployment rate is more than 40% based on the widest definition used. Fewer people working means more households will be deprived of income, leading to less spending, with ripple effects throughout the economy. The Liquor Traders Formation, which represents tavern owners, says the ban on alcohol sales threatens 250,000 jobs in the industry, while South African Breweries maintains that the previous two bans cost 165,000 jobs across the value chain.

A proper vaccine rollout is the potential game-changer. The government’s aim is to vaccinate more than 40 million people this year but many critics do not believe this is plausible. Yet it is affordable. Several Wits academics, in a piece published this week, estimated the costs for a proper rollout at between R8,6-billion and R16-billion – a small price to pay considering the lives and livelihoods that will be saved. And Thursday’s announcement that SA will receive one million doses this month from India is a promising start.

The World Bank forecasts the global economy will grow 4% this year, but a delayed vaccine rollout could slash that to 1.6%. Its projection for SA is 3.3% growth but, if the vaccine project is fumbled, it is likely even that modest rate will not be obtained.

The South African Reserve Bank (SARB) in 2020 slashed its repo rate by 300 basis points to 3.5%, bringing the prime lending rate for consumers to 7%. The economy’s stuttering start to 2021 could give it room to make an additional cut of 25 basis points when its Monetary Policy Committee (MPC) meets later this month.

Inflation remains well-contained. The latest CPI reading for November was 3.2%, near the bottom of the SARB’s mandated 3% to 6% target range, and there is little in the way of price or demand pressures.

Governor Lesetja Kganyago is a steady hand at the helm, and the SARB is hardly going to crank up the presses to print money. The bank did embark on a bond-buying programme last year in the secondary market, in a bid to stabilise and inject liquidity into financial markets. The International Monetary Fund says 18 emerging market central banks took such initiatives, and the results were largely positive. In the case of the SARB, the programme was limited, but it helped bring bond yields down. Mission largely accomplished, it is not clear if the SARB will take similar action this year.

South Africa is deeply exposed to commodity prices on two fronts: oil, which is imported, and metals and minerals, which are crucial exports.

Oil prices this week rose above $50 a barrel for the first time since February 2020, with gains supported by a surprise output cut by Saudi Arabia. Prices collapsed and it remains to be seen whether the rally can be sustained. In 2020, PwC forecast that global oil demand would “never again exceed 2019 levels”, as the pandemic accelerates the transition to cleaner energy sources. The price of oil at the pumps is a key cost for consumers and business alike, so this is a space to watch.

Prices for the stuff that South Africa pulls out of the ground fared much better last year. Gold rose 25% in dollar terms and vaulted to record highs above $2,000 an ounce at one point, boosted by its status as a safe haven in times of uncertainty or global political turbulence. There will be uncertainty and turbulence galore in 2021 – behold the events in Washington last week – so the gold prices should remain elevated.

Platinum’s price rose 11% in 2020 and palladium’s 28%. Palladium’s fortunes have been lifted by its role as a catalyst for petrol engines, which are coming into favour in key markets over diesel engines because of emissions regulations. Maintaining these rallies will hinge on a number of things, including the availability of above-ground stocks. Mining companies outshone other sectors on the JSE last year and could have another bumper year in 2021.

Beyond the JSE, the mining sector’s performance is important for SA’s wider economy. According to the Minerals Council South Africa, the sector accounted for 8.1% of GDP in 2019, with a direct contribution of R361-billion. Minerals export sales in 2019 amounted to almost R350-billion, and employee earnings were R136-billion. Much of this contribution hinges on prices, and export earnings in turn can help support the value of the rand.

Rising debt levels could make or break this economy. Finance Minister Tito Mboweni’s Budget speech in February will be closely scrutinised to see if there is finally a credible plan to curtail the monster. In October, Mboweni’s medium-term budget outlook made for painful reading. The budget deficit is 15.7% of GDP and gross debt is 81.8% of GDP.

The challenges are many and massive. They include the public sector wage bill. A Labour Court ruling in December said the government did not have to honour above-inflation wage hikes for public servants, agreed in 2018, but unions this week said they were taking the issue to the Constitutional Court. Downgrades of SA’s credit rating have made the task of cutting debt even tougher, and the descent into the deeper reaches of junk status is almost certainly not over. That makes South African debt a riskier option, so lenders will demand a steeper rate of return to part with their capital. And if economic growth does not meet its tepid expectations this year, the debt-to-GDP ratio will rise even faster, while anticipated revenues will fall short.

Load shedding is back, even if the 2021 variant is (initially) being done during the unproductive nocturnal hours. Eskom under CEO André de Ruyter has laid out a “reliability maintenance programme” and he has put underperforming managers and staff on notice to shape up or ship out. The separation of Eskom into three separate units – generation, transmission and distribution – appears to be forging ahead.

Still, if there is one SOE where things can go wrong with major consequences, it’s Eskom. Broken conveyor belts are at least understandable, but after the debacles of “wet coal” and “stage six load shedding”, what next? Will the coal get too dry and ignite? Will load shedding stages reach double digits? And speaking of digits, Eskom’s debt is close to the half a trillion rand mark – that’s a dozen digits.

Meanwhile, the government, notably the Department of Mineral Resources and Energy, seems to be in no hurry to get private producers, self-generation projects and renewables off the ground to take the strain off the grid. The bottom line is that so long as load shedding persists, the economy has little prospect of decent growth. BM/DM

Public Investment Corporation not inviting anyone else to party

Africa’s dearth of statistics a major impediment to policymaking