The idiots have saved the world, this time

The idiots have saved the world, this time 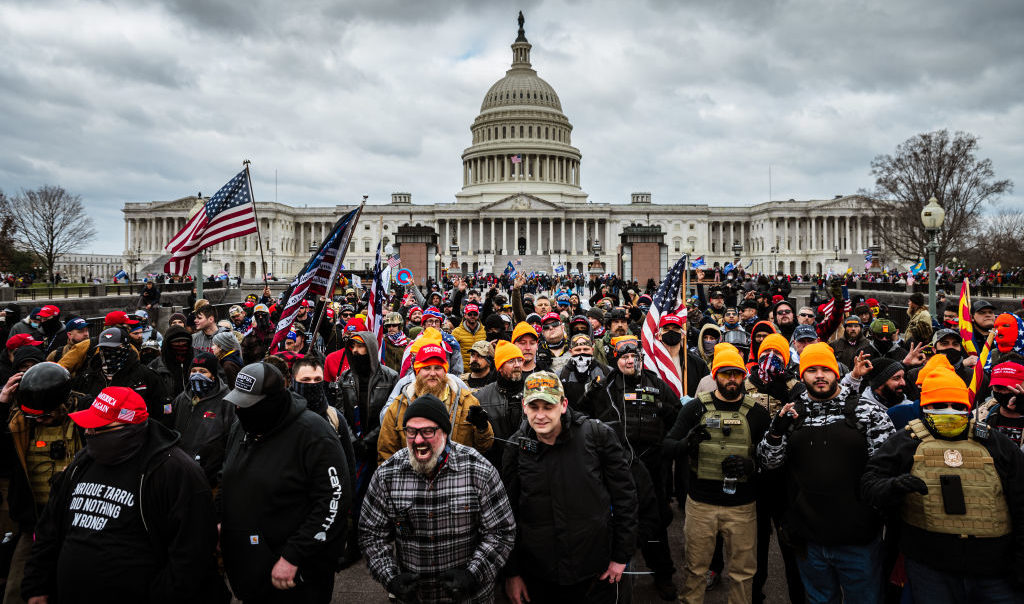 Pro-Trump protesters gather in front of the US Capitol building on 6 January 2021 in Washington, DC. A pro-Trump mob stormed the Capitol, breaking windows and clashing with police officers. Trump supporters gathered in the nation's capital to protest against the ratification of President-elect Joe Biden's Electoral College victory over President Trump in the 2020 election. (Photo: Jon Cherry / Getty Images)

Did they actually think that the power of the state is acquired by sitting in a specific chair and that sitting in the Senate President’s chair (Mike Pence, still) and briefly occupying Nancy Pelosi’s office would make Trump president for life?

Just six days into 2021, it was a show destined to become the year’s greatest ratings hit – the storming of the US Capitol building by Trump-aligned “patriots” and other assorted misfits. As sentient beings around the world watched the heavily unsurprising and yet still shocking opening act of the last two weeks of Trump, I actually felt rather encouraged: it seemed Trump fever had reached its peak and was about to break.

Was it a bargain-basement violent event? Yes. Anti-democratic? Indeed. Reckless? Hell, yes! But the most precise word for it: stupid. God bless incompetent idiots, for they will save the world from better-organised conspiracies that would cause lasting damage.

Did they believe they could stop anything? Seems so. Did they think Trump would be at the front, leading the charge, driving the sharp end of his Confederate flag into the heart of the “libtard” democracy? Anything’s possible.

Did they actually think that the power of the state is acquired by sitting in a specific chair and that sitting in the Senate President’s chair (Mike Pence, still) and briefly occupying Nancy Pelosi’s office would make Trump president for life? Possibly. (Elizabeth from Knoxville, Tennessee, certainly did assume they were starting a revolution.)

Their violent-but-dumb insurgency has shaken the rest of America and helped at least half of the GOP to snap out of the mental condition otherwise known as The Fear of Trump.

And that’s what makes me hopeful. Often in history, a crazy and downright inhumane set of ideas gets developed, and perfected, by equally crazy and downright criminal con artists who then infect nations with a fever so strong that only genuinely horrible events can break it. In the early 20th century, nationalist and later fascist fevers gripped the world and the cycle of madness was broken only after a terrifying toll of 100 million deaths over two world wars, coupled with a near-total destruction of most economies involved.

The Yugoslavian nationalist fever of the 1980s and the 1990s, something I witnessed, ended only after a decade of civil wars that could only be described as soul-destroying, with millions of people displaced, hundreds of thousands dead and the dreams of millions shattered. Three decades and countless sufferings later, though some still cling to their old nationalism, most of the people have finally moved on, exhausted.

Ever since 16 July 2015, when Trump descended on his escalator to vomit his own brand of hatred to the cheering rent-a-crowd gathered on that day (they were paid $50 and a sandwich), I wondered what kind of price the US would have to pay for the then still-incoming sins of embracing Trump and Trumpism.

(Side note: I went up the same escalator in November 2018 – it is as fake and tacky as Trump’s hair, and leads to what must be the saddest Starbucks in this quadrant of the galaxy.)

As Trump shattered everything and Ctrl-Alt-Del-eted the world for America, he ejected a massive amount of hatred pollutants into the world’s mainstream. Returns were prolific and powerful: white supremacists raged in Charlottesville and everywhere, soon-to-be-drilled pristine areas of Alaska, 350,000 unnecessary Covid-19 deaths, years of climate change fight lost, shattered relations with allies and warm rapport with the globe’s dictators. And lies, so many lies. Alternative facts too.

When Trump refused to commit to a peaceful transfer of power, the writing was on the wall. The only uncertainty left was how much his final performance would cost this damaged nation, and the world, before it finally woke up.

Most Americans are horrified and angry now, and even some of the prominent GOP politicians are pulling away from Trump, fast. What many of them were afraid of, splitting the party or being primaried by Trump, suddenly feels less threatening. (The GOP does appear to be in great danger of splitting, and it is their own fault.)

But here’s what’s troubling: Trump’s forces, if better organised, could have inflicted far greater damage. Competent and well-organised players can destroy the world. (The insurgents were neither organised nor competent, thank God.)

Every populism is a national fever. Breaking it was the best parting gift that Trump and his army could have given to his country. It didn’t cost millions of lives, and he didn’t succeed in shattering the dreams of billions.

Next time, however, another autocrat will come America’s way, and he/she could be much more competent while equally attractive to the nationalist base. One can only shudder to think of the damage next time it happens. And it will. DM168