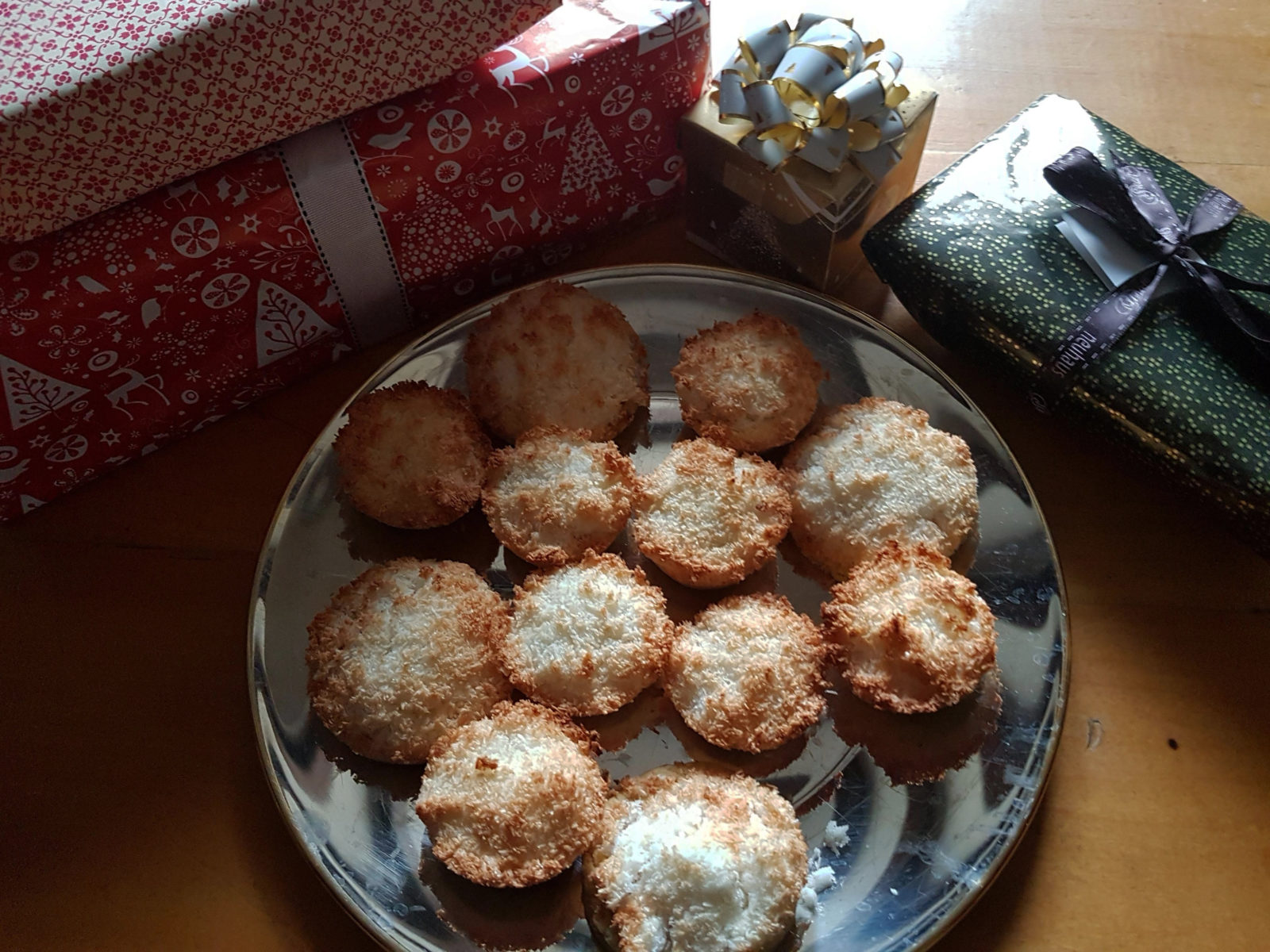 Usually I am not a big baker. Not even a pandemic could entice me to start producing banana breads or rusks on a regular basis, like so many people who’d hardly known how to switch on an oven before lockdown started. But Christmas makes all resistance crumble.

In that extraordinary year of 2020 we all did extraordinary things. I, for instance, channelled my long-dead mother and my Afrikaans oumas and generations of female ancestors to tackle some serious Christmas baking.

In the days leading up to the previous Christmas, in 2019, I had done quite a bit of baking too. My partner and I, together with our four grown-up children, had decided to sidestep the annual consumer madness of Christmas by offering one another mainly homemade or recycled gifts. So I baked a few batches of South African crunchies and Scottish shortbread, and even attempted French Florentine biscuits, to present as gifts along with a lot of previously loved books.

This Christmas, of course, we had another reason to avoid crowded shops and malls – a virus we had never even heard of a year ago – so we simply continued on the anti-consumer path we had chosen the previous year. Once again I produced home-baked gifts, but this time the cookies and biscuits were all of South African origin.

For the first time in my life, I baked those traditional South African cookies and biscuits that the women in my family had always baked for the large family gatherings and the many children who were constantly hungry from playing and swimming all day long during sunny Christmas holidays. The spicy soetkoekies and old-fashioned ginger biscuits and apricot cookies I remember from my own childhood.

The fact that there would be no large gathering of family due to Covid-19 restrictions in France – and definitely no sun either – did not deter me.

I suppose I was desperate to recreate a semblance of nostalgic normality in this abnormal “festive season”. I didn’t question my motives too much; I simply tied on my apron, gathered the oldest recipe books (some with handwritten notes by my dear mother stuffed between the pages) and started sifting flour.

I got so carried away that I even baked Hertzoggies. To my delight the French-speakers in the house, who had no idea how to pronounce this quaint name, immediately loved the taste. They loved it even more when I told them the story behind the name.

Cass Abrahams, one of the culinary doyennes of the Bo-Kaap, tells it in her own way in the cookbook A Life with Food, in a chapter appropriately titled Pastries and Politics:

When JBM Hertzog was in running for the position of Prime Minister of South Africa in 1935, only white men had the right to vote. He said that if he were elected, he would give white women and Cape coloureds the right to vote. The Malay community was extremely excited about this prospect. It was only a matter of time before a small sweet treat started appearing on the tables of the Bo-Kaap: Hertzoggies.

Apparently these tartlets were initially baked with a dollop of apple jelly in the middle (in those days apples were abundant and inexpensive in the Cape), but the apple jelly has long since been replaced by apricot jam, often straight from a store-bought tin. What has remained unchanged through the decades is the meringue mixture of egg white, sugar and coconut that covers the sweetheart of the tartlet, in honour of “General Hertzog’s pale skin and gentle heart”.

Of course, the general did not keep his promise. White women got the vote, but the rest of the population were forgotten. And in the Bo-Kaap, “our frustration boiled over in our ovens”. This led to the creation of another, harder biscuit baked with less butter and sugar, the Twiegevrietjie (little two-face), which has one half decorated with pink icing sugar and the other half with brown chocolate icing sugar.

I have always been fascinated by stories of how famous dishes were created and named – from the sisters Tatin’s upside-down apple tart to those little orange-flavoured crêpes, named after a certain Suzette, that are so spectacularly set alight before being served – and the uniquely South African story of Hertzoggies and Twiegevrietjies has a special place in my heart.

But because I live in France, the story of my own Christmas Hertzoggies got a foreign twist in the tail.

Instead of the smooth apricot jam in a tin that my mother would have used for her Hertzoggies, I filled mine with a chunkier jam, home-made from fruit harvested in a French orchard. And of course I used eggs laid by French hens, butter from French cows, flour made from European wheat. In fact, the only truly South African ingredient was the baking powder from that iconic little red tin that I brought home with me from a pre-Covid visit to my birth country.

And since I’m not all that keen on baking, I didn’t have the right size baking trays in my French kitchen, which meant that half of my Hertzoggies turned out too big and flat, and the other half too small and deep. So not only did they taste vaguely French, but they certainly didn’t look the way I remembered them.

I didn’t have much time for studying my Hertzoggies, though, because my family finished the whole batch within a few hours – before I could even save some to wrap up as Christmas gifts. My daughter adored the apricot-coconut-meringue combination and promptly declared this better than any French macaron. Which inevitably led to some jokes about our French president with a surname that sounds almost like a biscuit – and before you knew it, we had a name for our Frenchified version of a traditional Afrikaans tartlet with a political history: “Macrontjies!”

Not an easy word for a French tongue to pronounce either, but once I told the Frenchies that the tjies at the end of Macrontjies sounded the same as the French word for “who” (qui), they got the drift. And at least it’s easier than the rolling “r” and the guttural double “g” in Hertzoggies.

Even my gemmerkoekies acquired a multicultural appearance. I relied on my ouma’s trusted recipe for small round ginger biscuits, but I used cookie cutters to shape the dough into stars and hearts and little men. My gran’s overflowing cookie jars never contained decorated gingerbread men; they belong to European Christmas traditions. Apparently the first gingerbread men were created in Queen Elizabeth I’s court in the 16th century, each one resembling a guest at her table. And it was the fairytale house in the Grimm brothers’ Hansel and Gretel that inspired German bakers in the early 19th century to start producing elaborately decorated gingerbread houses. 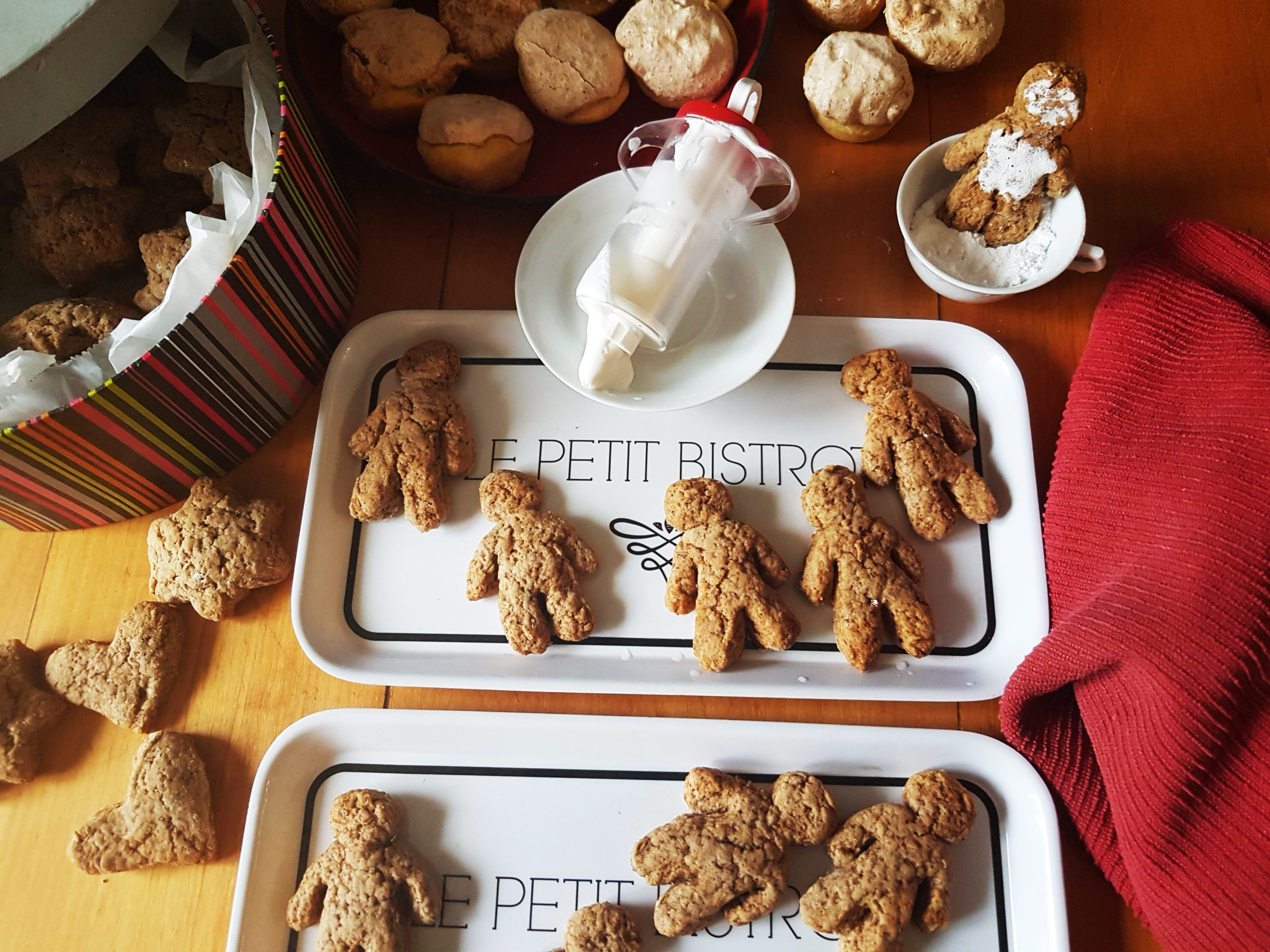 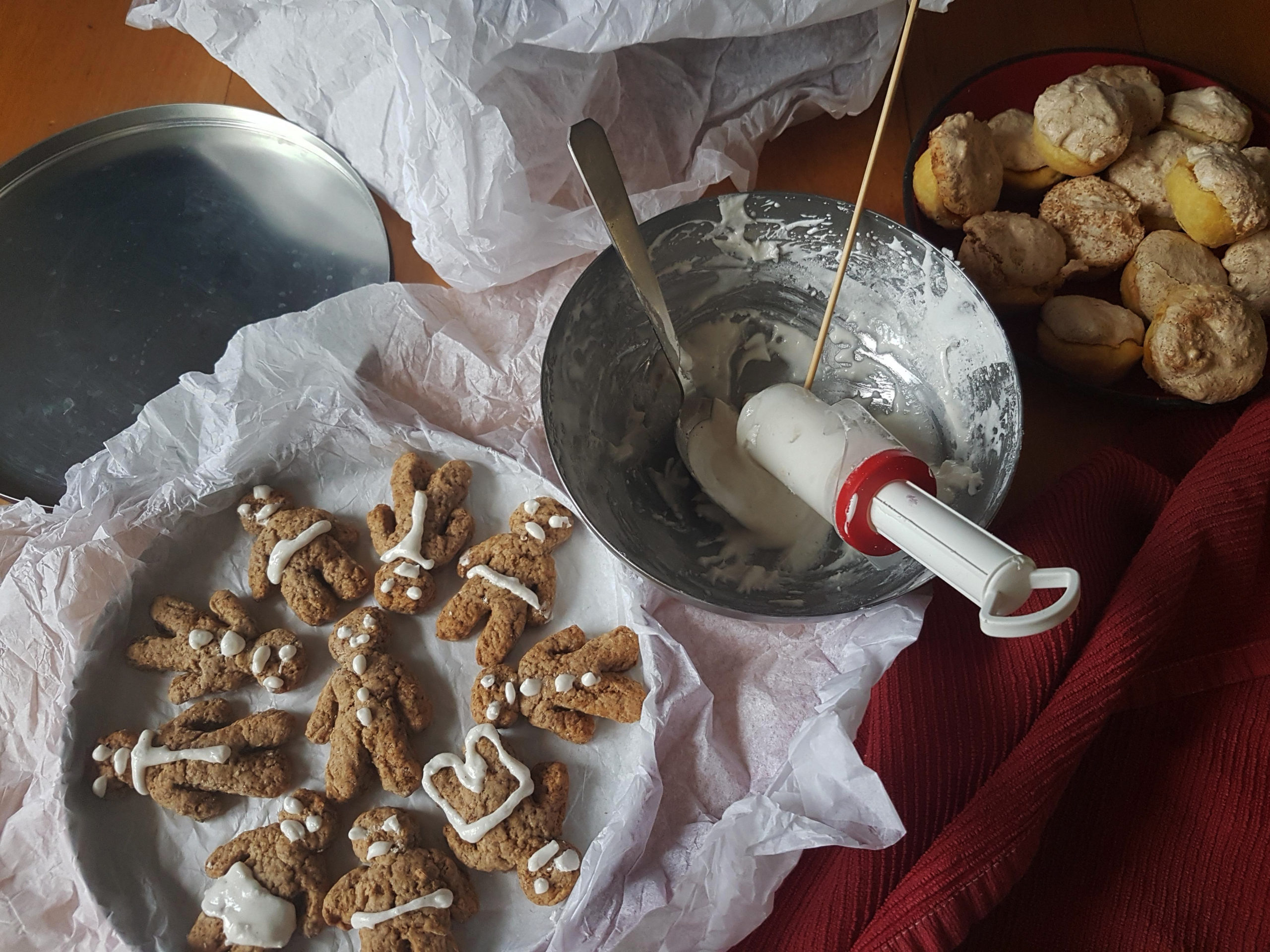 My own gingerbread men were decorated very simply and rather amateurishly with white icing sugar. But the proof of the pudding is in the eating, after all, and the day after Christmas they had all been eaten. I tried to explain to the Frenchies that the whole point of traditional gemmerkoekies was that they could be stored for weeks to last throughout the festive season. They looked at me in astonishment. Why would anyone want to store baked goods for weeks if they could be eaten fresh from the oven?

And I realised, once again, that there are parts of my komvandaan that I would never be able to explain to my children. They live in a country where there is almost always a bakery within walking distance, where they could buy delicious fresh pastries every day. How can they understand that in the South Africa of my youth we were often very far from bakeries, or any other shops, especially during Christmas holidays on farms and at the seaside?

But I’ll continue my multicultural experiments, in life as in my kitchen. So here’s to Hertzoggies becoming Macrontjies and gemmerkoekies changing into gingerbread men. Or, as my partner always exclaims when he adds a fat slice of Camembert cheese to a perfectly presentable English breakfast: “Melangeons les cultures!” Let us mix cultures, indeed. DM/TGIFood