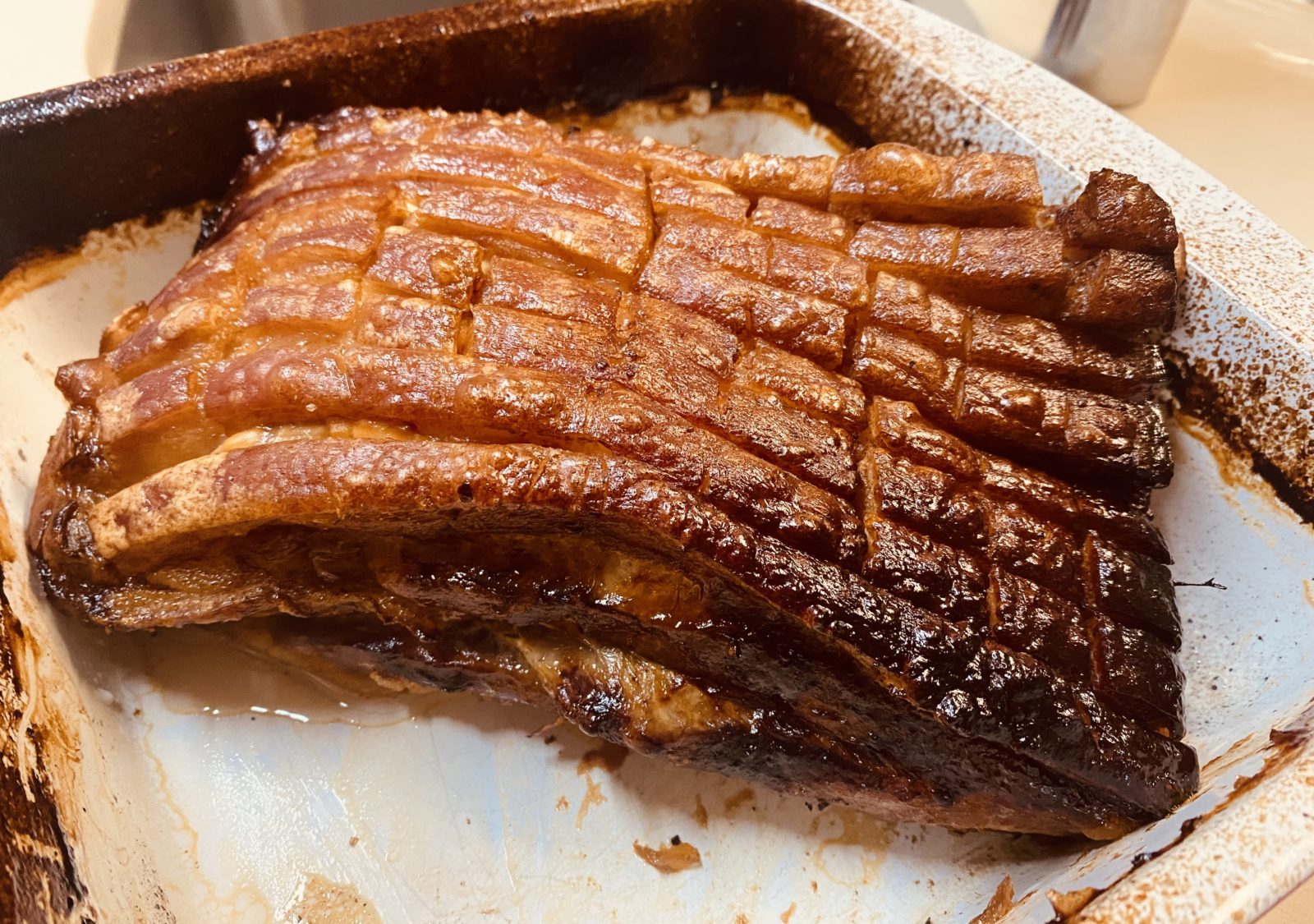 One thing that defies even the best of cooks to get just right is pork crackling. That, and the pork flesh to which it is attached being beautifully moist and succulent once the crackling is perfectly crackly. One element seems to fight the other.

No one I know makes better pork belly than my very clever son-in-law Neal Derman. (Of course he’s very clever, he had the good sense to marry my daughter Rebecca.) When Neal cooks pork belly, pork and crackling aficionados sit up and take notice. The meat is not that dry thing you expect when the crackling is just as crackly as you hope it will be. And the crackling is not that impenetrable thing it can be if not cooked properly.

While on holiday on the South Coast of KwaZulu-Natal in late December, he gave me a masterclass in his way of doing it. Even so, when I got back home and tried it myself, I didn’t get it quite right… I had, as he explained when I showed him a photo of the result, not used enough liquid in the pan. Both flesh and crackling came out well, but the bits underneath, well, not so good. Lesson learnt: next time, I’ll use a slightly bigger pan, and more cooking liquid.

So here, for those who, like me, ache to get both elements of a pork belly just right, is Neal’s way of doing it. And that is his cooked pork belly in the main photo… I’ll post mine here for comparison. As you’ll see, the pan below my pork belly is blackened because I used way too little cooking stock and a pan that was too snug a fit for the pork. (It also should not be too much bigger than the joint, though, as the stock will then just spread out and burn away.)

Neal’s way with pork belly begins (after you’ve cleaned and patted dry the entire joint on all sides) with scoring the rind using a very sharp knife. I should explain that Neal has a thing about knives. They must be so sharp that if you gently touch your finger to the blade you will draw blood. Which you don’t do if you know how sharp his knives are.

He scores the rind in a diamond pattern, rather tightly. Then, he salts it well, and leaves it for half an hour for the salt to extract some of the moisture within the skin/rind. (Just as you do with slices of brinjal to draw out the bitter juices.)

Then, he gets wads of kitchen paper and pats it all over for a few minutes to mop up as much of the extracted liquid as possible. So, in one pre-cook step, you have already pushed the upper skin closer to the perfect crackling you’re looking for.

Then he salts it again, because the mopping up of the juices has also removed a lot of the salt.

He had preheated the oven to its highest heat; on this particular oven that was 240℃, on the fan setting for extra vooma. It went into the hot oven in a glass oven dish which was able to hold the belly while leaving about a 3 cm gap on all sides. This turned out to be important as the second cooking stage would involve adding a cooking stock and other goodies, and the slightly bigger pan allowed space for that.

It was blasted in that 240℃ oven for 30 minutes while he kept an eye on it, because it’s the eye first, and the tip of a finger second, which decides when you’re happy that it’s time to move on to the next stage. He asked me to prod it too, and there it was, that perfect crackle.

But this is where things can fall apart if you just carry on roasting it… the crackling will be okay, or it could overcook and burn; and you can put money on the pork flesh becoming dried out.

So, while it has been in the oven getting that crackling crackling nicely, he had put a pot on the stove with lots of cider and a splash of apple cider vinegar with a cinnamon stick and aniseed. A bit of salt and pepper too. Quantity? Well, it needed to be enough cooking stock to be poured around the joint to just below the crackling, so that’s how you’ll need to measure it: with your eye on the roasting pan measured against the liquid you have in your pot.

The joint was removed from the oven and taken out of its pan, and in went sliced apples, slices of fresh ginger, garlic and slices of red onion. The belly was put on top of this.

The simmered stock of cider, apple cider vinegar, cinnamon and aniseed was then carefully poured around the pork belly, never touching the top. Then it was back into the oven which he turned down to 150℃, for a good two hours. For the last lap of the cook, he blasted the oven back up to 220 just to give the crackling a bit more pep.

It worked. Perfectly. The meat was utterly succulent and moist, the crackling had retained its crunchy wonderfulness.

I doff my cap to the man and I’ll get it right yet.

If you have your own way to get perfect crackling and also perfectly moist pork meat, please share it with me at [email protected] and add to the conversation. DM/TGIFood