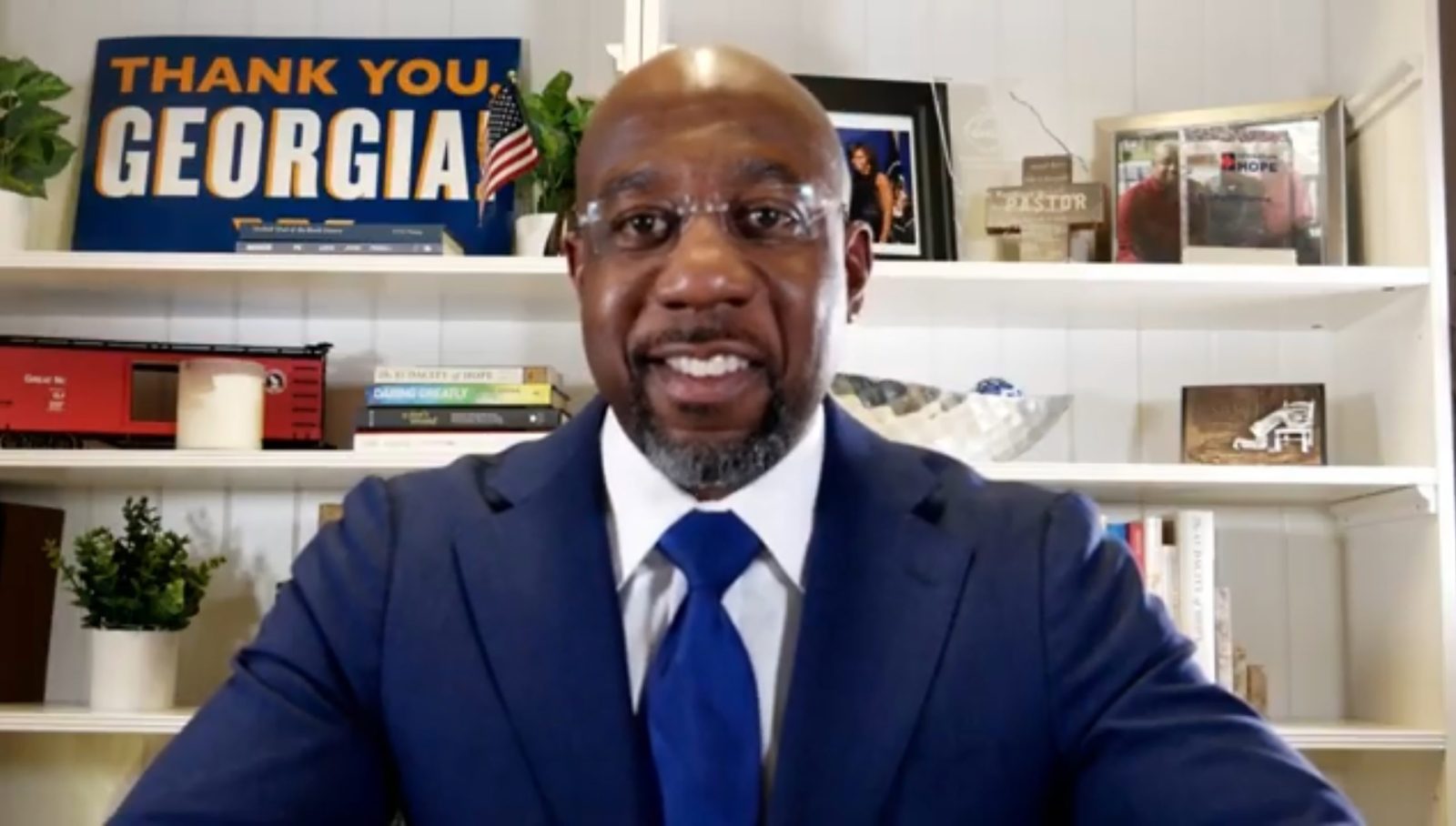 A video grab shows US Democratic Senate candidate Rev. Raphael Warnock speaking via his YouTube channel after midnight as votes continue to be counted in Atlanta, Georgia, USA, 06 January 2021. Republican Senator David Perdue is running against Democrat Jon Ossoff and Republican Senator Kelly Loeffler is running against Democrat Rev. Raphael Warnock in the 05 January 2021 runoff election. EPA-EFE/RAPHAEL WARNOCK VIA YOUTUBE EDITORIAL USE ONLY, NO SALES

Democrats’ hopes of taking control of the U.S. Senate hung in the balance early Wednesday after the party captured one seat in the Georgia runoff elections and waited on the outcome of another race that remained too close to call.

To secure a narrow majority, Democrats need to win both Senate seats, which would split the chamber 50-50 between Republicans and the Democratic caucus, with Vice President-elect Kamala Harris casting tie-breaking votes.

Democrat Raphael Warnock defeated Republican Senator Kelly Loeffler in one of the runoff races, the Associated Press reported Wednesday, while Republican Senator David Perdue and Democrat Jon Ossoff were locked in a dead heat with some absentee votes yet to be counted and as many as 17,000 military and overseas ballots due by Friday.

The uncertainty about Senate control comes as Congress meets in a joint session on Wednesday to count Electoral College votes that will ratify President-elect Joe Biden’s win, even as President Donald Trump urged Vice President Mike Pence and lawmakers to overturn the results based on baseless claims of a “rigged” election.

Benchmark 10-year U.S. Treasury yields rose past 1% for the first time since March and S&P 500 futures pared earlier declines as traders evaluated the implications of a potential Democratic control of the Senate, such as additional fiscal stimulus and tax hikes. Nasdaq 100 futures tumbled, a sign of concern about the possibility of stepped up antitrust scrutiny of internet giants under a so-called “blue wave.”

In Georgia, Republicans began pointing fingers at Trump for damaging their chances as they confronted the possibility that Democrats could win both races.

With Loeffler’s loss, Republicans must hold on to the other Georgia Senate seat to preserve their hold on the chamber and be able to thwart Biden’s agenda and cabinet nominees. It could take days to determine the final outcome, and the narrow victory margins will almost certainly spark legal challenges or recounts.

But GOP state officials were grim.

Warnock declared victory, becoming Georgia’s first Black senator, and noted that his mother, 82, had picked “someone else’s cotton before picking her youngest son to be a United States senator.”

“Georgia, I am honored by the faith you have shown in me and I promise you this tonight: I am going to the Senate to work for all of Georgia, no matter who you cast your vote for in this election,” he said, echoing Biden’s bipartisan tone.

Warnock, 51, is the senior pastor at Ebenezer Baptist Church in Atlanta, the position once held by Martin Luther King Jr.

Loeffler showed no sign of conceding. “There are a lot of votes out there, as y’all know,” she told supporters. “And we have a path to victory and we’re staying on it.”

The race bounced back and forth between the Republicans and Democrats all evening, reminiscent of the November election, which Trump appeared to be winning early in the night before Biden ultimately won with about 12,000 more votes out of 5 million cast.

Trump challenged the results as Democrats gained ground and votes were still being counted. He tweeted that “they are setting up a big ‘voter dump’ against the Republican candidates,” and that Democrats “just happened to have found another 4,000 ballots from Fulton County,” which includes the Democratic city of Atlanta.

The president will continue his attack on the Georgia elections as well as his own defeat on Wednesday, when he plans to speak to supporters in Washington. Hours later, some Republican members of Congress will turn what is usually a formality to ratify Biden’s Electoral College victory into a lengthy, but unconstitutional, attempt to overturn it. Both Loeffler and Perdue backed this effort.

Republicans needed a strong turnout of voters on Tuesday to overcome an expected Democratic advantage in early and mail-in ballots. That may have been hampered by Trump’s false insistence that the results in Georgia in November were so tainted that they needed to be thrown out. Loeffler and Perdue issued a rare statement in the late afternoon pleading with their supporters to go to the polls before they closed.

Sterling, who has aggressively refuted Trump’s unfounded claims of fraud, blamed the outgoing president for the GOP defeat.

“When you tell people your vote doesn’t count and has been stolen and people start to believe that – and then you go to the two senators and tell them to ask the secretary of state to resign and trigger a civil war inside the Republican Party when you need Republicans to unite, all of that stems from his decision-making since the Nov. 3rd election,” Sterling said.

Fighting for party control of the Senate made the races important enough. But against the backdrop of Trump’s baseless claims of vote fraud and corruption by Georgia elections officials — topped by his extraordinary hour-long phone call demanding that officials “find” enough votes to overturn the presidential election — the races also became a test of Trump’s continued hold on the GOP.

If Perdue manages to pull out a win, Biden would face a still-GOP-controlled Senate largely unwilling to back many of his plans to develop a federal response to controlling the coronavirus pandemic, deliver more economic stimulus, or raise taxes on corporations and the wealthy.

Perdue, 71, a first-term Republican senator and former corporate executive, ran against Ossoff, 33, a documentary filmmaker who gained national attention in a 2017 special election for an Atlanta-area House seat.

Interest in the races was intense, with record-setting early vote turnout for a runoff and spending of more than $700 million, including spending for the general election as well as the runoff.

White voters opted for Loeffler with 72% and Perdue with 73%, according to AP VoteCast, a phone and online survey of more than 2,700 verified Georgia voters conducted over the past eight days. Black voters, who made up almost a third of the electorate, went overwhelmingly for Ossoff, 94%, and Warnock, 93%. Latino voters went for Ossoff with 55% and Warnock with 57%, the survey showed.

Perdue and Loeffler, and Ossoff and Warnock, essentially ran as party tickets in their unprecedented all-or-nothing runoff, with good reason. History suggested they would be joined at the hip in the eyes of voters, anyhow.

In almost every way, Perdue’s and Loeffler’s calculations were to stick tightly to the president, or at least not alienate Trump voters and the party’s base. The duo both called for Georgia Secretary of State Brad Raffensperger to resign after he dismissed Trump’s allegations of voter fraud, and both have backed the effort in the Senate to challenge the election results when Congress certifies the November election on Wednesday.

Both Republican senators described their foes as “dangerously radical” and warned Ossoff and Warnock would hand over power in Washington to “socialists” like Senator Bernie Sanders and Representative Alexandria Ocasio-Cortez.

Ossoff and Warnock depicted their wealthy Republican opponents as out-of-touch multimillionaires. Loeffler’s husband, Jeffrey Sprecher, recently became a billionaire and is the chief executive officer of Intercontinental Exchange, the parent company of the New York Stock Exchange. Loeffler co-owns the Atlanta Dreams WNBA team and some players have campaigned against her. DM