Economic headwinds we really do want to avoid in 2021

Economic headwinds we really do want to avoid in 2021

After a dire 2020, there are high hopes for a swift and effective worldwide vaccine rollout, an economic rebound in the second half of the year and a much more festive 2021 New Year than the one we have just had. But several challenges and potential pitfalls lie ahead and only after navigating these will there be cause for celebration.

New Year is traditionally the point in time when most of us are hardwired to wipe the slate clean and face the next 12 months as optimistically and hopefully as possible.

The transition to 2021 was no different, notwithstanding spiralling rates of infections; new, more infectious Covid variants coming to light and severely curtailed festivities as successive lockdowns were put in place.

In just the first few days of this year, however, expectations of a better year have already begun to fizzle out, with the realisation that in many ways 2021 could turn out to be even more challenging than 2020.

Stock markets in the East and then Europe started off the first trading day of the year on a buoyant note, propelled higher by the prospect of vaccinations paving the way for an economic upturn in the second half of the year. By the end of the US trading day, however, a sense of grim reality had set in about what could be expected in the months to come and stock markets ended in the red.

World-weary after an extraordinary year, widespread recognition is emerging of just what is at stake this year and how much economic ground we need to win back after the losses inflicted by the pandemic.

So, what are the biggest worries this year – the economic headwinds that could see the global economy career off course?

Predictions abound of a forceful rebound, a full economic restart and a world economy lifted high this year. There is a recognition that this may only be after a tricky first half of the year, during which the speed and success of the vaccine rollout will set the pace for economic recoveries in different countries.

That means growth forecasts remain subject to significant uncertainty and should widespread vaccination not be achieved by mid-year these bullish growth assumptions could well prove unachievable.

What are the latest forecasts for economic growth? Globally, IHS Markit expects the world economy to put in a better performance than was generally expected towards the end of last year, namely 4.6% versus 4.2% cited by the World Bank late last year.

In its 2021 Global Outlook, BlackRock warns that a resurgence of virus cases could result in outright economic contractions in the US and Europe. On the flip side: “Positive vaccine news is a game-changer in that we now know we are building a bridge to somewhere, providing clarity for policymakers, companies and markets about getting to a post-Covid stage.”

South Africa starts the year on a precarious note, with difficulties in securing vaccine supplies likely to push back a possible economic recovery by at least six months. Unless government and private sector lobbyists do manage to get their hands on vaccines by February, as announced this week, the vaccine rollout is likely to get going in earnest only in the second quarter of the year. That would have dire consequences for an economy already deep in the red.

Should economic outcomes end up overshooting expectations, however, the world could face the other worrying headwind that has been on the minds of economists and investors for the past few months – the return of inflation.

In the Bank of America’s latest Global Fund Manager Survey, respondents cited inflation, after Covid-19, as the biggest tail risk, as shown in the graph below. 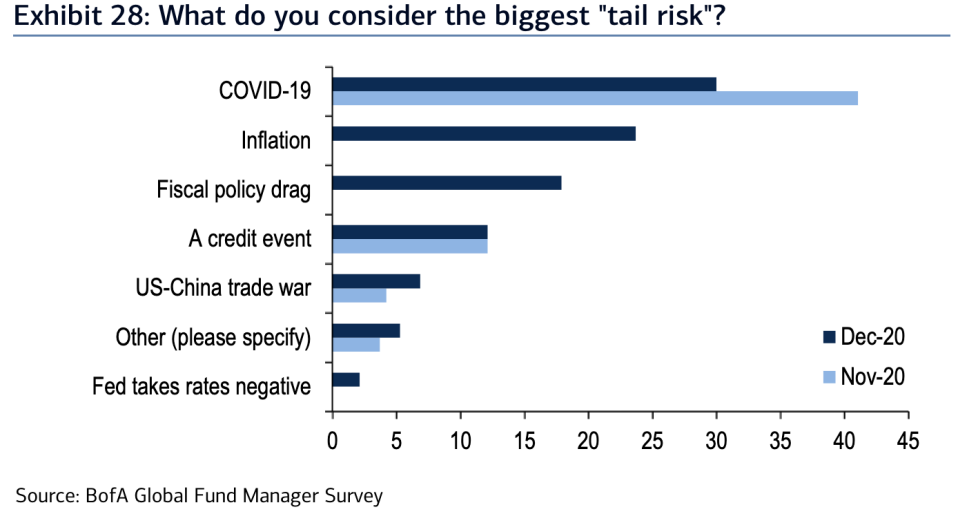 Investors are increasingly factoring in the possibility that inflation could show its face again, with the five-year forward inflation expectation rate published by the St Louis Fed highlighting the steady increase to above 2% from a low of almost 0.8% in March 2019.

Schroders’ chief economist and strategist, Keith Wade, explains that the rapid growth in US money supply – 25% – and its fast rate on record in the US, rising commodity prices, and oil prices around $50 versus $30 in May, are behind fears of a return of inflation. He says these concerns are reflected in inflation-linked securities, with the 10-year US breakeven inflation rate just short of 2%, compared with 0.5% last March.

Apart from the policy and fundamental economic consequences of a reappearance of inflation, Wade points out that inflation would undermine equity market valuations “which currently presume, not unreasonably, that very low, near-zero interest rates will persist almost indefinitely”.

Central banks would come under pressure to tighten monetary policy and, inevitably, raise interest rates. Wade says that with bond markets pricing in higher rates and investors reassessing stock valuations, there would be a period of financial volatility, and equity and bond markets would probably sell-off.

Fears about inflation are a keen reminder of how dependent the financial markets and global economy are on policy multitrillion-dollar stimulus measures – a situation that is unlikely to change for years to come.

As such, any circumstances that put pressure on either central banks or governments to start withdrawing fiscal or monetary accommodation would have dire consequences, particularly in an environment of ongoing geopolitical, health and economic uncertainty.

Some economists are forewarning the consequences of the US Federal Reserve triggering another taper tantrum, à la 2013. Robin Brooks, chief economist at the Institute of International Finance, broached the possibility of a simultaneous sell-off in asset classes if the global economy does rebound on the back of a successful rollout of vaccines in the US. He tweeted: “Once we’re vaccinated, 2021 will feel like the 2013 ‘taper tantrum’.”

Schroders’ Wade also brings up memories of the 2013 taper tantrum, when the Fed indicated it would scale back asset purchases, as a reminder of what could happen if policy becomes more hawkish. At that time, US Treasury yields shot up, equities sold off and emerging market assets were caught in the crossfire.

Against the backdrop of these potentially derailing headwinds, it is clearly evident that 2021 and beyond is unlikely to be smooth sailing, whether or not we are successful in containing the virus.

The best we can hope for is that forewarned does indeed enable policymakers and investors to be forearmed – allowing them to carefully navigate through the still uncharted territory for as far as the eyes can see to calmer water. DM/BM